Sound is a form of energy that creates the feeling of hearing. Sound exists in wavelengths and can be transmitted through all three states of matter before reaching our ears to leave an audio effect on us. Humans can hear sound waves with frequencies between 20 Hz and 20 kHz, and the frequencies can be adjusted to even have selective hearing to certain people or animals. Sound can be manipulated to create music.

The most basic usage of sound in society is communication. Starting from the lungs, humans can generate vibrations through the air past our vocal cords to create sound in the form of speech, singing, crying, laughing and such. Humans make use of sound to create communication alongside writing and gestures. Sound has also been used to create music, either via the human voice such as singing, or via instruments to by producing vibrations in sound tuned to something pleasant to one’s audio senses.

Sound is always around, but to appreciate it, one must learn to listen. Like any other art form, sound requires one to actively observe to gain an appreciation for it. By manipulation of sound, we can create sensations that make invoke different emotions similar to observing literature or art performed on physical mediums. Before the 1990s sound art was a type of experimental music and before “sound art” was made a term, sound art was even viewed as an extension of written poetry rather than an art of sound.

Sound art used to be created by voice and instruments performed, but now with advanced audio technology we have recordings of sound, convenient playback of sound, even editing of sound. But however, even though technology has made sound art more commonplace and more easily accessible, it has also made sound art too easily taken for granted. One just needs to press the play button on a device to hear the recorded and edited audio which may have taken a long time to create, yet not appreciated in the least, unlike going to an orchestra in the past. Audio technology may have dulled our acknowledgement for the sound arts, unless one truly sits down to listen, and to understand and appreciate it.

Barthes aims to investigate the meaning of the image, how it portrays a message instead of being merely an analogical representation. He wants to know; how does meaning get into an image? Where does it end and what lies beyond the image?

In an image there are three messages: the linguistic message, the iconic message, and the literal message.

Linguistic messages are denotational and connotational, and can be extracted by breaking down words used to further extract meaning; these are generally found with the captions or labels on an image. The iconic message can also be referred to the connotational message; these are not obvious and require some some degree of understanding of the context of the message, as it is usually “coded” to be hidden on first glance. The literal message however, is not hidden, but rather clear and can be considered “non-coded” as the information is presented as is, and it may have symbolism presented in quite the literal sense.

I agree that messages have their denotational and connotational symbols, as information can be held within an image not to be taken literally yet sometimes the choice of the image does give the literal impression of what message is being conveyed. By mixing these coded and non-coded messages, a sense of context is needed to decipher the accurate choice of meaning intended by the author, be it literal or metaphorical.

Provide a brief analysis (200 words) on an advertisement of your choice by using the terms/ concepts proposed by Barthes and discuss the role of text and its relationship with the image in the advertisement. Please include an image the advertisement in your post 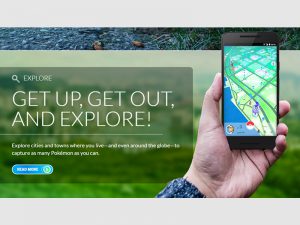 This is an advertisement of Pokémon GO. The linguistic message here involves “Get up, get out, and explore!”; the message supports the agenda of recent Pokémon games that promote people leaving their home and walking around more, with the implied message that the agenda is for players to not stay cooped up in their homes and to find other people to interact with. This iconic message can be derived by observing the trends of more recent Pokémon games where there are an increasing amount of gameplay mechanics previously enhanced, but now even locked to usage of features that involve interaction with other humans.

“Explore cities and towns where you live – and even around the globe – to capture as many Pokémon as you can.” this message is literal as it puts emphasis on the marketing strategy used in from the early days of Pokémon: to go out and capture all 151 Pokémon to be the Pokémon master. This is also contextually correct as an linguistic message as Pokémon GO is an application that involves the user travelling to interact with Pokémon to attempt to catch them. Different towns and regions have different spawn rates for Pokémon which explains the part to explore various cities and towns to aid collecting the various different Pokémon; furthermore there are certain Pokémon that are region locked, and users can only collect them by actually travelling around the world. Therefore I believe through looking at the three layers of messages suggested by Barthes contained in a simple advertisement, we can consider and learn a lot more than what meets the eye.