What is generative art? Or rather, what is art? A question that begets the foundation of discussions for creation of art. “What is art?” varies for each individual; to some it is a product of a free reign of intellectualism. While for others, it might be the first step to a constructed discussion of aesthetics and the foundations. Maybe even both even for others.

But moving deeper than just the broad scope of art, instead of going about the countless theories and form of art, here we explore a certain focus of arts known as generative art. As the article explains, “Art created by means of an apparently autonomous system or process is most frequently referred to as generative art, a realm of digital art practice that has boomed since the start of the 21st century. In fact, the growth of generative digital art has been so robust that, for many people, generative art and computer art have become synonymous terms. In this chapter I hope to show that generative computer art is in fact a subset of the larger field of generative art. It will be seen that generative art can leverage virtually any kind of system, not just computers, and that it in fact is as old as art itself.”

So, what actually defines generative art? To answer this we need to return to the initial topic of “what is art?”. Being a form of art, to answer the definition we need to have a solid understanding of the purposes and function of art, where it comes from and how it is explored. The author of the reading hence gives their definition:

“Generative art refers to any art practice in which the artist uses a system, such as a set of natural language rules, a computer program, a machine, or other procedural invention, that is set into motion with some degree of autonomy, thereby contributing to or resulting in a completed work of art.”
(Galanter 2003)

The idea of generative art would be as explained earlier, through some sort of system a result is created outside the manual control of a human, normally through some sort of automation. However, this initial definition is not I something I would agree with since it’s vague and does not give enough focus onto the idea that it is a work of the system, rather than an assisted work done by the artist. To my delight, the author did create an updated version of the definition several years later:

“Generative art refers to any art practice in which the artist cedes control to a system with functional autonomy that contributes to, or results in, a completed work of art. Systems may include natural language instructions, biological or chemical processes, computer programs, machines, self-organizing materials, mathematical operations, and other procedural inventions. ”
(Galanter 2008)

This definition is clearer on what I agree to be a definition of generative art; control relinquished by the artist to the system, to let the system run on their own creating a wider array of possibilities, limited by what the artist defines beforehand, unlike the previous definition which implied a system that the artist is able to use as a tool restricting their own undesired effects.

Next, the reading explores the idea of complexity in generative art and how it grows. Generative art can be both highly ordered as well as highly disordered, as with the nature of an artist giving control to a system, they can decide how much control to give, as ultimately not all end results are favourable, but highly dependent on the type of art being made. In some sense you can even say if your supposedly chaotic looking generative result out of sheer randomness creates very neat and orderly straight lines, even if you are willing to accept whatever result it would give you, this might still give you doubts. After all, if your generative art doesn’t look generative at all, would you still present it as generative art?

How does this mean anything in my work however? In the process of a game where the final result is not meant to be fixed, there are many techniques I can pick up to define how the final product could be, whether it is depending say a certain level of growth into the work, or applying restrictions. As an artist I am ceding control to the generative art system. I set the rules but I don’t decide the final product, directly. From a gameplay point of view, there are several paths to consider; should I want a very direct non-linear narrative, it is possible to setup enough restrictions in a generative system that no matter how it varies, the final product will be the same. Or I can make it that due to how much it can branch out, having two identical results is extremely unlikely. Simple examples would include Solitaire; each game can have a varied amount of progress but the final product is almost always the same. But that is not always bad, a game of solitaire with a varying finish state would simply not be the same game, and might not give as much as a desirable effect as solitaire as is afterall. To take away from this, as an artist I choose what freedom the system has, and what choice I make should factor from my intentions, leading back to the original question of “what is art?”

To be updated with visuals later
Presentation in class

Following from the previous studies, I have decided to augment the game to suit the generative properties better.

The main difference: Instead of playing cards and removing them, players now play cards which stay on the board permanently.

New cards can be played over old cards, which card create generative patterns which suit the player’s needs in the point of the game, yet opens interesting end results more unique than a mere win/lose. 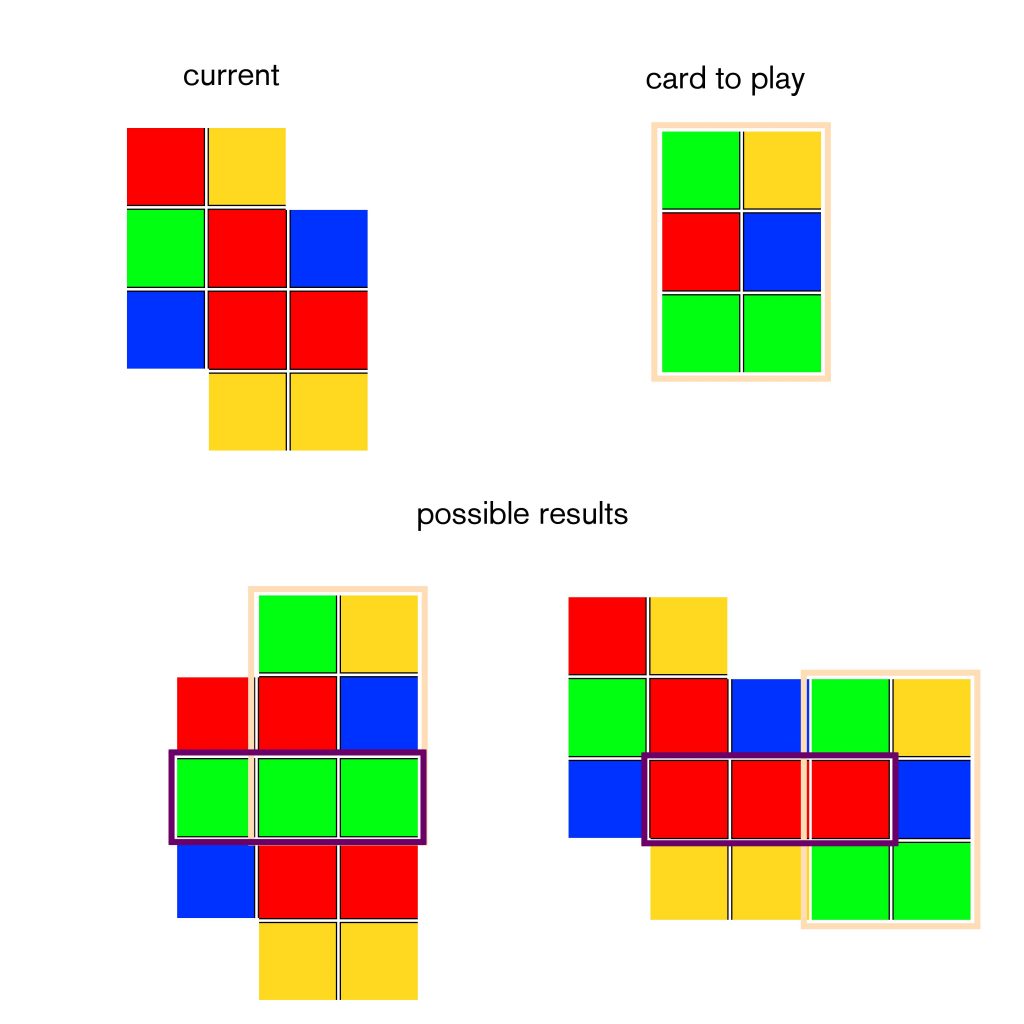 A card would have a 3×2 combination of designs on it. When a player would place a card onto the board, they can play it overlapping or adjacent to their existing board, in attempts to create chains of 3, or more specific patterns as the game goes on. Players have the freedom where they would place their new card, which card result in more interesting board states as shown above.

Topic: Surprise
Some of the aspects to reflect on:
– What constitutes surprise?
– What determines its qualities?
– How surprise figures in different contexts such as the arts, everyday life, technology (e.g. in classical information theory by Claude Shannon), etc.?
– How does it figure in your own life and experience?
– Find out and explore other features of surprise.

Surprise elements can be applied by having unexpected results by betraying expectations set. To do so, first we have to set expectations for the user, then twist the outcome that does not follow the expectations.

Positive Surprises can include low odds of a positive bonus, something a player is aware that they exist, but unlikely enough for them to set an expectation not to get it, for example a low chance of a “critical hit”. Getting something more out of an expectation already made is generally a pleasant surprise. Meanwhile Negative Surprises are the opposite, and in the case of a cautious or pessimistic individual, a negative surprise should be outside any predefined expectations. It has to enter from outside the realm of what a player should be expecting or prepared for. To balance a surprise while not taking away the enjoyment of the game is something to be defined carefully. 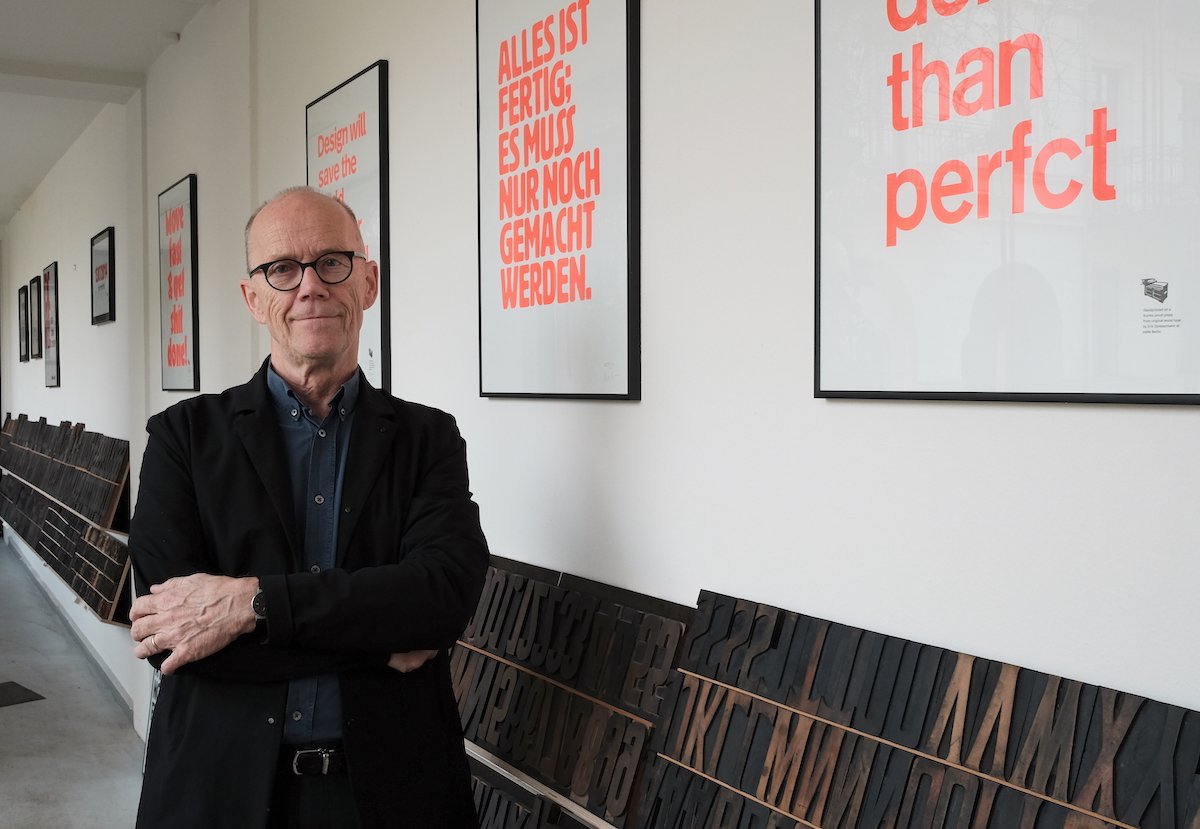 Generative Study of of a deckbuilding card game

As a followup from the previous study,

Simplified Rules:
Gameplay goes in rounds, and they repeat until either the player or the monster is defeated.
In the course of a round, it is further split into 3 stages: Setup Phase, Main Phase, and Cleanup Phase

There are several zones, Your Hand, Your Deck, Your Field, Your Discard, and The Trash, and the respective Shop and Monster Decks. Cards in decks are placed face-down, while the rest have their cards face-up.

In the Setup Phase

In the Main Phase

In the Cleanup Phase 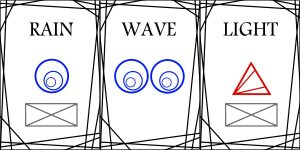 Here there is a trio of blue, so the total damage would be 1.

Repeat the rounds until either player or monster have been defeated. Whenever you need to draw a card while the deck is empty, shuffle the discard pile into the deck.

Gameplay has generative elements due to the player interaction being relevant to affect or control the unreliably generated options as the deck gets shuffled giving new scenarios each time the game is played.

Giving control to the player allows the human interaction element to directly affect the outcome of a game, although they would not have perfect control over what might happen.

Elements such as trashing every other monster, as well as a shop that replaces itself, increase the amount of variation that can happen in a game, creating replayability as well as unpredictability over the flow of games.