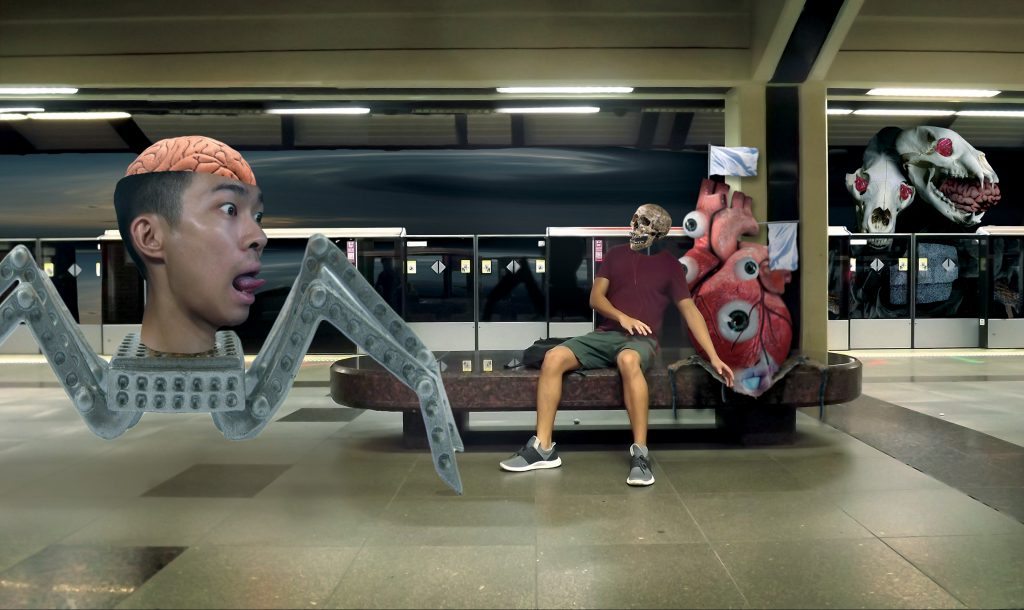 Continuing the story of eternal life, where I met the three characters in this digital world, I was escorted out of the ‘train’ together with four eyes. He looked scared of course, as his feelings manifested on what used to be his body. The owl-faced thing which called himself, The Suit, instructed both of us to take a seat at that nearby bench. He said the other party is arriving soon but no other information was given. What other party? Are there more people joining us? I turned around and immediately get the fright of my life. There stood a creature, resting on what appears to be many metal spider-like legs. Attached to it is my face, except much bigger, with an exposed brain on top with a reaction just like mine.

Mr  Suit then informed us that the other party is from a parallel universe. He further mentioned only one of us can be allowed through this process. Which means one of us has to be killed. What do I do now? Can I take my own life even though it is not really me?

What was the process taken?

From the start, I first focus on world building. What would come next in my story after meeting the three strange characters? After deciding on having a parallel universe where both sides would meet, I set out to take photos. As my world is set in quite a dark environment, I had to take night photography. Photography, in general, is a new area that I do not have experience in. Therefore it was a new learning process for me. I played around with different postures and places that include, close up, mid shots and long shots of myself and the environment. Then I select my choices of photos to be composited into one picture.

How did scale Manipulation and juxtaposing affect the work?

One is a normal sized long shot, and the other is a close-up of the face. Juxtaposing is applied in the form of manipulation of elements for each of the two characters of me. One a large head, and a different body. The other is a full unedited body with a different head. Looking behind the characters, the shadows of the characters are inverted to symbolise the existence of a parallel universe creating the visual paradox.

What were the challenges?

The biggest challenge is taking the photographs themselves. Besides learning how to take photos in a dark environment, I had to time my shots well to avoid any other people inside on the train station platform as shown in one of the pictures above. The other challenge is to use Photoshop itself to manipulate the images since I only have experience in putting rendered products into environments for context purposes. It was a learn on the project process as I discover new functions such as swirl effect on a shot of the sky.

What do I enjoy and what I can improve on?

I enjoy the outcome after compositing them together, to be able to see the final product. Based on the critique, I can work on allowing some action of the spider-head me to show implied movements based on the reaction ”I” was having.