Our Guest Lecturer, Bin, offered an insightful perspective and gave more credible substance to the current-day buzzwords of ‘Artificial Intelligence’ and ‘Machine Learning’ during his lecture presentation.

The lecture was themed with regards to the current-day debate surrounding Man versus Machine. In my opinion, advancing technology cannot be stopped or avoided, and as humans, we should know better than to try doing so. Instead, the logical and natural way would be to embrace and harness the new ‘powers’ gained through scientific and technological efforts to bring the human race and the world around to newer heights. Just as with every preceding technological invention and advancement (ie the Computer, the Internet, radio, television, etc), technology will only be useful if used intelligently, correctly, and for the greater good. Instead of wasting time fearing and avoiding Artificial Intelligence, Machine Learning, and automation, we should spend time understanding, developing, and integrating them into our lives to raise our own standards of living for future generations to come.

The lecture starts off by discussing the ideologies of an Utopian society, a term coined by Thomas Moore, that saw mirroring thoughts in Plato’s Socratic discussion of an ideal Republic, The Great Unity in Confucianism, and Karl Marx’s Utopian Socialism. Through the lecture, I’ve learned that Utopic values of rigidity and uniformity were thought of as ideals to form a perfect society to raise living standards and optimize quality of life.

Personally and quite sadly, I do find hints of these ‘values’ as they seem to resonate with the Singaporean life and government style. With that eerie thought hitting so close to home, I was also reminded of a recent project I came across on my own by the richest man in the world, Jeff Bezos (founder of Amazon), titled “Blue Moon”, where he uses Singapore’s current-day downtown cityscape as a model to capture and identify what a future utopic colony with “innovative architecture” would resemble. Witnessing this image gave me a sense of pride and yet was oddly terrifying at the same time, especially now after going through Bin’s lecture.

As the lecture proceeds to feature and examine artists’ works, there are a few that simply struck a chord with me and left me in wonder. 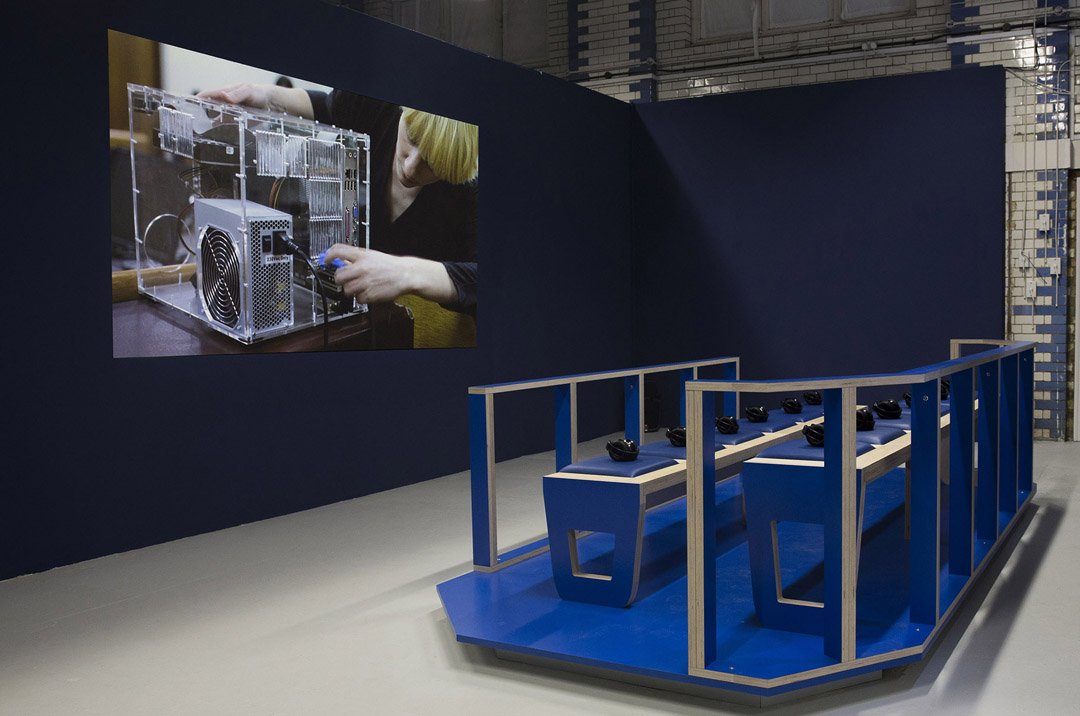 Firstly, artist Helen Knowles’s Superdebtthunderbot. This piece addresses and manifests one of the biggest dilemmas on everyone’s minds in the 21st century: can algorithms and AI be brought to trial and held accountable for their misdeeds and misconduct? For me, this piece was magnificent from concept to realization, as the artist paid close attention to the User Experience of the piece by having it in a jury setting facing a digital screening of a Judge, fully emulating the hypothetical trials of machine. I felt the content intelligently launched an attack on the ethics and moral components clearly lacking in technological advancements, getting people to discuss its repercussions, and hopefully garnering enough support to make significant changes in AI and automation governance.

Subsequently, I felt drawn to Kim Ji-Woon and Yim Pil-Sung’s Doomday Book’s feature of a robot Buddha as I felt it successfully showcased not only the parallel fears of Man versus Machine in both Western and Eastern worlds, but also the drastic difference in perception. In the West, robots are seen as cold, inciteful technological evil, but in the East (or at least in the film), robots can have the capacity to be revered and have human-like qualities.

After being exposed to this showcase, I believe most of the dilemmas or debate surrounding Man versus Machine can be resolved or abated by simply refreshing people’s perception. For example, in the West, common themes of robots overthrowing and competing against Man in powerhouse movies such as Matrix and I, Robot may have shaped pre-conceived perceptions and ideas of AI in the public’s mind. Whereby in the East, abstract intangible concepts of familial ties, filial piety, and religion hold utmost reverence, sometimes question, in people’s hearts and this may parallel their level of understanding of AI and robots, melding the two concepts together. 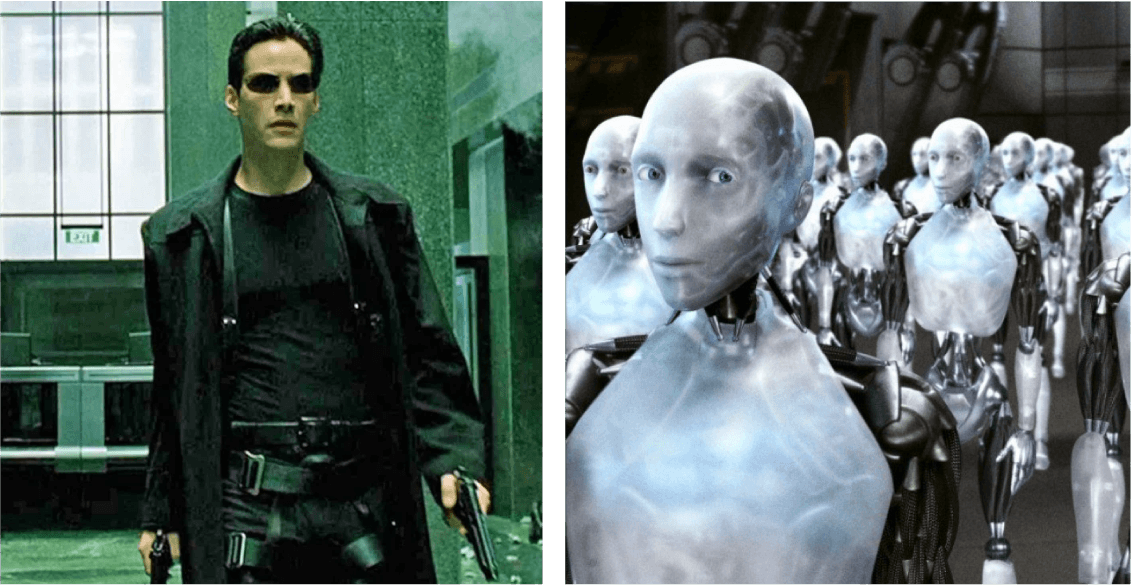 Lastly, Bin’s own piece titled Rescue Operations caught my attention due to it addressing an already long-contested global phenomenon with a highly interesting twist. I felt that the narration of ‘false news’ through textual jargon and nonsense that seemed legitimate to the inattentive ear hits a bullseye on his concept and objective of the piece. This was amazing for me, as such a subtle change-up of execution and ‘simple’ twist manages to elevate the exhibition to a whole new level that leaves a deeper impact and resonance In its viewers.

To end off this reflection on the Guest Lecture, I would like to pose a question to Bin regarding Rescue Operations: In one of the ‘false news’ narration pieces, the text generated saw a constant repetition of 1 phrase only. Even to the inattentive ear, this pattern can sound off alarms to audiences, making them ‘get’ the concept immediately, or perhaps make it too obvious of a twist in concept. Was there a reason why you chose not to re-generate the text or curate the text content to minimize repetition/syntax errors so it may pass off better as a news report? 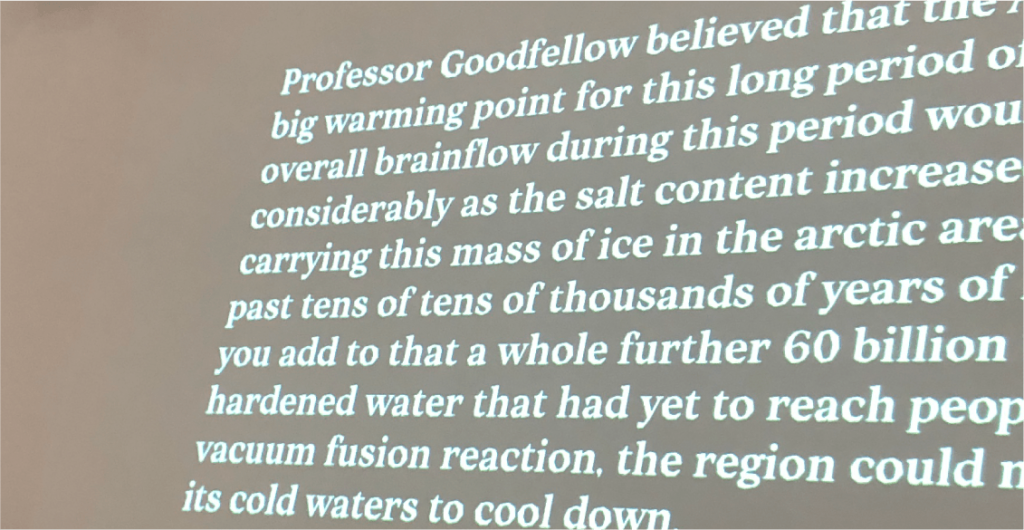 In conclusion, this Guest Lecture was definitely an informative and insightful one. I find myself being exposed to more works addressing Man versus Machine discussions, as well as thinking deeper into ethical, moral, cultural, social boundaries of the technological advancements I clearly support.