For Lecture 2, what piqued my interest the most was the slide on Oracle Bone Scripts.  Desmond told us that in Ancient China, writing was inscribed upon animal bones and turtle shells. These scripts were then pushed through with a hot rod, so that the cracks on the bones could be read and analysed for divinations.

Oracle bone script, 甲骨文, is unequivocally the oldest recognizable Chinese inscription. It is estimated that Oracle Bone scripts were used between 1800-1100 BC, around (and possibly before) the Shang Dynasty period. I find it intriguing that during this period, writing on hard animal bones was so common in China, whilst other places in the world were already using softer (and I would assume, easier to inscribe) materials- For example, Desmond was going through the use of papyrus, parchment and vellum in the previous slides. The earliest use of Papyrus is said to be in Egypt during 3000BC and about 2550-2450 BC for parchment. This difference in hard/soft materials highlights how knowledge was not easily transmittable and shareable in the old days.

Additionally, its really cool how the writings on the Oracle Bone scripts paved the way for the modern Chinese writing we are so familiar with today.  Oracle Bone characters have a pictorial nature, suggesting that they have pictograph origins. However, the characters used in the script are not solely pictographic in function. Instead, they were part of a writing system that was fully functional and mature by the era of the Shang dynasty. Many of the characters were not realistically depicted enough for people who had no prior knowledge to be able to comprehend the script.  Each character had gone through stabilization/abstraction/simplification to functionally represent words, and by extension, concepts. (They were termed as zodiographs by William G. Boltz and Semantographs by Qiu Xigui). Gradually, these characters further evolved to its predecessors- mentioned in the following slides, such as Bronze Ware Script and Seal Script, till our modern day Chinese text.

Some examples of Oracle Bone characters (and its modern counterpart):

Example of an annotated script: 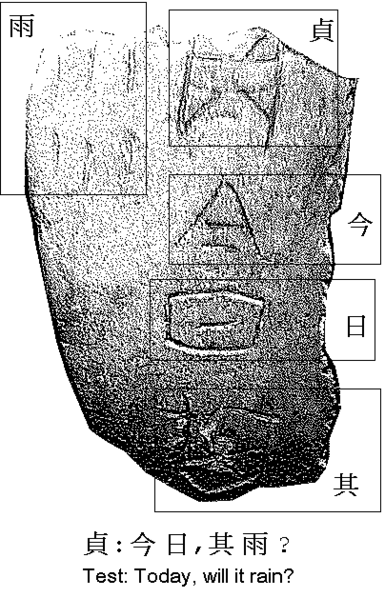 One Reply to “History of Design (Graphic Design) #1”