This series is inspired by the idea of how we see ordinary things and what it means through the eyes of different individuals. A cardboard box is something we normally see on a day to day basis, be it by the street, in a convenience store, etc. These cardboard boxes have a lot of uses and meaning to different people and I wanted to portray their perspectives through my illustrations.

A cardboard box from the point of view of a warehouse is a piece of puzzle. 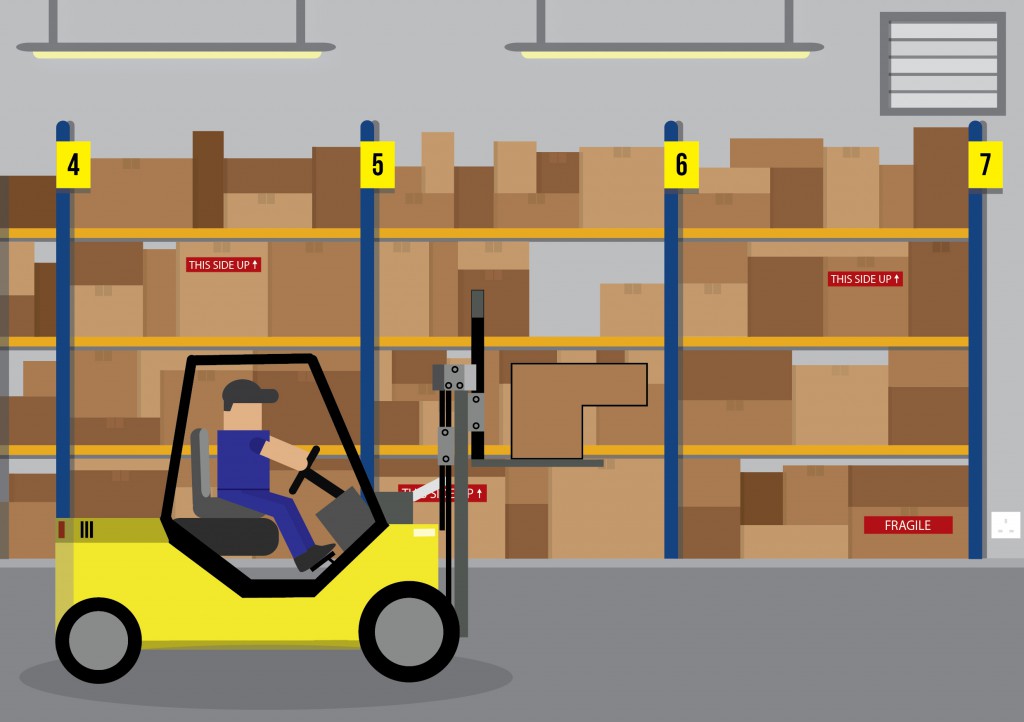 Explanation: This is basically through the eyes of a warehouse where they usually categorise lots of packages and boxes neatly. I wanted to portray the idea of how there will always be a perfect spot for each of these boxes and how they always seem to seamlessly fit into the spaces in between each other.

A cardboard box from the point of view of a child is an imaginative space. 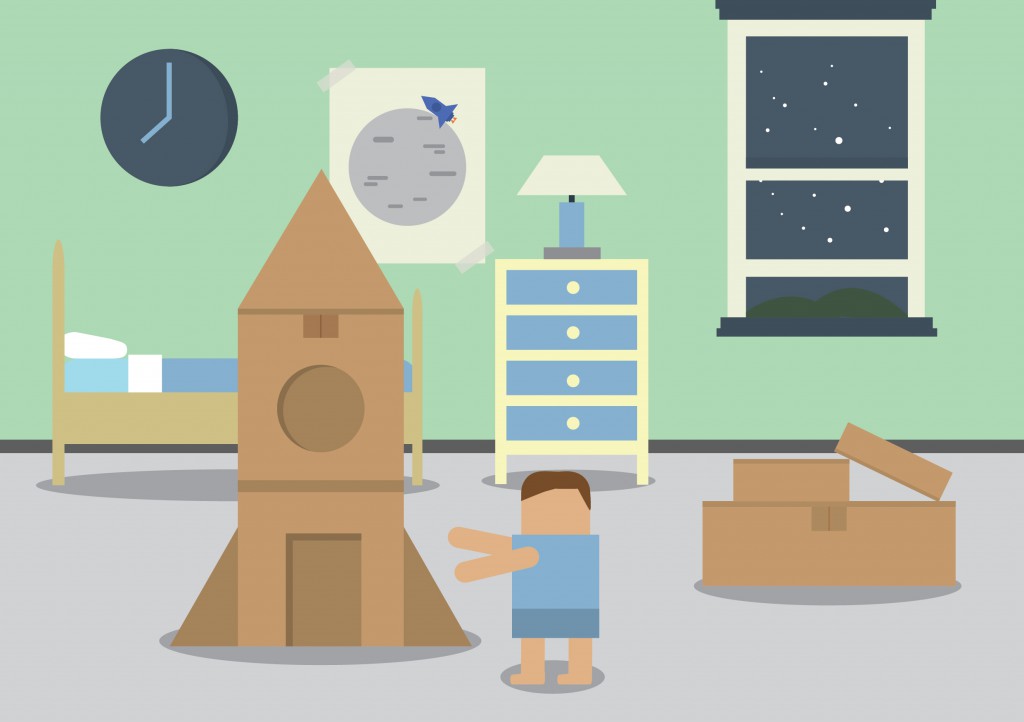 Explanation: This was inspired by how, as a child, even the simplest of things can be an entertainment. A cardboard box to a child, is a whole new world. With their wild imaginations, the idea of using cardboard boxes can literally take them to places.

A cardboard box from the point of view of a cardboard collector is his next rice bowl. 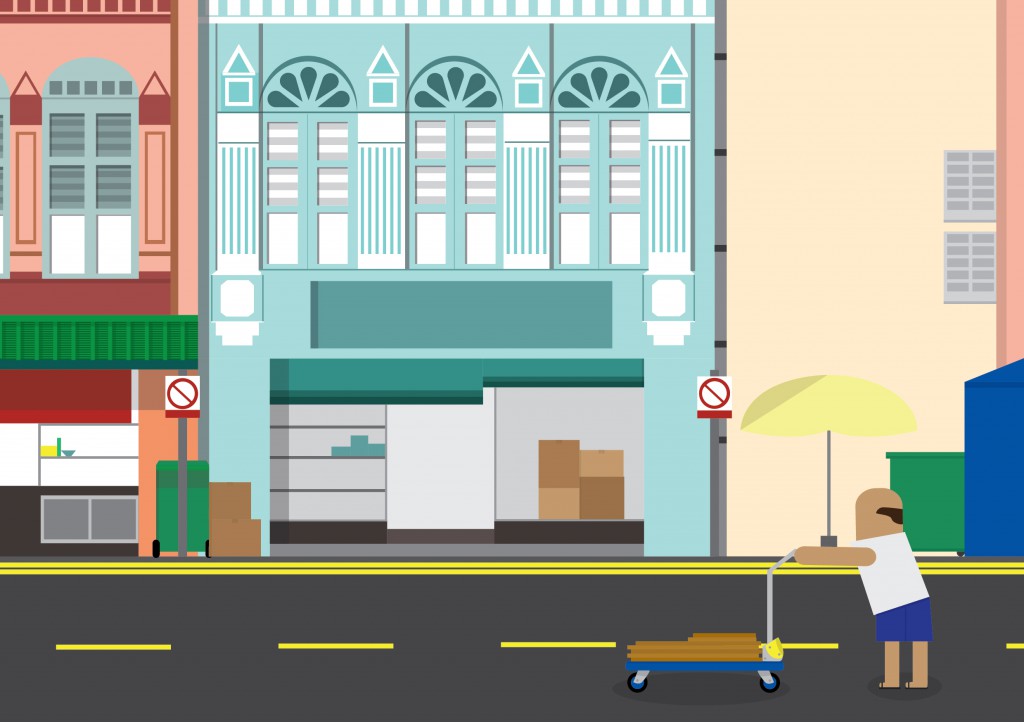 Explanation: A cardboard box to a cardboard collector is a day’s job. In Singapore, it’s very common to see the elderly collecting cardboard boxes just to make a living. The hardwork they go through going to different places, collecting cardboard and flattening them just so they would earn enough to feed themselves is really disheartening. Sometimes we tend to take for granted the things that we deem as trash, but to others, it could mean the world to them.

A cardboard box from the point of view of a cat is temporary solace. 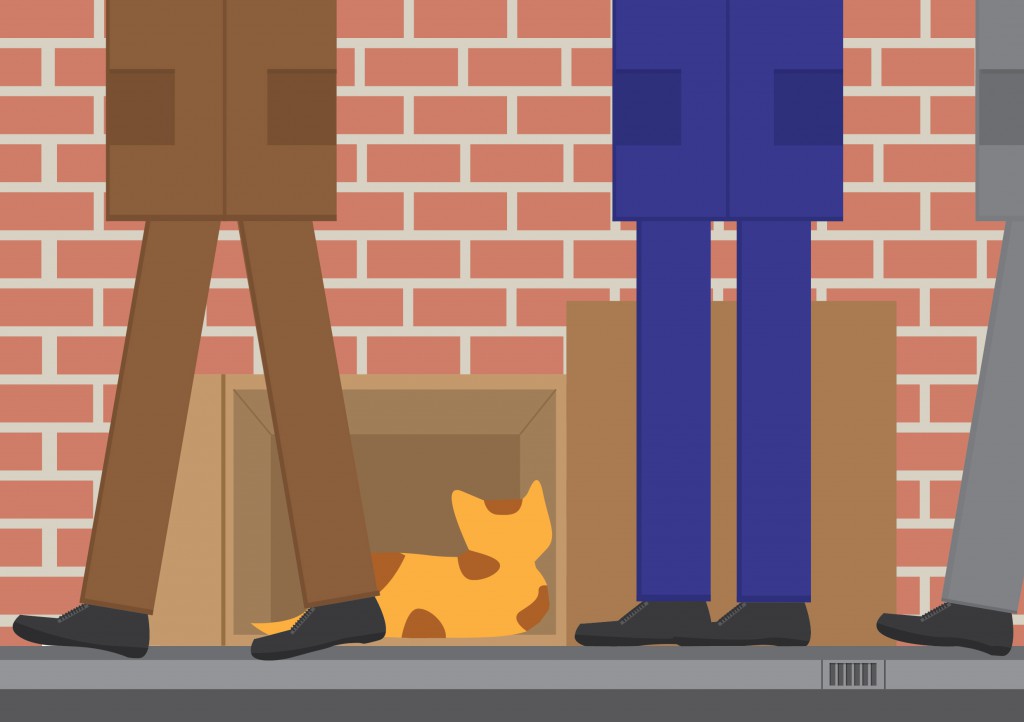 Explanation: This was inspired through a youtube video that showed how cats are content with sitting in a cardboard box, no matter what the size and how many cat toys are surrounding them. I wanted to portray how in the busy world we live in, the constant noise and hectic life, a cardboard box to a cat would mean a temporary place of peace.

A cardboard box from the point of view of a postman is a responsibility. 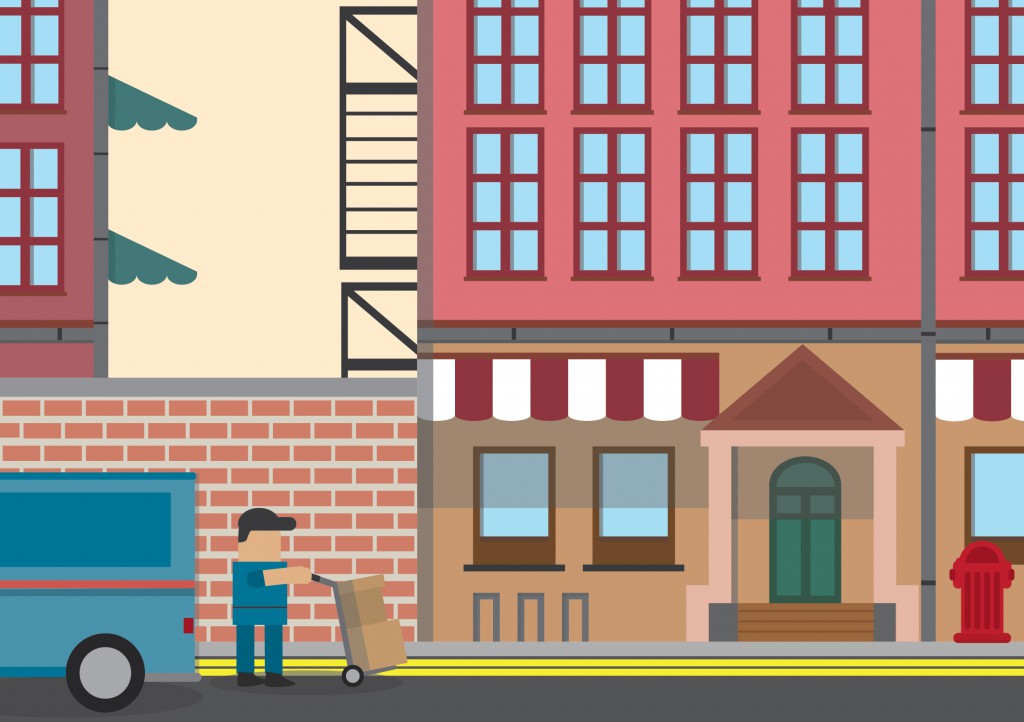 A cardboard box from the point of view of a techie is a visual revolution. 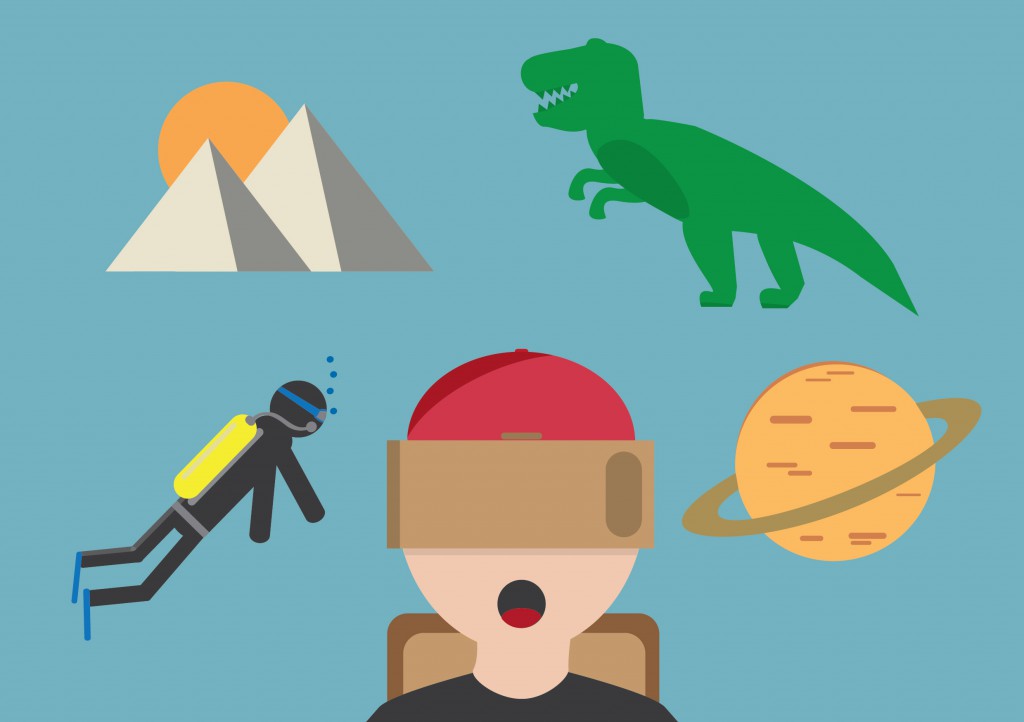 Explanation: Modern technology has changed the way we experience and see things. This was inspired by google cardboard and how it has taken our visual experience to a whole new level. It has allowed humans to be at another place or a different dimension with just a cardboard box. The invention of the google cardboard has revolutionise the way we are able to experience digital media.

This was the some of the process shots I took during the production of some of these compositions. I tried with different ways of producing the composition (with lines and without lines) and see what works for me. It was a tedious task trying to line up the points together and picking the right colours to gel seamlessly. 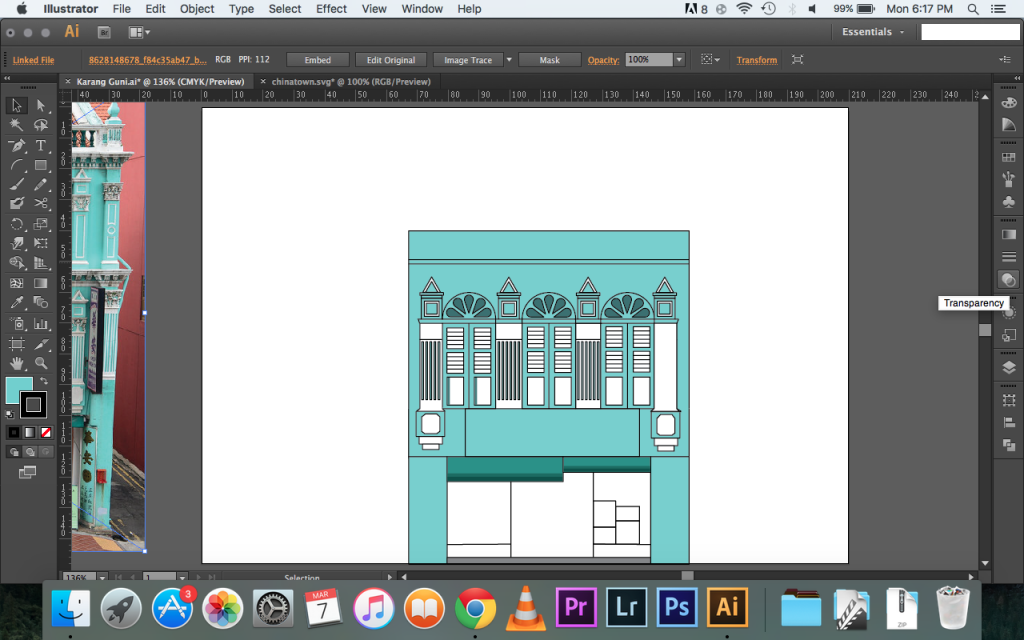 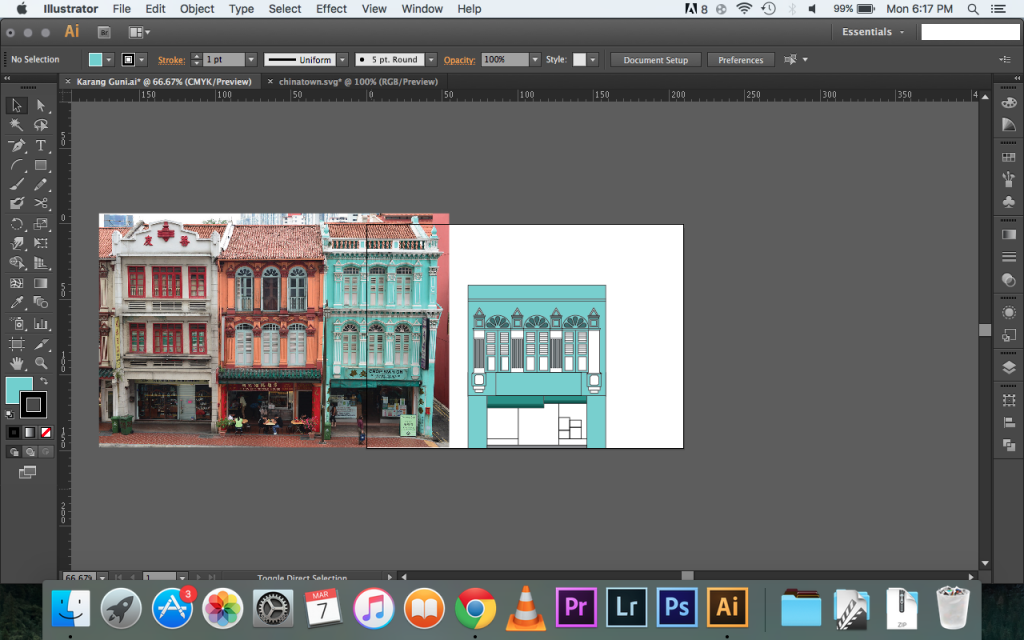 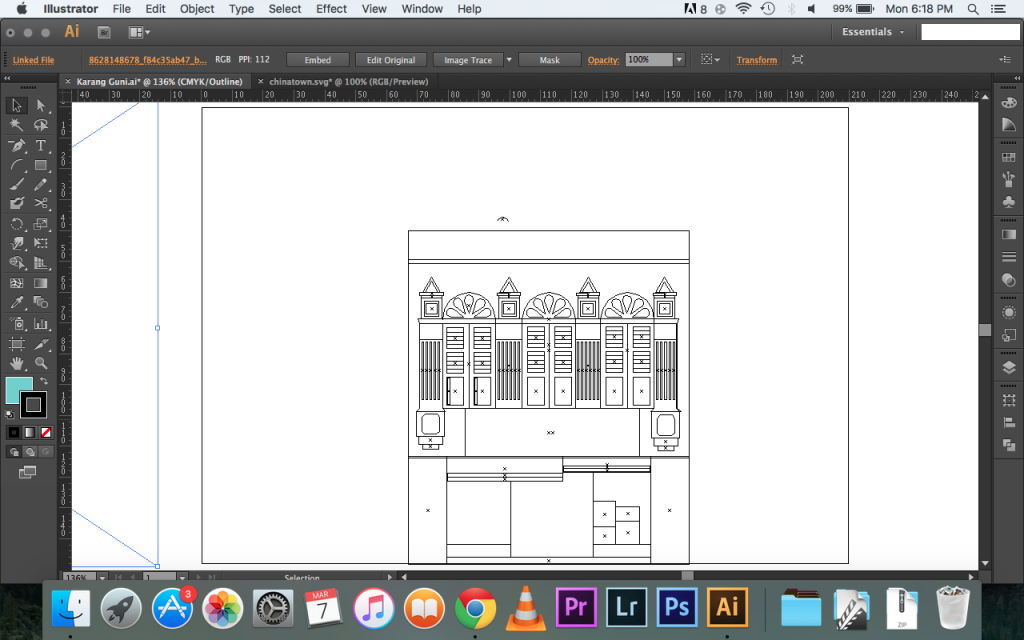 This is the basic outline of the shapes I used before adding colour. 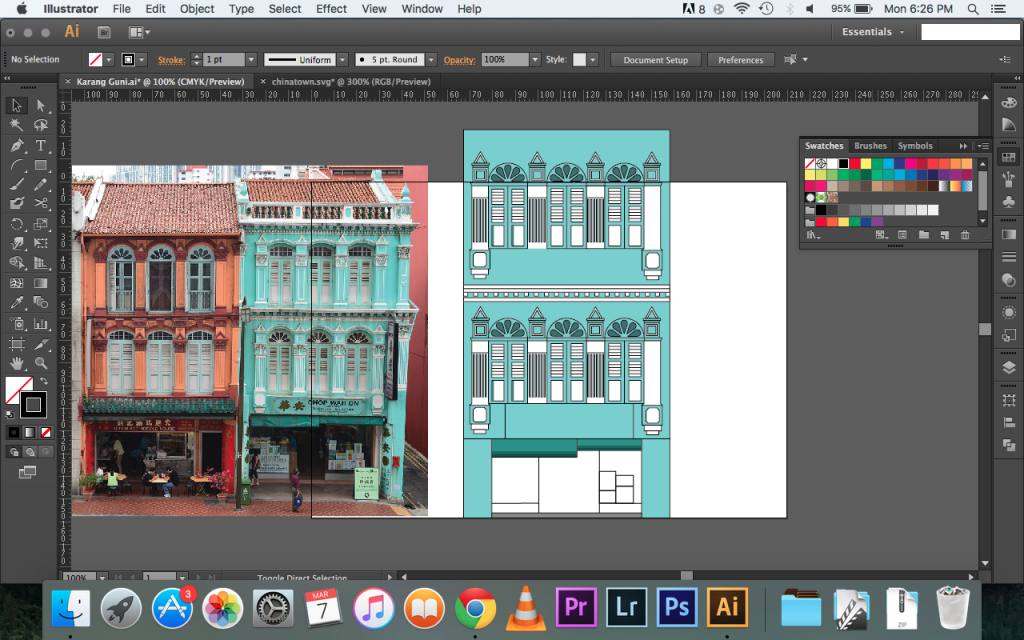 For some of the illustrations, I had to refer to image references off google to get the basic shapes right before adding my own flair to it. 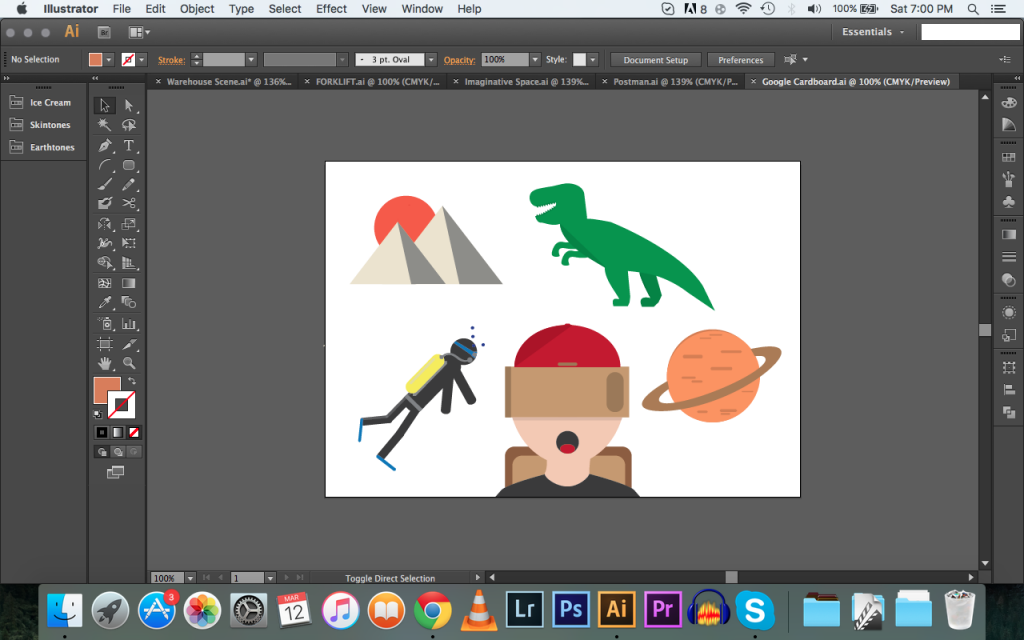 I tried using a different shade of the same colour to achieve the shadow effect, making it look 3-Dimensional but yet showing its flat 2D components. 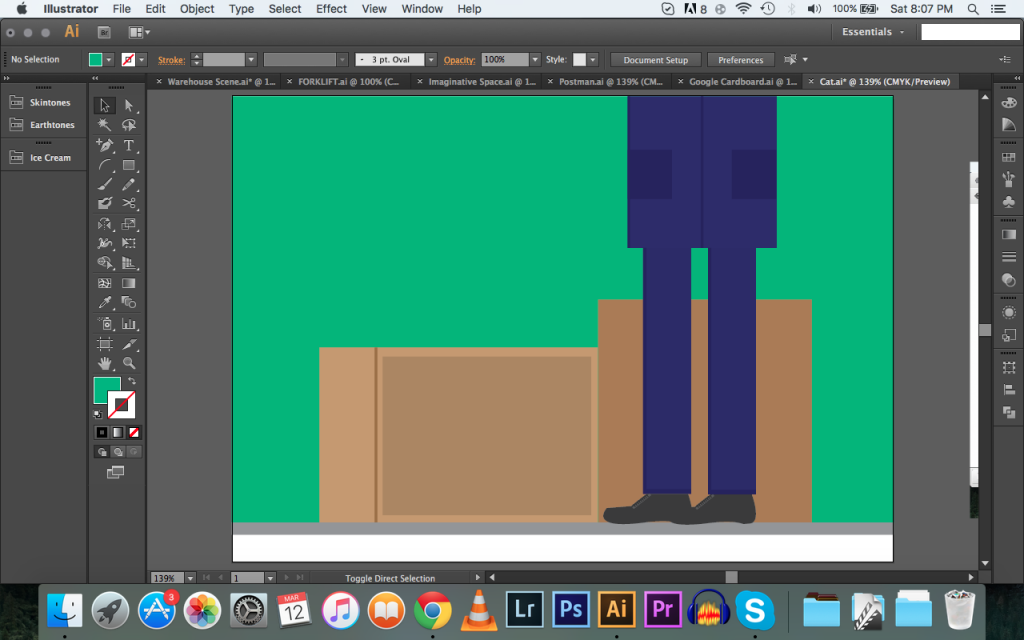 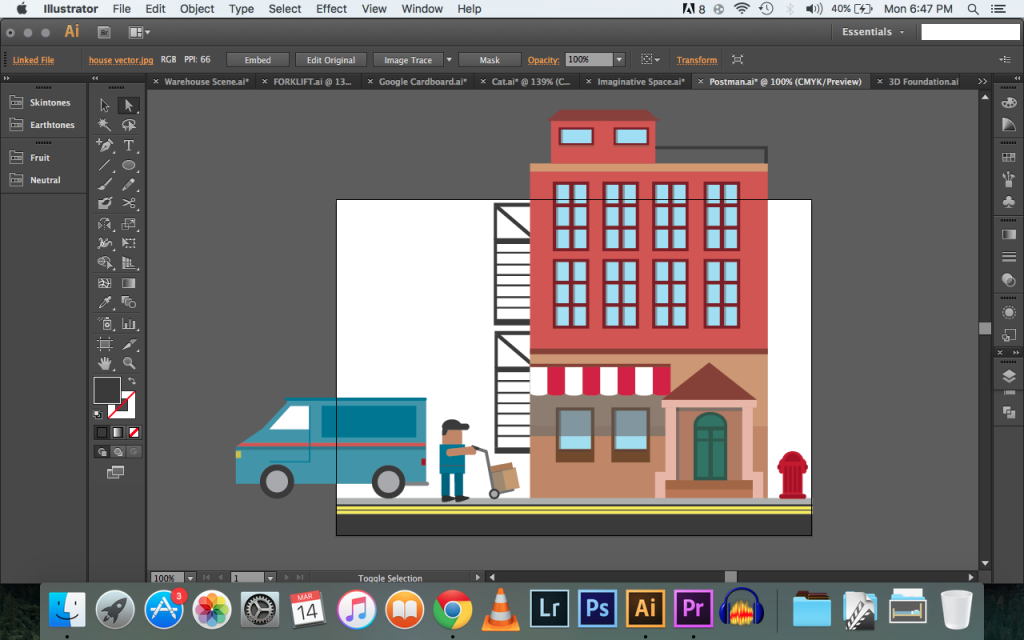 Some of the compositions were made with the whole object involved to get the basic shapes before resizing it down to the main focus of the subject matter and then cropping out what was not needed. 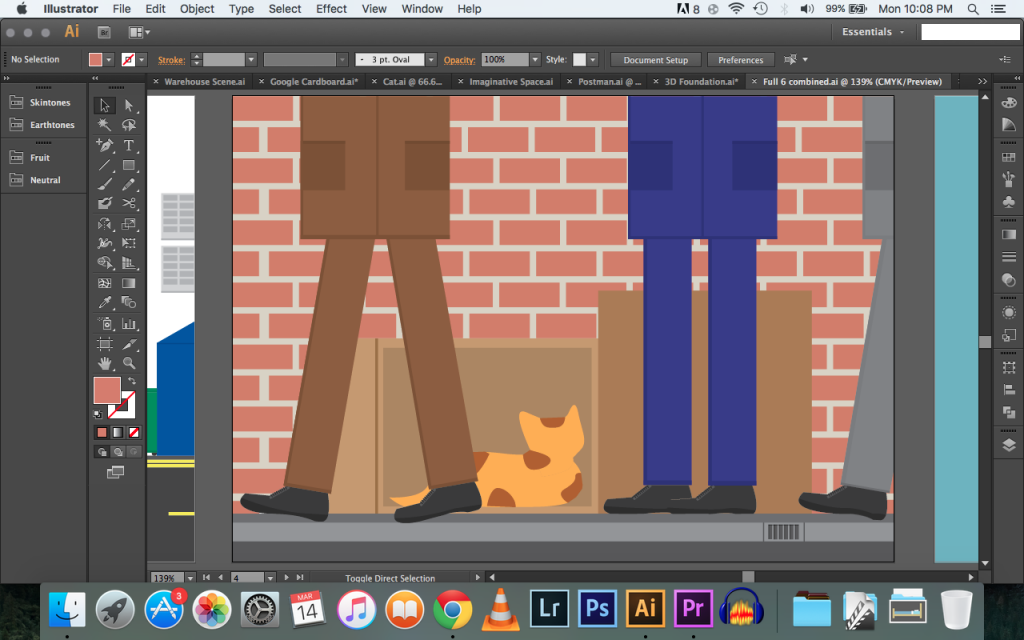 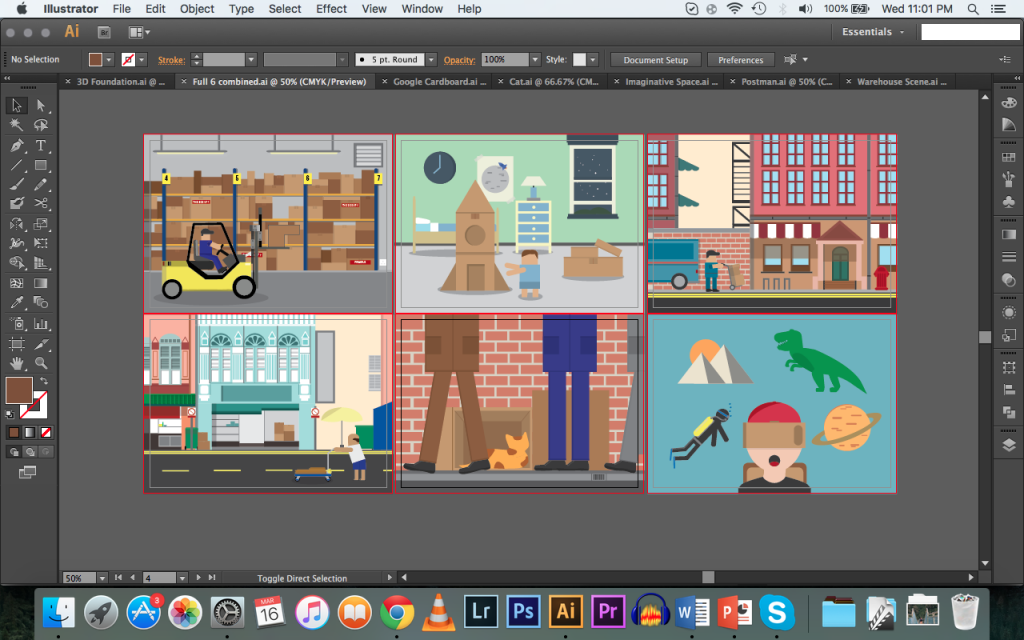 I laid out all the 6 compositions together in the same project to see if the colour theme matches with each other and whether the compositions co-relates with one another. Then, I will do slight changes to individual compositions to match the rest.

I used this website http://www.colourlovers.com/ to get ideas of different colour palettes that works well with each other. It took a while to understand how the colours would work in my composition but I slowly worked it out.

Since it was my first time using Illustrator, it took me a few tries before I managed to slowly ease into the workflow of the software. With the basic knowledge that I had of other Adobe programs, I was able to adapt quickly to the new software. I also had the help of youtube tutorials to overcome some of the basic functions that was needed to create these illustrations.

Overall, I had a good learning experience taking up a new direction in my art journey. Going out of my comfort zone/style and challenging myself with a whole new different way of presenting my work was definitely an enriching experience. I am also glad that I had a lot of encouragement from friends and Joy with my work and I’m definitely looking forward to explore more of vector illustrations in the future. 🙂

We were tasked to create 2 stories from 2 different genres using nothing but only sound effects.

For this project, I chose task 1 as I felt that it gave me more freedom in being able to play around with the different sounds to create the stories that I want to portray.

We were given different genres to create our stories and these are the 2 that I find intriguing to explore and create my story from.

Synopsis: This story begins with a guy in his house, making a cup of coffee. As he sits down and reads his newspaper, an overhead plane crash accompanied with machine guns startled him. He hurries over to the door, knocking the things around the house, to check on the situation. He opens the door and a war breaks out right outside his house. He runs out of his house, avoiding the bullets and shrapnels and falls to the ground. He stands up and continues to run to escape from the war into the forest where he passes out.

Influenced by the movie ‘FURY’

I decided to go for this genre because I am always intrigued by war movies and how they use multiple layers of sound to create a specific battle scene. The time and effort put in to create such a battle scene interests me to challenge myself to try it out.

A more quirky representation of how war is presented through the use of cameras as rifles and how sound is layered to give off this ‘war’ effect. 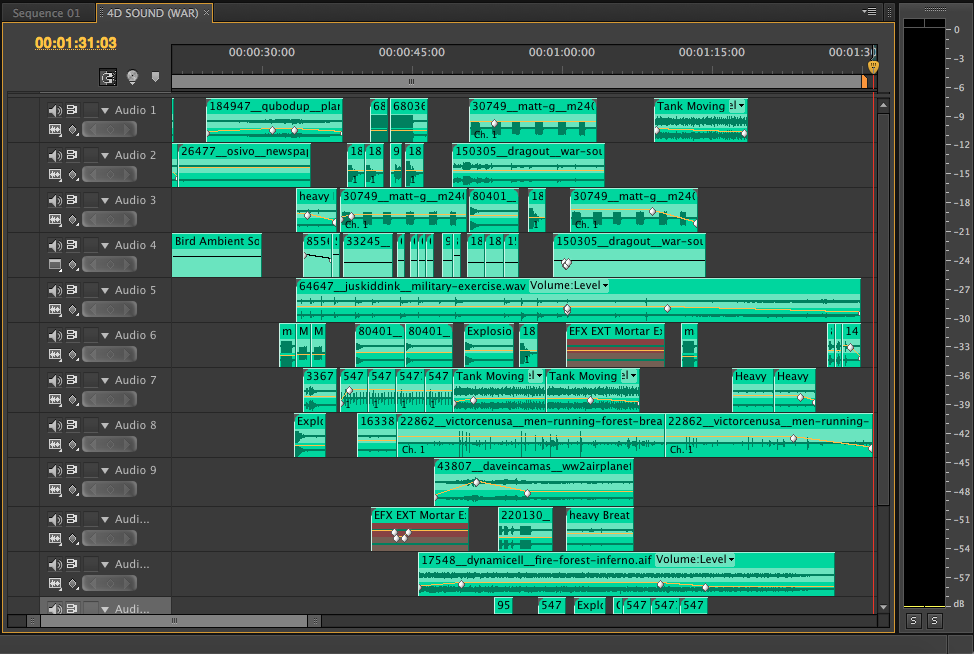 Just for the war scene, it took me multiple layers to achieve the effect. I had to experiment with different types of gunfire, explosions, and the main character running at the same time. After reviewing a couple of times, some of the sounds felt like they did not complement the other sounds and I had to re edit a few parts, removing sounds and adding sounds to the spaces that felt empty. It was a tough process deciphering each different sound as it involves lots of different layers altogether.

Synopsis: The story begins with a guy walking in the forest. As he is making his way through the forest, he stops and notices an abandoned cabin in the middle of the woods. He knocks, hoping to get a response from someone. With no responses from his knocks, he opens the cabin door. He walked around the house and rummage through the items in the drawer. As it was dark in the cabin, he managed to find a matchbox and lights up a matchstick. He walks further into the cabin and opens up another door. A zombie chanced upon him but he manages to shoot the zombie down with 3 shots. After the scuffle, a woman crying for help knocked on the door and he hurries to the door to let her in. He opens the door, and is then eaten alive by a horde of zombies.

Influenced by ‘The Walking Dead’

This story is inspired by the walking dead. I personally like the horror genre of the show and how they use sounds to accompany the grotesque imagery in their scenes. The idea of using multiple layers of zombie noises, clothes ruffling, screaming, blood dripping for this scene has allowed me to better develop my story to make it more believable. 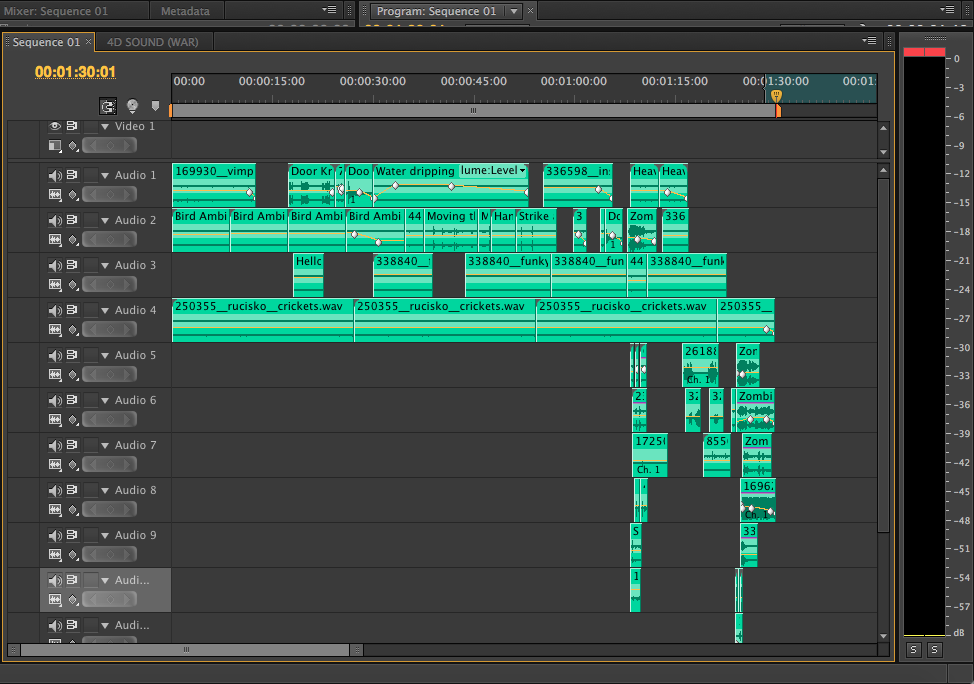 More of the layering of sound effects are done at the last part of the whole composition. I had to try to make it as real as possible to that of zombie films. I also incorporated some distance towards different sounds to give the idea of how close the main character is towards the audience and I had to consider things that were happening in the background. I also made use of panning for some of the walking parts to give the audience the idea of the main character walking from one end to the other end. I added a constant cricket sound which was influenced from the walking dead to portray the still atmosphere in the whole composition.

Overall, I felt that I’ve learnt a lot about the use of sounds and how sound plays an important role in our visual experience. I realise now how a lot of effort is put into sound in movies, even with the simplest scenes. It has been a great learning curve for me and hopefully this knowledge will help me with my final project.