‘Streak’ captures the vibrance of an urban city fueled by lights and how the city truly comes alive at night. Using the medium of photography, I wanted to capture and create the manipulation of time by ‘stretching’ the captured image and combining it with effects to evolve an image into something new and refreshing.

This is a very interesting approach to a moving city in Los Angeles through timelapse.

Another great example of what I hope to achieve for my own video with the use of mirror effects to achieve a kaleidoscope effect. 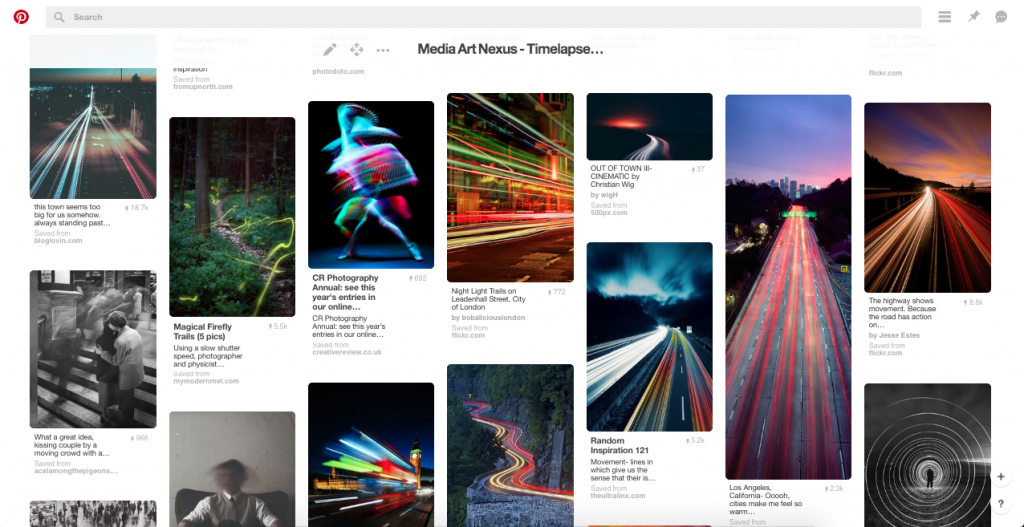 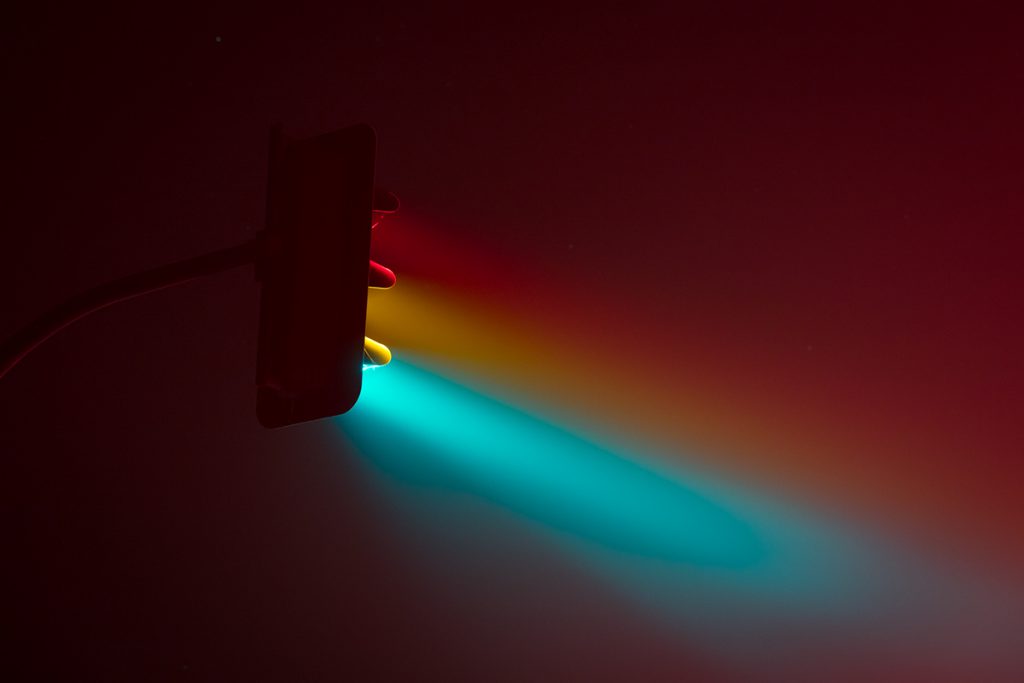 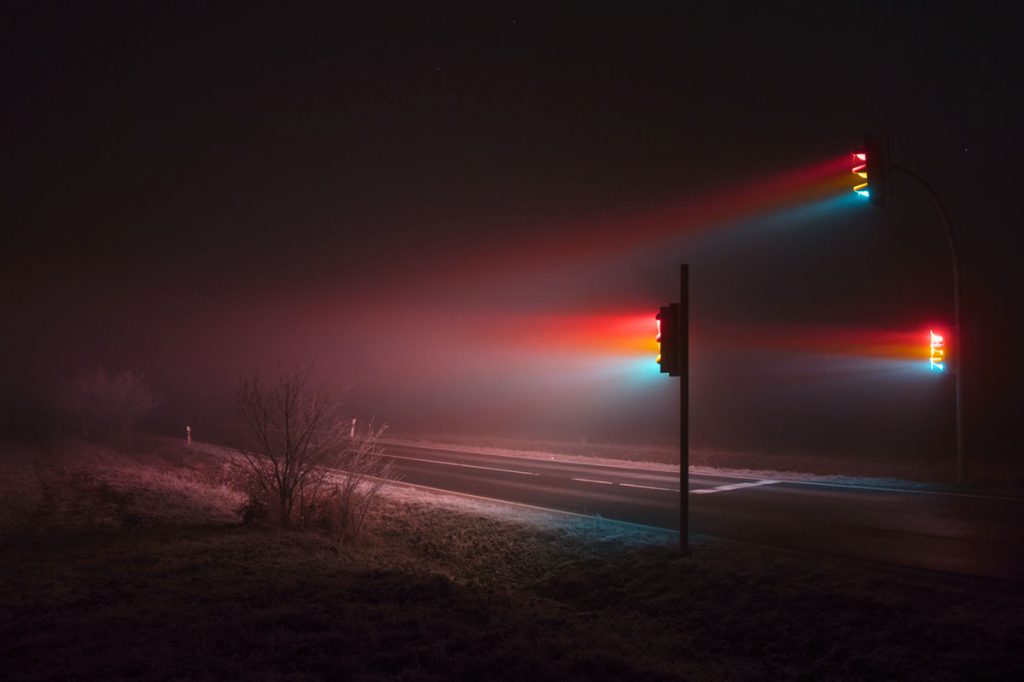 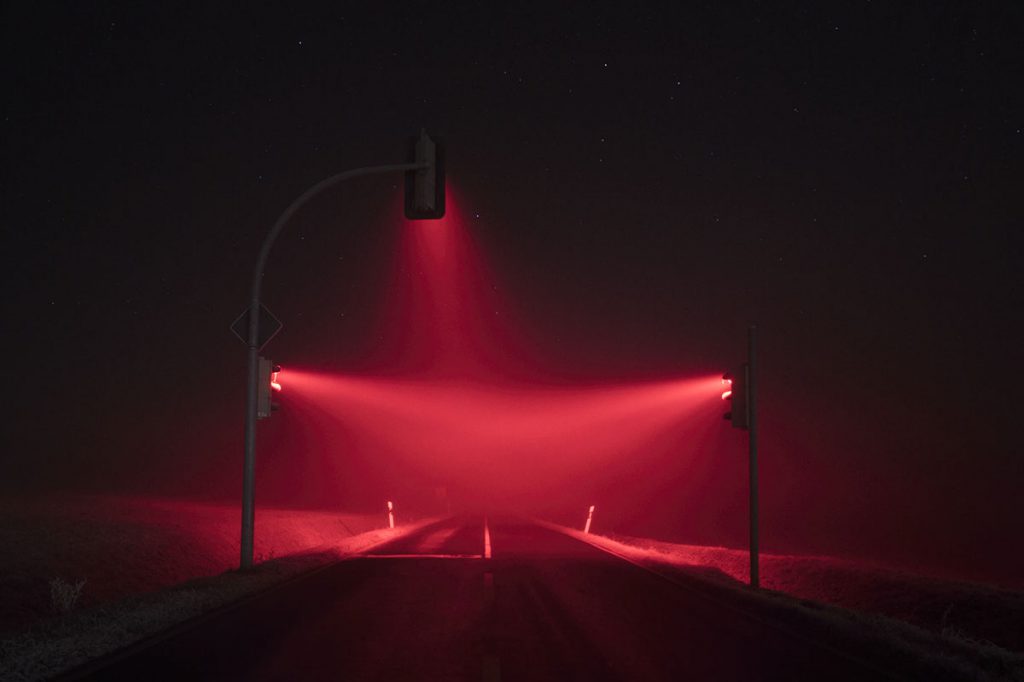 It took me several nights spanning across a few weeks and a lot of patience to capture these timelapses. In order for me to get the streak effect, each shot/angle had to be experimented based on how long I wanted the shutter to be open in order to capture the moving light.

So, for example, I take about 9 seconds for each picture. I set my timer for about 20 minutes, which will roughly give me about 133 photos. If importing into Adobe Premiere Pro with a 24fps sequence, I can achieve about 5 seconds of moving visuals. 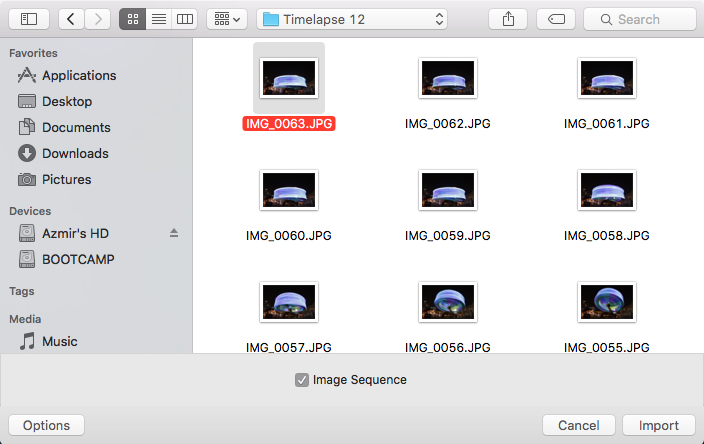 Marking the beats of the song This was the initial test of the visuals, testing out the resolution, quality as well as the speed of the clips. The visuals are raw and have no added effects applied to it.

The effect that was widely used throughout the video is the ‘mirror’ effect which essentially reflects the image to form a more sophisticated shape/form. All of my editing (compiling timelapses, arranging of clips, applying effects) is done in Adobe Premiere Pro CC and tweaking of colours of certain images is done in Adobe Lightroom. 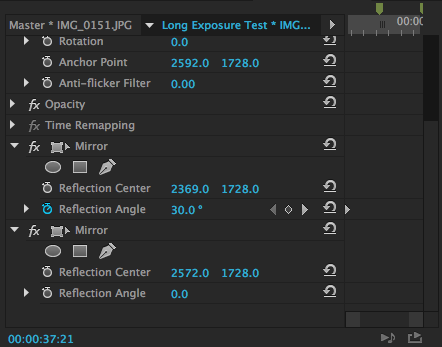 As of now, I hope to get all the clips sorted from start to end by next week and also to tweak and tighten up certain transitions in between different clips to make it more cohesive. There is also room for me to continue experimenting with different effects and possibly overlaying certain elements to bring out the idea of the city being alive. 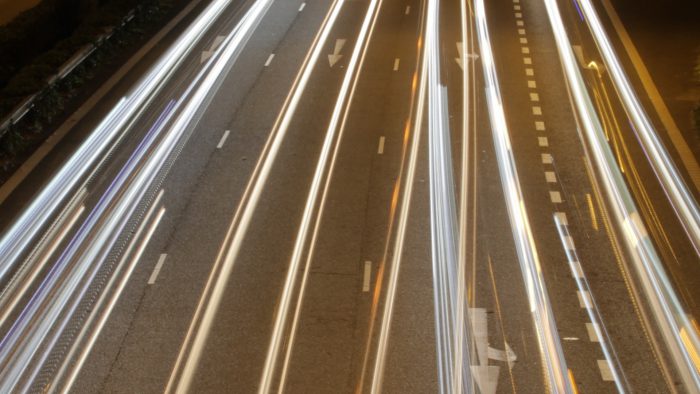 Following my progress from the previous weeks, I was not exactly satisfied with the outcome of the experimental film(nature) that I had created and that it was different than what I had envisioned, following a few minor problems that come along with it. With that being said, I’ve decided to put the nature theme that I initially picked for this project aside for possible future personal projects instead (when I have more time) and go a completely fresh and new direction. Referring to other ideas in the first post (moodboard), I decided to adapt the use of long exposure photography and incorporate this technique into an experimental film.

I’ve always been intrigued with how light is perceived and how amazing our eyes enables us to see the world with the power of light. I wanted to combine the manipulation of light and time to create something that we don’t get to see with our naked eyes. By doing long exposure photography, I am able to allow the shutter to be open for a specific period of time, capturing any form of light that passes through the frame and therefore ‘lengthening’ the streak of light. A normal photo captures the light at the specific point of time, almost like a freeze frame, but long exposure allows me to capture streaks instead.

For this project, I did a series of long exposure timelapses where I turn the set of photos captured into a moving image. Therefore, the light streaks captured will look like its flowing through the image, giving this sense of movement.

I did some test shots and was quite pleased with the results. The beauty of long exposure photography + timelapse is that there is some calculation involved to get the desired time for each angle. I had to play around with the shutter speed first to see roughly how I wanted to achieve the final outcome of the light streak. After a few tests, the best setting for me now is opening the shutter at 6 seconds for each image and then setting an intervalometer that will automatically take a photo every 3 seconds. This means that I take about 9 seconds total to capture one image. I set my timer to about 20 minutes for each framing that I wanted, which estimates around 133 photos. When I import into adobe premiere pro, I set my sequence to 24fps which means that for each set of photos, I’m able to achieve about 5 seconds worth of moving visuals.

The video below is in the 1920 x 1080 resolution. This is the overall frame of my photo before I actually scaled it to make it look more ambiguous. The reason I took a wide shot  instead of a ‘zoom in’ is because it gives me ample room to manually select the specific framing of the 3840 x 480 resolution to be.

The video below is the same video from above but with a resolution of 3840 x 480 pixels. I scaled to make it look more zoomed which allows it to look more ambiguous and more futuristic looking.

Another example of what I have so far.

One of the challenges I’ve faced so far for this is finding varying shots for the light streaks. The best so far that fits the current theme are cars. I’m still seeking for more objects or things that emit light and it has to be moving in order for me to manipulate the light using long exposure.

Another challenge is setting up the shot properly and ensuring the camera is untouched for the duration of the shot. I have to ensure the focus is properly adjusted before I start the timelapse. There was once when the focus was off for the entire duration of a 20 min shot, which resulted in loss of time and I had to reshoot the same scene again.

I’ve also had trouble finding a suitable song to fit the fast paced movement of the shots initially. Most of the songs felt a little slow and didn’t fit the futuristic/urban lights feel to the image. However, after scouring for hours on the internet, I managed to find a fitting song for the experimental film that I’m doing from soundcloud.

For testing on the wall, I had compiled a few scenes that I’ve captured so far just to have a feel for it and see the quality of the overall project. I guess the good thing about taking photos for timelapses is that there is a lower chance of quality loss.

To progress from here, I will be looking out for more places/things to film and also working on my edit, mainly editing to the beat of the music and hopefully combine it into a whole visual piece. 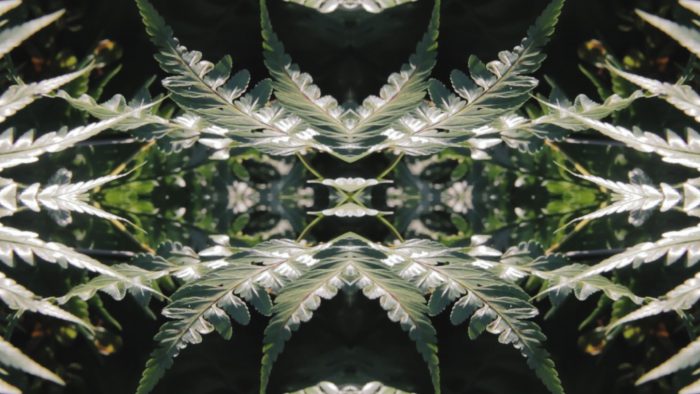 Following up from my previous post, I went around and did some experimental shots at a nature reserve to try and have a feel of what I can come up with relating to the theme/mood I was going for. I played around with the effects in Adobe Premiere Pro (mainly mirroring and glitching) in order to bring out a kaleidoscope effect/generative art from a mundane piece of visual.

For this piece, I basically did some movement with the camera in the actual filming and then I added a single layer of mirror effect. I personally like this piece as the reflected image and the movement allows it to look like it is evolving within itself, creating a new and refreshing image with every frame.

Next, I experimented with more layers within the same clip and overlayed 4 different layers of ‘mirror effect’, each with a different angle to multiply the image to make it look more abstract. This produces an image almost similar to when we look through a kaleidoscope.

These are a few more examples I did experimenting around with the mirror effect to see the outcome of it.

In addition, I referenced from youtube tutorials to learn how to make glitching effects, either to compliment a transition from clip to the next or just to give an extra layer of effect to enhance the clip.

This clip below was a combination of the glitch effect I’ve learnt earlier and also doing a bit of speed ramping (which is basically speeding up certain parts of the clip and slowing it down).

After experimenting with these clips and effects, I realised that I’ve been working on the 1920 x 1080 resolution instead of the intended Media Art Nexus wall resolution which is 3840 x 480.

I converted my files to fit the sequence settings of 3840 x 480. However, I wasn’t very satisfied with the outcome when my 1920 x 1080 footage had to be resized to 3840 x 480 as that would mean that I would have to double the pixel count on the long side which would result in a loss of quality of the footages. This also led to more problems that affected the storytelling I initially envisioned. Due to the ‘crop’ resolution, it looked like there was a narrow field of vision which didn’t portray the visuals I had in mind. A large section of the images were cropped out which resulted in an almost ‘zoom’ perspective of these images. 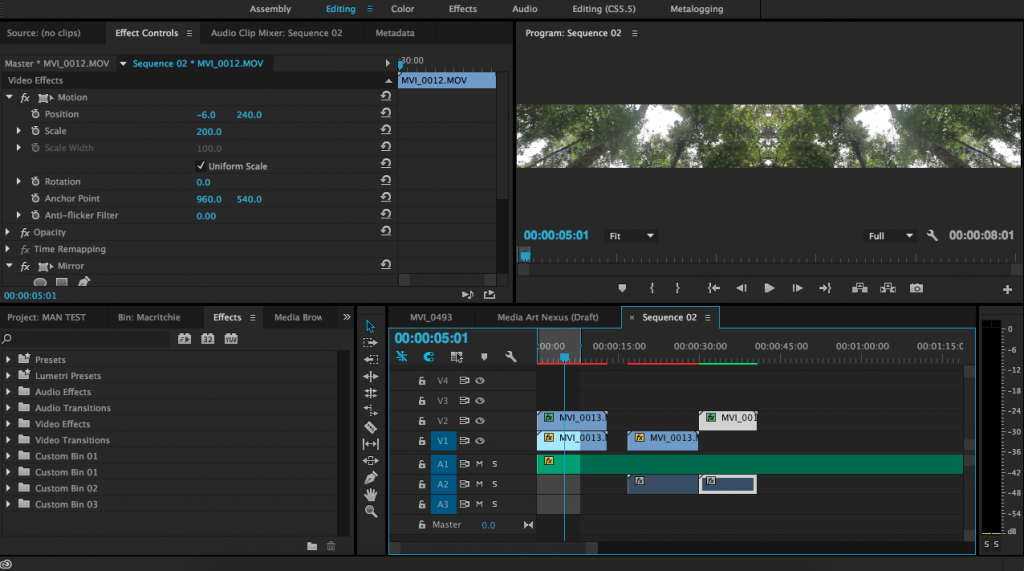 Timeline screenshot of the footage in 3840 x 480 resolution.

Example footage with mirror effect in 3840 x 480 resolution. There is a narrow field of vision as compared to what I initially intended.

Overall, these experiments have helped me to realise what actually works and what didn’t. It also allowed me to improve my technical skill of the software and workflow of the project.