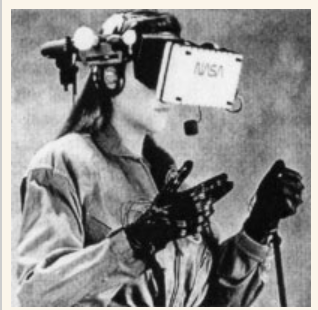 The usage of virtual reality (VR) has been evident in the past and is one of the most prominent advancements in technology in today’s world. In the art scene, VR has played an essential part to bring many artworks into the digital realm, enhancing convenience and the interactive experience.

By implementing different types of gear for different body parts, VR allows people to have a fully immersive experience with the artwork. The most important part being the headset that shows a 360 degree of the virtual environment. There is a huge amount in the flexibility that artists can use in VR as the spaces are infinite and imaginary. One example of VR works that use this space is i-REAL, a hypermedia artwork that mixes the contributions of a trip in virtual reality, a map of JE(U) with i-REAL cards and in the future an artificial intelligence. The board game is the hotspot of the system. It is composed of about thirty i-REAL cards previously developed on the Instagram social network using the maximum of #hashtags available to install links between words / images. The use of three randomly available cards – but renewable – connected to the card JE(U) by an NTFC chip with the help of two dices, triggers the corresponding sequences in VR. To turn the map JE (U) – actually composed of three PART-i that can turn around the same axis – in order to connect the maps and reveal the locations where the keys will open the sequences in VR, the cheek must roll the dice and maybe, in a version 2.0, win the right to tackle artificial intelligence.  (https://culturevr.fr/en/i-real/)

The use of VR stems from the concept of hypermedia, which was a concept that appeared after the war. It talks about the matter of which the World Wide Web is made. Much like the physical world is built of interacting elementary particles (Bosons and Fermions), the web is essentially a universe of myriad interacting hypermedia documents. But since the early 1990s, the general concept of hypermedia has been largely superseded in popular usage by the term “interactive multimedia.” And this term is now used to portray works that involve the interactivity of the human senses towards an artwork.

In terms of space and conducting of the artwork, VR helps to minimise the physical space needed for the work to occur, as the only gear required is the headset and the gear. It also increases the convenience of bringing the artwork around and the work can be experienced in different environments.

All in all, VR contributes positively to society and is a useful asset to many artworks as more artists pursue digital alternatives.