After looking through my sketch and concept this week, I decided to focus more on how to portray the uncomfortable part of the concept. Thus I did more research on how to portray my physical objects (the childhood transitional objects) and how I could play around with them to show the creepiness or slight discomfort of these items. Thus, I came up with 3 types of executions to show this feeling of familiarity yet strangeness.

Similar to the setting of the Mad Hatter’s tea party in Alice in Wonderland, I thought of making a bizarre and otherworldly dining setting using the transitional objects and normal dining objects. I feel that by adding something that once felt familiar to something that we use everyday may create a feeling of curiosity and strangeness, especially when the transitional object does not match the setting of the items we use everyday (in this case a dining setting). I was thinking of adding smaller toys (doll parts, plastic animals, macaroni necklaces, smaller stuffed toys) amongst the food and drinks in the dining setting. In addition, the cutlery, teapots, teacups and trays can be altered with these toy parts to show the increased dissociation with reality.

I would like the participants to gradually notice the displacement of toys within the setting, which allows the discomfort to slowly sink in. 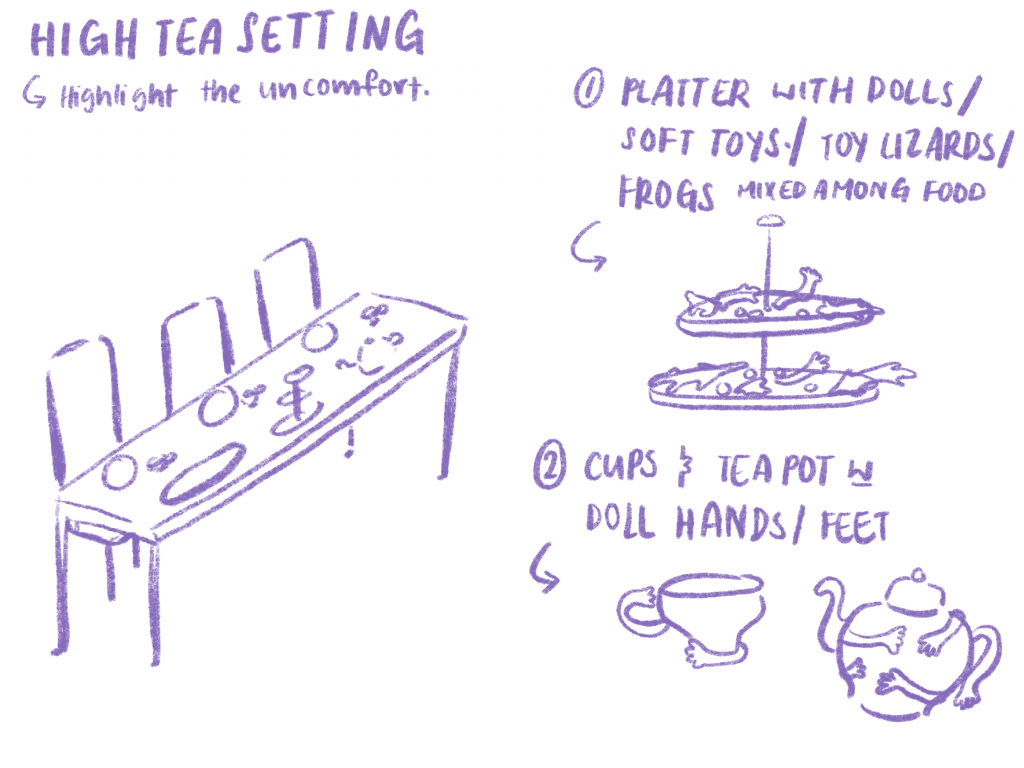 2. Using UV light on the toys/ pictures of toys to show the creepiness/ or how they are treated after discarding them

As transitional objects are often abandoned once the child has transitioned over to his/her teens and adulthood, we often do not think of what happens to these toys once they have been discarded, and I wanted to use UV light as a way of portraying the damage that these toys receive, even to the point of disintegrating them. As we often see these toys in a positive light and in a materialistic sense when we were children, we would see these toys in a different light currently, especially when we have more exposure to horror/creepy content.

I managed to get a pen with a UV light attached, so the ink is only visible under UV light. Below is a video of my attempt at using the pen to draw the strange side of the transitional object.

3. Using blue and red light to show the different sides of the objects

Similar to the UV light idea, the usage of red and blue light allows different images to be shown on the same canvas, depending on what light is shown. I was inspired by street artist Insane51 (instagram), who creates murals using red and blue spray paint. Different murals can be seen depending on which colour glasses the viewer is wearing (red or blue). To be able to execute this method, I would take pictures of the toy in its prime state, and in its destroyed state, edit them and print each on a transparency, one in blue ink and one in red ink, then use an LED strip to show the different perspectives of the object.

I think my concept is leaning more towards the dissociation of reality, but culturing the negative emotions from that dissociation, and translating that emotion by using the strangeness of childhood transitional objects. I do prefer the first execution idea slightly more as it is a direct and quirky way of addressing this weirdness while immersing my participants in the space I have created.

One thought on “Progress – Assignment 1”