In this project, I worked together with Celine where we used Facebook live to interact with one another despite being in two different places.

To me, the third space is about creating a new place which make use of both the virtual and physical spaces. For example in our project, Celine and I sat at two different tables, but only through using Facebook live, it brought our locations together and allowed us to interact within this new space that we created.

The boundaries were collapsed in this third space because we acted as though we were sitting side by side. The main object in this project was a can of Milo which we were able to pass to one another throughout the video despite us being in different locations physically. We also constantly reach out to one another; giving high fives and pats on the head which helped to further enhance this “illusion” that we were in the same space.

I felt that intimacy was achieved in this project due to the visual perception that we’ve created.

“And from this ubiquitous state of shared presence we have come to inhabit an entirely new way of seeing via a fracturing of perception.”

Physically we were in different locations but on the screen, it seemed as if we were together and were able to touch one another visually. That helped to perceive our interactions as being close.

We were able to virtually touch objects by understanding how the split-screen works and  coordinating our movements. For example, when I wanted to reach Celine, I would stretch my hand out towards Celine’s side of the screen till it goes off screen, and from her side, she would use her own hand to connect with my out-stretched arm so that it looked like one whole arm. 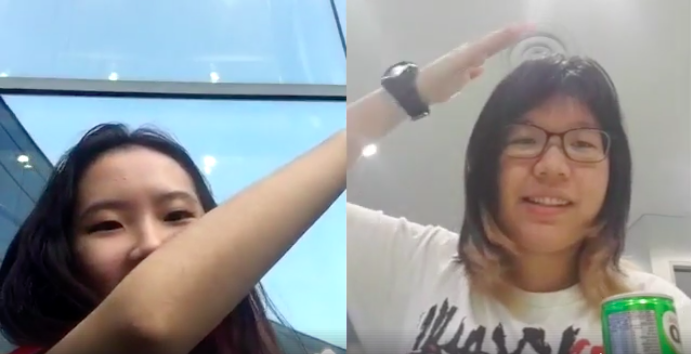 ” The objective of the project
was to demonstrate for the first time how artists based in distant physical locations could meet and perform together, in the same “living image.”  -Maria Chatzichristodoulo, Cyberperformance

In this project, Celine and I collaborated by planning our actions beforehand and choreographing our movements to make it seem like we were sharing the same table. For instance, we knew we wanted to make it seem as if we were drinking from the same Milo can, so we bought two identical Milo drinks prior to the project and during the Facebook Live, we tried to choreograph our actions such that when one Milo can appears on one side of the screen, the screen on the other person’s side shouldn’t show a Milo can, this helped to give off the illusion that we are sharing the same Milo can.