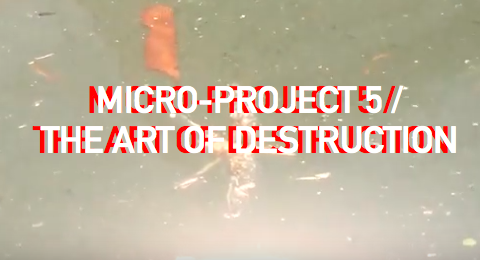 This micro-project was done along with Celine and Joey. For our act of destruction, we questioned what it means to destruct. Apart from physically destroying something, how else can we showcase destruction in a non-literal manner? We brainstormed and asked ourselves-what else can be destructed?  A glitch is said to be a kind of destruction and according to Menkman,R’s “Glitch Art Manifesto” ,he says-

The glitch has no solid form or state through time; it is often perceived as an unexpected and abnormal mode of operandi, a break from (one of) the many flows (of expectations) within a technological system.

Therefore, to destruct can mean to simply break the flow or to do something that is out of what is expected. This brought us to our idea, to film a series of clips and break its sequence, therefore showcasing the destruction of flow.

We went around ADM taking videos of the seemingly normal surroundings. We switched things up by filming in a unusual way. Instead of stable videos, we shook or moved our cameras around so as to create this sense of chaos. We also agreed to go completely random so as to create a even more unexpected result. After we were done filming, we decided to edit our videos separately and combine them together after, without discussing on how we were planning on edit the clips we took. This would create even more differences and distortion, which is what our idea of destruction was. We basically welcomed all forms of inconsistencies and accidents.

When we were done, we finally pieced all our clips together and the end result was truly interesting to see. Although we filmed in the same place, our videos had different styles and varying forms of distortion. My part of the video played with different visuals that was edited to make no sense. Celine’s part of the video played with speeds and reverse. When it got to Joey’s part, there was special effects and added music and the whole video became quite surrealistic. When pieced together, the final video was rather intriguing and enjoyable to watch. This reminds me of Jon Cates’s ‘Hyperallergic’ article where he said-

“Those systems might be broken, they might be glitched, and they might be imperfect and noisy, and that might be what attracts us or me to those systems. But still they are functional or functioning in one way or another systematically. So they are connected to one another as assemblages.”

Similarly in our project, we broke the sequence of a usual film, however I also believe that we’ve brought a rather interesting new perspective to the video we’ve created, making it quite a unique video.