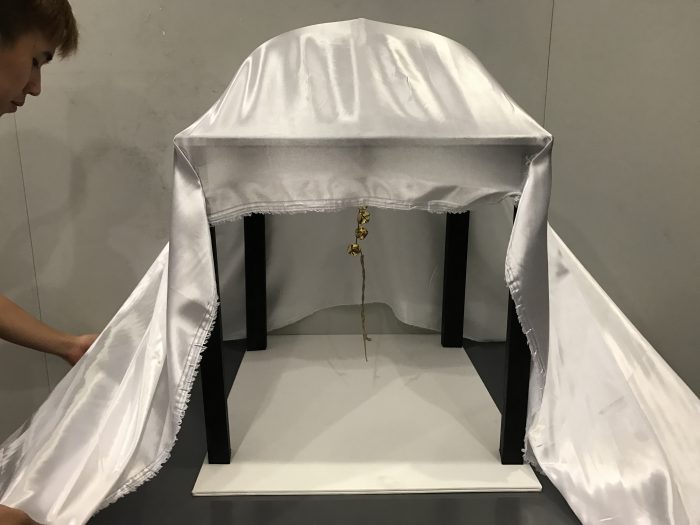 By Amadea, Ryan and Zoe

We’re back with the last project and it’s a group one. Our project titled The Ringing is a performance piece that’s based on the myth about the bell curve and “the bell curve god” as many like to call it. Attached above is the PDF of our proposal.

The bell curve is an essential aspect of the grading systems in most of the educational institutes that we have attended. From Secondary school through to University, the bell curve will mark and affect our grades and thus it is important and a relevant topic to many.

We started with the preparation of the shrine and added on the addition aspects. 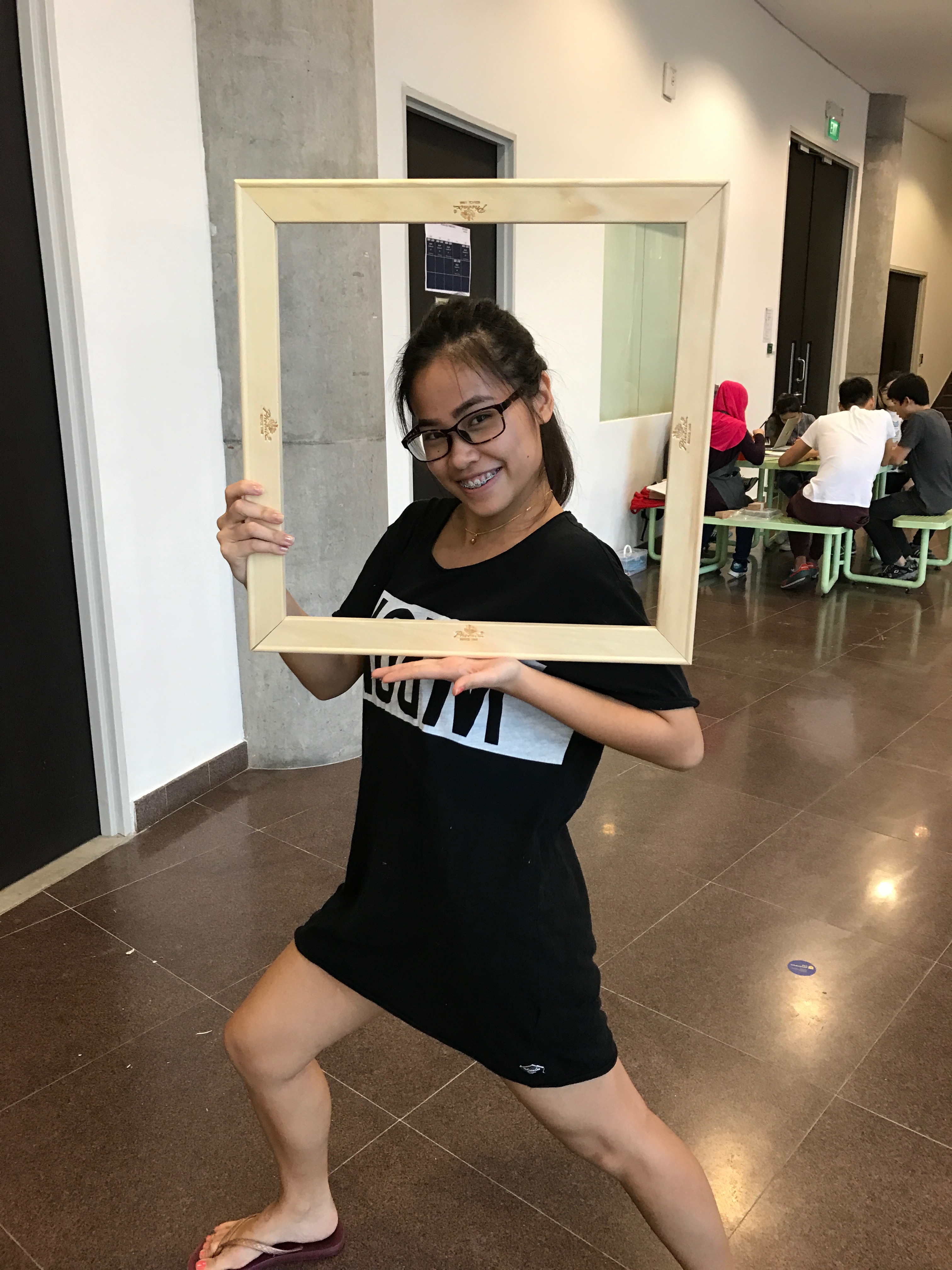 We started with building the structure of the shrine. 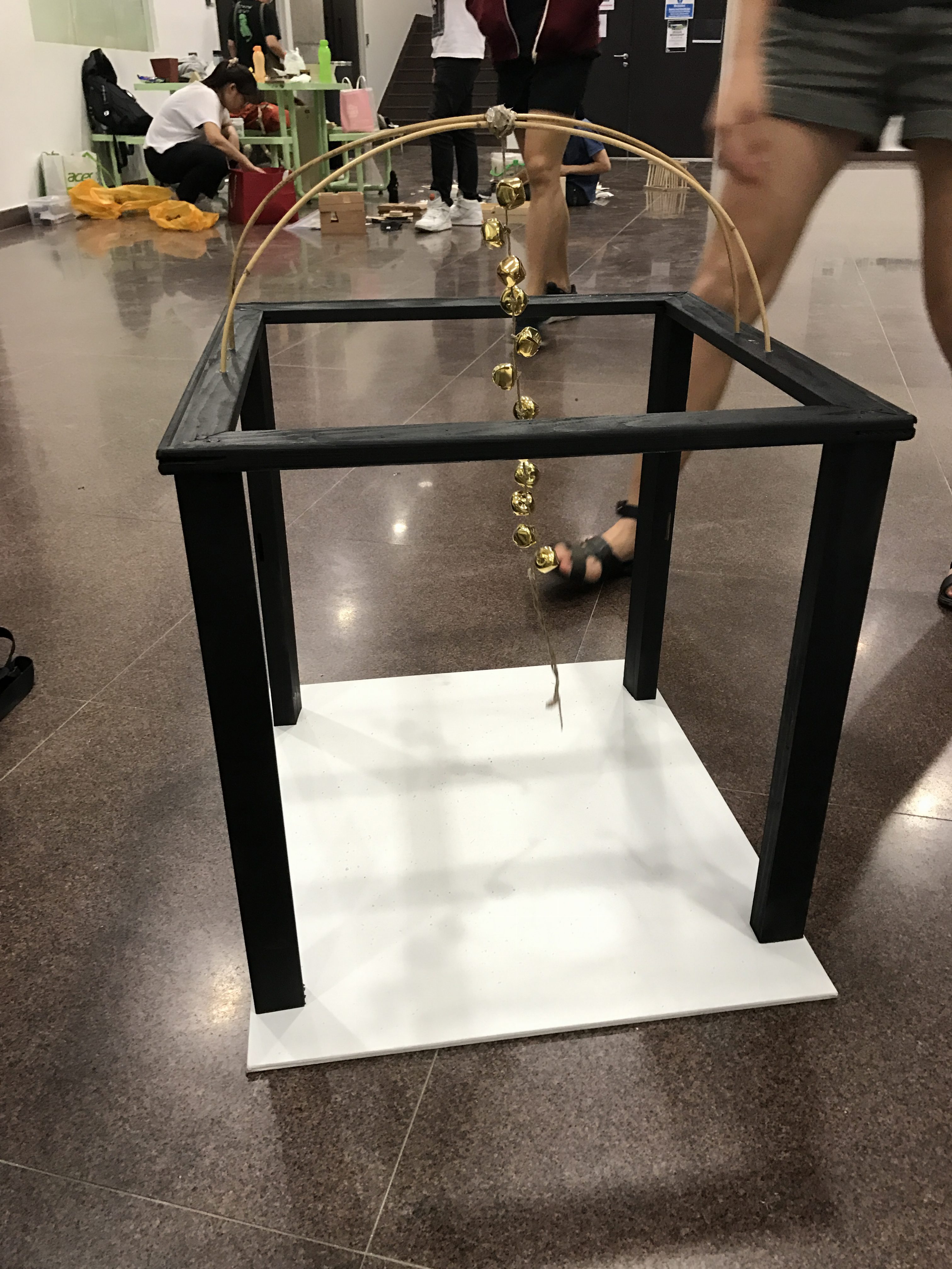 Here, we have already painted and attached the shrine to the base. In order to make the curve, we used cane to create the curve structure. 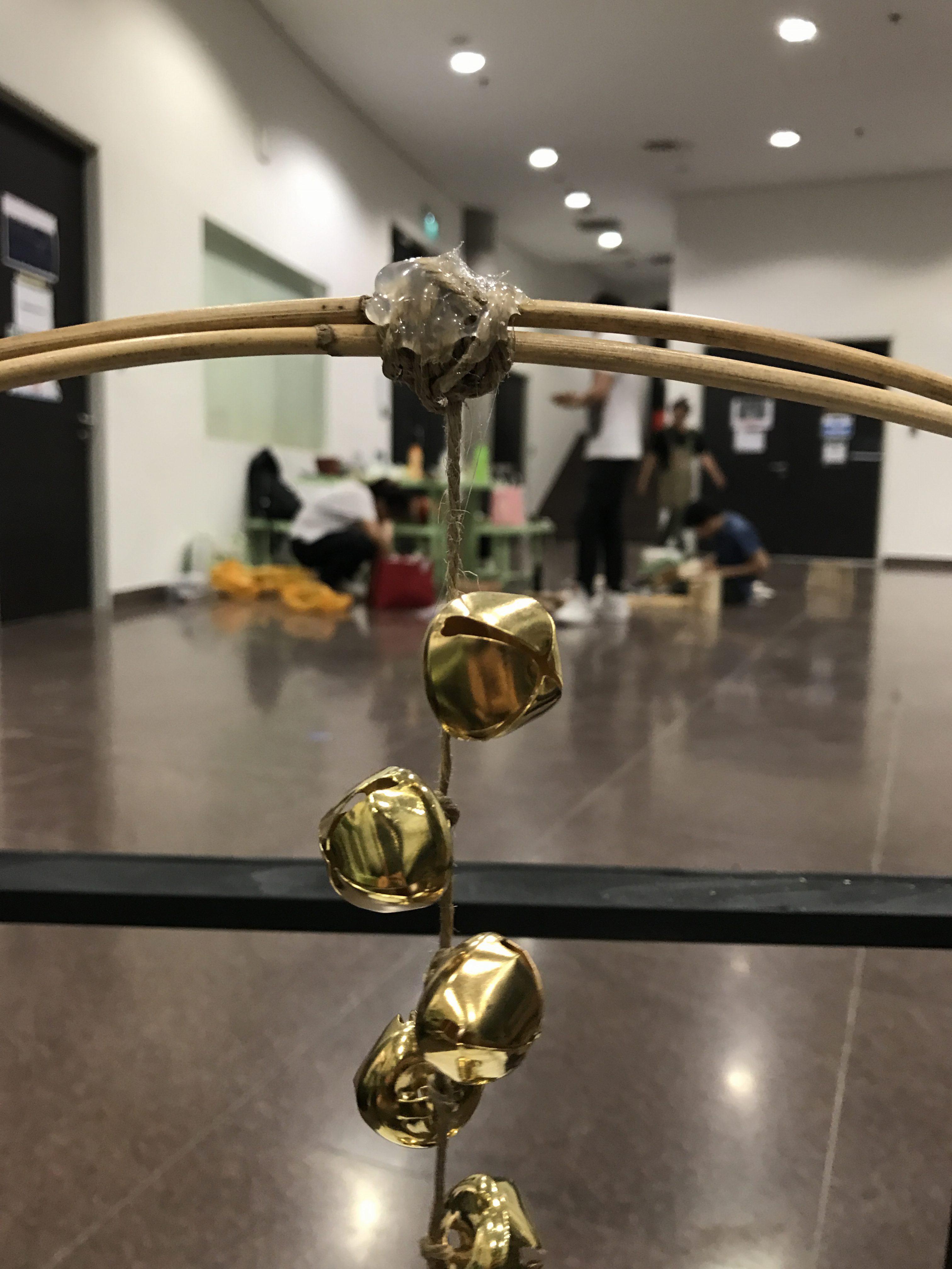 we attached the bells and secured it with string and glue 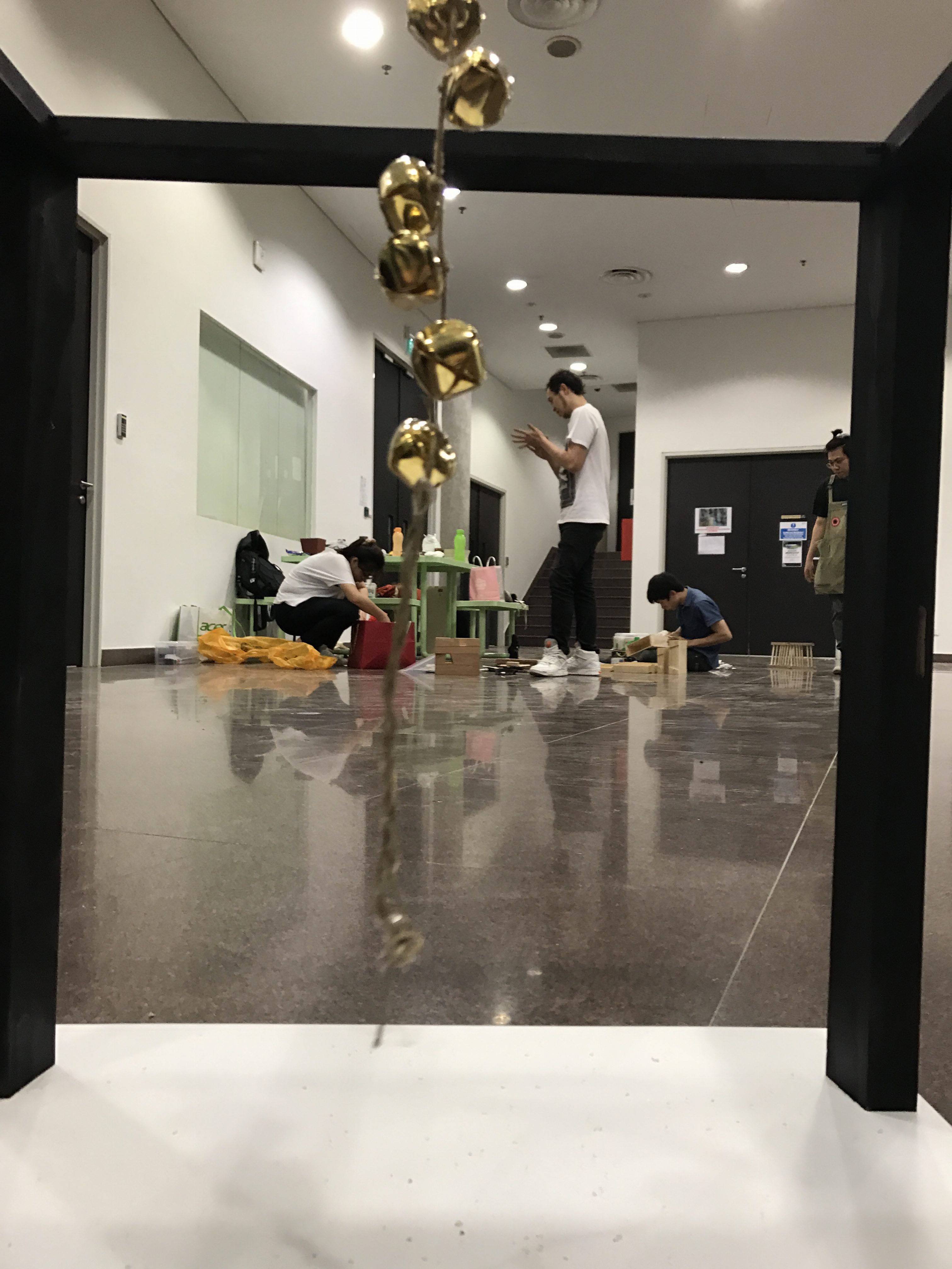 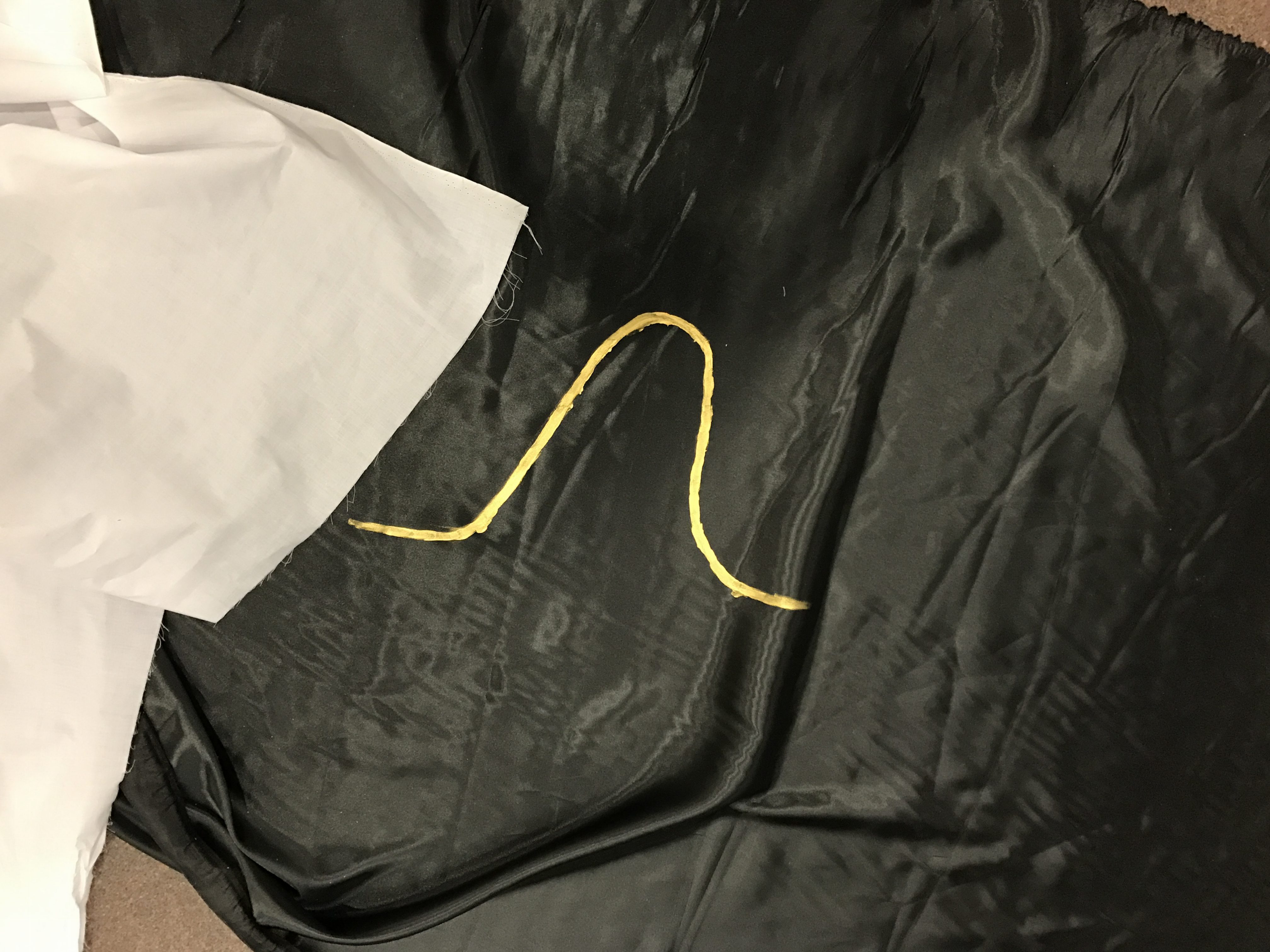 We had robes as part of the ritual and so we painted the indicator of our cult – the bell curve – on our robes. 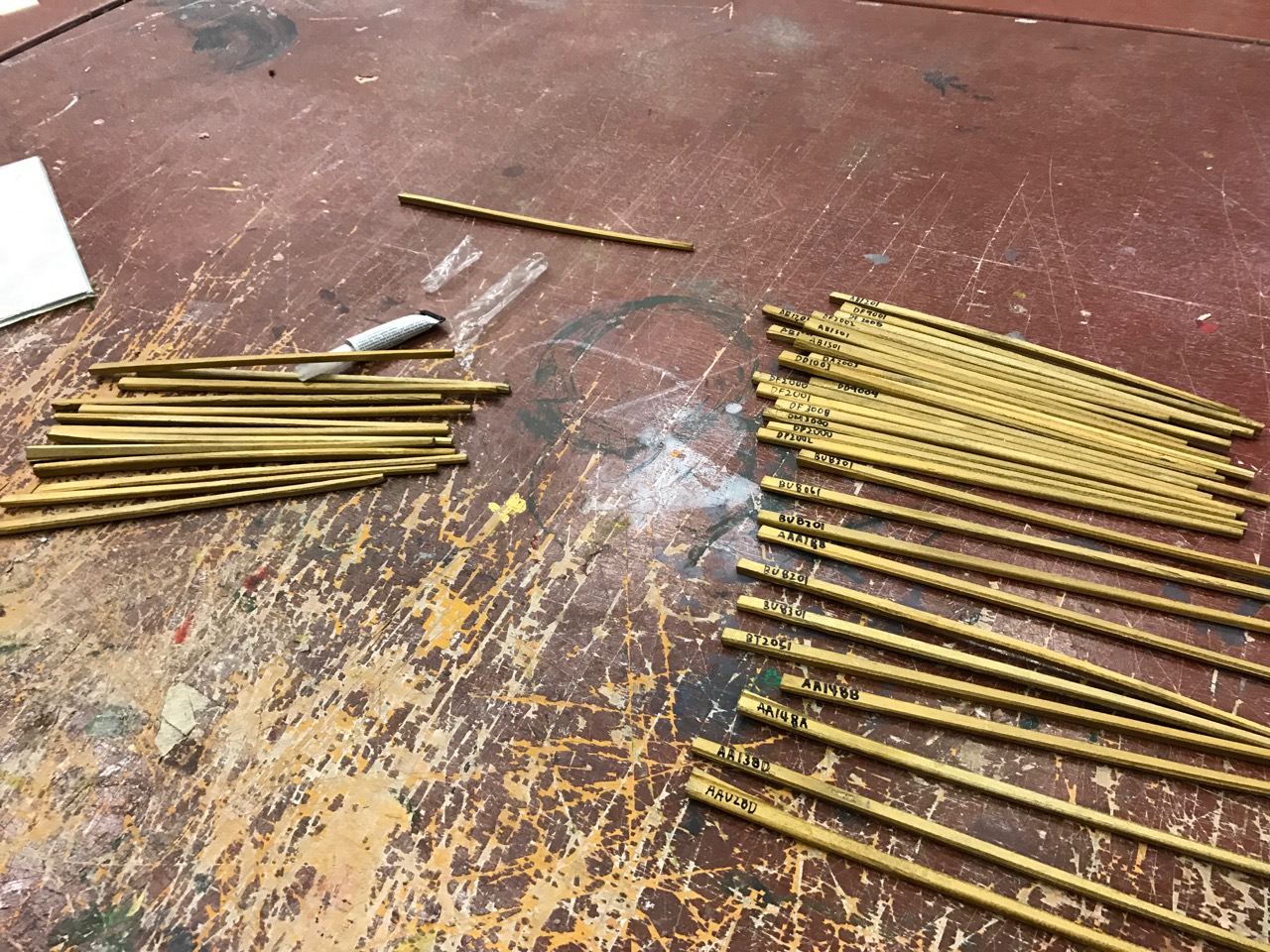 Our sticks for drawing lots for modules to take for future semesters. We spray painted chopsticks gold and wrote the course code numbers on it for the participants to draw during the performance. 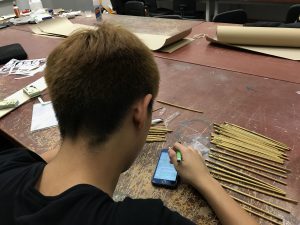 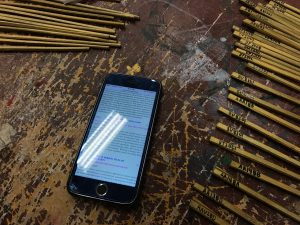 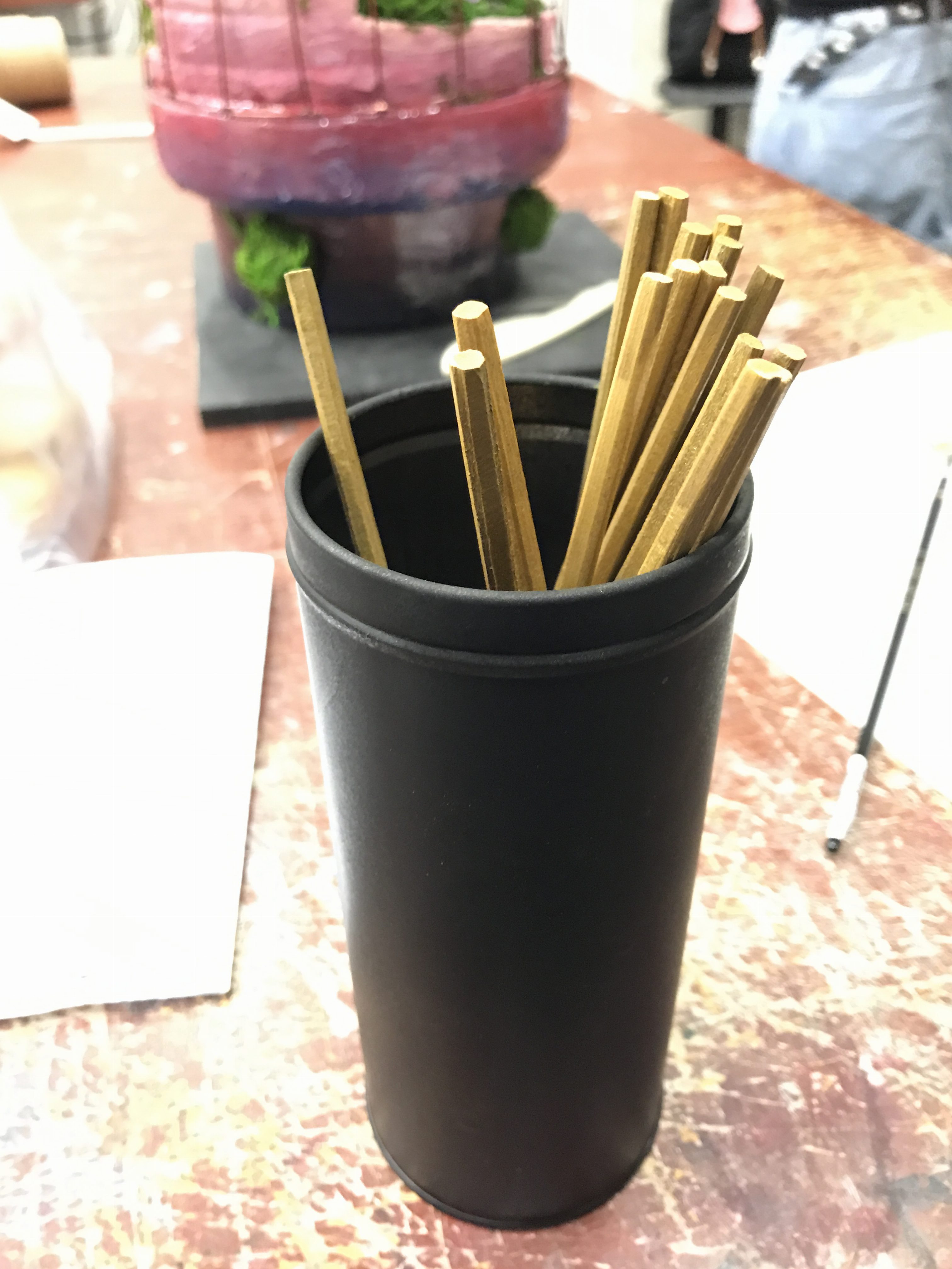 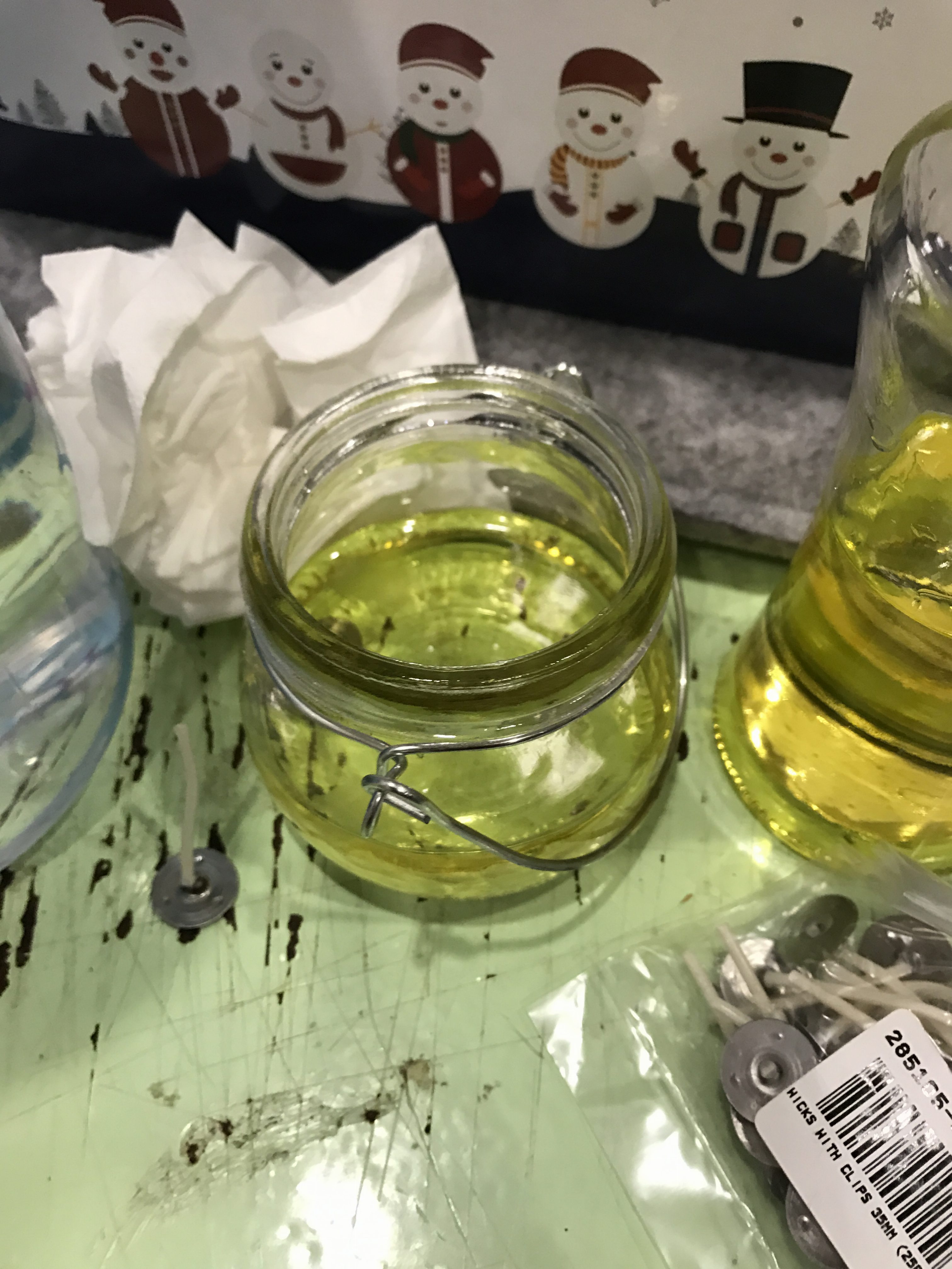 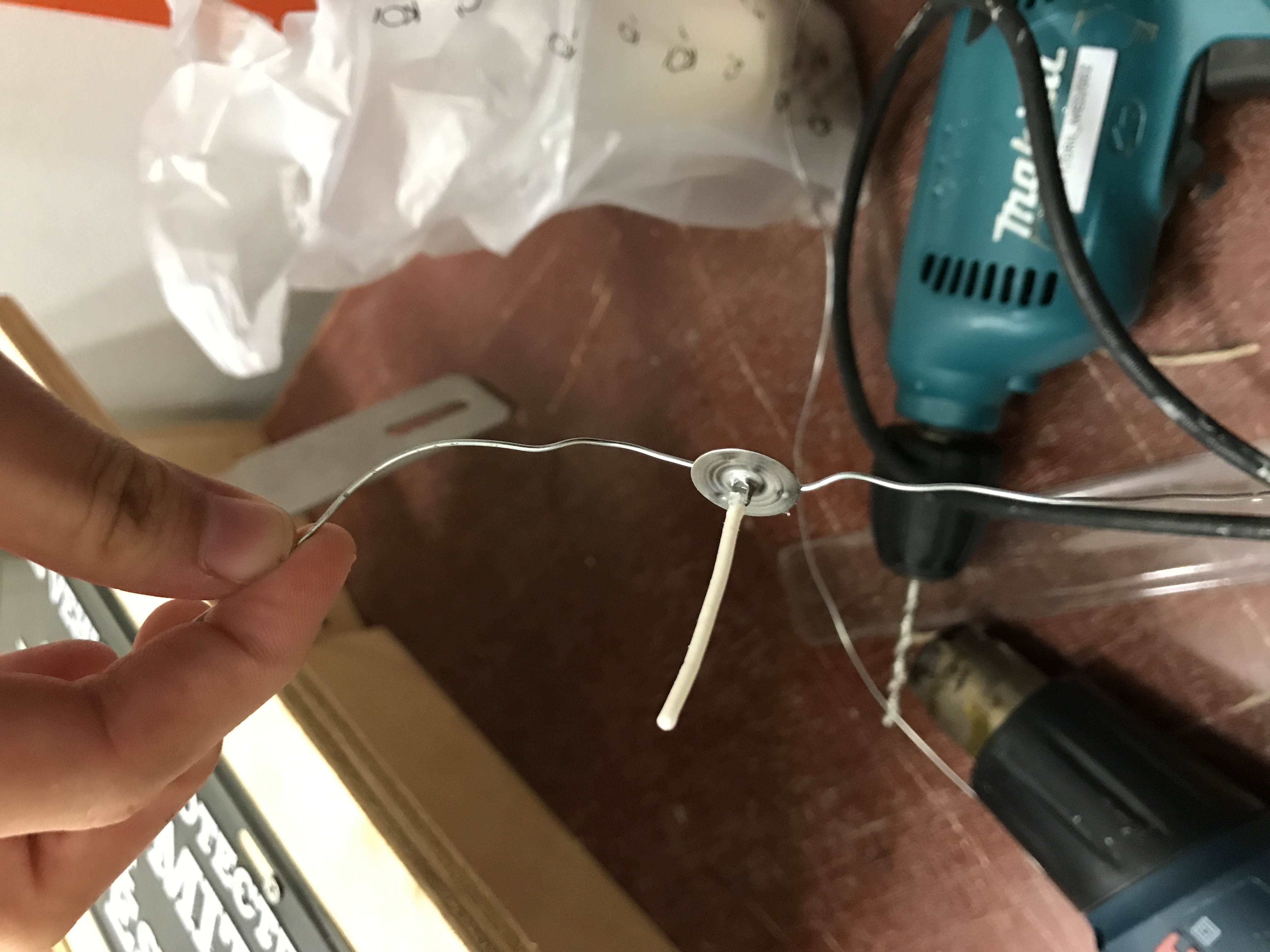 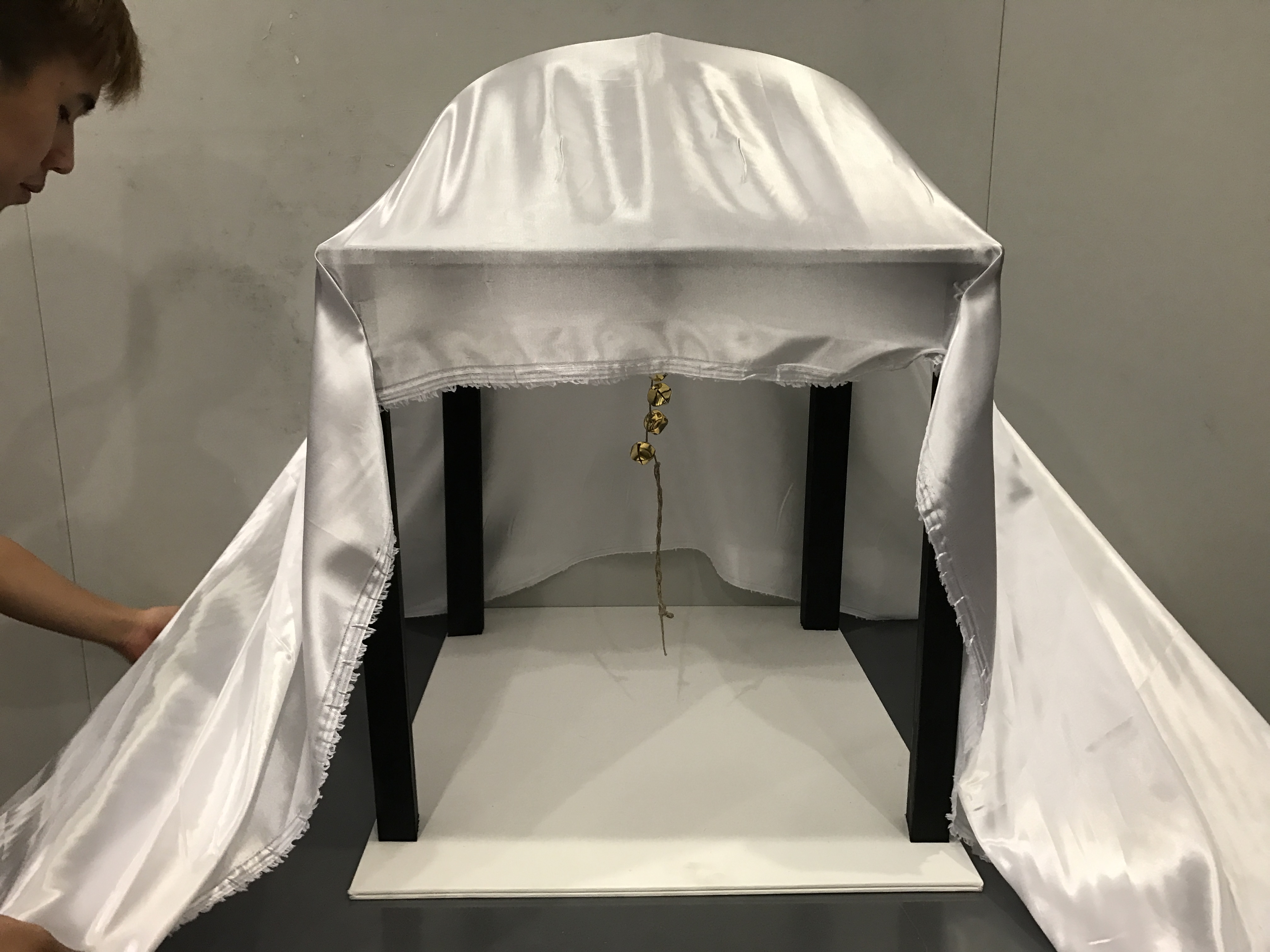 We attached the white cloth over to form the final shrine structure of the bell curve.

In the process of making this installation, there were certain things that we had needed to consider.

-The Materials
As we look for suitable materials for our installation structure, we made a few improvisations to use materials that varied from what we had initially envisioned. Wooden sticks and poles found were mostly too thin. Though we had considered building two diagonal sticks forming a cross at the back of our structure as a stabiliser, we were concern that the sticks may be far too thin to hold the scale of our structure. In addition, having additional sticks may not be as cost-efficient as we would like. After further explorations with other materials, we picked up wooden frames sold in pieces that were very firm in thickness. The measurements of these wooden frames were in consideration of the length and bendability of the canes used as the ‘bell curve’ at the top of our structure. The main bell was improvised in using smaller bells with regards to cost, they were very effective in allowing the audience to create a longer ‘ring’ as the bells were pulled. A thin canvas was used for the base of the structure as other materials did not have a good size to match the length of the wooden frames.

-The Construction
Another concern that we had was the attachment of the bent canes to the wooden structure; whether or not the bent cane will be stable in holding its position upon being pulled, as needed in the process of the performance. Two options that we were considering to use was glueing with wooden glue and drilling. In the attempt in drilling holes into the wooden structure, the bent canes were unstable as the holes made had rooms for the canes to shift. With a smaller drill bit, the canes were able to hold a firm, bent position. The holes were drilled three-quarter into the wood so that the cane will not slip through.

-The ‘Midnight Oil’ Candles
In our first approach in setting up the wicks with olive oil in small jars, wires were first used to secure the wick at a level slightly above the olive oil. Though as we light up the wick, it had were burned off completely in seconds. With cautiousness in a safe area, we then attempt to light the wick partly submerged into the olive oil. The wick lasted longer in this way and there were no troubles.

We took to create a mock session and filmed it for our documentation. In it, you can see the details of the altar and process of a procession. Also, it allowed us to see the difficulties and errors that we might have encountered that was have been reflected above.

We present to you our video here.

During the performance piece, we observed that everyone was laughing and found the project amusing. We acknowledge the absurdity of it and wanted to bring to life something that is seen to be fake and also show the extent to see how willing students are to go to lengths, such as some of our examples, in order to secure and hold on to their grades. We also wanted to perform and end the semester on a lighter note with this performance. Doing something very relevant to students around us helped the performance. Also, seeing everyone participate in this knowing that it was a hoax-ish cult ritual encouraged the performance work and the bring it through to the end.

Often we move along day to day with a being present, that presence helps us acknowledge what we know and see around us. The absence of that being who would give us our bearings makes no difference as our being is attached to the surroundings and we move from place to place and hear common sounds around us. Despite this familiarity, sometimes we still choose to lose ourselves to the surroundings. In this we think of our own elements, feelings and how we are attached to familiarity. This soundscape portrays the absence of the human but the journey of a being. Take a walk with her, hold her hand and be part of this journey.

We attach ourselves to the surroundings, yet at the same time we detach our minds, going into things that have no link to what’s around us. I used common sounds such as construction sites, busses, the familiar sound of keys (home) and others. The journey of my soundscape is cheery and upbeat, very present. However, as we move on, there is a distortion of sound and a change in tone of the audio. This, I feel is the darker element of ourselves as we get detached from our present surroundings. Thus I went from a lighter tone to a darker distorted tone to convey and express the difference with our presence and mentalities.

ha ha, this was an interesting project as sound isn’t my forte and I wasn’t very clear of what soundscape or sonic portrait I should do as there were various themes that I wanted to explore. For example, the coffee shop uncle, the mama shop uncle or different locations. However, I finally decided on doing what was very present and evident to me, and it is something that affects me a lot, and that was the surroundings around me.

My initial sounds we very flat and constant, there was no journey but loud jarring sounds that didn’t really link. Then I tried to seamlessly tie them together so that it seems like that of a journey and how the constant sound of our surroundings are.

I feel the hardest part is how to portray and convey my ideas fully because my understanding of the theme and thoughtful may not come out fully and properly. What I did was try to change how I think and keep in mind the locations, movement and time that I needed to narrow down to.

Hope you enjoyed the audio clip and understood the message I wanted to convey. Thank you.

There are always dualities in everything we do or see. More often than not, a side of this duality is hidden and we do not see it, understand or identify the duality present. My Alter Ego is a character that struggles with mental health issues but is seen as popular role model in the media. She has to keep up her internet persona while struggling with her personal issues. Though it may deter her, she still has to go through it as media is a career for her, as is for many other individuals today. The media hides a lot of things and information, never revealing the truth of an individual. The data gathered by users and viewers are also very inaccurate. The front we all put up may also differ from who we really are because of many influences.

Initially, I narrowed down my alter ego choices to these two characters: Jenn Im (a youtube personality) and Andrea (the main character of The Devil Wears Prada). It became clear that the direction I was steering to was fashion and media. However, I did not want to just portray and do an alter ego about fashion solely. I have another alter ego/character which is a dear friend of mine. We are both very similar and have somewhat experienced the same things. My friend is struggling with mental health issues and I felt that this was a very appropriate topic to choose as 1, it’s close to my heart because a dear friend is struggling and 2, I have similar experiences with mental health stability.

I decided to combine it to create depth for my fashion/media idea. By merging the two, I felt that it brought out issues close to my heart. For some, they turn to the internet to seek refuge/find answers, but personally, I feel that while the internet offers a lot of information, ideas and fun, a lot of it are filtered and censored.

I researched on some poems that deal with the issue of mental health and fashion etc. I had an initial idea to recite a self-written poem about these issues, however, I felt that the voice overs will clash with the monologue happening in my film.

I struggled with trying to get my idea out. For viewers to see the duality between mental health, and a social media personality, there must be clear cues of the duality. I tried to think of different ways in which I can portray the issues of mental health – poetry, pills, doctor’s prescriptions etc. I narrowed it down to using pills where sufferers of mental health have been prescribed to help them stabilise their emotions and get through what they struggle with.

Hope you enjoyed this film and hope it resonated with you. It was a fun but tough process.

Movies –
Kate from How to be single – her psyche behind how to analyses people
Kat – 10 things I hate about you – her attitude and responses to people around her
Ogla – I, Ogla – her closed up internal thoughts are like mine
May Welland – Age of innocence – forced to succumb to circumstances without a choice
+Andrea – The Devil wears Prada – witty, lighthearted and fun with a deep character
Celena Sarthodien – warrior and fighter like, never giving up/giving people up

My Mum
My best friend