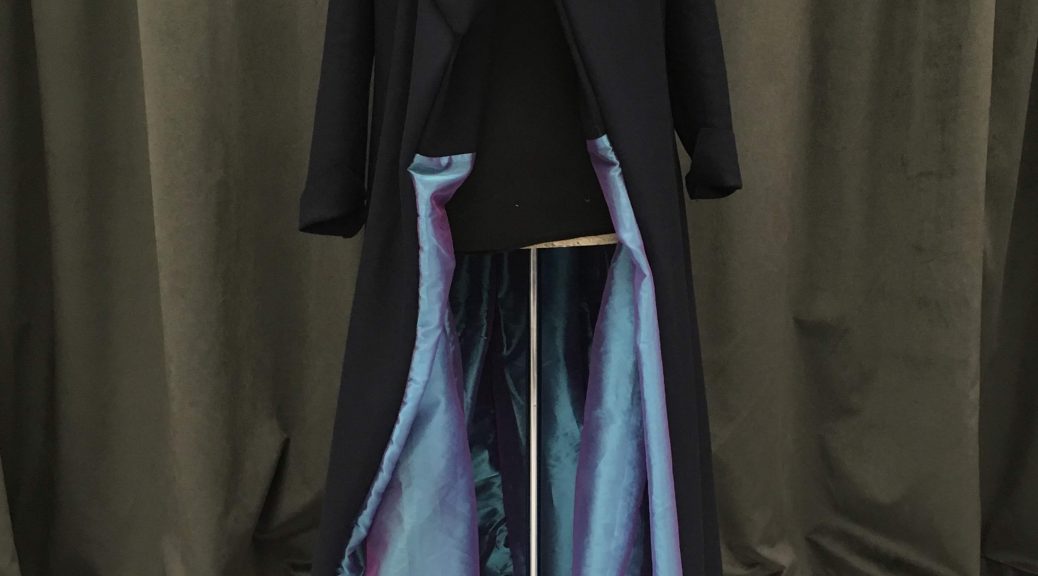 The first process to do was getting the pattern of the coat decided. There was a default oat pattern already available and just minor adjustments had to be made to make for example the sleeves shorter and deciding what type of collar I wanted. Originally I wanted to got more for a plain looking coat that ended off at the ankle but then later decided to make it longer and drag it to have a more dramatic aesthetic.

The fabric chosen for the outer one was wool in a dark shade and I proceeded to cut the pattern out and start sewing them together. Firstly starting with the back then the sides then the sleeves and finally the collar. I learnt that sewing a sleeve like this is a little different as you have to pull the thread first to give it a bit of shape and also something called a lapelle which is a double layer of the fabric in front that is used in coats.

The next step was to cut the same pattern for the inner fabricthat was an iridescent organza  and attach it to the inner coat. I pinned the coat to the back to try and see how it would look like after embedding the servo motors at the side.

Finally with some help with Naga, I was able to have a code and program it successfully to trigger the servo motors attached to the side of the belt that I fashioned out of cotton. I learnt many important terms in coding such as the delay and how it affects the Arduino.

In conclusion, for future use I can make the technology aspect pf the belt more seamless and less bulky with a Lilypad and conductive thread.  Also bigger servo motors and thicker thread so that it would pull the coat better as my coat is heavy.

Overall it was indeed a laborious yet fruitful process in this wearable technology class and is definitely something I am proud of to have it in my portfolio!