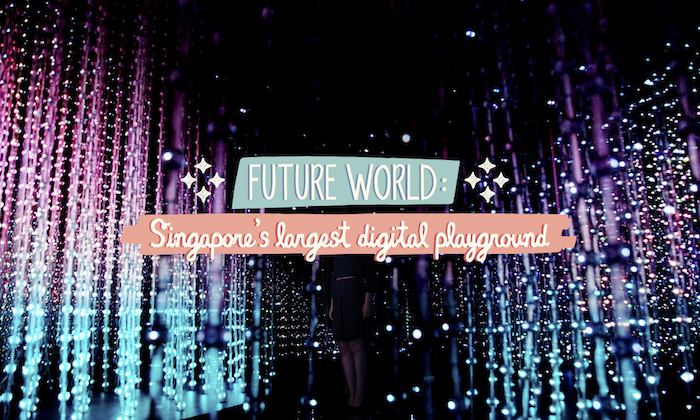 The visit to Future World was my first time there, but it did not disappoint. As part of the exposure and inspiration-finding for the iLights Festival, Future World consists of many installations which users could interact with. Its use of technology, as per the title ‘Future World’, was somewhat unexpected. The ability to use Xbox Kinect with objects and generating a real time display seemed like an unusual use of ‘gaming technology’ for creative interaction.

Also, the colouring papers provided allowed visitors to express themselves and bring their drawings to live via scanning it. The digitalised version would then appear within the animation world displayed on the wall and floor. Also, some drawings were able to be printed out as paper to be structured into 3D form.

Following which was the play area, where large lighted balls allowed visitors to play with them, generating sound and light. There was also user designed hopscotch and an interactive wall where visitors can swipe a chinese zodiac or word token and it would disappear and become the actual form on the wall.

The centrepiece was the Crystal Universe, which is the third generation of massive LED projects. Users could immerse and walk through arrays of LED lights from covering the top to bottom of the room. Unknown to them, it is actually part of a universe where at the end users can pick which universe to have a light display.

One done, we have a Q&A session with the ArtScience Museum director, who explained the various thought processes behind the installations. Firstly, the idea of bringing play to adults is an interesting concept, especially in a overly serious society like ours. We yearn to unleash the inner child within us. In a user experience angle, this concept is especially important, since it is a very good and effective way for users to be interest and willing to interact with the installation.

Also, a takeaway from the use of lights in all the installations was the creativity in using light in so many different ways. TeamLabs however is a large company with strong technology teams, thus is able to provide a more complex installation. As for the iLights proposals, our students could draw some inspiration and will definately have a stronger idea in mind.