Looking at a classic experiment done by Edward Diener at the University of Illinois Urbana-Champaign and his colleagues way back in the 1970s with regards to anonymity and anti-social behaviour.

The researchers were interested in what situational factors lead children to engage in antisocial behavior, specifically stealing and breaking rules. They set up several houses’ entryways with two bowls –one with fun-sized candies and another with money. When children came up to the door, the experimenter would greet them and tell them to take ONE candy from the bowl. They would then say they had to attend to something out of sight in another room, but would actually go behind a fake wall and spy on the children through a peep-hole to see how much candy and/or money they took.

They manipulated or changed one of the factors of interest to the researchers. For the anonymity manipulation, some kids were asked their names and address while others were not. For the altered responsibility manipulation, the researcher would sometimes single out one kid –the youngest– and state that THAT tyke would be responsible if anyone took too much candy or stole any of the money. The results shown in the table below. 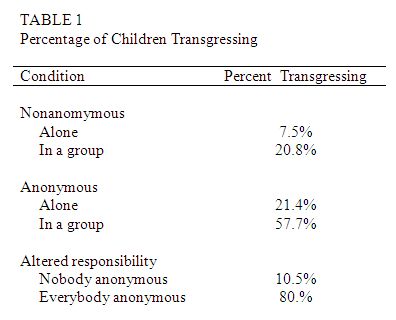 The kids who stole the least were those who came to the door alone and who were robbed of their anonymity by being asked their name and address.

The absolute worst offenders were those groups of kids that were anonymous AND for which the experimenter had singled out one kid and said “I will hold you responsible if any extra candies are missing.” In those groups, the transgression rate was 80% !

The researchers hypothesized that the reason for these increases in antisocial behavior had to do with “deindividuation,” which is when a person is made to lose a sense of individual identity. Remaining anonymous does this, as does being in a group and having a scape-goat on whom to pin responsibility for your behavior.

Insight:
This is an interesting experiment to show how anonymity can affect people’s behaviour and the likelihood of transgression. As people become anonymous and with someone being targeted to take responsibility, the transgression rate is drastically higher than before. However with that being said, I am curious as to how can we use this study to understand manipulation to help engage people in coming together and interacting with people with disabilities without negative behaviour, which is how temptation and the incentive(sweets) can actually motivate/encourage people to perform certain tasks.