Brief overview
After a threat from the tiger forces him to flee the jungle, Mowgli, a young boy, embarks on a journey of self discovery with the help of a panther, Bagheera, and a free spirited bear, Baloo.

After being spied on, Mowgli is kidnapped by monkeys who present him to their leader, a giant ape named King Louie. 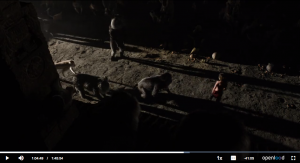 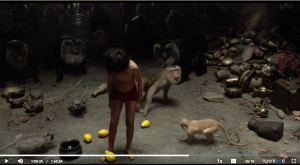 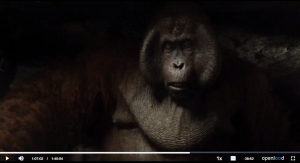 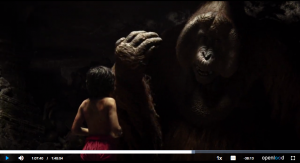 Above: Mowgli in King Louie’s chamber surrounded by his minions, intimidating Mowgli

The ears King Louie is referring to aren’t actual ears, but rather, his minion monkeys who spied on Mowgli and kidnapped him.

I knew I wanted to have a central ape figure, as I felt that that would make it most applicable to the movie. 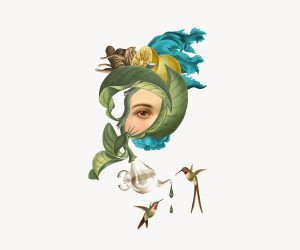 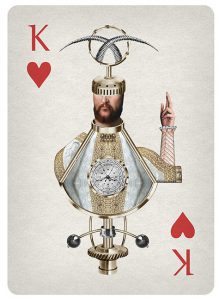 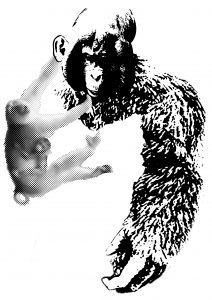 Initially, I tried having a smaller minion monkey hang from the ear of a giant ape, but it I felt that it did not express the plurality of ears in the quote. This was a pivotal composition, though, as it made me realize how important repetition was for this quote. 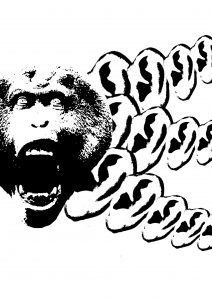 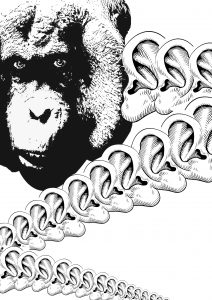 I went on to try and vary the facial expressions of the central ape (King Louie), but the left composition seemed too aggressive. I liked the right ape’s facial expression more because it’s quietly threatening, much like how King Louie was in the actual scene.

While I liked these composition-wise, only by working with only ears did I realize the absence of the smaller monkeys. I felt that the smaller monkeys really embodied the spirit of the quote, because King Louie was essentially the king of all these small ears.

Moreover,  I felt like working with just ears would be a very literal interpretation of the quote. Hence, I reverted back to using monkeys – not just one type, but the two types of monkey minions (the bigger Bandar-log monkeys and the smaller long tailed macaques) we see in the movie.

As I did not emphasize so much on the ears in the following compositions, and added a crown to alert the audience to the fact that the central ape was King Louie (literally, the king). I experimented with different types of crowns, and cropping in terms of composition. 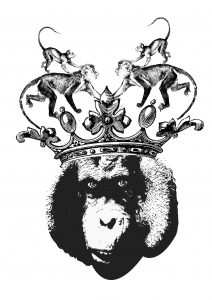 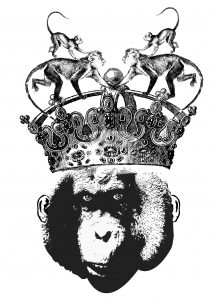 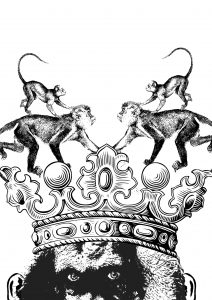 During consultation with Ms Mimi, she pointed out that these compositions did not actually reflect the quote, and there needs to be more emphasis on actual ears in order to relate it back to the quote. Furthermore, I realized another reason why we don’t need the crown is because the size makes it obvious that he’s dominant.

Therefore, I came up with the final drafts that did away with the unnecessary crown, as well as reflected the quote better. I incorporated both normal ears and the implied ears (minion monkeys) in the composition, as I felt that the minion monkeys were important to give a deeper layer of meaning to the composition – they are the real ears, after all. The normal ears add a touch of humor. 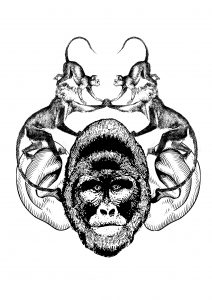 Mimi commented that the ears should have ears, and then I could still have the monkeys coming out of it. That way, the ears would still have ears, while I could also express the minion idea. I really liked the central composition because its reminiscent of religious imagery, and the quote itself sounds sort of godly, with the whole “My ears got ears”, bit. 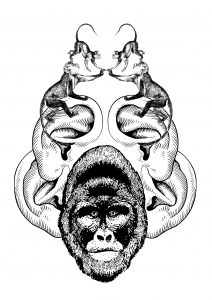