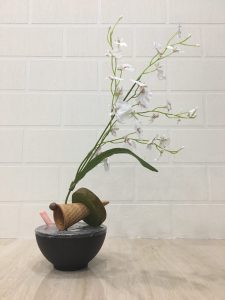 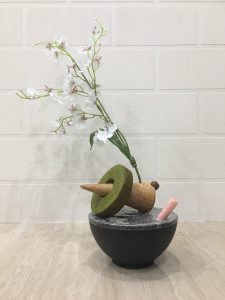 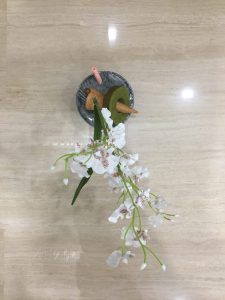 Next, we have spring sculpture 2, made of Indian food! I meant to have the saucepan as the base to be indicative of the tools that was used to make the dominant. Furthermore, the handle was vital to having the dominant cone be able to balance at the 30 degree angle.

At first, I was scared about the project brief mentioning that none of the axises could be parallel or perpendicular to the horizontal ground. However, I learned a lot about counterbalance from this challenge and how to get shapes that weren’t as easy to balance as rectilinear forms to stay in the place where I wanted them to be (っ˘ω˘ς )

I really enjoyed learning about the art of Ikebana and using those principles in my own sculptures. I felt like I explored a lot of new territory with having the branches at specific angles, and enjoyed the visual effect it created as well.

I also learned to truly look at the whole sculpture, from the learning experience with the Indian food sculpture’s base handle being significant in the overall composition as well. Regardless of whether I had meant for the pan’s handle to be part of the 5 D, SD and SO elements, I realized that intention doesn’t really hold up to visual qualities, and learned to tweak the composition such that it could then be included upon this realization.

Lastly, I really felt like a cook after making all the Indian food, and it was even more fun to play with it to make my sculpture. I hope the smell of it didn’t make anyone too hungry in the morning (*≧ω≦*)