Felicia and I thought of a couple other ideas before settling on our final idea: we thought about playing hide and seek on camera (with penalties), dancing to Bruno Mars songs, or interviewing people in religious places in an attempt to understand different religions better – in the end, we settled on a Tinder-in-real-life concept.

Felicia and I would find guys for each other within the span of 15 minutes, conduct a short street-style interview, and pose a final question: “Would you swipe right on my friend on Tinder?” If yes (and they did turn out to be all yes-es, Felicia is gorgeous), the guy and the person we pick them for would form a heart shape in the middle of the split-screen.

We were inspired by this video, but modified it such that we would interact with the guy that the other chooses for us in the third space. We started with a brief overview of our “types” – we would try and find a guy that could possibly fit those qualities. Felicia liked tall, funny and friendly guys, so I tried looking for guys that (were tall) and looked friendly. 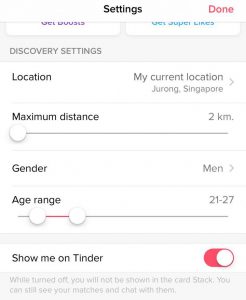 Funnily enough, it was evocative of Tinder’s Discovery settings, where you can set your maximum distance to swipe on. I guess our real-life distance radius was about 1 km.

Why the Charles Dickens-ish title, then?

Felicia and I filmed in two “Cities” – I was inside City Square mall, while Felicia was at City Hall, alongside the Singapore River. The contrast between the two settings was interesting – the inside of the mall had louder background noise, whilst the open air area alongside the river made for a scenic background.

It was daunting task going up to strangers, but we thought it added an element of uncertainty that would create anticipation for the viewer, as well. Finally, a big thank you to Felicia for being so great throughout the whole process!

P.S. So sorry about the late post, I realized that this was saved as a draft.