“Please Change Beliefs” is Jenny Holzer’s first project on the World Wide Web. She is famous for her Truisms – they’ve been displayed on storefronts, billboards, and other public places, such as Times Square in New York. A great number of people have derived pleasure and provocation from them. With “Please Change Beliefs” (1997), that number grows all the more larger with the World Wide Web’s unique ability as a platform to connect people from all over the world. Indeed, within just three years of the launch of the project, over 10,000 new Truisms had been added to the work.

During our first lesson, we added our own version of Truisms to the website by clicking on the word “Change”. My task now lay in exploring the other sections of the website. Upon entering the site, we are greeted with a truism, and a phrase: “Please Change Beliefs”. 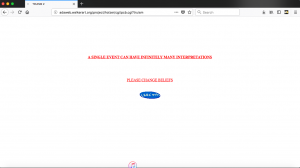 Clicking on the truism brings us through five series of work, presented one after another, as we keep clicking on the phrase/essay at hand. We are able to identify what series the work is from from the name of the tab: truisms, living, survival, inflammatory essays, and laments. Each series also has its own unique features, from the position and color of the text to the background color. Inflammatory essays, for example, have a colored background, whilst laments are centered. 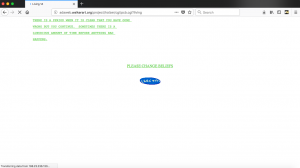 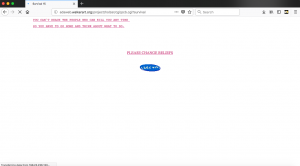 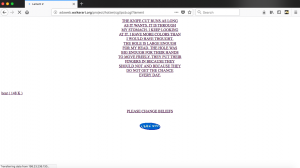 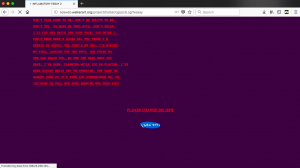 Clicking on the word “Please” brings us back to the homepage.

Clicking on the word “Beliefs” enables you to choose Truisms you agree with, which in turn are updated on a real time poll. Curiously, this is reminiscent of Twitter’s poll function, or even Instagram’s two-optioned poll function as well. Recently, users have used these functions to great popularity, with even choose-your-own-storyline type narratives being invented. This narrative invited a whopping 366,000 votes. The virality of it spurred countless fan art, reaction videos and even translations.

Clicking on the word “Change” enables us to add our own “Truisms” to a separate database, as mentioned previously. 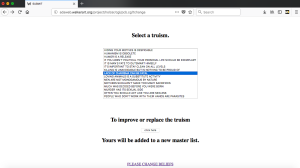 The page turns to a list of truisms within a small, scrollable box. You, as a participant, are encouraged to modify the truism selected.

You can choose to change parts, or even all of the truism. By documenting each and every truism within an archive, Jenny Holzer has turned her site into a collaborative artwork.

“The collective narrative … leads to a synthesis of voices: forming a common thread among peers.”

Randall Packer writes that “the collective narrative … leads to a synthesis of voices: forming a common thread among peers”. Indeed, this was most striking when we view all the ways a Truism can be modified to bring out the participant’s own voice.

“While this may not be thought of as traditional narrative, … asynchronous dialogue constitutes a form of narrative that is … often playful, and multithreaded.”

I share this sentiment with Randall Packer. Even though there is an aspect of anonymity, this makes the work all the more engaging as you, as a participant, imagine who could have written what. Many of the Truisms are provocative (A BITCH NEEDS TO LEARN HER PLACE, for example). Some don’t even make sense (A A A AAAA). This huge variety in modifications is what makes this work so human, even in a virtual space. Having no rules, no bounds as to how the Truisms can be modified makes this work incredibly authentic by imparting a great deal of freedom to the participant.

“The possibilities of peer-to-peer authoring … such as Google Docs, Microsoft Word, and WordPress … dramatically alters the act of writing and narrative … (as it becomes a) collective activity that is highly collaborative.”

Randall Packer also writes that “The possibilities of peer-to-peer authoring … such as Google Docs, Microsoft Word, and WordPress … dramatically alters the act of writing and narrative … (as it becomes a) collective activity that is highly collaborative.” Comparing these softwares with “Please Change Beliefs”, similarities are that all are collaborative in nature, and use the World Wide Web. Google Docs, being more collaborative with the ability to edit, actually made me question the inability of us as participants to interact more directly with others’ truisms in this work.

It would be the only criticism I have for “Please Change Beliefs” – I personally feel that it would complement returning participants’ experiences to somehow have their modified truisms be incorporated into the initial cycles with the five series instead of being a separate archive. This could heighten the collaborative experience, but then again, Jenny Holzer was probably limited by the funding it would take to incorporate this into the code.

Randall Packer ends off with the insight that with the emergence of social media, the idea of collective narrative has become common.  Platforms as Twitter, an entirely public telematic writing space (like Please Change Beliefs), has encouraged collective forms of narrative on a mass scale.

Curiously, in relation to Jenny Holzer herself’s twitter page, it’s a fascinating parallel, with the thousands of users retweeting her Truisms being akin to the “Beliefs” section of “Please Change Beliefs”, both of which involve ‘participants’ voicing their agreement with her Truisms. Retweeting and Liking a tweet then become the newer versions of the “Beliefs” section. 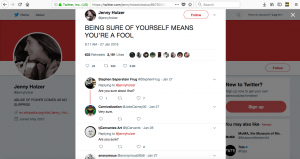 The ability to reply, and question, on her twitter page, echoes the “Change” section of “Please Change Beliefs” – indeed, this narrative is playful and multithreaded as well.

Jenny Holzer’s art has always been public in nature, with the examples mentioned at the start of this essay. And what is more public than the Internet? With the infinite possibilities the Internet presents, her ruthless critiquing is made all the more ruthless with the thousands of voices that have joined her. I thought that I would end off this post with the more hilarious twitter pages inspired by her.