The main gist of the project is as follows:

As an interviewer, we agreed on interviewing at least two people from two different districts. I ended up interviewing 6 people – three from Sim Lim Square, and three from Bugis street. The locations were deliberately chosen for their different demographics. Somehow, they all ended up being in the central location, making it a battle of the locations in Central Singapore. To extend on this project, we could have gone to locations in the east, west, north and south of Singapore – that could have been a fun battle as well. Apart from mirroring the unpredictable nature of online shopping, our project also reveals differences in culture and identity. We interviewed people from different locations, as well as age, ethnicity, and gender. There were older, ‘geekier’ people at Sim Lim Square where I interviewed, and Felicia interviewed younger, more ‘trendy’ people at LASALLE and SMU.  All of this variety made our end results totally unexpected.

Initially, we wanted to have the model put on the outfit at the other end so that the stranger would be able to see the mystery outfit they had created and rate it (like how an online shopper might leave a review). However, Yueling and I decided this wasn’t going to work out, because there was really long awkward silence with the first man I interviewed when she was changing at the back, and decided to scrap this idea. This was an example of an unexpected element that arose during the on-site performance.

Another unexpected element that arose was that people were really taking it seriously to put together a stylish outfit. We thought that with the vague keywords that we gave them (akin to online shopping, where clothes are often described with vague keywords and end up not really looking like how we expect them to be in the photos), that they would just take it as a fun experiment and put together very wacky combinations, but they actually kept asking for so many more details! I explained to them that the descriptors were supposed to be vague, but they still tried to curate a more put-together outfit instead of the whackier outcome we expected.

Apart from paralleling online shopping, this project was also influenced by Blast Theory’s principles of integrating the virtual and the real world together, through specifically using Facebook Live and Instagram. Perhaps Felicia and I were the interviewers as we had done precisely this, interviewing people on the street, for our previous Tele-Stroll project. On top of engaging a physical audience, we engaged the virtual audience through our Instagram polls on our instagram page where they voted for their favorite outfits, ultimately resulting in Farz being the winner. In doing so, we empowered the people on the street to be designers, and gave power to the virtual audience in deciding the ultimate, most fashionable outfit as well. Both audiences were a sizeable number, perhaps the virtual audience more so (at over a hundred followers!) because they could vote at their convenience, as opposed to the people on the street who could have been in a rush and might not have been as willing to participate. 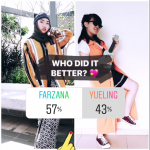 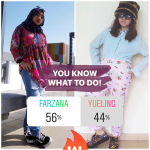 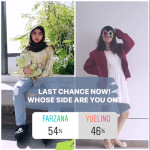 We also drew inspiration from collaborative works such as Yoko Ono’s Cut Piece, where the audience is given full control of the outcome. Therefore, our project was innately social in that we could not have gotten the outcome without the participation of the people on the street. In fact,  we were more of the bystanders in this project – every aspect was decided by the audience, except for small details such as the locations the models shot their outfits in (to be posted on Instagram) in, and the aesthetic of the Instagram curated by Felicia.

To conclude, our outcome revealed interesting differences between demographics (the older demographic preferred brighter colors, whilst our younger demographic preferred monochrome, more “chic” colors). We designed an interactive experience through the use of Facebook Live where our audience and model could see each other, along with a mediator in the interviewer. Lastly, we involved our audience both in real life (interviewing them on the street) as well as online, with the voting.

Link to our video!: https://www.dropbox.com/s/dscw9ljl2ncnhpk/main_FINAL.mp4?dl=0