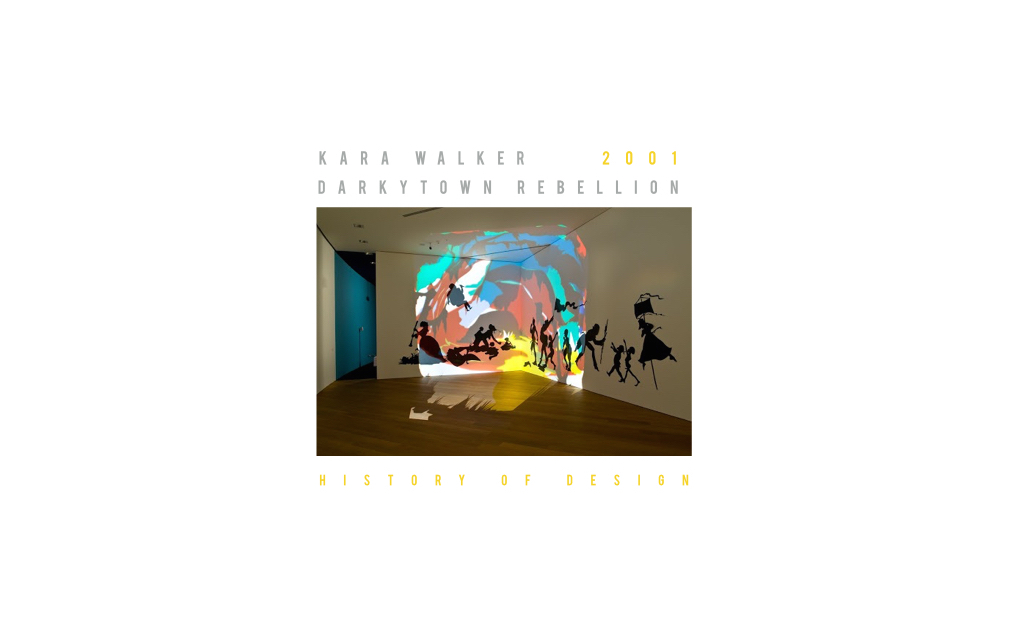 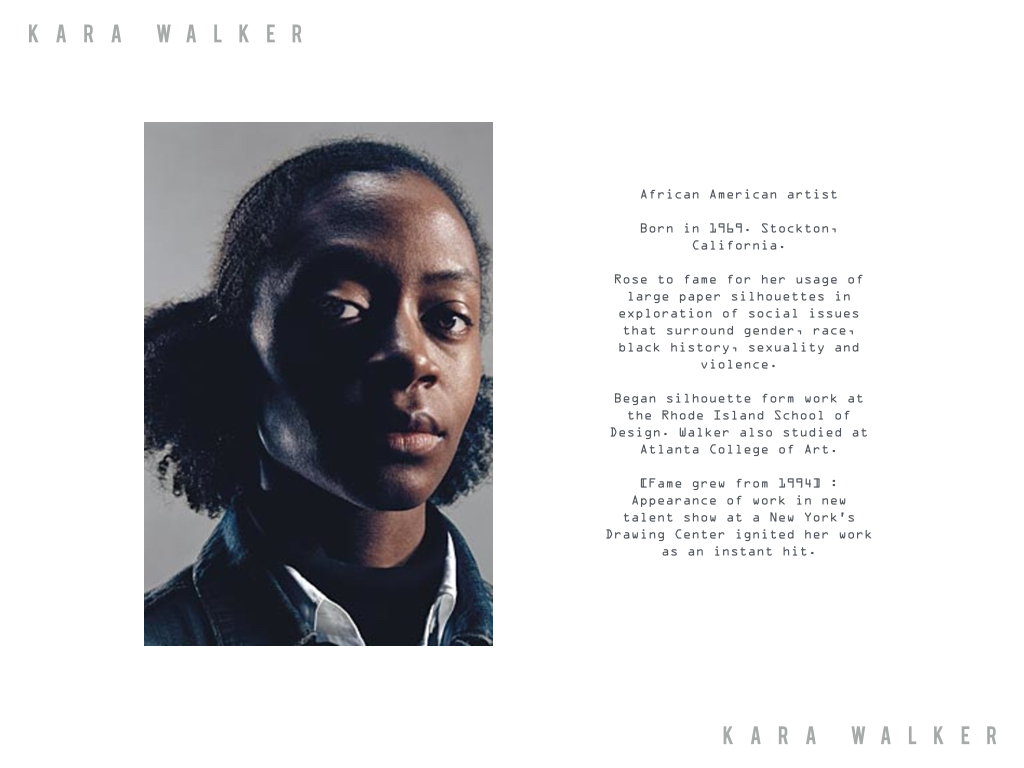 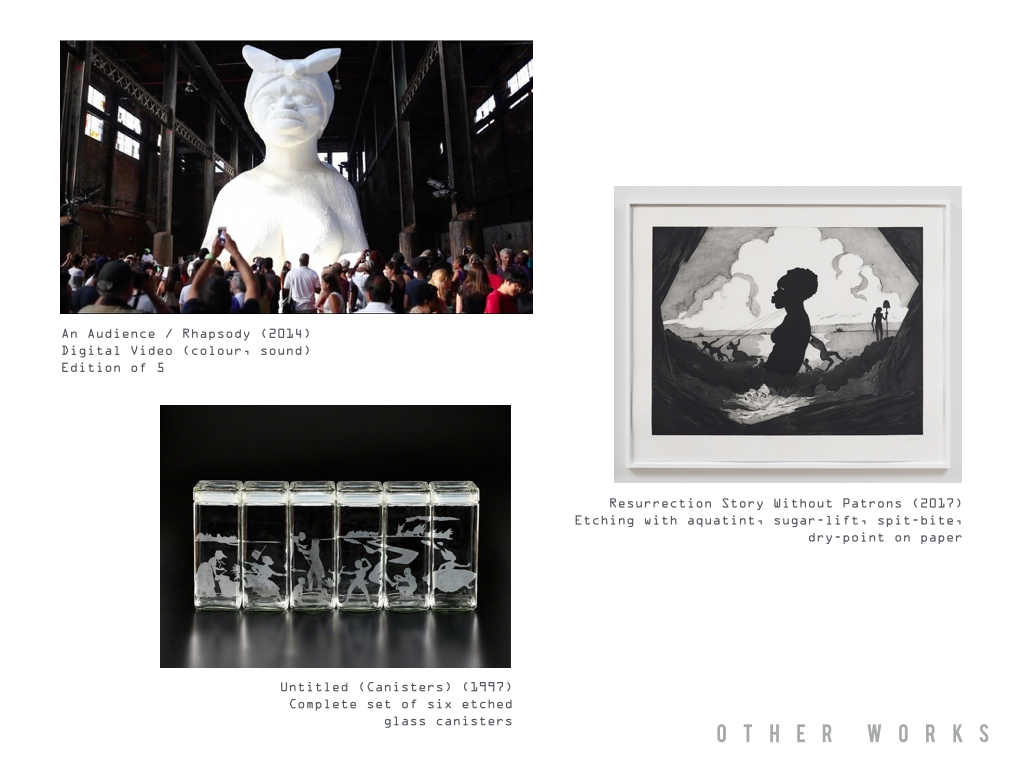 With this final hyperessay assignment, I decided to focus on an artwork belonging to the contemporary ages — Kara Walker’s Darkytown Rebellion (2001). With this installation art, the artist brings about the issue of, while also raising questions regarding racism and race affirmation. Darkytown Rebellion, a stunning installation of brilliant colors contrasted by pitch black silhouettes, demonstrates a dramatic rebellion that not only creates controversy with its horrific scene laying in front of its viewers but at the same time, seduces its audience. Darkytown Rebellion, completed in the year 2001, has been created through cut paper and projection that is casted on one of the gallery’s walls. The dimensions of the installation are 4.3m x 11.3m and it was displayed at Musée d’Art Moderne Grand-Duc Jean, Luxembourg, occupying a 37 foot wide corner of the gallery. 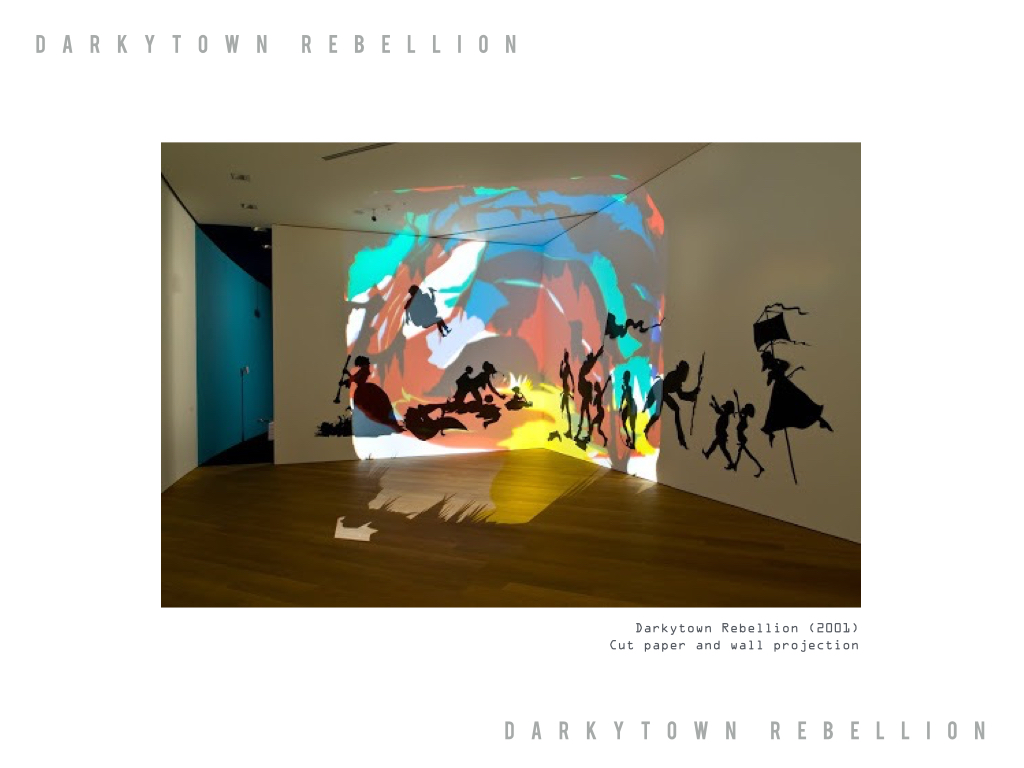 The installation is made up of over a dozen characters, characterised by their nightmarish actions and appearance, that is shown off on a single plane. Some examples include; a figure standing upright over his own severed limb despite his bleeding leg stump and bones that seem to protrude from his very own hips. Another figure, also characterised by a severe limb himself, is rolled on his back. Violence is also exhibited within this work as a woman seen with a bonnet and voluminous hoop skirt, attacks a smaller figure (assumed to be a baby) also rolled on his back with the use of a long, plunger-like instrument.

Kara Walker disguises her elements that may raise questions such as about gender or age, which is of complete irrelevance to the artwork at hand. Instead, she diminishes any interior detail possible, allowing for her audience to redirect their attention to questioning the actual elements displayed on site. This may include the mysterious, abstract shapes such as a particular body part that has been severed, or whether the silhouetted black puddle could or could not be blood. Kara Walker leaves that decision up to her audience, allowing them to make decisions as to what they actually perceive.

Darkytown Rebellion, the creation of a well-rounded multimedia artist, takes into consideration and is also a reflection of the historical representation of African Americans in American Visual culture. References with which Kara Walker takes influence into her work include, Brookes Slave Ship print (1789), Birth of a Nation (1915), Aunt Jemima logo (c. 1890 – today). 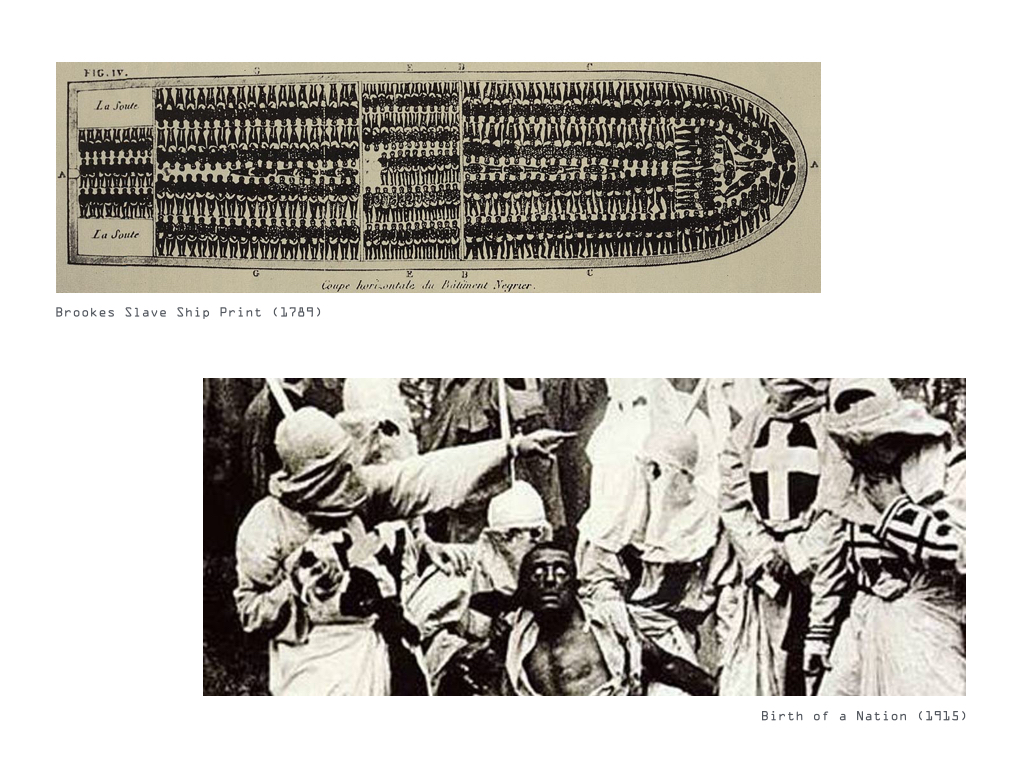 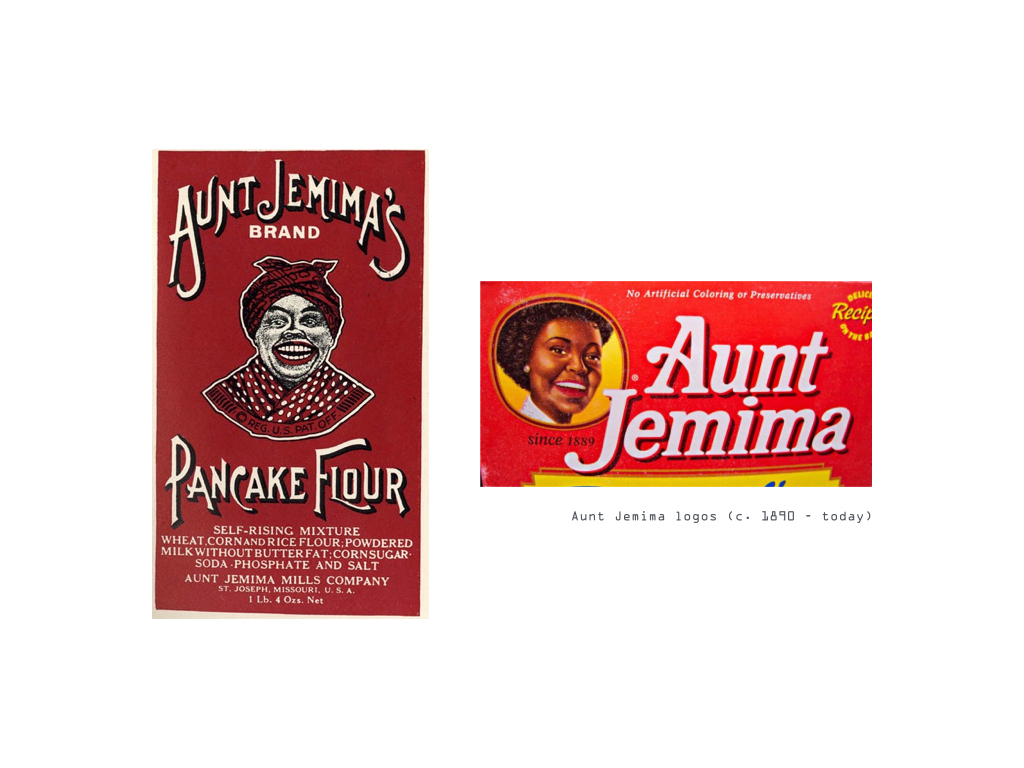 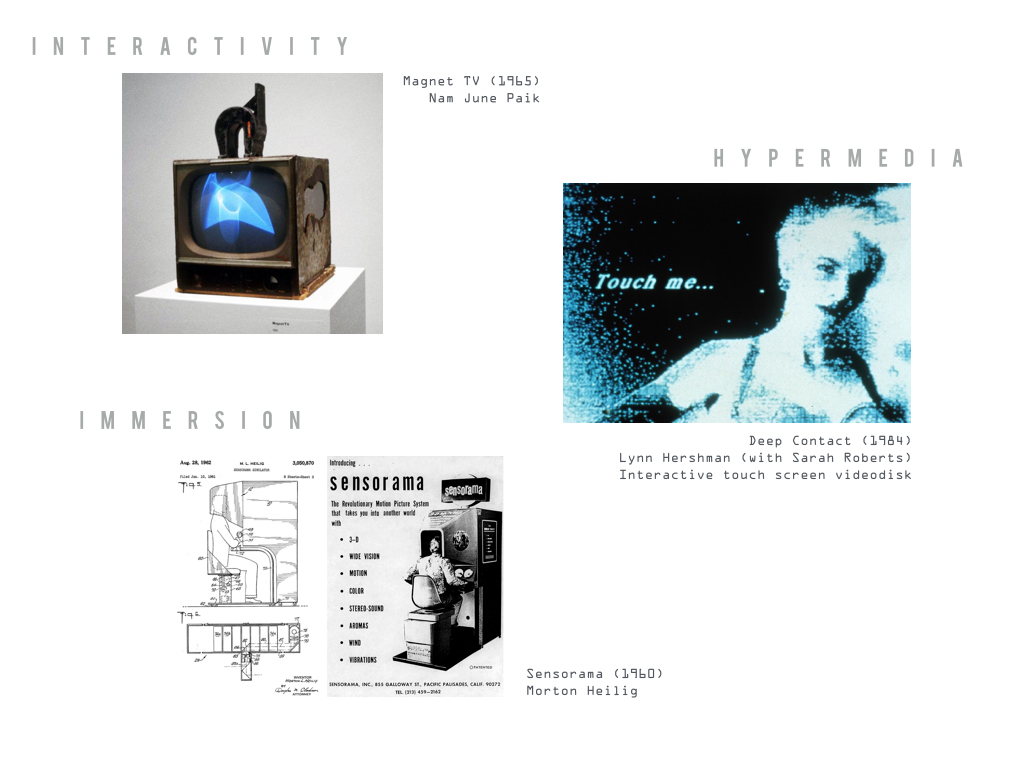 Kara Walker’s ‘Downtown Rebellion’ demonstrates elements of interactivity, hypermedia and immersion within its very own way. Over the past few weeks, we have been exposed to various artworks that elicit differing responses from their audience; either prompting them to act in a more controlled nature or to make decisions accordingly to their free will. Each experience is unique for every individual spectator depending on their own interpretation of the artwork or installation itself. With Kara Walker’s silhouetted projection, there has been some similarities and contrasting differences which I have found with some of the artworks that we have been learning in class so far. These artworks include Nam June Paik’s, ‘Magnet TV’, ‘Deep Contact’ by Lynn Hershman as well as ‘Sensorama’ by Morton Heilig.

In relation to the element of interactivity, Walker’s work with installation art demonstrates profound similarities to that of Nam June Paik’s, ‘Magnet TV.’ Although Nam June Paik requires his spectators to be involved in active participation through self-prompted creative behaviour, he also allows his viewers the control of self-perception and understanding. Similarly, Kara Walker achieves this same outlook through her display of figures to the most abstract form. She allows for her audience to question themselves about the symbolism with which each shape illustrates just as how Paik prompts his spectators to question the intention of distorting the image on the television screen with each turn of the magnet that they hold within their control. In both, the function of each of these installations becomes less descriptive, thereby allowing for self-prompted reflection and thought as one tries to interpret the message that is conveyed. In earlier times, the artist always played to win and dominate while the viewer, as a player, could never win since his moves were always predetermined in the sense that he or she could not form his or her own interpretation of the artwork. They could only readily accept the information that had been fed to them by the artist itself; somewhat like spoon-feeding behaviour. Now, these two artists have allowed for their viewers the freedom to form their own coherent thoughts. The difference between Nam June Paik’s intention in comparison with Kara Walker’s here, would be the fact that Paik has given his viewers the freedom in the form of physical motion within the context of creative behaviour (the physical touch and movement of  the magnet) whereas with Walker, physical motion is not an option but she advocates for free thought in creative behaviour (coming up with endless possibilities with the installation’s context). Both artworks also make use of the wide, open space that surrounds the artwork itself. Similarly, both installations allow freedom when it comes to perceiving them at various angles through one’s movement around the space. The distance or angle which one takes in the artwork is completely unrestrictive as they are free to walk or move around the space in order to interpret or take it all in.

In our second lesson, we learnt about Lynn Hershman’s infamous, ‘Deep Contact.’ The medium with which this artwork takes is through an interactive touch screen videodisk. With ‘Deep Contact’, the viewer is transported into virtual reality through the touch of the screen, in order to create a particular narrative. Here, intimacy is promoted between the technological form with which the screen takes as well as the nature of our world as we become hurled or taken into this virtual world where we make up our own rules. With Kara Walker’s ‘Darkytown Rebellion,’ no technological interaction is possible to create a new world. But in terms of a new dimension created through a simple gallery space, it has been formed through Walker’s play with elements. Kara Walker plays with scale when it comes to her display of silhouetted figures. Her larger than life paper silhouettes paired with psychedelic, bright and bold colors helps to create an entire new setting or dimension with the audience’s experience. As they enter the space, the audience is thrown into a captivating while at the same time, horrific scenario that is set up in front of them. For example, if the silhouettes with which Walker had used were much smaller than human scale, the effect it would have placed upon the viewers’ impression would have been entirely different. Instead of feeling intimidated and vulnerable by the actions taken shape within the silhouetted figures, the audience would have felt as if they were the one that may be in power, as they hover over the smaller bold cut outs. Because of the smart art direction with which Walker had taken with ‘Darkytown Rebellion,’ viewers are able to feel that they are transported into another space for a brief moment without the interaction of immersive technology.

In our last lesson, we learnt about the element of immersion and its importance within the experience of installation art. ‘Sensorama’ by Morton Heilig takes its audience into a completely new dimension though the focus of bodily senses, particularly touch, taste, smell, sound and sight. All of a sudden, this revolutionary art form becomes a turning point for interactive art as a new dynamic reality becomes available to the human senses simply from an unmoving, unchanging place. One is brought to artificial reality with no sense of actual time through graphical and sound content. Similar to the idea of hypermedia, Walker projects her installation of ‘Darkytown Rebellion’ with artificial lighting in order to captivate her audience into another space. She makes no use of projected sound, allowing her viewers to take in only silence and white noise when it comes to the aspect of sensory experience. Viewers are thereby, delved into the seriousness of it all as they become reminded of social issues such as racism and race affirmation that is displayed right in front of them, through abstract yet distinctive figures. A simple gallery space, is turned into an entirely new dimension through Walker’s play with the human senses.