In this post, I will address the following as listed below:

This is a step-by-step process as to how I achieved my final product for Project 1. 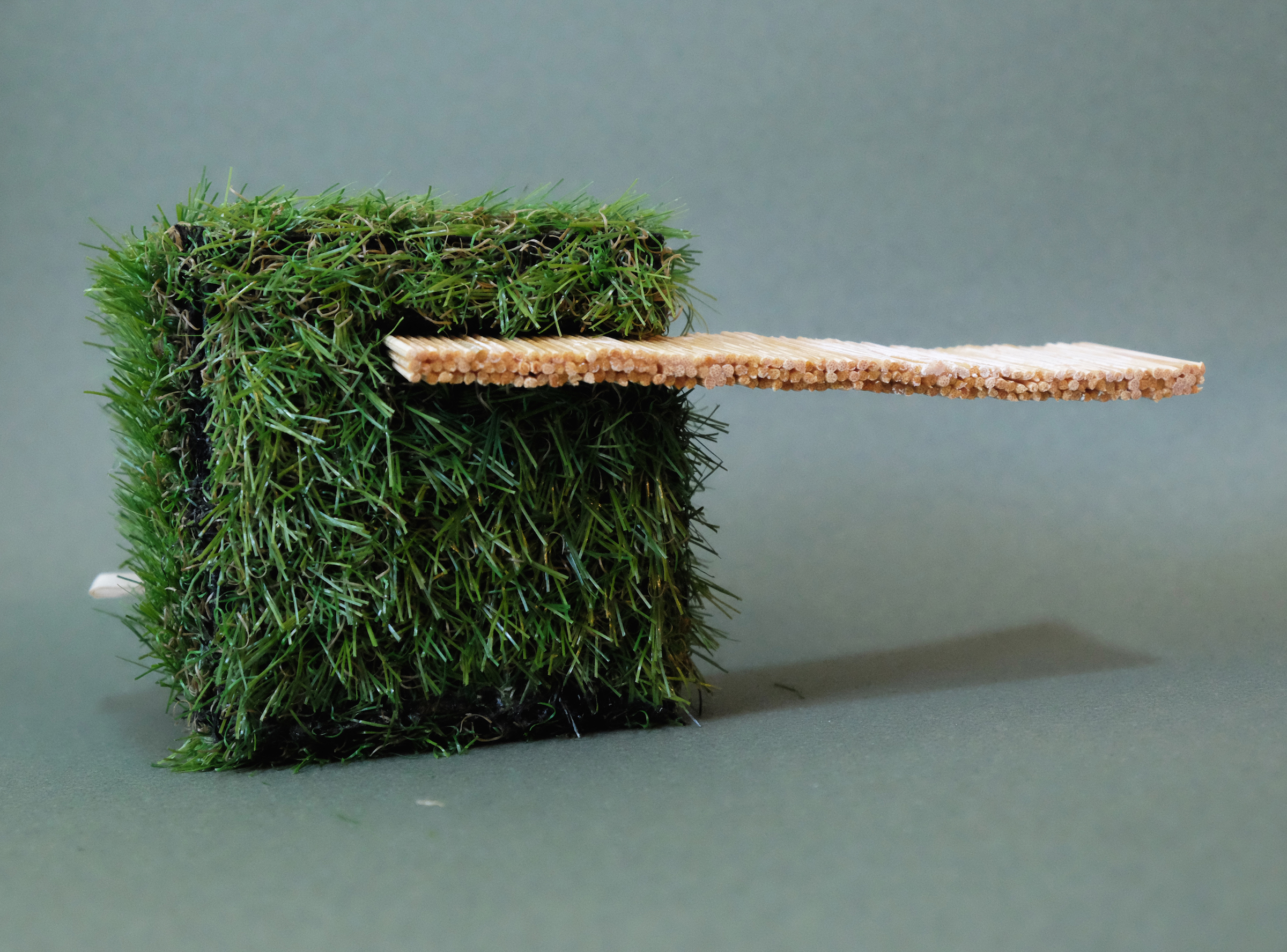 Ideas derived from the influence of Bridge to Terabithia:

My final model was greatly inspired by the sense of adventure as well as nature. The most relatable film that I found representational of this concept or idea would have to be, ‘Bridge to Terabithia.’ The movie typically surrounds its plot and setting around a magical and spiritual world filled with imaginary characters which the main cast have created and would visit whenever they wished. Both worlds – Reality and imaginary – are separated by a river creek and there appears no way to cross it other than swinging across using an unstable rope. In the previous half of the movie, it became extremely dangerous for the main characters to cross this creek to the other ‘dimension’ and a tragedy eventually arose as a result. After this tragic incident and the possibility of another in relation to his sister, the male lead started to build a wooden bridge to prevent any other mishaps while getting to this other imaginary world. The efforts to build this wooden bridge became recognized and paid off in the end when it turned into gold and a palace arose within the imaginary realm.

Influence To Own Concept:

By connecting the matter of adventure and the object of a wooden bridge which is although seemingly plain in appearance, I wanted to convey the end of the bridge as a representation of infinite possibilities. It is a pathway to wherever your mind wishes to travel to. The negative space that follows after the bridge is indefinite which makes you wonder what comes next. This imaginary world that you conjure in your mind just may be as magical as the imaginative world of Terabithia.

Ideas derived from the influence of Fallingwater:

Since the word I had to construct my final model with was ‘Cantilever,’ I decided to look up architects that used cantilevers well and in an interesting manner within the buildings that had been constructed. The most prominent finding I made was Fallingwater, which is also known as ‘Kaufmann House’, and is designed by Wright. The entire structure is made out of materials such as reinforced concrete, sandstone, steel as well as glass. The location of this architecture is in Bear Run, Pennsylvania. Wright’s aim for this house was to harmonize the architecture with the site at which it was located. More specifically, he wanted to create a unity or interaction between the nature surrounding and the architecture built.The cantilevered porches are designed in order to

The cantilevered porches are designed in order to extend over the pouring waterfall while the glass curtain walls are surrounding or are wrapped around three out of four sides of the living room, thereby demonstrating a willingness to harmonize or embrace the site around. Playing with this idea, Wright also planned for the living room and walls of the house to be constructed and laid with stones of the site area.

Influence To Own Concept:

What I got most out of Wright’s design for Fallingwater is his ability to interact with the natural site of the environment as well as the element of constructed architecture. I portrayed this by demonstrating my subordinate as a white ceramic/marble tile (a completely man-made structure), my subdominant as half being part of nature and half of man-made construction (the wood itself is natural coming from trees itself but it has also been turned into a man-made object through the cutting down of trees and forming of a bridge-like structure) while my dominant appeared to be all nature (covered in grass). Frank Lloyd Wright also played a lot with his various use of materials and texture which I too, wanted to convey in my final model. My subordinate was smooth-like, my subdominant was bristle-like and my dominant; rough and bumpy. My color scheme choices were also considered carefully and nothing looks out of place since they are all consisting of earth-toned colors.

AFTER CONSULTATION from Week 4 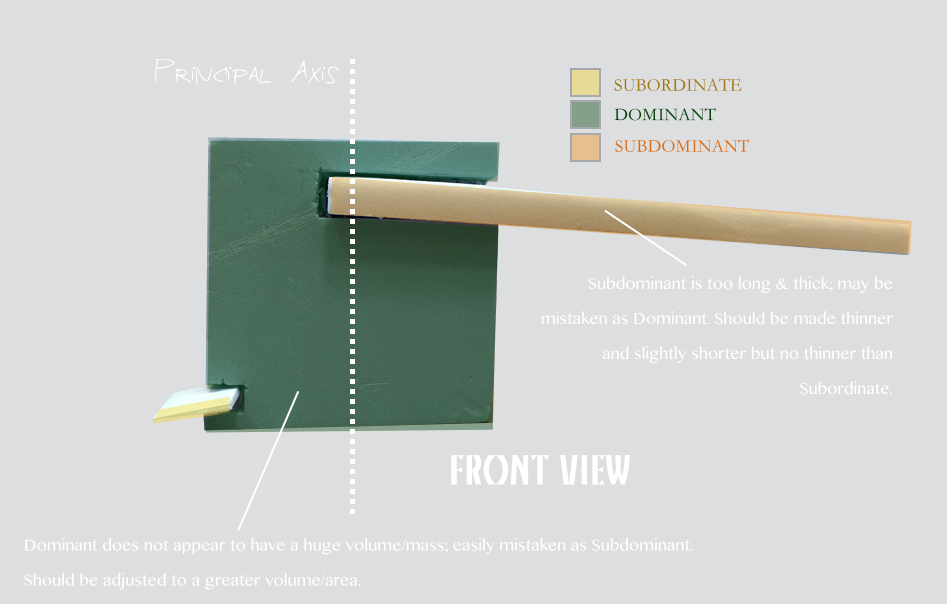 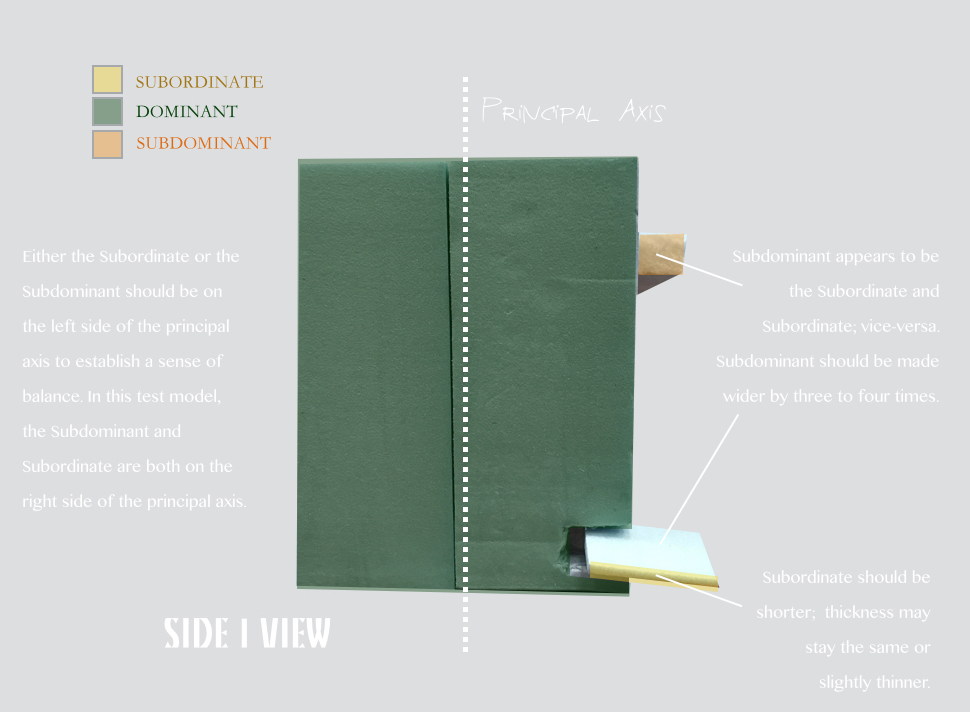 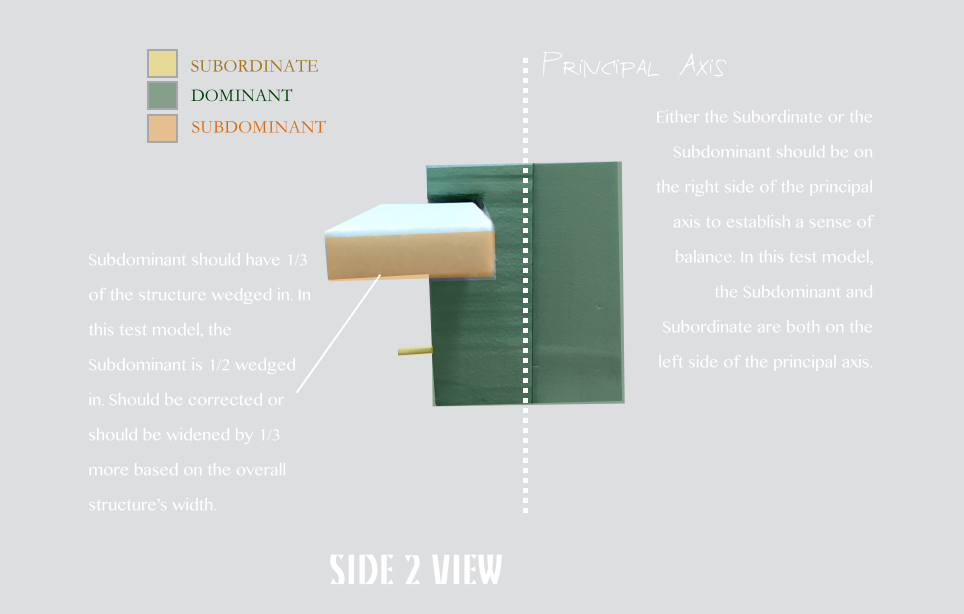 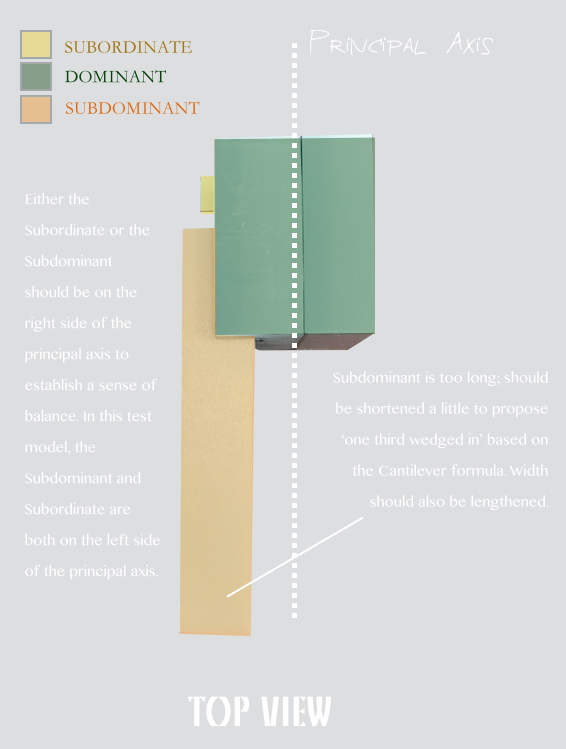 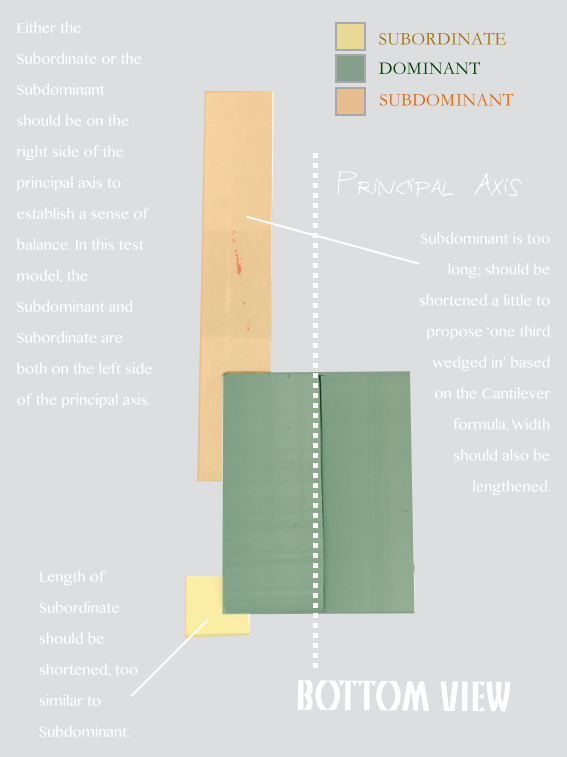 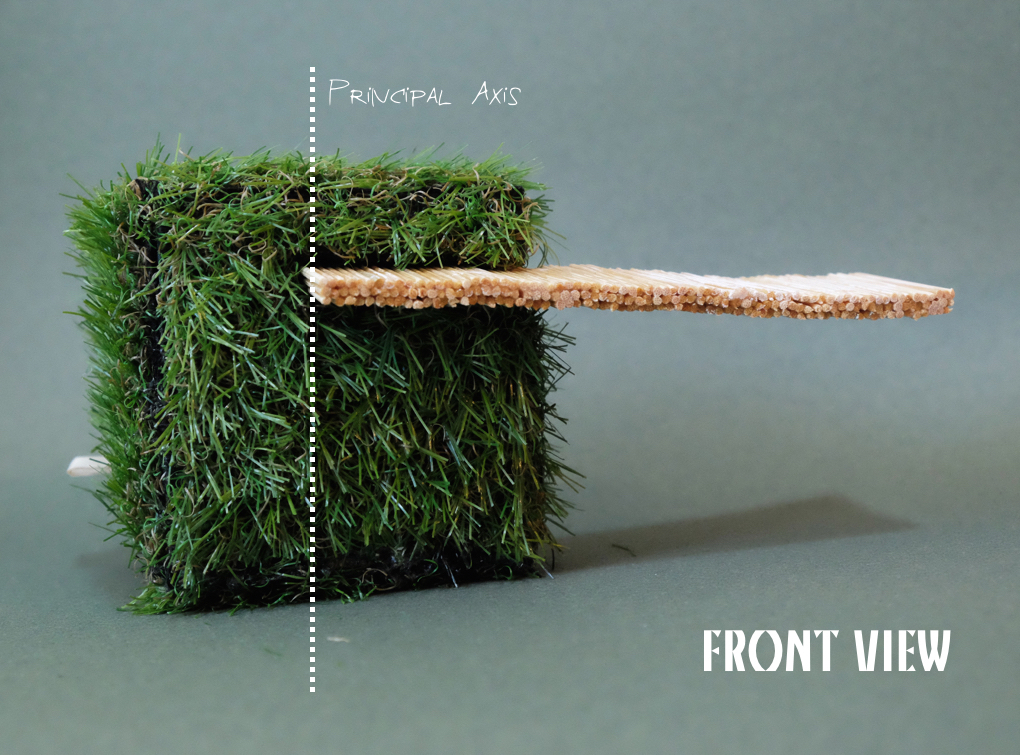 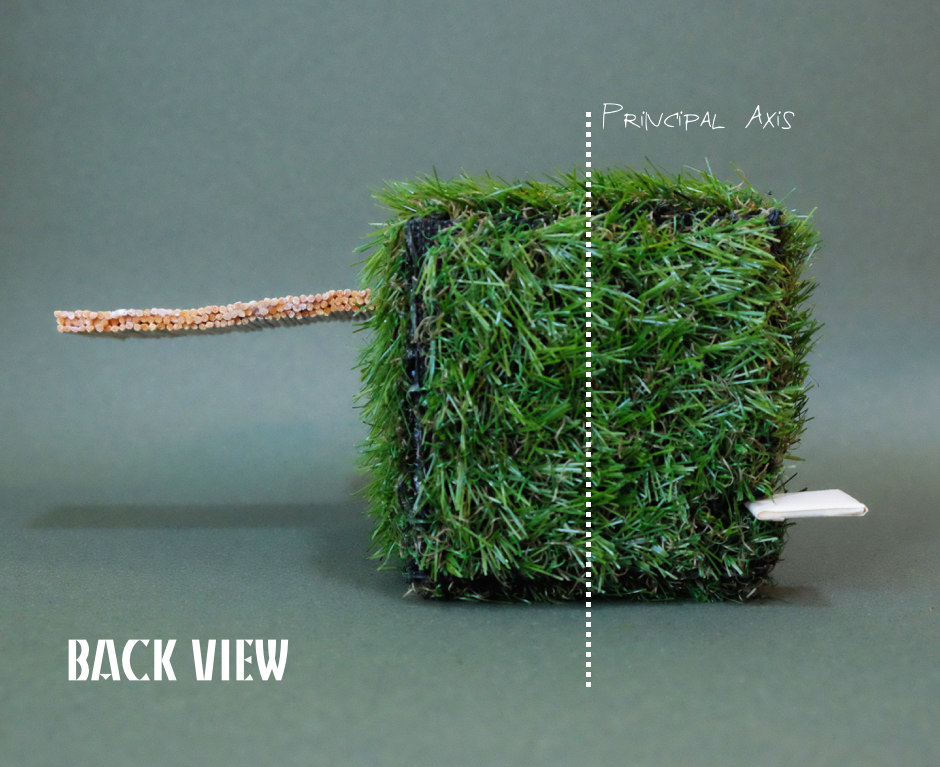 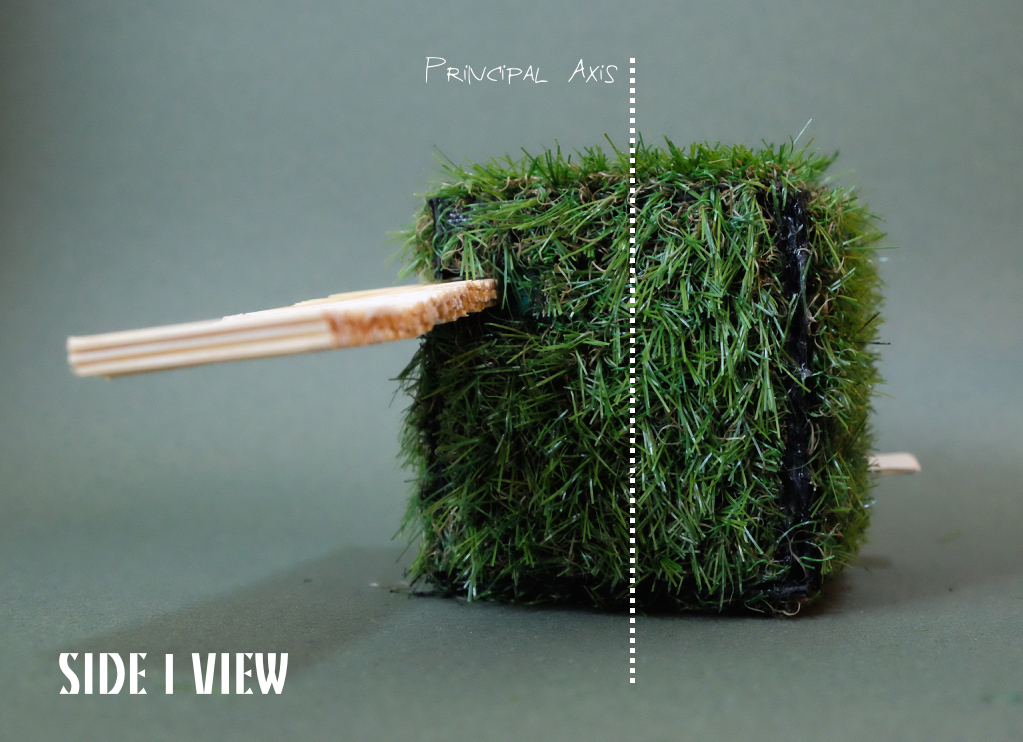 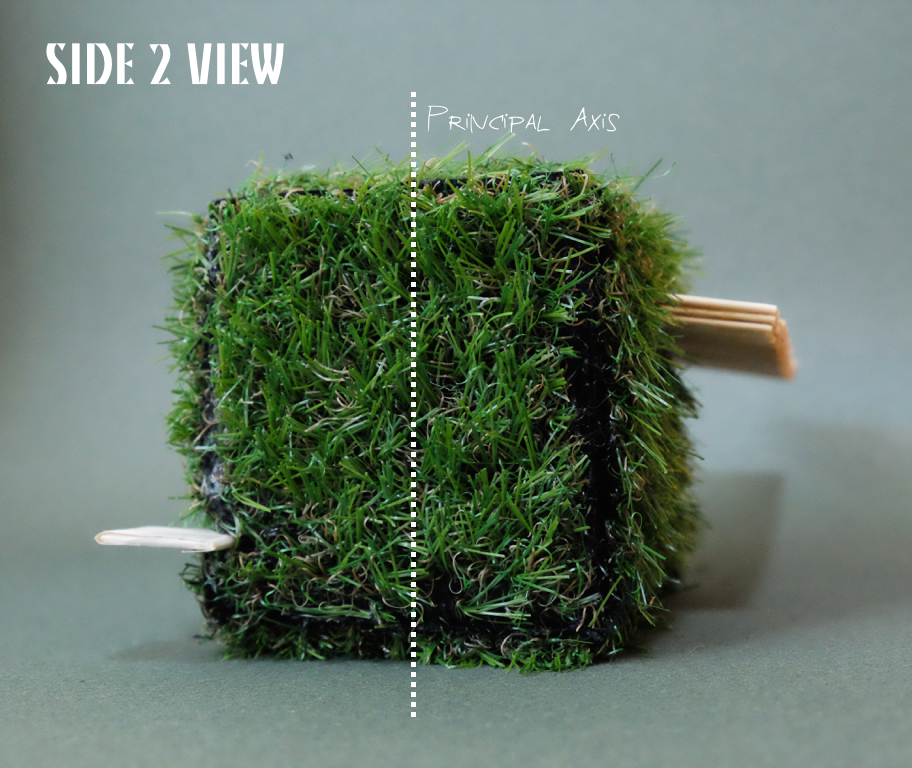 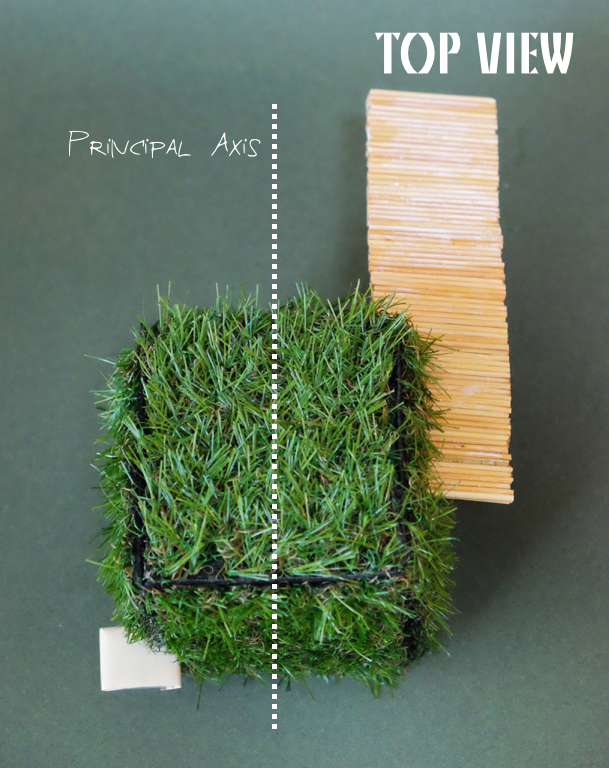 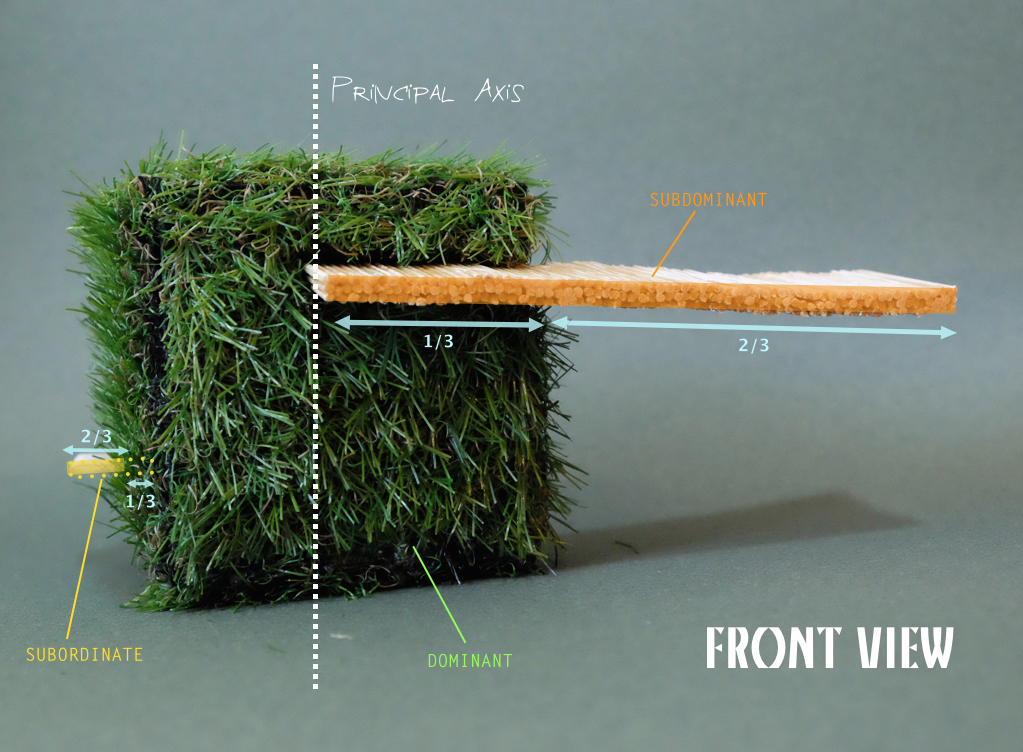 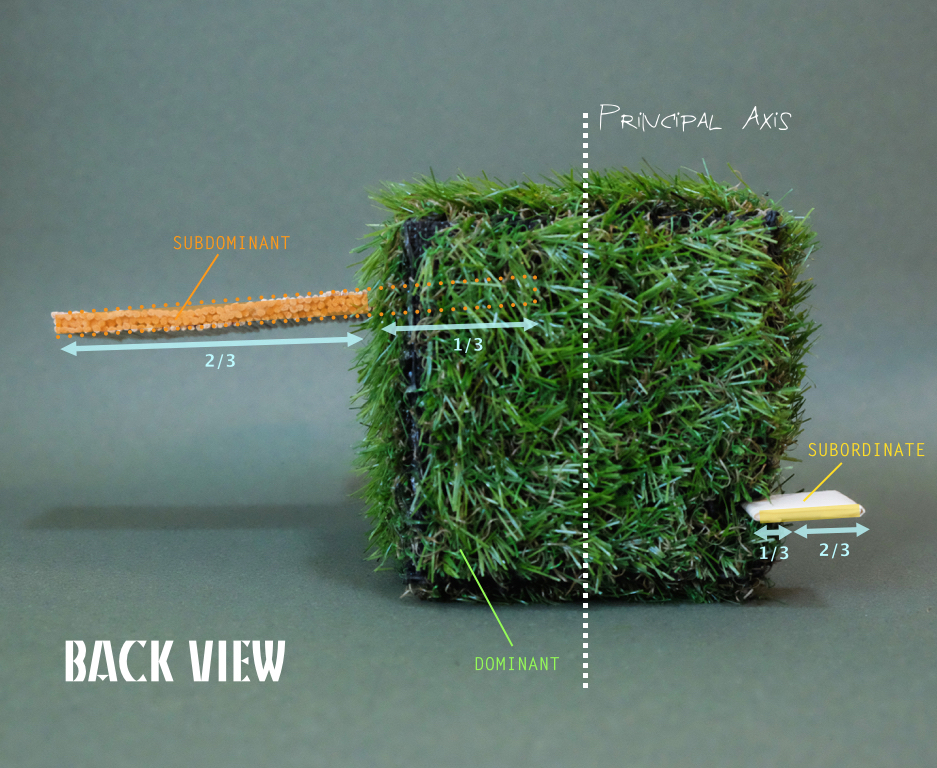 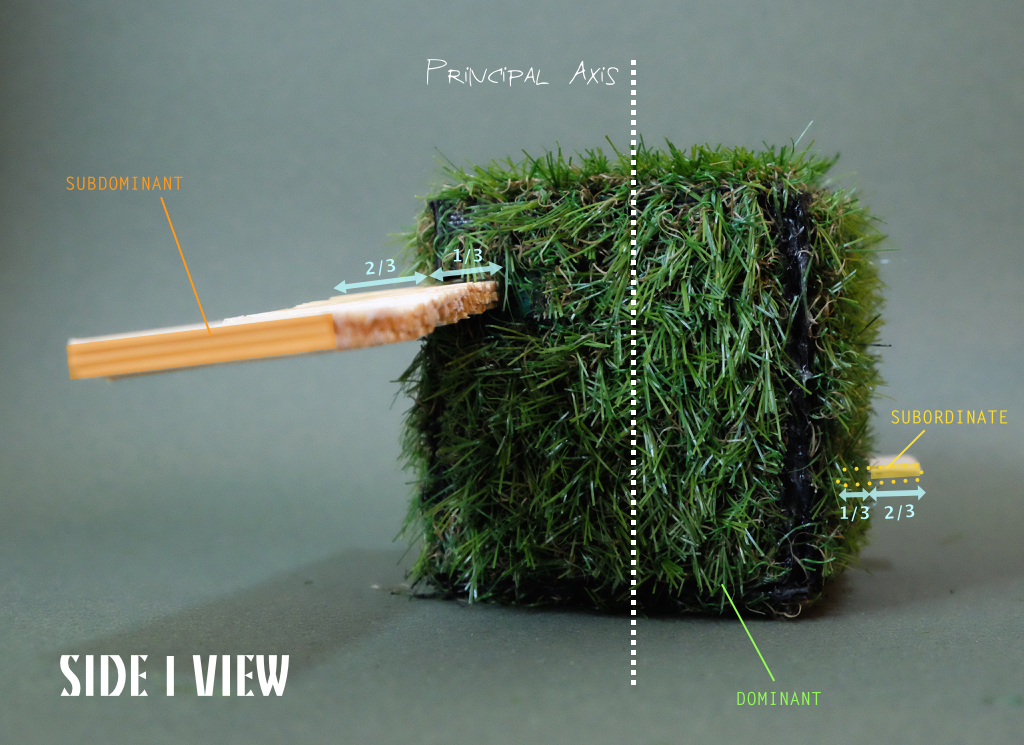 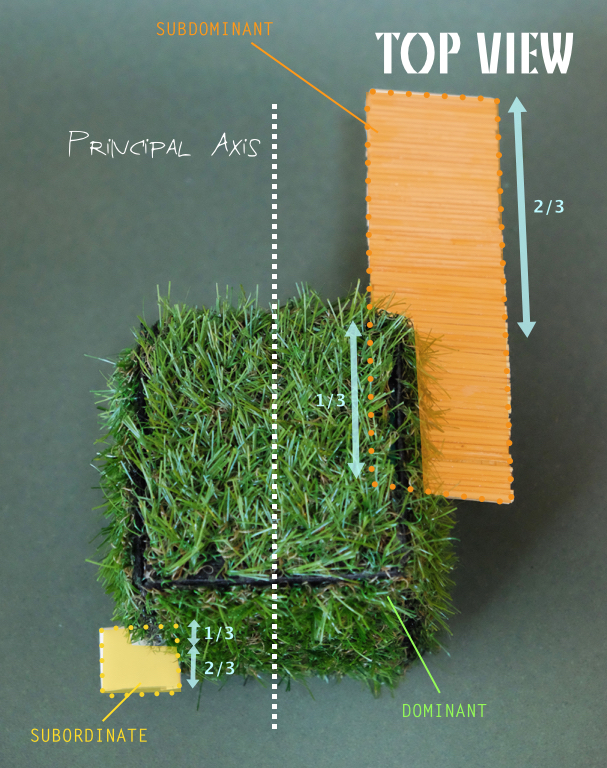 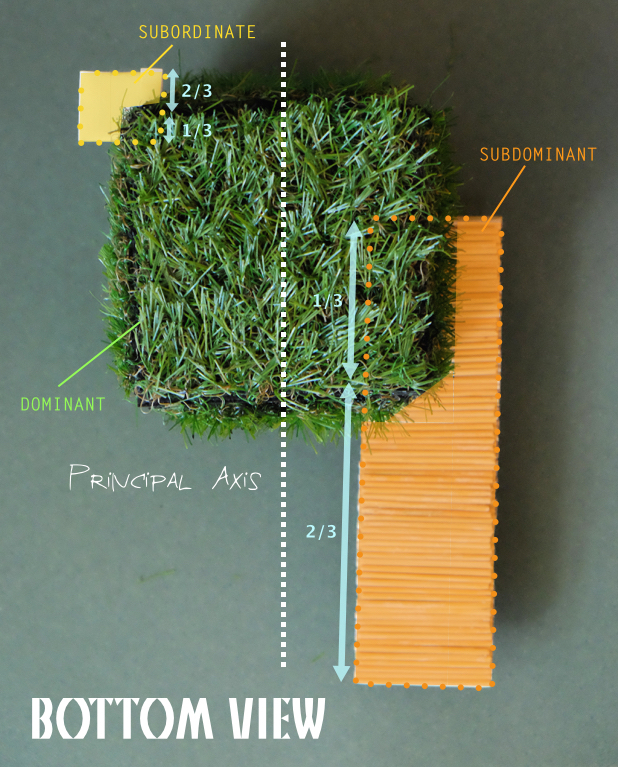 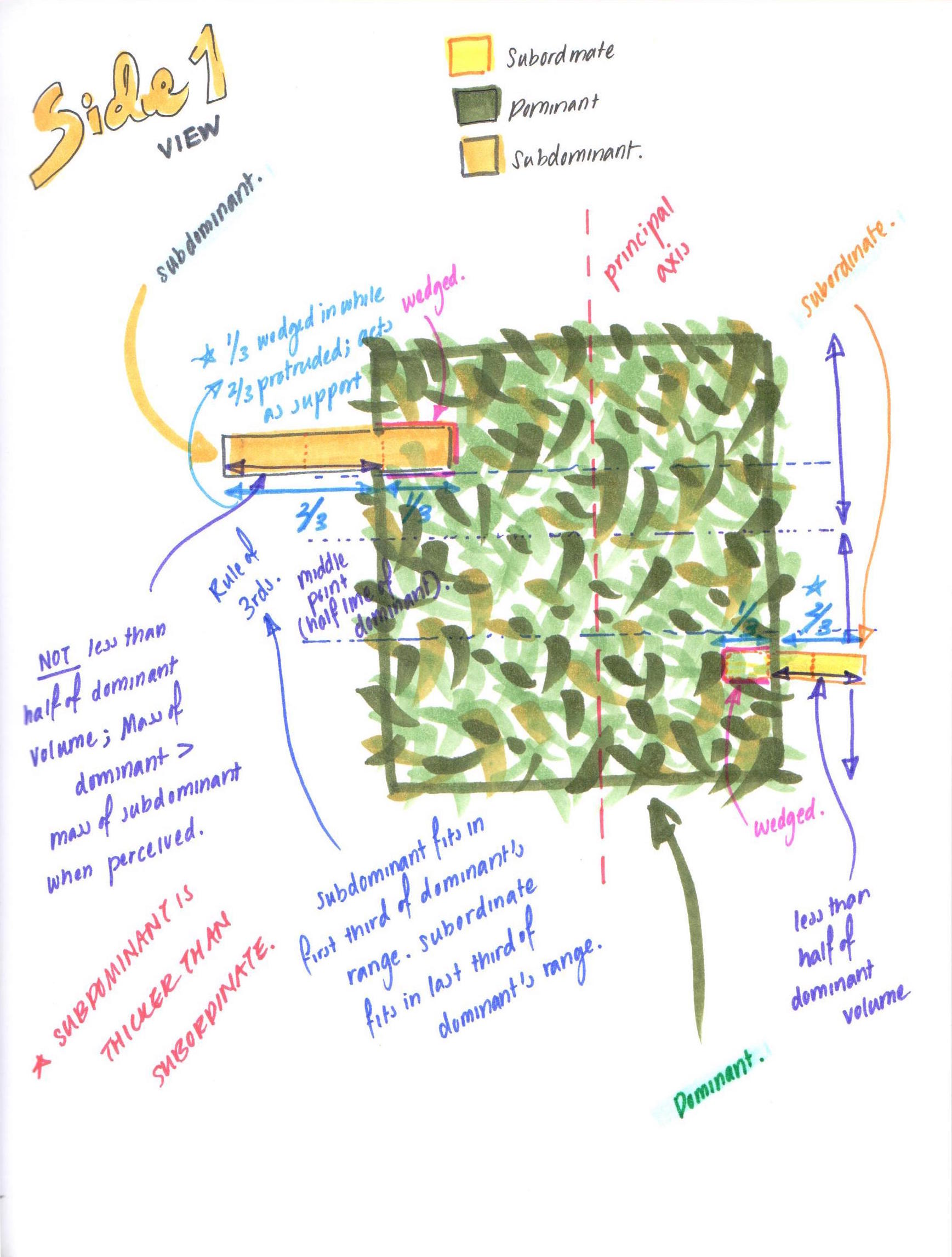 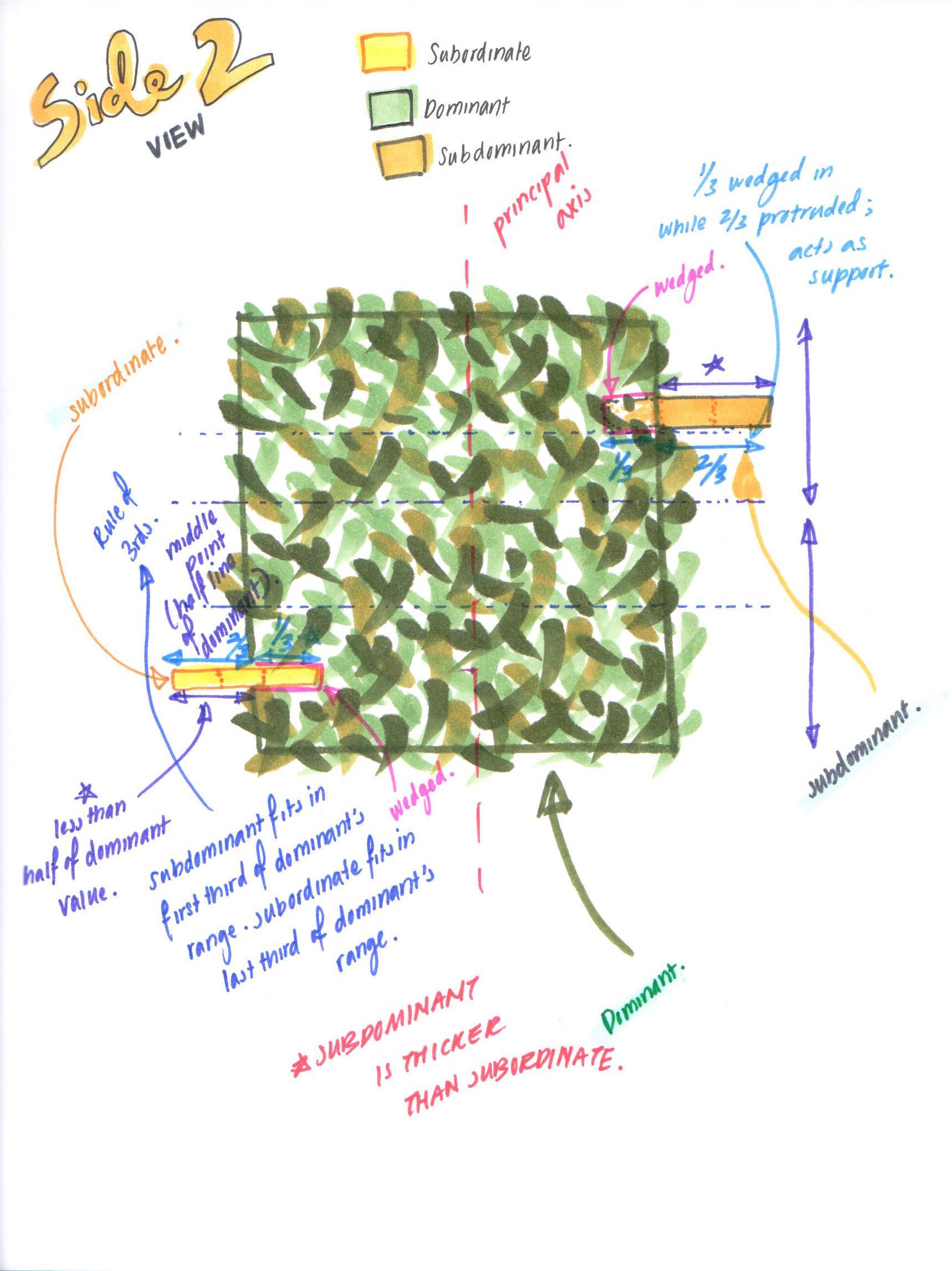 Subordinate has been shortened, Subdominant has been widened and shortened in length as well as reduced in thickness slightly. Dominant’s mass has been doubled from its original size.

(Changes made accordingly in comparison to errors found in the first model).

Lengths of all sides of both Sub-ordinates and Sub-dominants do not exceed the rule of ‘no more than half of the Dominant’s volume’.

AKA: (Cantilevers should not exceed more than half of dominant’s size).

*Exception: Subdominant, in this case, is thinner but longer than the middle half point of Dominant. The heavy mass perception given off by the Dominant leads our eyes away from Subdominant possibly being the Dominant. Therefore, both Dominant and Subdominant are easily distinguishable by themselves and do not need to follow this rule.

However, Subordinate follows this rule in my final model.

Cantilevers are composed by wedging.

No flushing can be seen. (Flushing is when one side of one block meets another side perfectly)

There is an ability to see all objects from all sides. 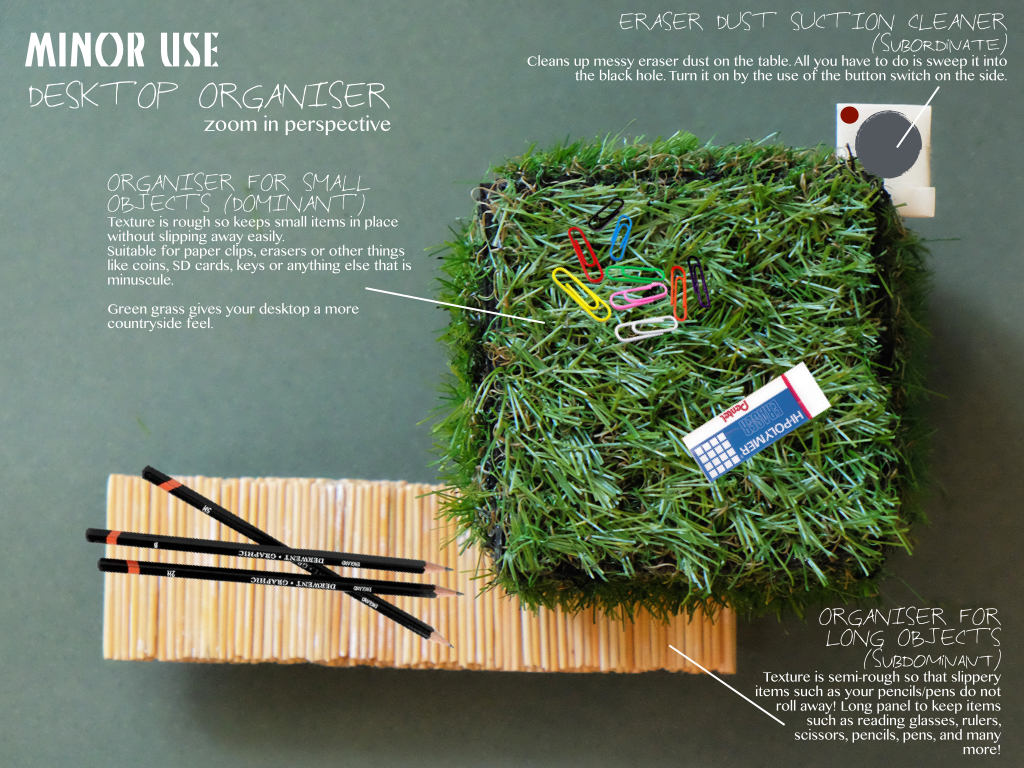 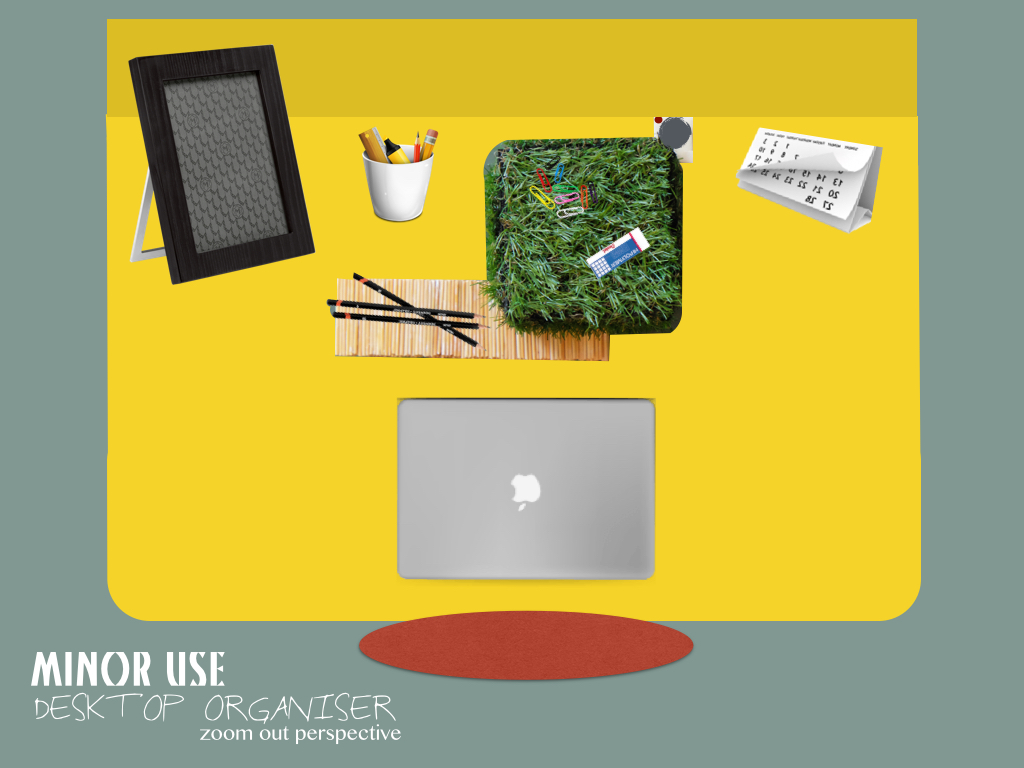