In this post, I will cover two artworks that involve the usage of time and space within their installations.

The artist was born in Puerto Rico and he is internationally well known for his works. He was trained as a sociologist which lead to him becoming a social worker in South Bronx, New York during the later stages of his life. The man was well known for his large-scale installations which were influenced and inspired by his interactions and experiences within the neighbourhood and the people amongst his workspace. Alongside that, Osorio was further driven by American Latino culture, more specifically upon the spaces, experiences and people revolving around it. The artist particularly focused upon the Puerto Ricans living within New York City. His installations were meant for the local audience but have been exhibited in mainstream cultural institutions. One of the barber chairs included as part of the installation.

Osorio addresses masculinity as inspired by his first haircut in Santurce, Puerto Rico, through the many symbols used within a space that he has recreated to resemble a barbershop. He provokes this idea of having a sense of masculine pride which can be commonly seen as ideal within Latino communities. Within this space that greatly resembles a barbershop, Osorio has placed common everyday objects such as barber chairs, car seats, male action figurines and sports articles as well as other unsettling objects such as a boy’s circumcision and even phallic symbols. His use of mass produced objects such as framed portraits of Latino or Latino American men can be commonly found within his installations which helps to localize his work and raise social class issues. There are often  thought provoking ideas of either the celebration of culture or social critique.

The video installations within this work feature Latino men of various ages from Park Street in ‘masculine’ poses which are often stereotypical. Some include older men from retirement homes to establish this issue as it exists within the different generations of Latin American culture. The content of these videos also include men crying in opposition which the public audience had reacted both with sympathy and disgust. Naum June Paik was heavily reliant upon his curiosity to understand and develop works concerning new media in relation to the era’s situation during that time; the evolving of technology. It was in the 1960s that Paik wanted to incorporate televisual technology within his installations and it was then that the artist was labelled as the father of video art.

The evolvement of television continued from the late 1960s onwards and Paik, through his exploration with this new medium, created major works that travelled from Seoul to Europe and finally the Americas. He found ways to disrupt this medium both within its interior as well as the exterior when placed in galleries, museums or even experimental TV labs. Major works of Paik’s include TV Garden from 1974 demonstrating an installation of television sets placed in arrangement with live plants inside a museum space. The videos displayed on the television screens showed his 1973 collaboration with John J. Godfrey as they montaged performers around the world within the video clip. The artist had set a brand new standard for site specific video installations which later influenced artists such as Bill Viola who is well known for his video and sound installation of, ‘The Crossing.’ 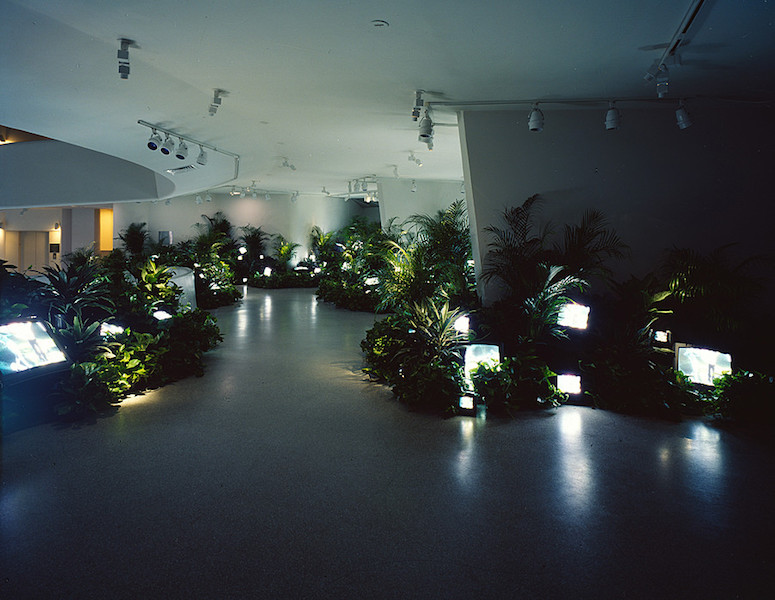 Pepón Osorio’s, ‘No Crying in the Barbershop’ incorporates the usage of non linear time as it portrays a back and forth feed with men of varying ages (young, middle-aged and elderly) crying in reaction to previous videos showing stereotypical masculine poses made. Here, time jumps back and forth in an odd rhythm showing crying and age in a non linear time.

On the other hand, Nam June Paik’s installation of TV garden (1974) uses montage as a time element. Performers from around the world are displayed on each of the TV screens within the space in this manner. They superimpose one another while the soundtrack plays in rhythm to the flickering light of the television sets.

Both these works involve the usage of video within the on-site installation while cleverly incorporating particular objects in relation to the theme being conveyed, making the video installations fitting to the context. The installations also parallel concepts and events that were taking place during that time which makes the message conveyed much more easily understood by the public audience.

Check out the documentation of my final project for foundation 4D right here! 🙂