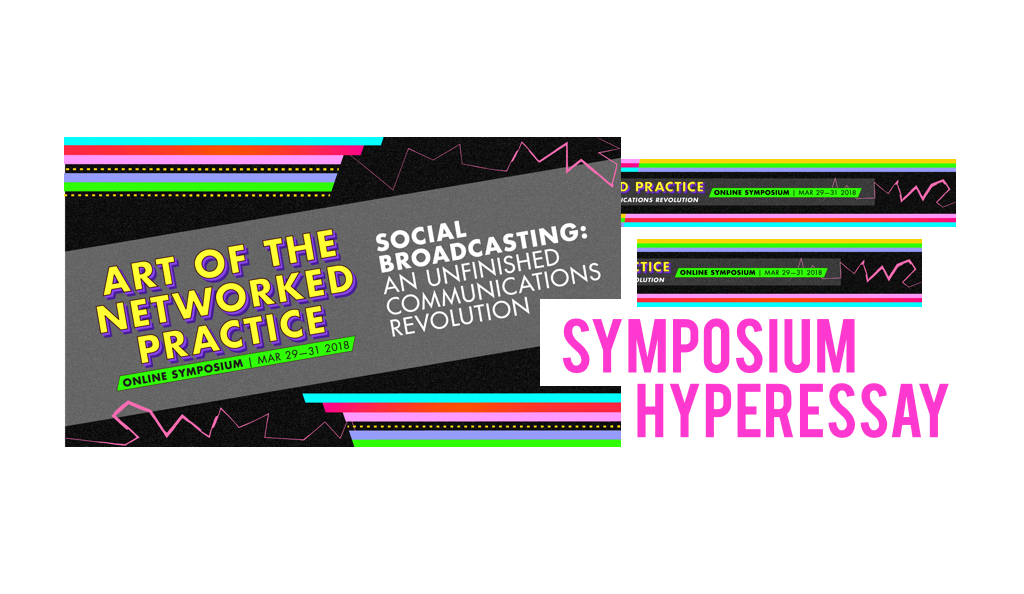 During this 3 day online conference (known as the Art of the Networked Practice online symposium), I was enabled to think about the inner process regarding each performance that was executed. Having attended Day 1 as well as Day 3 of the online programme, I had the pleasure of witnessing two online ensembles that took place. Below, I will discuss as to what prominently stood out to me about each performance.

Directed and Performed by: Annie Abrahams

Within Online En-semble – Entanglement Training, I felt that the beauty of the entire performance was really shown through various types of miscommunication and terrible connection paired with the actual ensemble which was happening online. After learning about glitch art, third space as well as DIWO, the symposium was much easier to be reflected upon and related to. Using the group webcam function supported by what seems to be the social platform, Skype, Annie Abraham and other collaborators who took part within this online ensemble demonstrated DIWO collaboration on a space that wasn’t physically placed, therefore creating a third space from scratch. Glitch became a prominent factor within each online performance and came in the medium of lag in video and audio content which initiated chaos, impatience, miscommunication and confusion from the chat discussion log participants as well as the collaborators as well. It was obvious that the progress of the performance was meant to run with everybody in sync with one another. However, I felt that disruption as a form of unexpectedness greatly contributed towards the artwork’s originality. Just like the Glitch Manifesto article we discussed within the semester, instead of looking at such as an unfavourable outcome, why not embrace it? The outcome caused reactions other than that of the performance’s actual intention.

For example, in a part of this particular online ensemble from Day 1, Annie Abraham and other collaborators were meant to converse with each other through the medium of their hands and fingers. There was however, a lag on Hu’o’ng Ngô’s side of things, making his screen stand out amongst all others when all were meant to be parallel with one another and blend together in connectivity. On his side, Hu’o’ng Ngô seemed to still be focused upon the previous stage of their online ensemble; showing a wall that was white in color. The audience within the chat log almost immediately responded to this sudden change of gradual flow, which was suddenly disrupted.

One thing that I began to take note overtime as the online ensemble went on, was that the beginning was extremely well coordinated. However, as the performance went on, everything began to blur and by the time it ended, things were much more all over the place.

In another part of the performance, Helen, one of the collaborators, had a problem with her audio which ended up becoming a glitch to the exercise that was ongoing. All collaborators were meant to have their eyes closed up, at least until the point when Annie would signal to disconnect through sound. For a long while, Helen had her eyes shut while everyone on the chat log were desperately trying their best to rapidly send messages in hopes of catching her attention. The fact that the chat log audience was controlled in a sense that they could not signal verbally and only through text allowed for a greater and more obvious response from them. Their weakness began to show as the rate of incoming text was much faster every time a glitch such as this occurred. 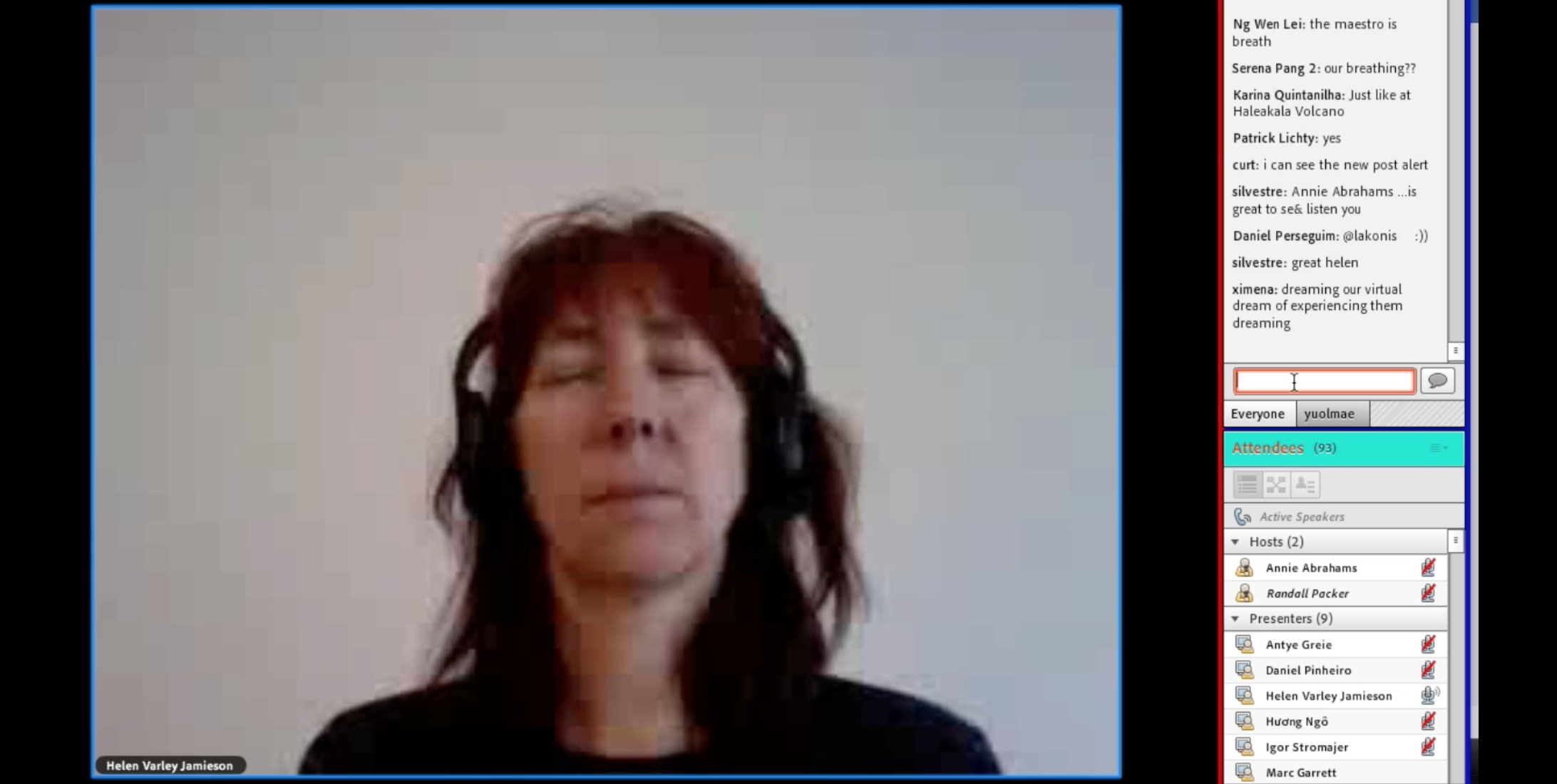 Directed and Performed by: Jon Cates 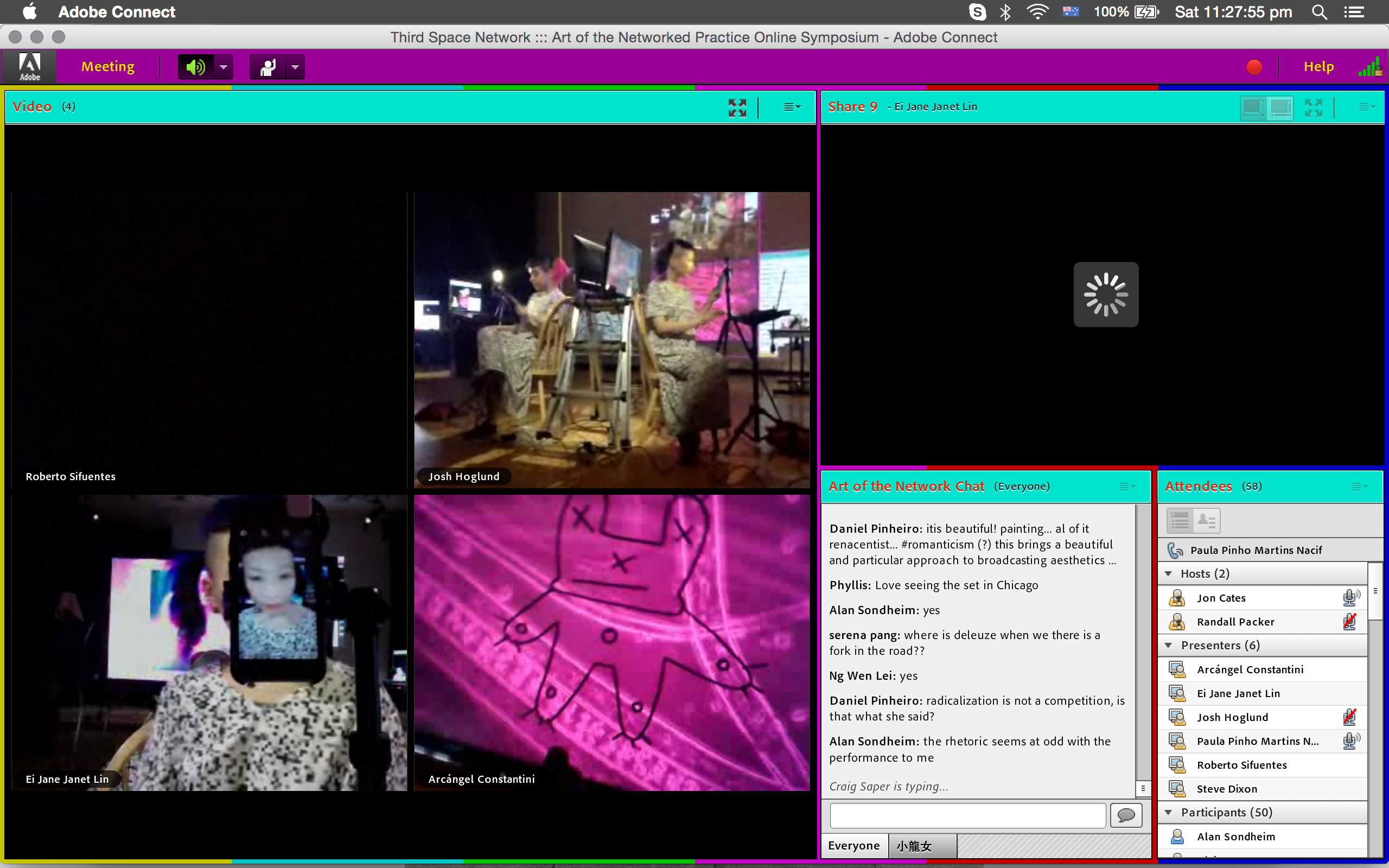 Similarly, glitch became an obvious factor within the first portion of the IGAIES ensemble. In xXxtra.Princess’s performance, two actresses recited words off of a script on Google Docs that was also screen shared for the live audience on Adobe Connect. The gradual flow of speech and reciting between the two was disrupted several times through the glitch that was Google Docs and its continuity of disconnecting phases. There was a constant push and pull of dragged silence between the collaborators on screen while the rate of action on the chat log increased every time such happened. In a sense, the collaborators, who seemed at first to have the power of speech and audio, were at their weak point, while they could only aimlessly watch on as the chat was continuously active. The collaborators who were part of the chat log were in the lead.  Due to the connectivity and glitch as such, the exchange of power hopped just as fast. The two female leads at the same time, could not step out of their acting roles.

Overall, I felt that this 3 day online symposium was truly a great experience, especially since I have never attended a lecture on Adobe Connect.