a web of tags 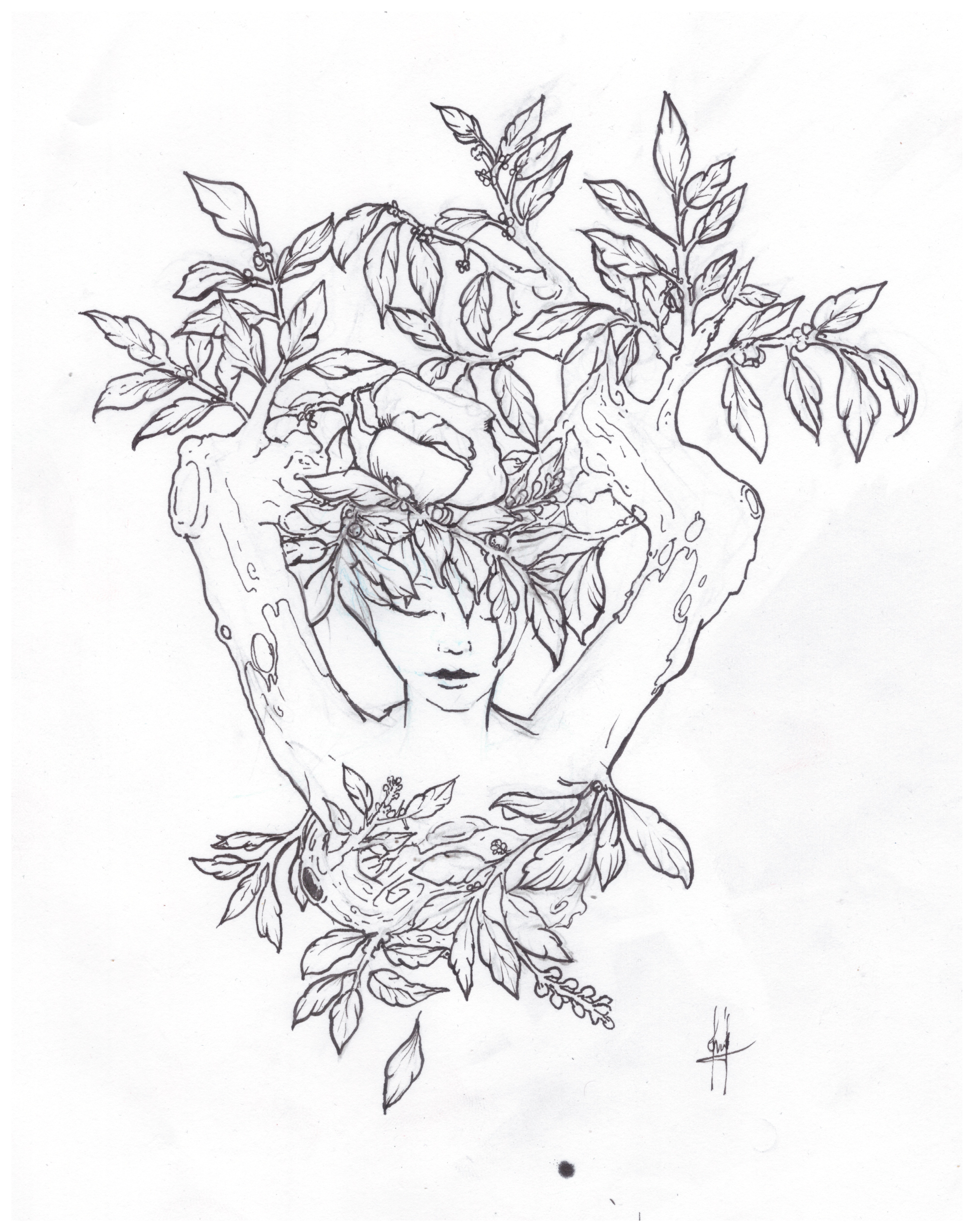 The work aims to explore the concept of monstrosity in a world of mundanity, creating a hyperbolic dystopia that brings to light the horrors of the everyday. Drawing from the sensational Sada Abe Incident that spurred the ero-guro-nansensu movement in 1930s Japan, the work is a experimental illustrated narrative that reinterprets hellish landscapes, situations and characters.

Looking to themes of horror, macabre, monstrosity, the abhuman and studies in abjection, I look to explore surrealist and absurdist illustration while experimenting with the creation and curation of narratives in different forms, informing the experience.

drawing from the works of junji ito, hieronymous bosch, edogawa rampo and makoto aida, the narrative is one that combines the visual aspects of horror and the unknown with familiar themes within acceptable society.

The Sada Abe incident in 1936 was a highlight of the Ero guro Movement. Sada Abe, a former prostitute, killed her lover by choking him in and after coitus, then severing his genitalia and fleeing. When captured, she was pictured smiling with the officer, who did not believe her until she showed him her lovers genitalia as proof.

She said, “After I had killed Ishida I felt totally at ease, as though a heavy burden had been lifted from my shoulders, and I felt a sense of clarity.” and that “(she) loved him so much, (she) wanted him all to (her)self.” Mark Schreiber argues that the national sensation this scandal produced was a welcome distraction for a Japan facing political and military tumult. 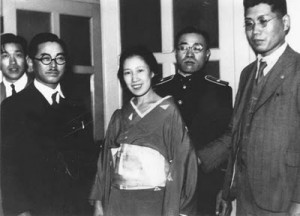 Abhuman is a term used to distinguish a separation from normal human existence.

In literary studies of Gothic fiction, abhuman refers to a “Gothic body” or something that is only vestigially human and possibly in the process of becoming something monstrous. Kelly Hurley writes that the “abhuman subject is a not-quite-human subject, characterized by its morphic variability, continually in danger of becoming not-itself, becoming other.”

Allan Lloyd Smith writes that among “the sources of abhuman Gothic horror for many writers at this time were the urban squalor and misery of overcrowded cities.

Otherwise known as Tarō Hirai, Rampo was the president of the Japanese Association of Mystery writers, and a pioneer of Japanese Mystery Fiction. Works of his include Caterpillar and The Human Chair. The work, The Human Chair, was drawn into the form of manga by Junji Ito, after his death. Rampo’s work took on a more hedonistic turn around the 1930s, influenced by the turbulent ero-guro-nansensu movement, and the influx of Western ideas. Junji Ito is a horror manga writer, inker, penciller and comic artist known for the capricious and cruel world he sets his stories in. His characters are often victims of unexplained and unnatural encounters that are relatable in a modern environment 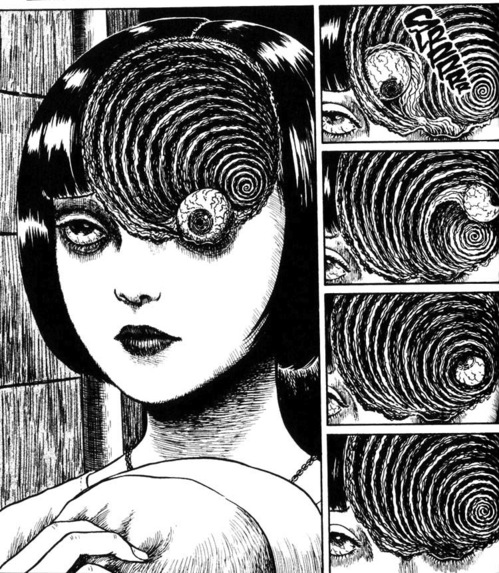 Excerpt from Junji Ito’s Uzumaki, where a small town erupts in hysteria over spirals.

In my pursuit of a narrative that involved a little more photomanipulation, I looked up Dave McKean’s work in the Sandman series by Neil Gaiman, and in Signal to Noise, a story of a personal apocalypse of a dying filmmaker amidst an imagined World Apocalypse. I also found a excerpt from Arkham Asylum that I liked. 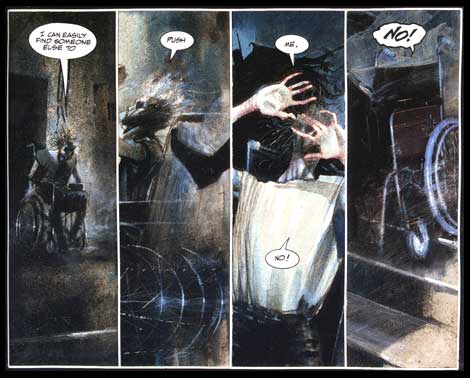 Seeing the works inspired me to produce, and spurred me to push further toward the absurdities of Boschian hell (by the way, someone has transcribed the music that Bosch depicted on a poor mortals bottom)

Poor Mortal crushed by a harp with sheet music on their posterior, The Garden of Earthly Delights, Hieronymous Bosch, 1503-04

I produced work based on the terrible phenomena of people blocking my way by forming crowds at busstops and crowding pavements, just to have a conversation, 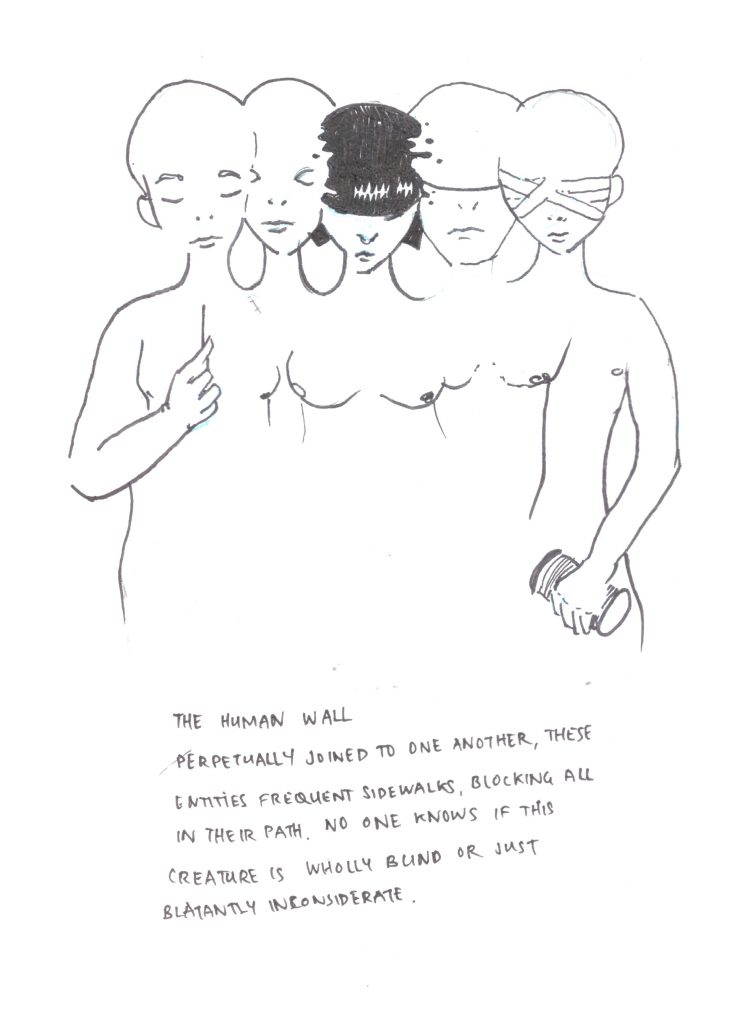 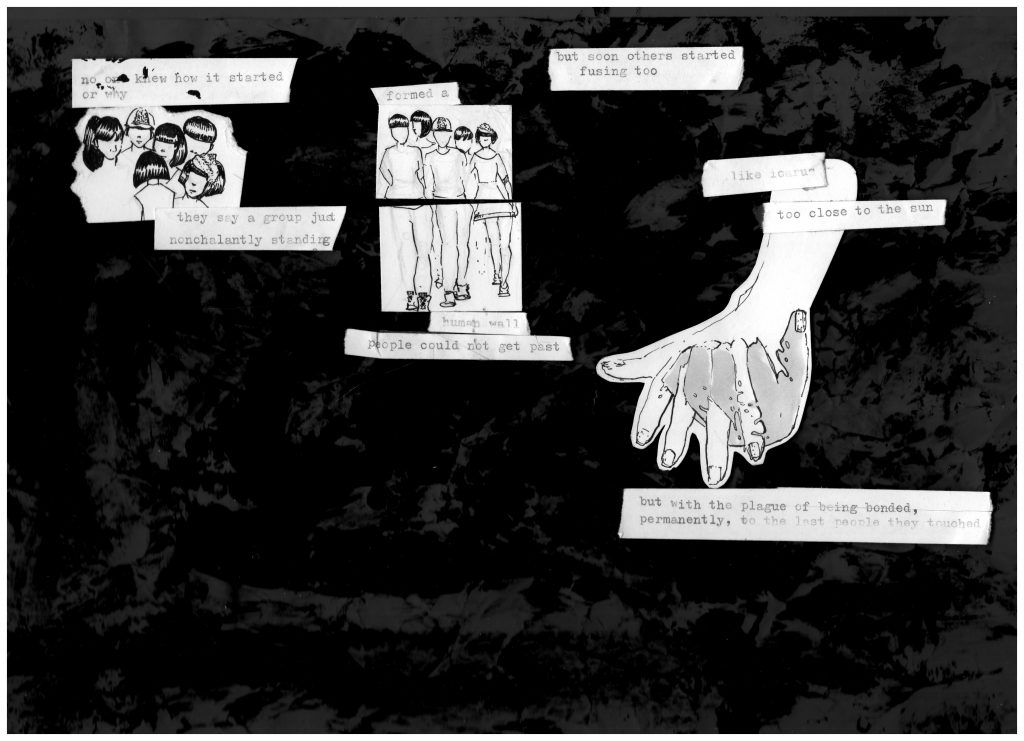 I then arranged everything on an acrylic board to get an idea of the flow of the narrative.

I also did a variety of other drawings centered around this style, and eventually morphed into something more graphic and stylised. 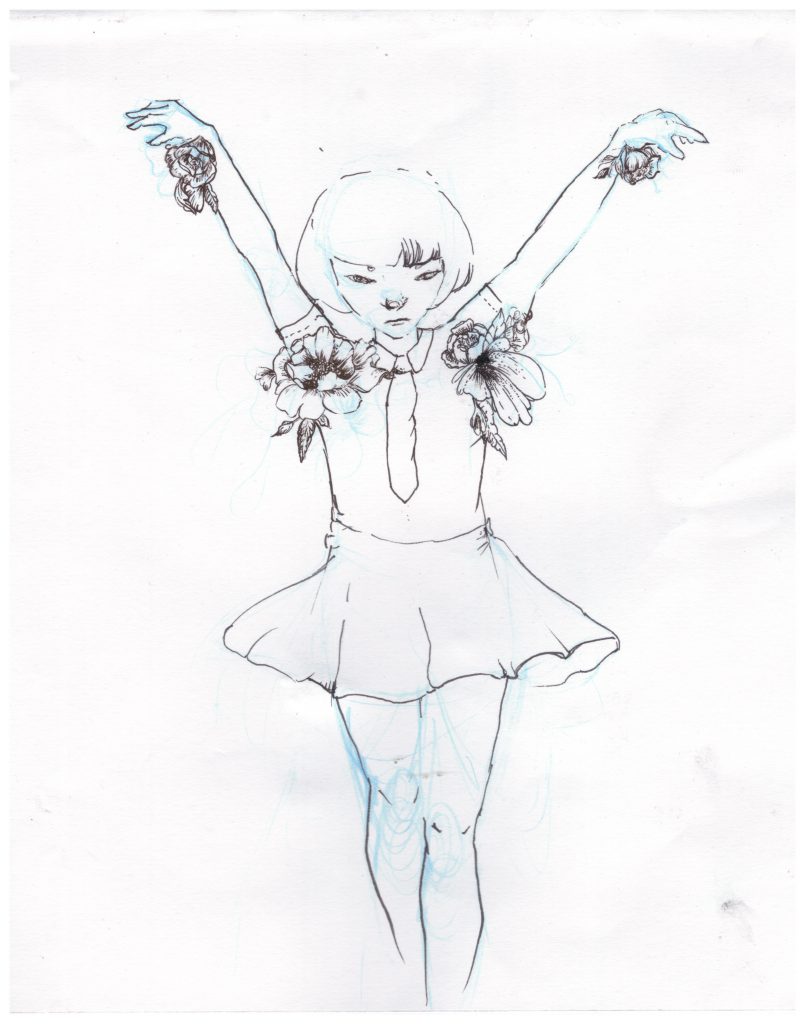 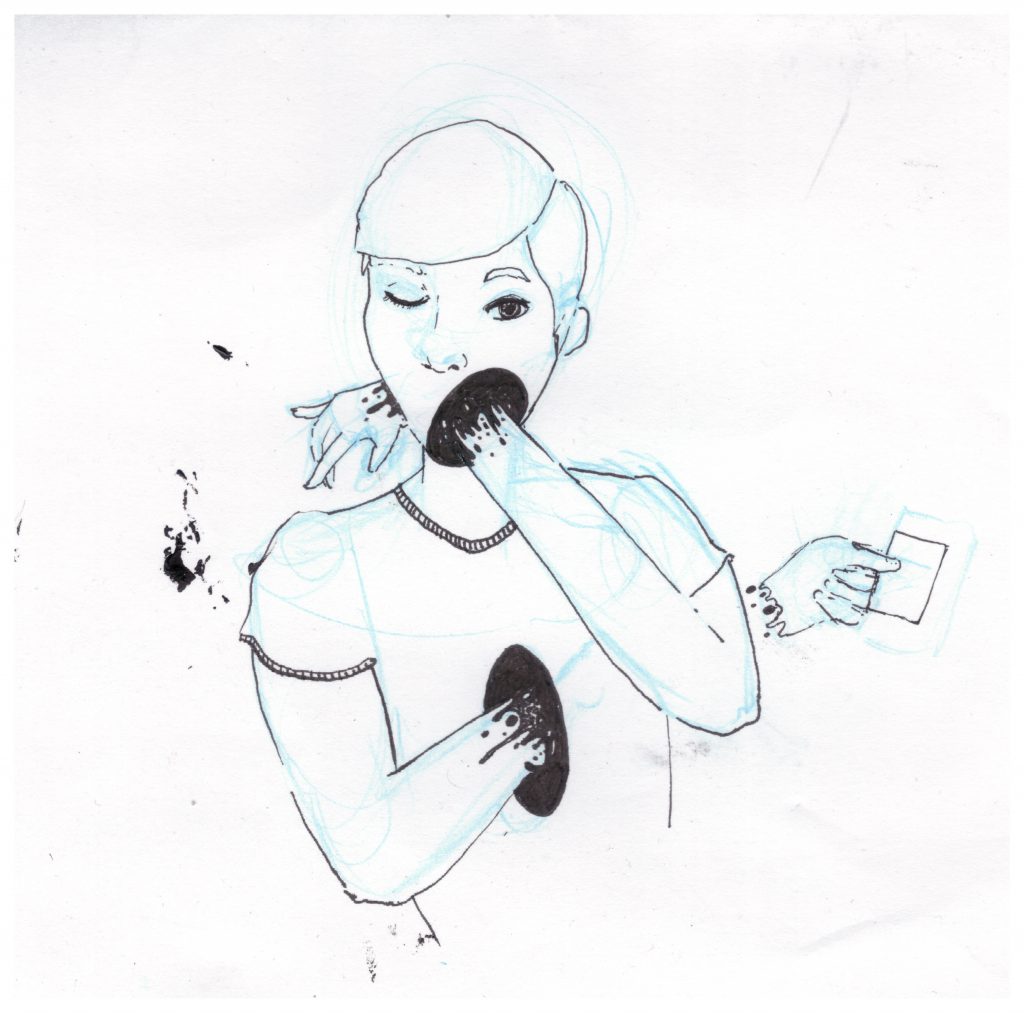 produced this, as a sample for the media wall. 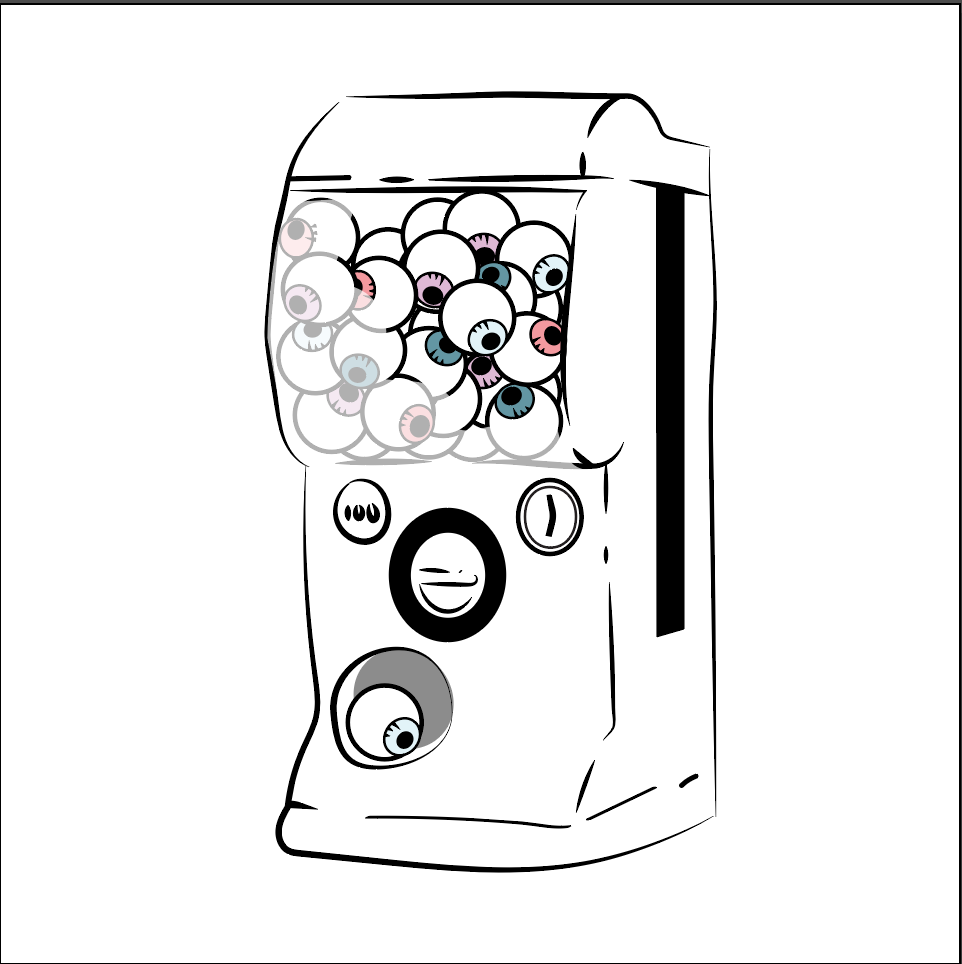 as well as something that would hopefully merge both styles. 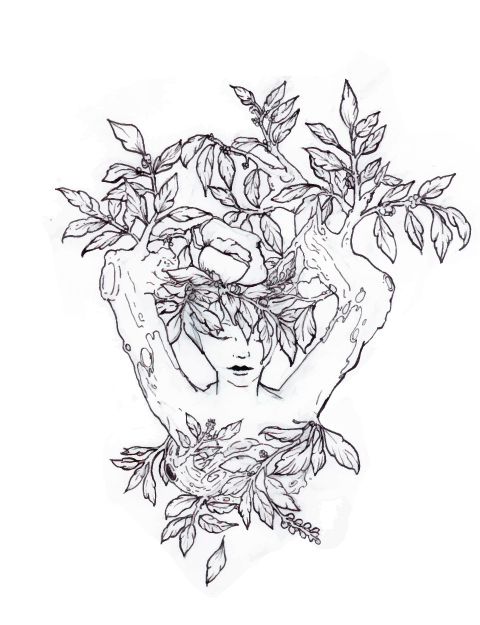 daphne of greek myth (i was inspired by the possibility of integrating myth. (i.e dante’s inferno). started to looked very Mucha.