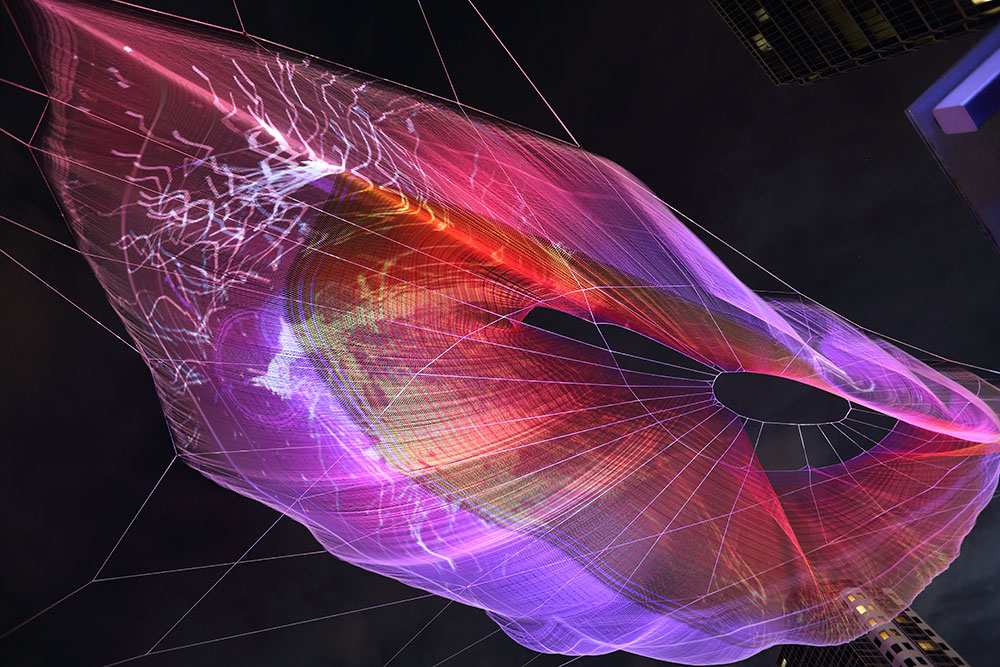 The work by Aaron Koblin that I chose for my essay is Unnumbered Sparks.

As quoted from Aaron Koblin’s website, Unnumbered Sparks is a “monumental interactive sculpture in the sky”. For this installation, he worked together with Janet Echelman, an American sculptor and fiber artist. It was displayed between buildings in downtown Vancouver, Canada in March 2014 for TED’s 30th anniversary.

The interactivity of this installation comes from the fact that it could be “choreographed” in real-life time by anyone through their mobile devices.

How does this installation work? Basically, the artists created a massive net sculpture and spread them from buildings to buildings across the sky. Visuals shaped from beams of light would then be projected onto the nets using five bright projectors. The beams of light were controlled by the audience. They could sign into the WiFi in their mobile phones or tablets, which would prompt them to a website that would allow them to choreograph the beams of light in real time (and additionally, vary the colors). Your mobile devices became sort of a “remote control” for the visuals. Also, there is spatial audio. Ambience sound that set up the atmosphere would be played through the audience’s mobile devices.

Not only is that really engaging and interesting, I think it’s very much reflective of the new media. It has a high entropy – the possibilities of the visuals created are endless, since humans’ behaviors are unpredictable. In addition, the net itself is constantly changing due to the string tension and the weather condition such as the wind, allowing the visuals to be projected to different dimensions. Different number of audience would produce different results as well – there are so many aspects that contribute to the variability.

The machines (in this sense, the light beam projectors) give immediate feedback to the inputs, which are the movements or the spots pointed by the audience through the mobile site. Numerous code were created for this, and also numerous calculations. Numbers were important to calculate the dimensions of the net and the tensions required when hanging the net, as the creators needed to make it such that people are able to see the visuals at any angle, at any time. The codes have to be created in a more modular way, such as that the activity of one projector does not affect another, and that one command does not interfere with another. The organization of orders and data are crucial.

There is a sense of “retaining memory” too in this installation as the light projected will need to remain for some time before disappearing. However, the memory itself does not affect future projections – in a sense, there is no actual feedback coming from the machine, but maybe more from the participants. There is a high human-machine interaction in this installation.

I think the purpose of this installation is to show people more about “collaboration”. More beautiful visuals can only be produced when there are multiple light beams with multiple colors; so to speak, the concept is that when people work together, the world can be richer and more beautiful. Also, in this installation, the audience becomes the artist as well. They are not merely watching something changing, but also contributing to that change.

However, I do think this installation is not “automated” as without people’s participation, there will be no visuals or audio. The net will just be a net. While it may be the message they’re trying to get across, I do think that without proper publication, people will not know what to do. The interaction part is not something that is intuitive, but rather prearranged. Another weakness is that people without mobile devices will not be able to contribute, which may adverse their idea of collaboration entirely.

The artist that I chose for my hyperessay is Aaron Koblin.

Aaron Koblin is best known for his innovative use of data visualization and work in crowdsourcing, virtual reality, and interactive film. In his TED talk (see below), he mentioned that he believes “data can actually make us more human”, as it can show us how we have been living our lives and tell our story. He is highly interested in collaborative projects, where people can come together to create something, since more people will mean more data and more data will result in a greater story produced.

I think his works are worth discussing because a lot of his works are highly interactive and immersive. Most of his works that I have explored require direct audience participation in order to be able to work (for example, the Johnny Cash Project and This Exquisite Forest), making it highly interactive. There’s also one project that I think is highly immersive, called The Wilderness Downtown, where the experience is tailored specially for each individual (it’s pretty interesting, I actually tried it out). There’s also a very high variability in his work because of the unpredictability of what the participants will do.

In addition, I like that he’s making use on the rise of technology (more specifically, the internet and social media) to create interactive media. Some of his works require contributions from the audience through websites or mobile apps, for example, and I think that encourages people to participate even more.