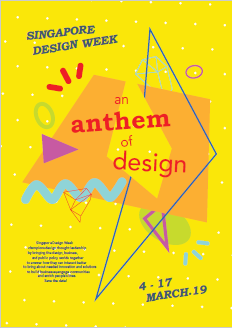 I decided to go with the slogan “An Anthem of Design”. Following my research and development post, I mentioned that the draft I made was not reflecting the spirit of anthem that I wanted, so I created a second draft. 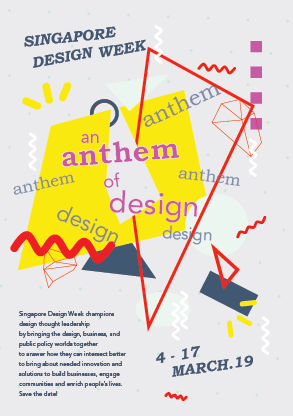 I found inspiration for this from Pinterest, especially the color scheme. (I’m bad with colors.) Here is the image that I used for inspiration: 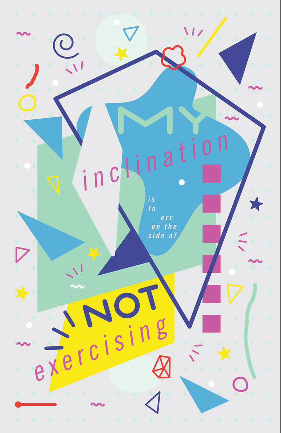 However, turns out that the pale grey background was muting the energy of the poster. I really liked the pale color since it makes the bright shapes stand out, but I do agree that everything does not seem as exciting as it potentially can be. I changed it to white afterwards. 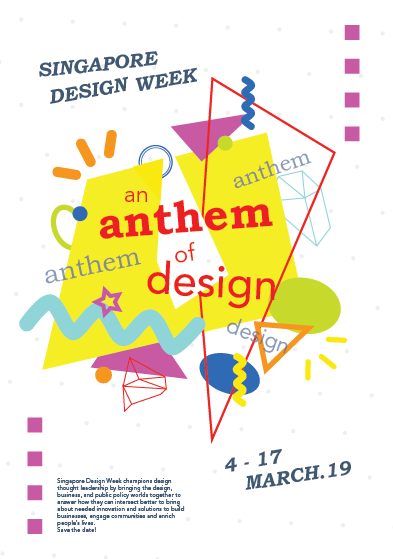 Based on the feedback, I then tried just changing the background with any color that I think are “exciting”: I used green, orange, blue, etc. But eventually I settled with the color yellow, since it looks the most playful in my opinion. Here is my final design:

At first I wanted to use red as a “guide” for people to read the parts, but apparently the dark blue catches more attention, so in the end I changed the color font to dark blue and refrain from using that color for the other shapes, except for the one shape that I want to use as a line guide. Since the slogan is kind of special, I used red for it. I also didn’t use red for any other shapes.

I also change the orientation of the shapes to create some kind of contrast. I took out all the shapes from the canvas and realized, I used so many shapes, it’s confusing even for me. So I cut down the number of shapes to make it less messy and to create more focus. I also cut down the colors that I used. After that, I just play around, putting the shapes one by one.

I took away the squares at the side too. At first I wanted to show that although it’s something fun and very free-spirited, there is still some kind of pattern or order to it. But then it does look like it’s framing the whole shape, restricting the canvas somewhat, so I took it out and enlarged the shapes instead.

It wasn’t perfect. In fact, there are still things I can improve on. I was so focused on playing with the shapes and colors that I didn’t experiment much with the font types. But I think my design definitely improved from the beginning, and I actually had fun arranging the layout. I think this project pushes me out of my comfort zone. When I went to consult and showed my first drafts, I realized that I usually play safe with my designs, choosing something with less colors and less “experimental”, especially since I think my sense of colors is not as good. It might not be the best, but I’m satisfied with what I have made.