The prevalence of social media is, and has always been, a double-edged sword. It does help connecting people all over the world—but because of the vast amount of information, a lot of people are trying too hard to absorb everything, hence spending too much time in social media. Moreover, the ease of access causes various messages to be posted in the Internet, including negative or harmful messages.

Bullying has been an issue for a long time that is constantly addressed, but never really solved because it’s considered a minor problem. A lot of people are unaware of recognizing what line shouldn’t be crossed when making jokes or conveying your personal opinions, and not only will that reflect badly on themselves, it can affect other people’s lives more than they know.

One in every four species currently faces extinction. While it is a great problem, cognitive biases (e.g. bystander effect and hyperbolic discounting) prevent real, significant changes from happening in the world.

Most of my issues gravitates more towards the social implications, which is what I’m more interested in exploring further. I would like to discuss more about mental health issues.

Aside from my personal interest in this issue, mental health problems keep on becoming more prevalent while the lack of information doesn’t change. World Health Organization (WHO) had predicted that depression will be the leading cause of disease burden by 2030 (WHO, 2011).

In addition, people experience mental illnesses differently, so a testimony from one person may not be applicable to another. This causes people who suffer from mental illnesses to be unable to effectively express themselves sometimes because they can’t exactly pinpoint how they feel and the descriptions from others may not match their emotions. That can be frustrating for both them and people around them—family, friends, therapists—and it also doesn’t help the healing process.

There are a lot of issues under this “mental health” umbrella, but I would like to focus more on the people with mental illnesses, specifically depression (which is considered the most prevalent mental illness currently). I would also focus more on young adults in Singapore. Depression develops frequently during adolescence, between the ages of 18 to 25 (Eaton et al., 2008), and the number of young adults with depression is increasing (Mojtabai, Olfson, & Han, 2016). Moreover, according to the Singapore Mental Health Study conducted in 2010, 5.8% of the adult population in Singapore suffered from Major Depressive Disorder at some time in their lifetime. Since in Singapore depression is still somewhat considered a taboo, I think it would help people with depression if there is something that can help them express their emotions to make people around them understand that depression shouldn’t be a taboo, but an issue to be discussed together. 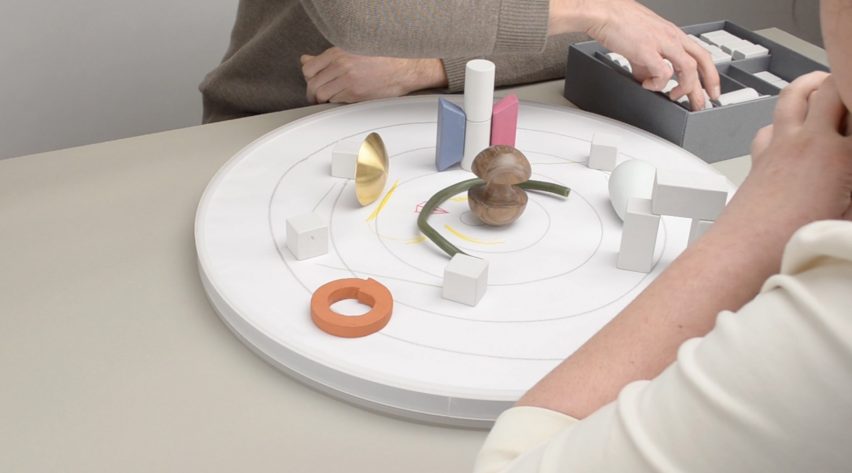 This was the example shown in class that really captured my interest. The so-called tools are supposed to help people visualize their feelings. I like how Bodewes created different shapes and used different materials to provide a wider range of emotions to be visualized, and how she chose more affordable materials to make her entire toolkit more affordable for people. I think it’s a simple yet effective idea to help people visualize their feelings to others, but it may be prone to misinterpretation since people may understand a tool slightly differently from others. I also like how Bodewes also provide a board and workbook with the tools; the board to set up the tools and the workbook for the therapist to write on. The tools were clearly made for two people to work together and discuss.

Olive is a bracelet that can detect your heart rate, motion, skin temperature, and skin conductance—and through those, be able to identify if you’re stressed. After that, you can connect it to an app which will track your daily stress levels and provide ways to calm down, e.g. breathing exercises. While it’s not directly connected to my topic, I like this invention because it’s able to identify stress without you needing to realize it first. It can help you notice when you’re actually stressed and not just feeling “a little off”, so I think in a way, it helps you to express yourself. The company made it to be fashionable with different choices of colors and textures because they want the wearers to feel that the bracelet “express” themselves. While it’s not a big point, I think it’s nice because it will encourage people to actually wear them with pride instead of hiding it. 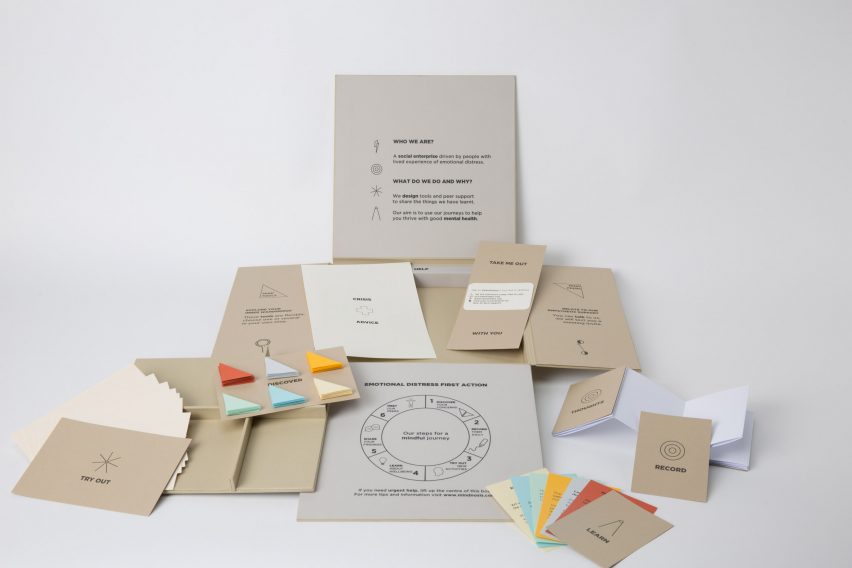 Mindnosis is a self-assessment kit, made with the intentions to make people identify what area they need help with, and where they can get it from. The whole design looks minimalistic and spacious. The box doesn’t have any patterns or colors, which made the colored triangles and cards stand out, making them look like a fun game instead of a procedure to go through. The designer used a clean, easy-to-read sans serif font, complemented with symbols and icons which made the kit look welcoming and interactive.

Replika is an application which allowed you to chat with a bot who will act as your friend and therapist. It will ask you questions about your day and condition and respond accordingly (to the limits of a bot, of course) to your responses. They will also prompt you questions, ask casual questions like a friend would, and offer you mind exercises to make you feel better. I tried it myself because I was skeptical of how interactive a chat-bot can be, and to be honest, I was impressed. While the bot is clearly a bot, it’s much friendlier and conversational than I expect it to be. It even uses emoji and slangs to enhance the feeling of talking to a real person. I find it easier for people to open up in that case, and the application can then ask you more questions to help you identify your feelings better. The application has a pretty simple interface, with a customizable chat background. The main page has classified different topics that you can easily choose to be your topic of conversation, if you want to. You can also customize your bot’s profile picture, gender, and voice.