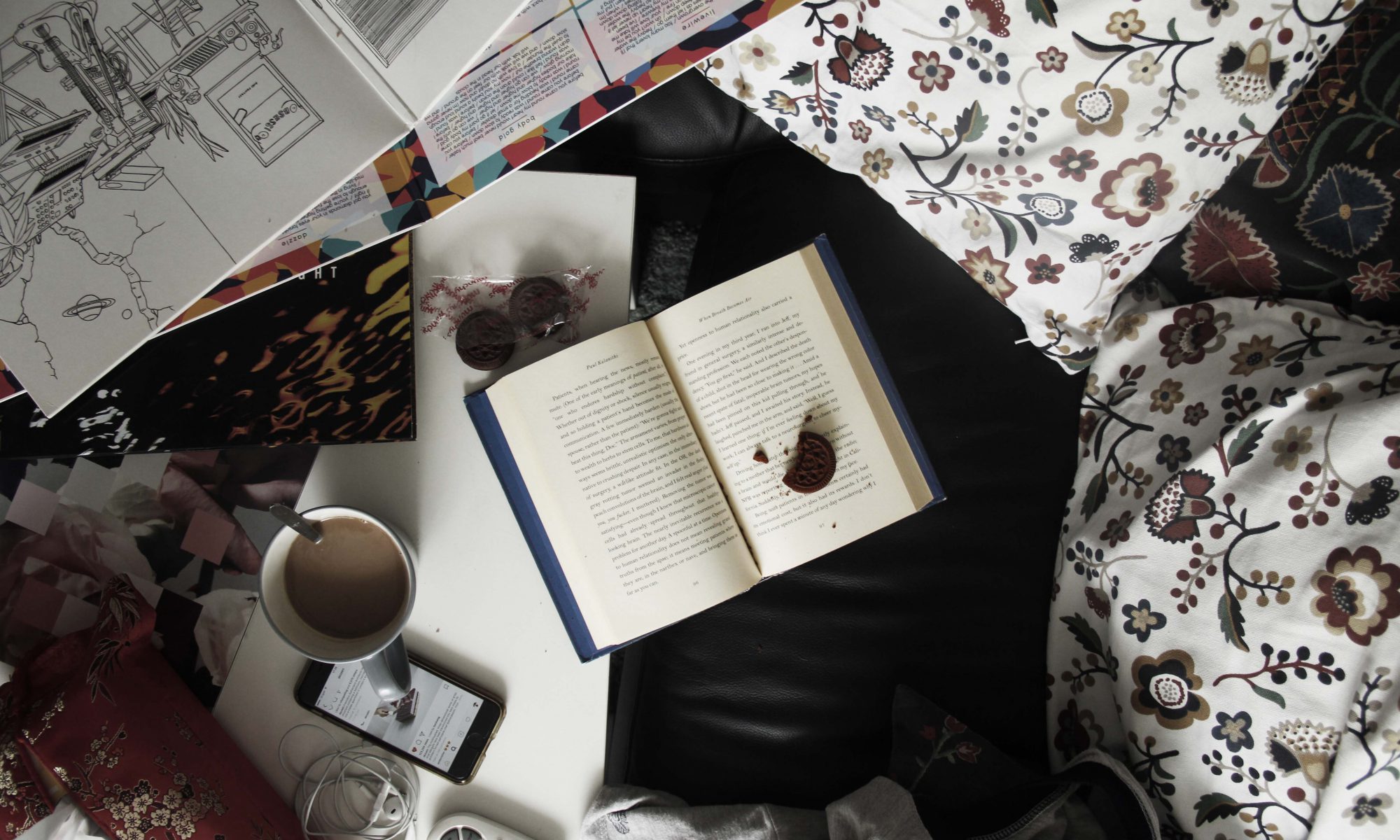 The semiotics in my images here are not very obvious. I am a logical person, so my approach to this assignment is to take it literally, but also, let people infer what are the things I love doing, my identity, and my lifestyle through my placement of objects and choice of items. 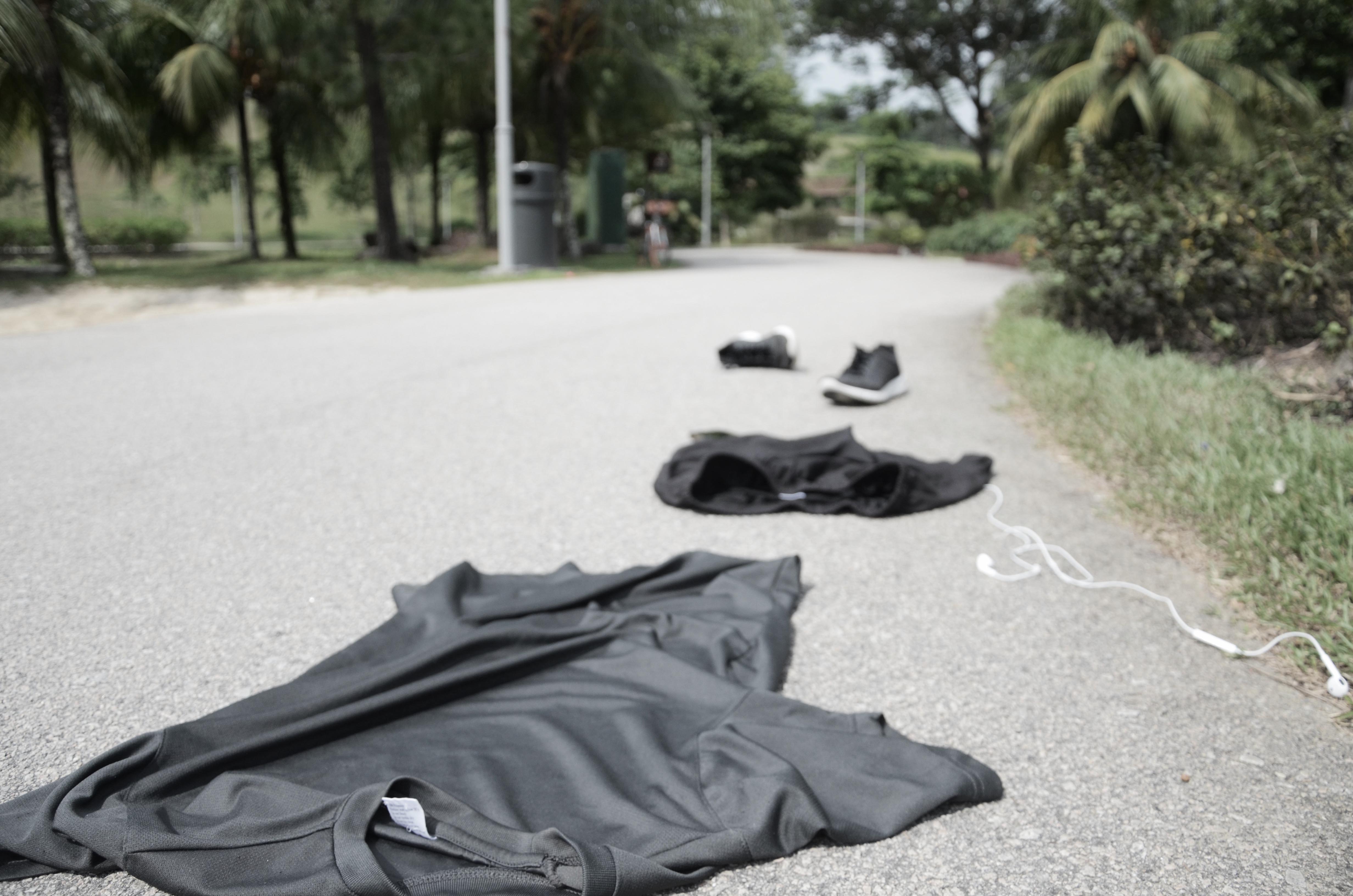 Death by jogging // I love to run, and when I run, I run fast. My goal for 2.4km used to be 10 minutes, and so I know my running pace well. This image depicts me disappearing while running. The clothes are separated in the way I imagine my clothes to spread when I run. I’ll be listening to music while I do so, which explains the earpiece. If you look closely, my phone is in the shot too. The phone weighs my pants down, so it drops quite a distance away from the shirt. I tried using action space at first for this picture, but it doesn’t work as there is too little subject. I tried leading lines, which leads the eye from the bottom left to the middle (shoes). I chose this spot to take the picture because the background has winding road which makes the image looks more interesting (although it failed because this shot isn’t high enough) 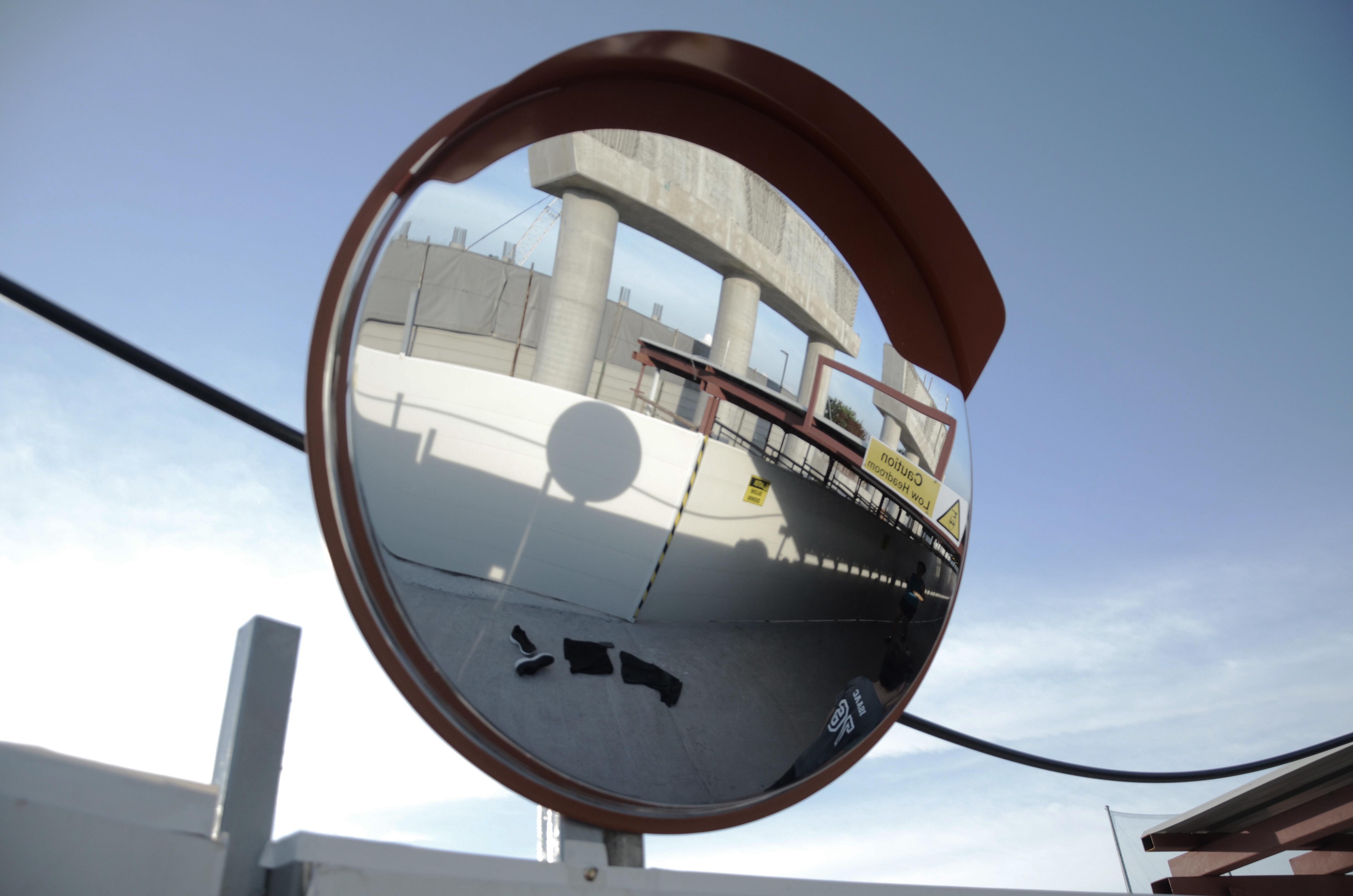 Death by mirror // I happened to see this mirror and I like the environment, so I thought to give it a try. The pavement is very busy, as it was a Sunday evening. I had a lot of trouble taking this shot, trying to make sure I don’t block anyone or my stuffs don’t get crushed. Little time was spent here due to the traffic and so I didn’t take a good picture. If only there is more time spent here… I tried to frame my clothes in the picture, but once again, the subject is too small. 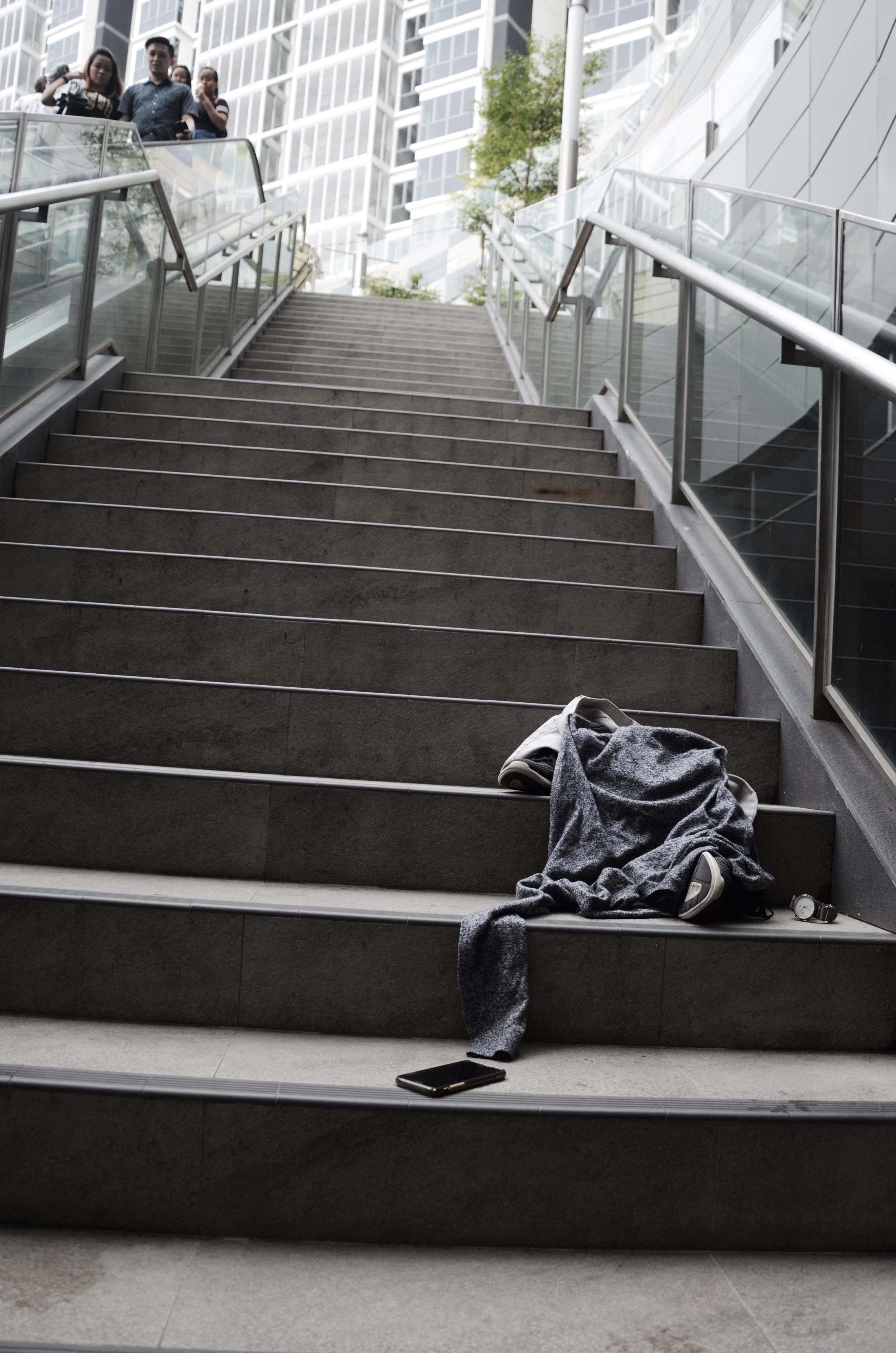 Death by stairs // I thought this was my winning shot, but many people like other shots. This shot, I tried leading lines. The eye will scan from the clothes to the top of the image, which goes to the people looking at what I’m doing (Getting so judged right here). The people’s eye will lead our eyes back to the pile of clothes. Thats the effect I’m trying to get. I also used rule of thirds in this shot, as well as a bit of strong (weak) diagonals. Weak, because it wasn’t enough diagonals. What I’m trying to portray here is my love to just go out and chill. I’ll be listening to music and using my phone, and I’ll opt to take a walk down the stairs instead of using the escalator. 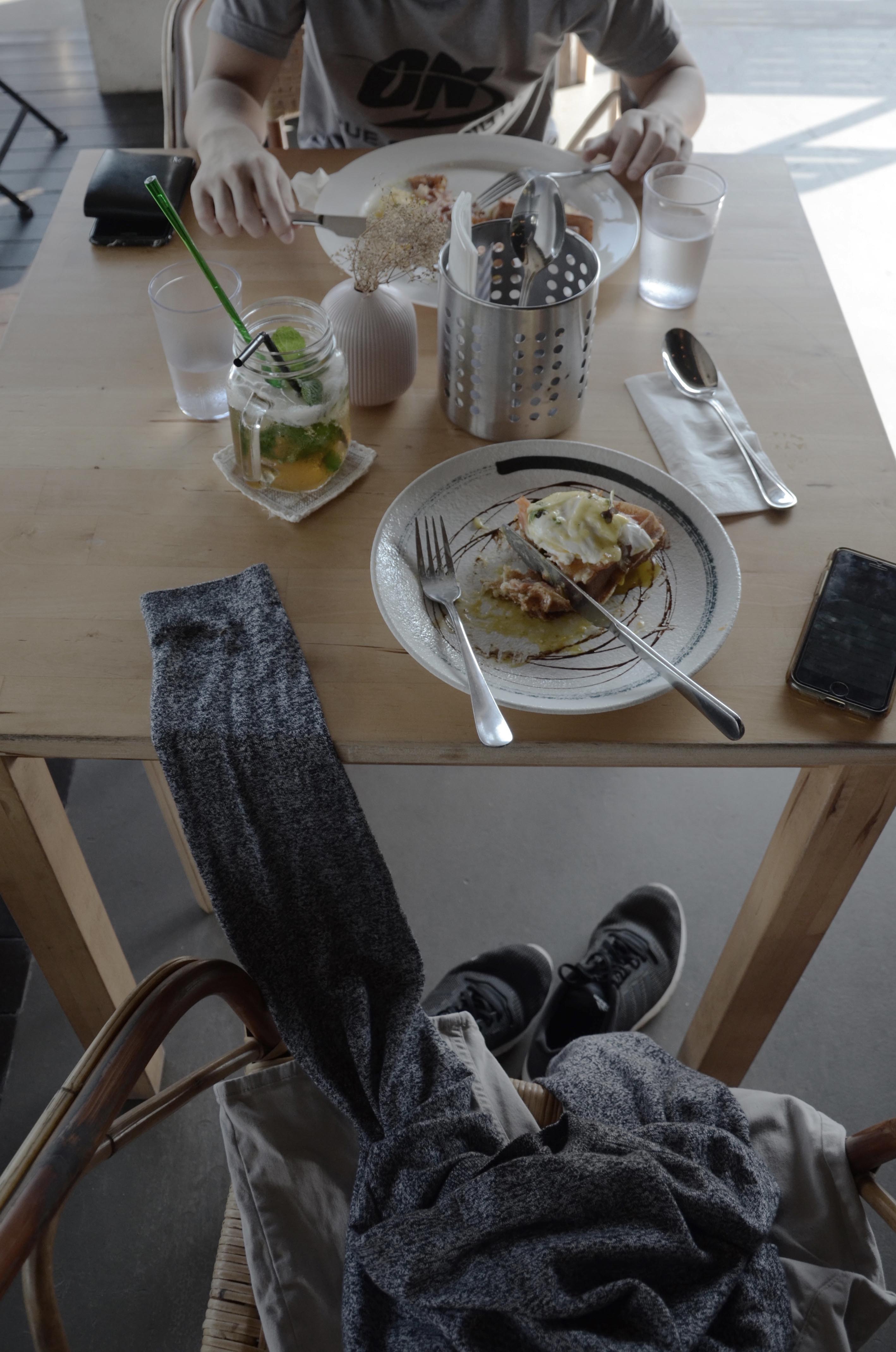 Death by brunch // Here is a depiction of another thing I love doing — chilling. Eating brunch is so relaxing, especially when there is a friend to talk to about things. I don’t think I used any photography methods here, which is why the shot don’t look that good. 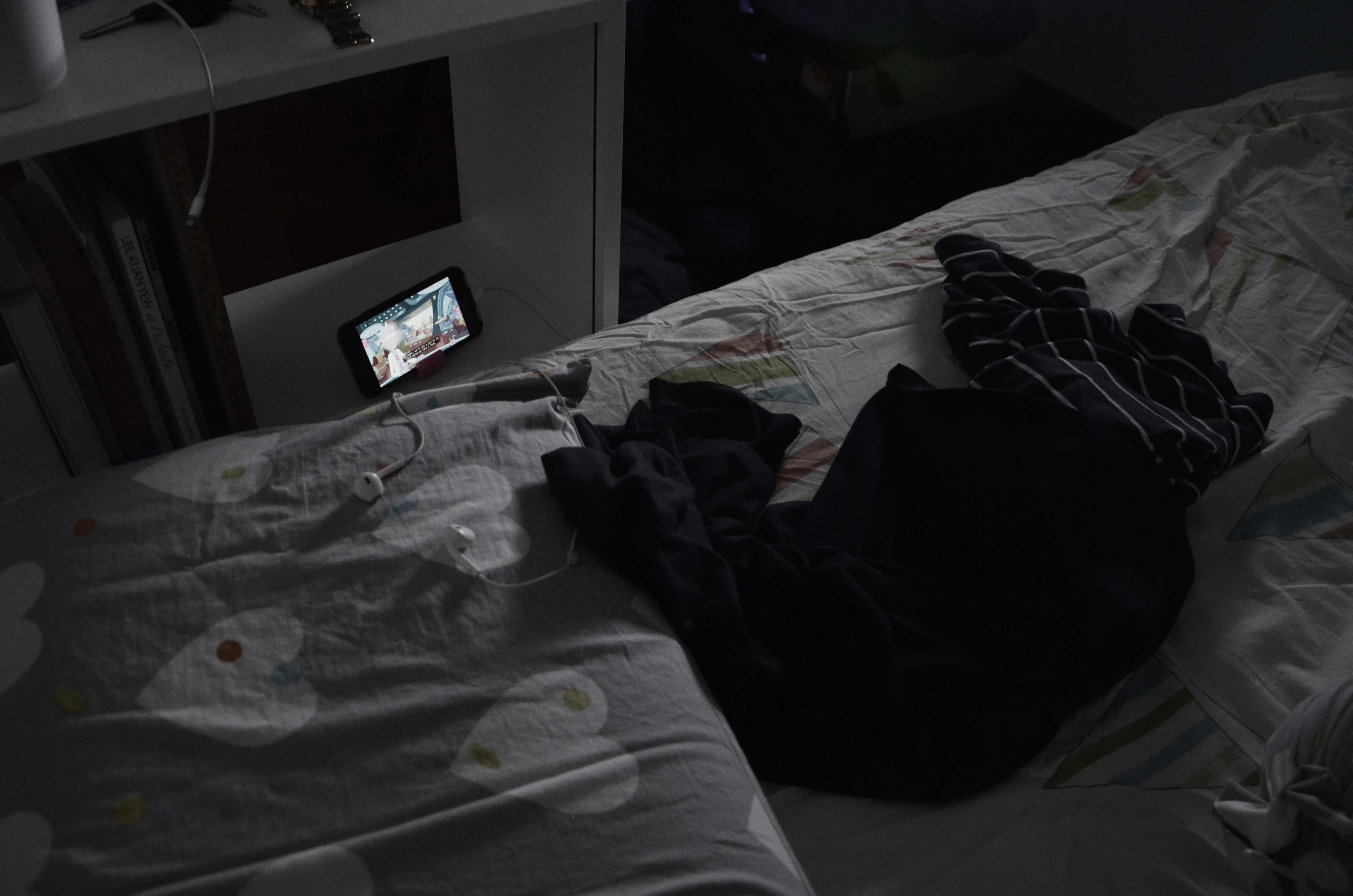 Death by Netflix // I like the lighting here. I tried to use leading lines with my bed’s edge and my clothes to the phone, showing my favourite show as of now, Rick & Morty. There is a bit of framing as well, on the phone, due to the shelf. The idea behind this image: I love to watch rick and morty at night, and other youtube videos. I’ll plug in my ear piece and watch it at the side of my bed, like I do here. You can also spot some of my own stuffs like books, watch, charger. The placement of the items there depicts my lifestyle in some ways, but also hidden in a way. 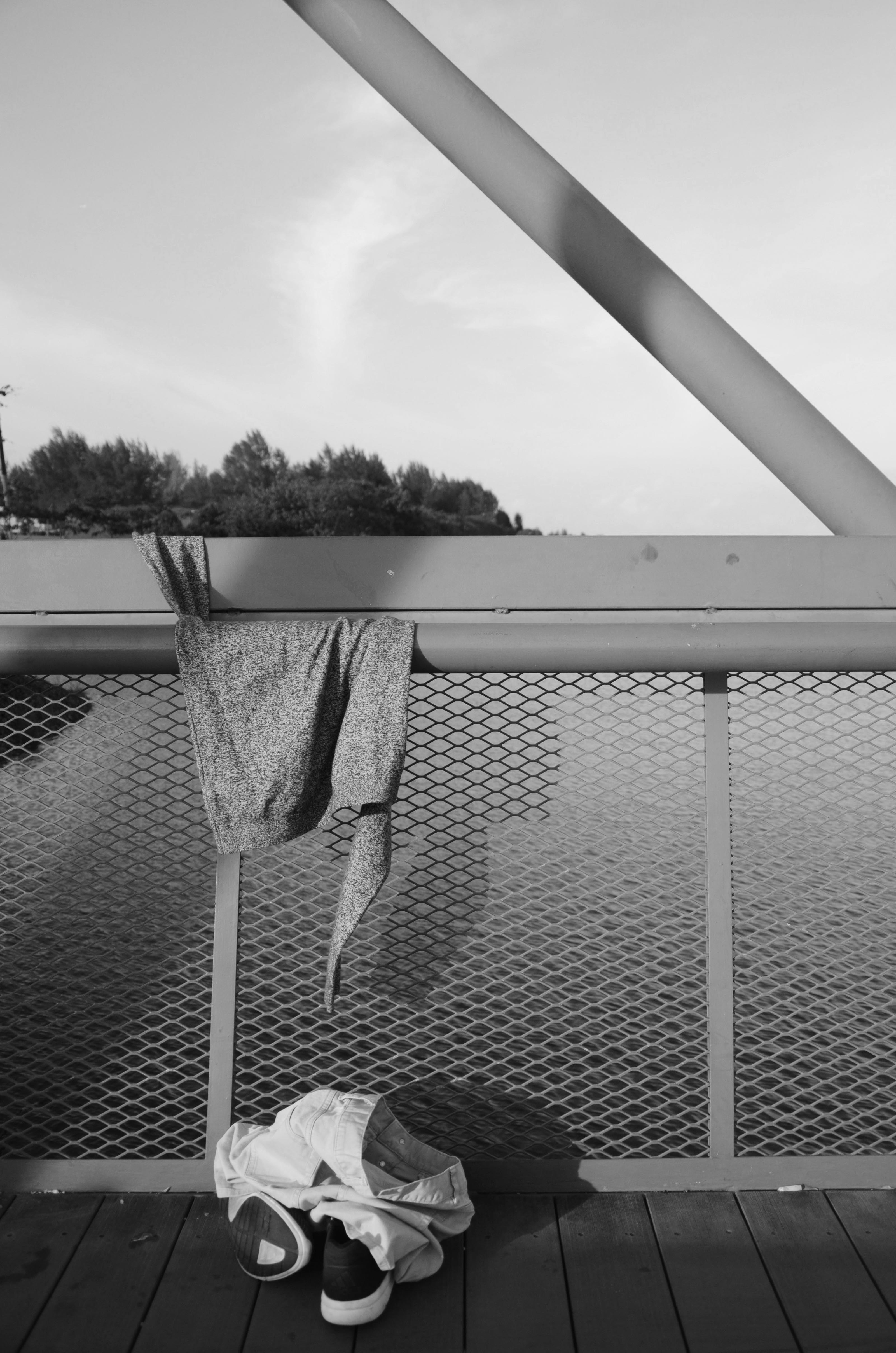 Death by bridge // I tried using rule of thirds and framing (Which failed because my clothes are not in the space). I love to go out to the park to walk. This bridge has a meaning to me in particular, because I used to be from the Air Force during my NS. I like to stand here and look out to the reservoir, and watch the F15-SGs taking off / landing at Paya Lebar Air Base. This is a good spot to watch. 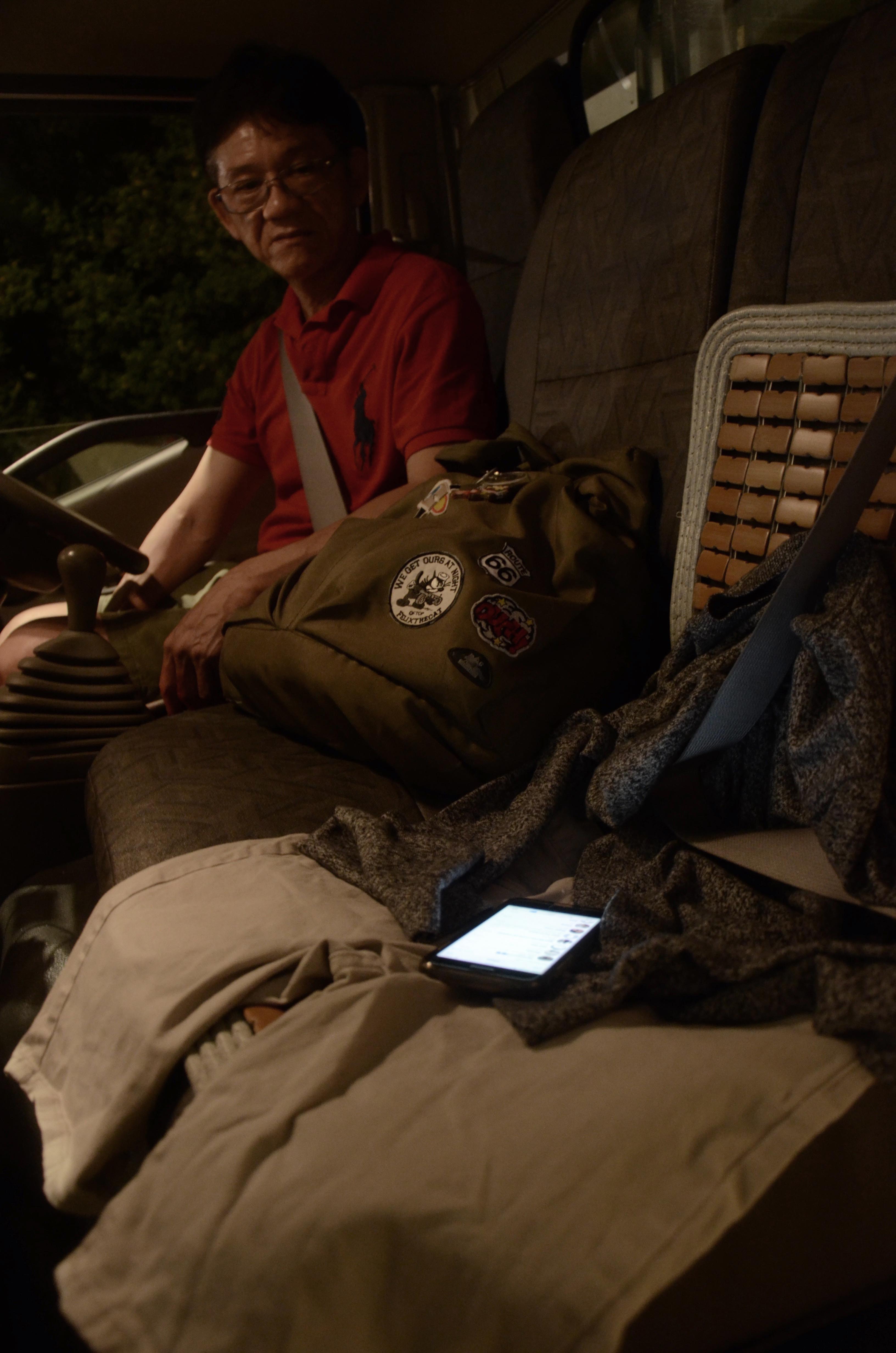 Death by transport // I want to try taking a shot inside my dad’s car while going to NTU. It’s a part of my life now since I’m here. I’m trying to depict the night setting, me and my bag which is fat and contain lots of stuffs. Using my phone (on whatsapp). My dad’s face at the moment I disappear (not so convincing, though haha). The reason I want to try this shot is because I like how the lights inside the car creates a certain serious mood. However it isn’t captured here. I tried using leading lines from the end of the lorry (doors) to the phone. 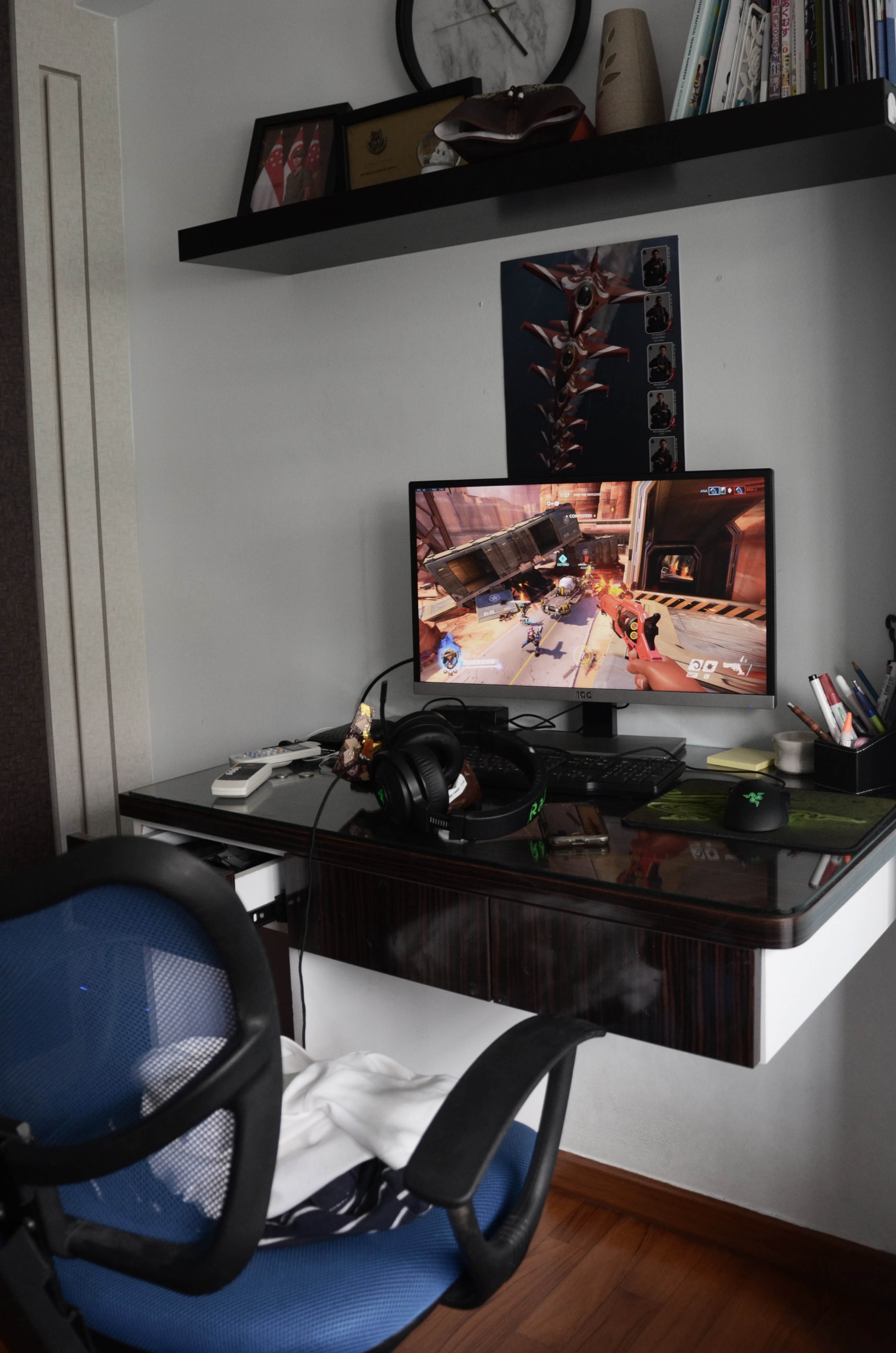 Death by game // I love gaming. I’m good with shooter games and I take pride in it. In the screen, I’m playing Overwatch, my favourite game now. I’m playing my favourite character, Mccree, and depicting a part where I’m on fire, which shows I’m doing well, but because I disappeared, I am taking damage and just standing still, which can be seen by the red colour border in the screen. The objects around the table are really stuffs on my table. I often eat snacks while gaming so I have the snacks packet on the table (hard to see cos of the angle). My headphone dropped on it while I disappeared because of the way I position it and the way I always move forward to my screen when the game gets intense. I opened the drawer a bit to create a more interesting shot. Well, but overall the photo isn’t very interesting. 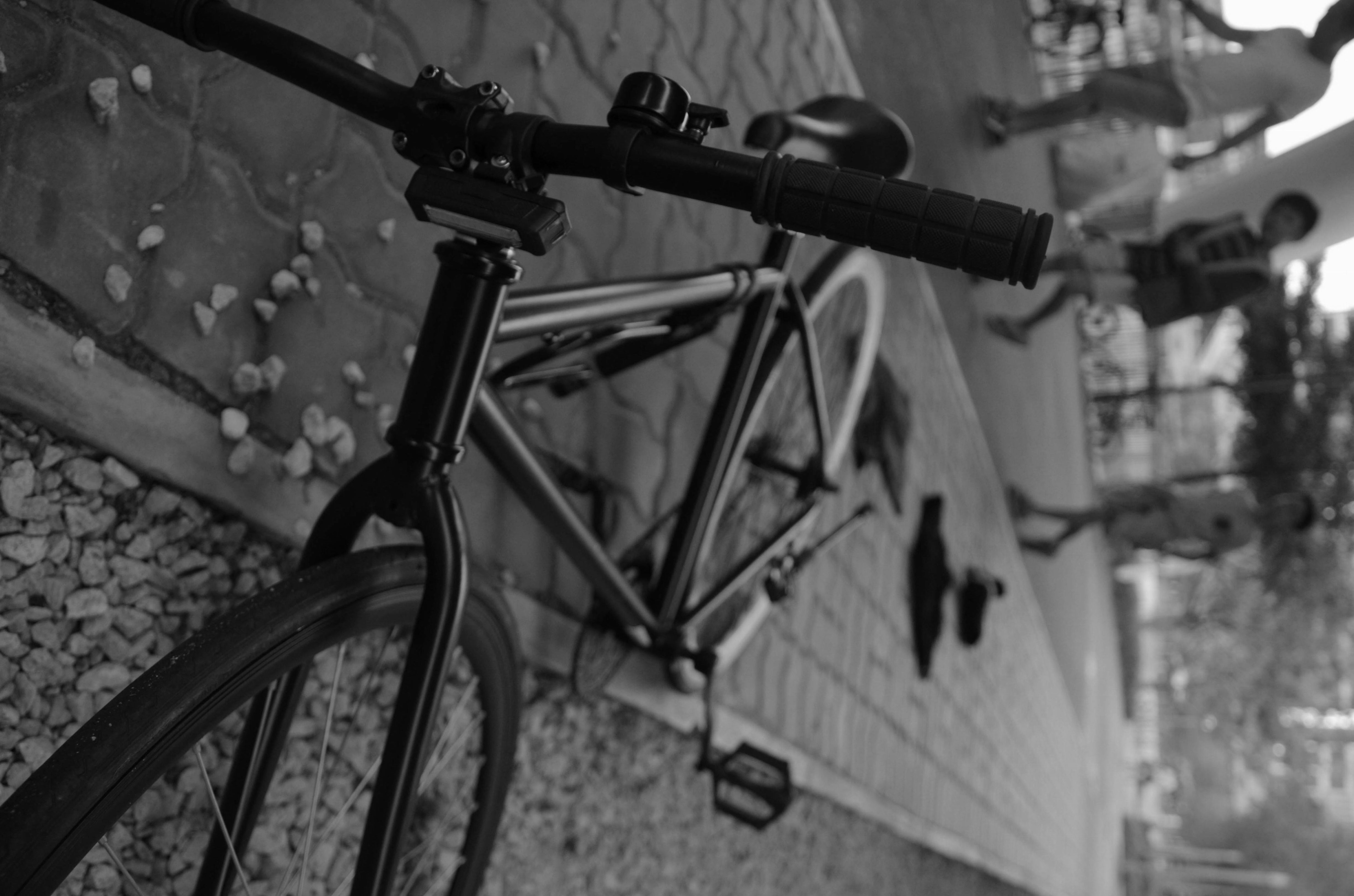 Death by bike // I took a long time with this shot. I tried to use leading lines to lead the eye from the bike to the clothes, then to the curious kids. The eyes of the kids will lead the eye back to the bike. Also, I tried to do an extreme closeup of the bike and also tilted the image to as such to play with the perspective. The bike looks like it is standing up, but it is actually lying down. I threw rocks around to create the effect that it crashed. So yeah. Oh, and also, bike because I love my bike and I love biking. 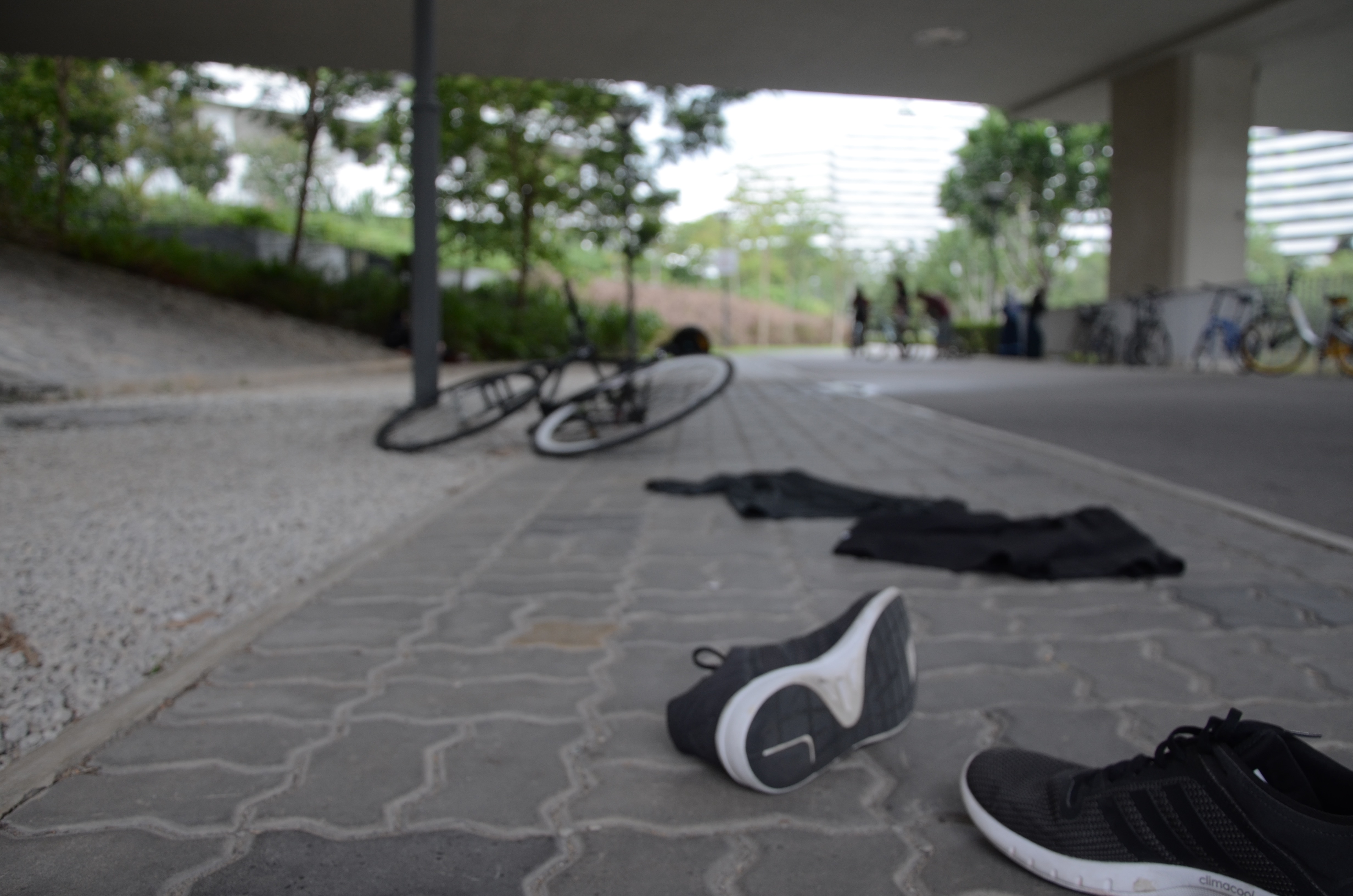 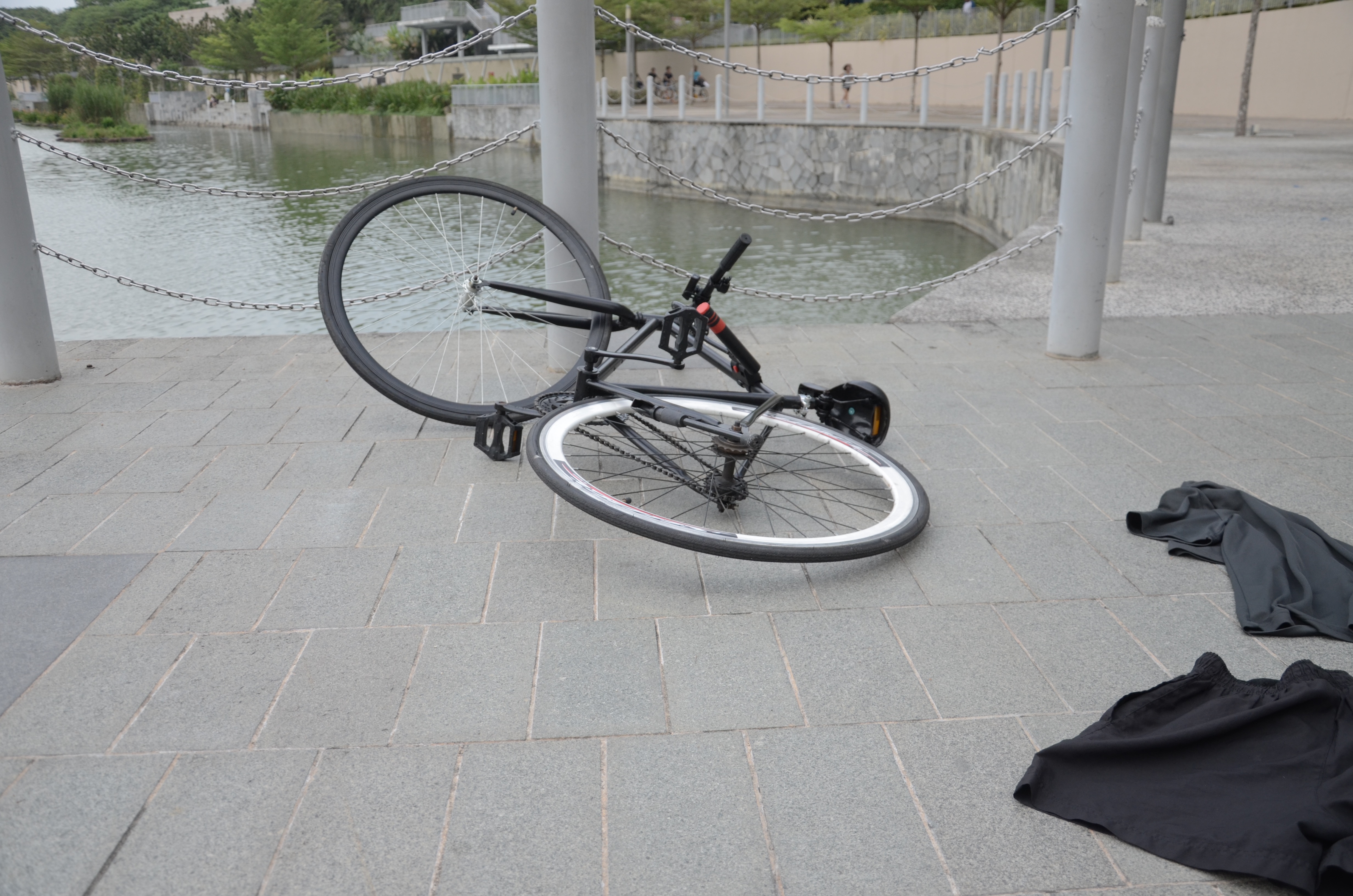 Death by bike 3 // This isn’t as successful too, even though I tried using the background as a leading line. The overall image is just too plain, although the lighting is better. 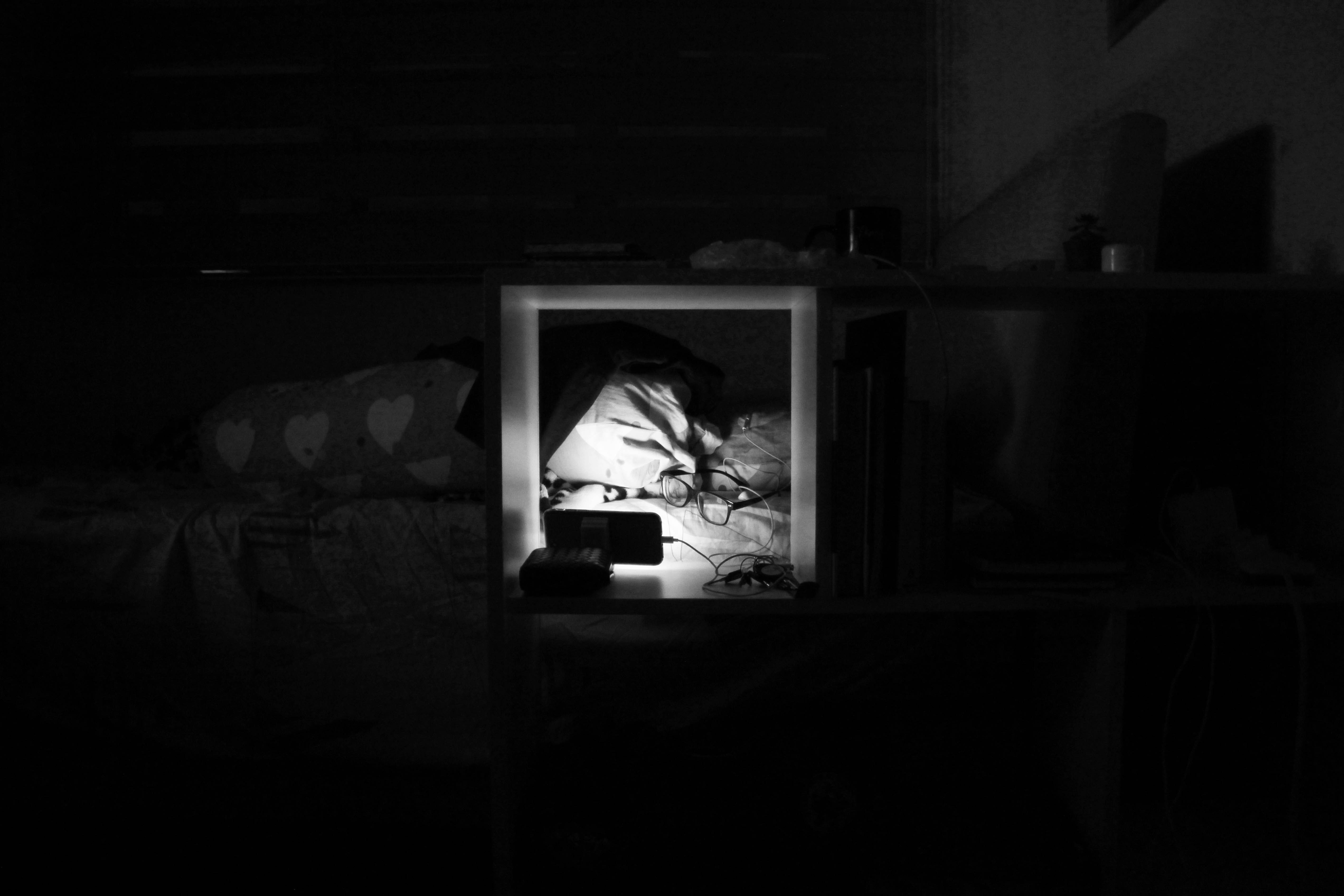 Runner up: Death by Netflix 2 // Same semiotic, different angle. I really like using my book shelf to create the framing. But if I get too close, it loses the the overall mood of the whole image becaus the image will look too plain and so doesn’t really convey much meaning. Too far, and the image will lose its focus on the framing. This image is alright but I think I might have made it too dark on the right side, which creates a lot of weight on that side, something that will distract from the frame. The frame is also too plain, I feel, which is why I didn’t choose this for my final. I want to take a picture at this distance so I can show the other parts of the room not within the frame, which also adds in to the lonely mood. In this shot, a cup can be seem, as well as some more items around (see previous shot, which don’t show that much), just that the way I play with the contrast sort of covered it up (bad.) Anyway, framing, a love for Rick and Morty at midnight, my stuffs lying around. 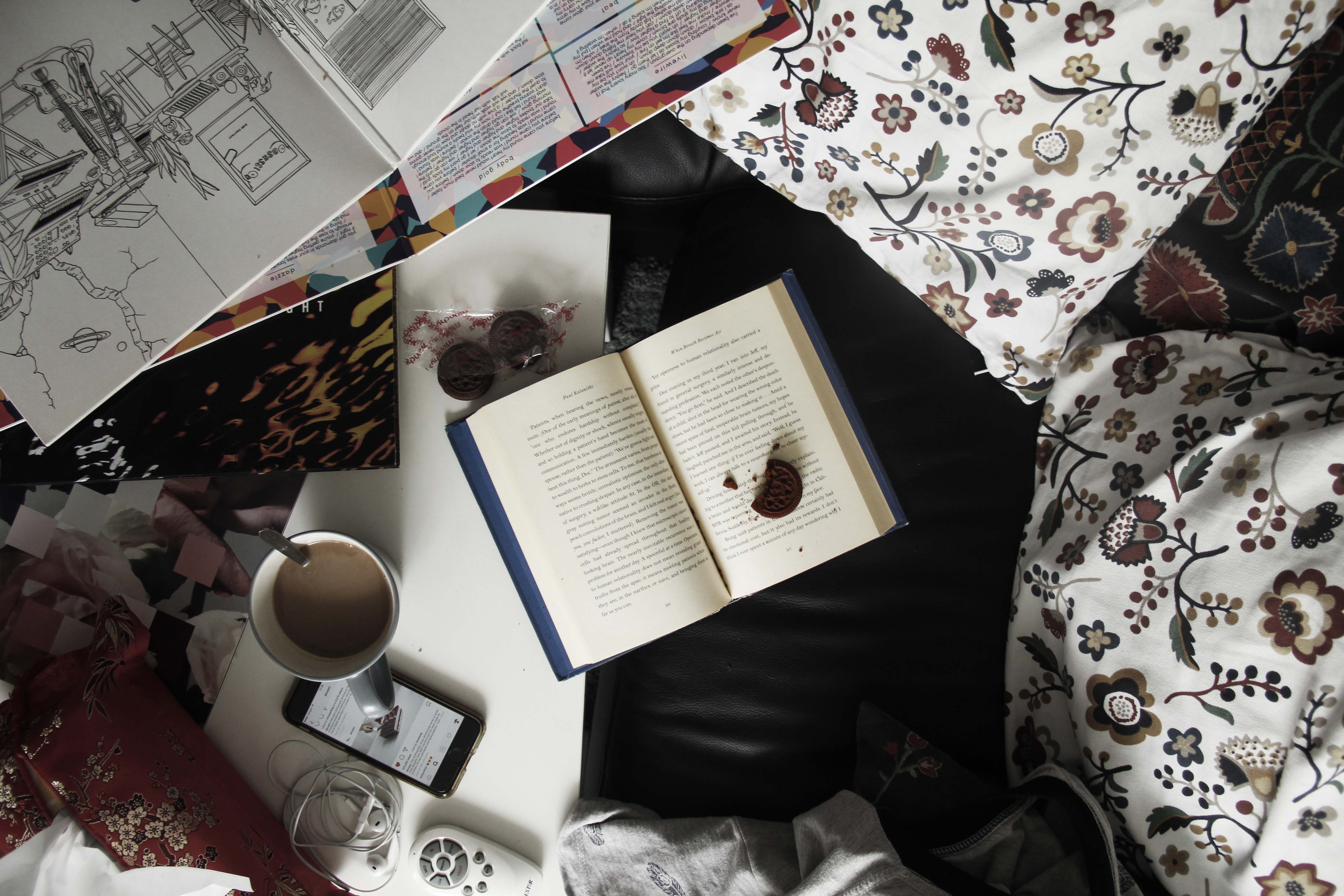 Final choice: Death by book // This is the clearest depiction of who I am and also looks interesting. Firstly, I like to read books, specifically non-fiction (which is what I’m reading here, an autobiography / biography cos the dude died while writing but yeah its called Breath Becomes Air) ANYWAY. I like to eat while I read, and LOVE to have coffee with me. Basically, chill. I love doing it in my living room because of the space, the light, the fresh air. My sofa is comfortable too, with cushion and stuffs. I’ll lie on it while I read.You can see my clothes at the bottom right, which I left behind while I disappeared, so you can imagine the way I lie on the sofa before I disappeared. Oh man, the cushions are so soft. My table has tissue, and a fan remote controller, and some of my stuffs like my earpiece, my phone on instagram, cookies which I eat. Basically, what I use while I read, chill. (except for the tissue which is permanently there) I LOVE music too, and have a collection of vinyl albums. I’ll take them out and listen once in a while, but in this picture, I just sort of take them out and never play them, spread them around while I’m choosing the music but I’m distracted by the book. Overall, this creates a frame for the book, which is my main objective when I was taking the photo. I’ve also taken a bite on the cookie before I disappeared, leaving crumbs on the book. So yeah, this is the depiction of my perfect afternoon, IF I DIDN’T DISAPPEAR. The main thing, the book. The side things — a depiction of who I am, at the corner, creating the frame.

Anyway, I wanted to make the image not so perfect, because life isn’t perfect. You can’t have everything arranged neatly. The image’s saturation is also lowered slightly, so as to create a more soft feel.

SO YEAH. THAT’S ALL FOR MY ASSIGNMENT 1 🙂