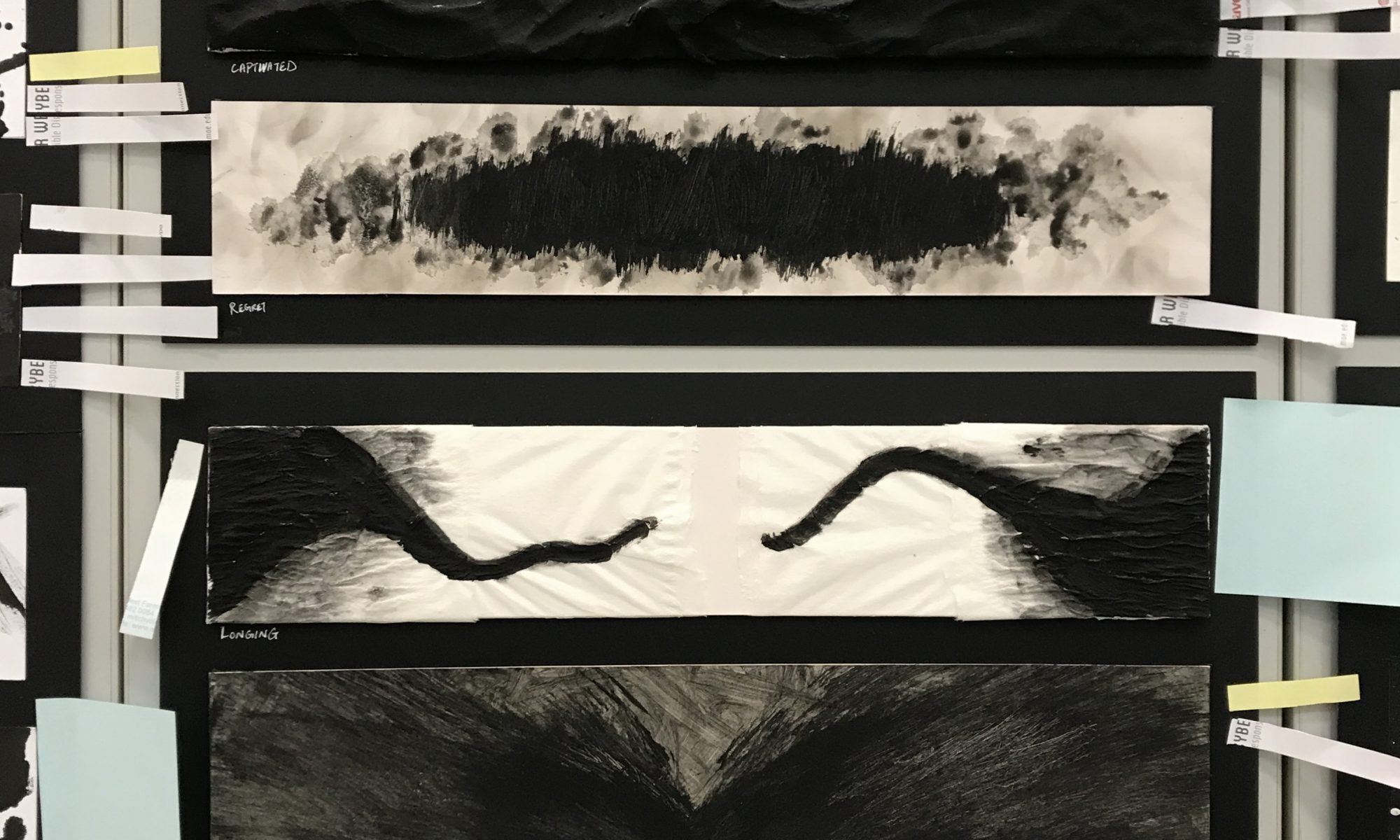 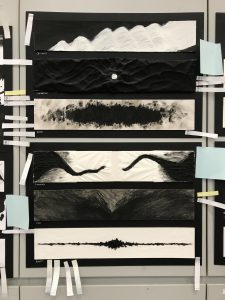 So, crit is over, and here we have what I submitted. My ‘Anxiety’ piece is the one most liked by everyone, even though I feel that my best work is ‘Longing’ and ‘Captivate’. Still, thanks everyone for the loves there :’) 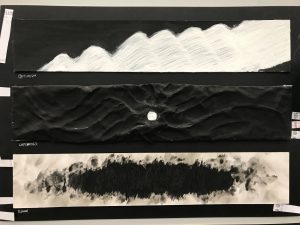 Optimism. Optimism, to me, feels like rhythmic pulses of positive energy, which is depicted in the waves as seen on the image. It is full of power, so its whiteness is intense. The stroke shows direction, moving from down up, which represents the upwards feeling from optimism. This piece is inspired by the song ‘Miracles (Someone Special)’ by Coldplay, which upon listening, had me knowing I can go on and on, to not give up.

Captivated. Captivated means to be completely drawn by something. I used fabric to depict this emotion because fabric flows, and has creases which can lead people’s eyes to the center. To me, being captivated is to be blind to anything else, which explains the pure blackness and the single white focal point. The crease allows the piece to be full black, while still create a way of drawing people’s eyes to the middle. It represents the tunnelling of the vision to the focal point without the use other marks. This piece is inspired by the song ‘Captivate’ by Midst, which has instrumentals that depict what it’s like to be captivated (muffled and spiralling sounds).

Regret. Regret is a process to me. It starts from an event which happened, which can produce a certain effect to the person. To me, that effect is something dreading, and it lingers. This is depicted through the smoky marks made by a candle flame. The next stage of regret is the thought processing. When the person thinks back on the event, and the feelings. This makes the person feel more uncomfortable, and is depicted by watered ink, dabbed in a manner to create a clearer smog. Finally, the regret hits the person hard, and the person feels a very intense and somewhat aggressive feeling, which is depicted through the jagged and solid marks. This piece is inspired by the song ‘Talking with Strangers’ by Miya Folick, which has a similar flow of emotions depicted here. In the final chorus, she sings with great pain ‘how did I miss this lesson when I was young?’ which was very intense and haunting. 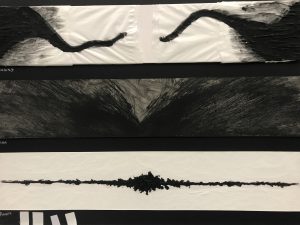 Longing. Longing is an intense, achy, yet somewhat sweet and gentle feeling.  The reason why I use tissue is that when ink dries on tissue, it create little creases or wrinkles that creates a feeling of the aches in longing. I use solid ink on the tendril looking mark as longing is an intense emotion. Yet, the emotion dances within the heart, which is depicted by the gentle curves of the stroke. The smoky parts are made of watered ink, which depicts the lingering feeling of longing someone you miss. The tendrils are made in a way that it depicts a longing for joining together, but it is broken by the boundaries of the torn tissue. This piece is inspired by the song ‘Touch’ by Shura, which had always made me feel bittersweet when I listen to it.

Fury. Fury is a very intense emotion, an intense emotion of hate. But for a person to hate someone, there has to be a back story. In the background, I used watered ink to create a cloudy mark, which symbolises the turmoil that a person have to bear before getting angry. Then, fury strikes down hard. Intense and sharp lines are made, focusing into the middle as if clashing down upon something. This piece is inspired by ‘Free’ by Broods, which isn’t about fury, but it creates a fiery feeling, and it feels like she is ready to strike down on someone.

Anxiety. Anxiety, to me, is an invisible thing on the big picture. It seems small and calm, which is depicted by the horizontal stroke in the middle. Then, the anxiety builds up, and reaches the point where the person breaks down, depicted by the disturbance in the middle. But upon closer inspection, one can detect the jaggedness of the strokes, which depicts the jittery feeling of anxiety, quite often missed by observers. The strokes are also covered in coarse salt crystals, which depicts the inner jabbing feeling in a person with anxiety. The white clouds can be seen when looking at the piece closer, which is something invisible seen from far. This is to enhance the idea of anxiety being invisible, but within, it is lingering around. This piece doesn’t have a song, sadly 🙁

I have mentioned about material exploration in class today during my presentation. To me, material exploration is the most fun part of this activity because I really like playing with those stuffs and seeing what each creates. Unfortunately, I had wasted a lot of time on doing that and planning my experiments, that I did not spend enough time developing on what emotions I should work on. Partially also because I feel that doing the emotions first will seem like ‘working backwards’ to me, which I would avoid doing. I thought I could feel the emotions through the materials I use, but it didn’t happen.

I also have spent a lot of time on one piece, Captivated, which all failed and I reused the original work. I had to move on because I really was spending too much time on that. What I learnt here is to be ready to work on the same thing multiple times, and work earlier.

That’s all. It’s been a tiring but fruitful project 1. Looking forward to project 2!