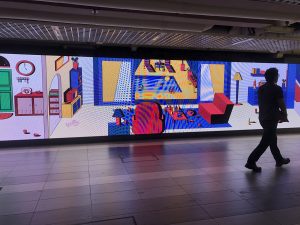 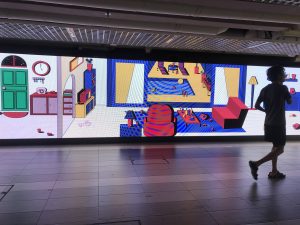 We found that low vibrance / slight desaturation works well, but not too much. The colours (now when I think about it) works good, just that there needs to be some kind of texture to even out the solidness of the colour.

The final look of the backdrops looks something like this: (note these are screenshots so its low res)

There are some additional textures which are not updated on these images but it’s okay, will show them next time.

Using tutorials, we learnt how to loop the animations which will complete everything. So for now, everything is going well and we just need to mass produce the animations and test it. Good thing is that we can still tweak the colours after we are done animating so if there’s any problems we can always fix it!

Animation test: (with van’s character animation + some of my bg animations)

So for now, we’ll continue animating.