Noise Metaverse was a pretty good experience for me and it was really interesting to see interactive artists tackling different types of project that is both cool and well presented in terms of the aesthetics and its subject matter. The artworks have mostly succeeded in allowing their audience to immerse in the artwork, even if it is just for a moment.

What defines immersiveness? My take would be on how it allows the participant to be consciously and subconsciously engaged with the work. An immersive work should be intuitive, where one do not need to overthink the process. It has to be direct, what we see should be what we get, so it is more familiar to our own physical reality. I would say there is also emotional immersion where we spend energy to invest our deeper feelings into an artwork. In this post I will talk about a physically immersive work and an emotionally immersive work. 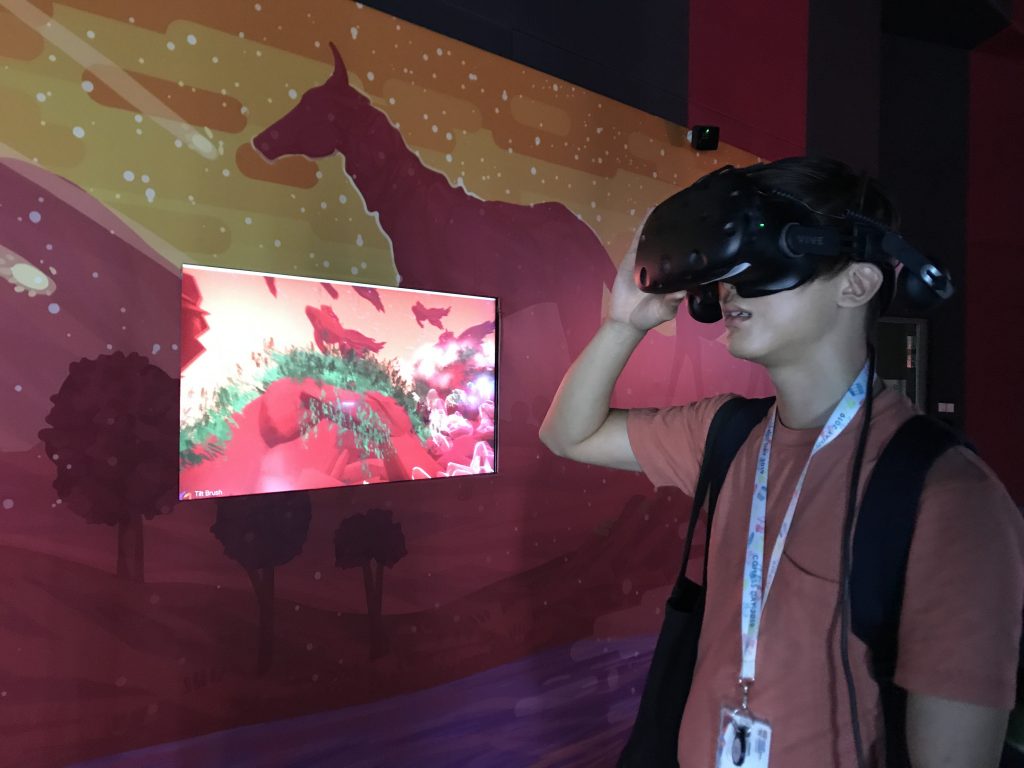 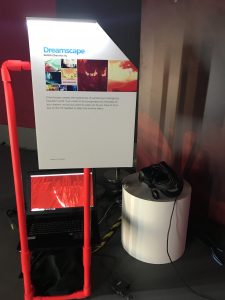 Dreamscape is a virtual reality world that allows the audience to look around, walk around to explore, and listen to the ambience. This is really immersive as it engaged in a person’s two main senses — sight and hearing. By isolating these 2 senses in the virtual reality world, one is able to feel like one is within the world, immersed and ‘plugged in’ to this new world. The visual cues also pulls the participant in, by animating some parts of the world while making it mostly static, one is able to perceive the tiny movements, which heightened our awareness. When I was wearing the VR headset and looking around, I kept asking “is that thing gonna move?” I feel that the longer we use the VR headset, the more we are able to feel connected to the virtual space, allowing us to further immerse ourselves. Honestly, I would stay in this virtual world for as long as I would to explore the different corners of the world. Unfortunately, there is a time constraint as I had to move on, and the wires also restricted me in exploring the world.

After learning that the artist had hand painted the entire world using the VR painting tool, I was deeply impressed by the artist’s perseverance and skill in painting something of such large scale to such detail.

To me, virtual reality is potentially the most immersive medium one can explore (currently, who knows what will happen in the future?). It is not just the amount of 3D space one can explore in a virtual world, but also how one can interact with the environment using certain controllers.

2. Time Space (If Things Could Change) by Akai Chew 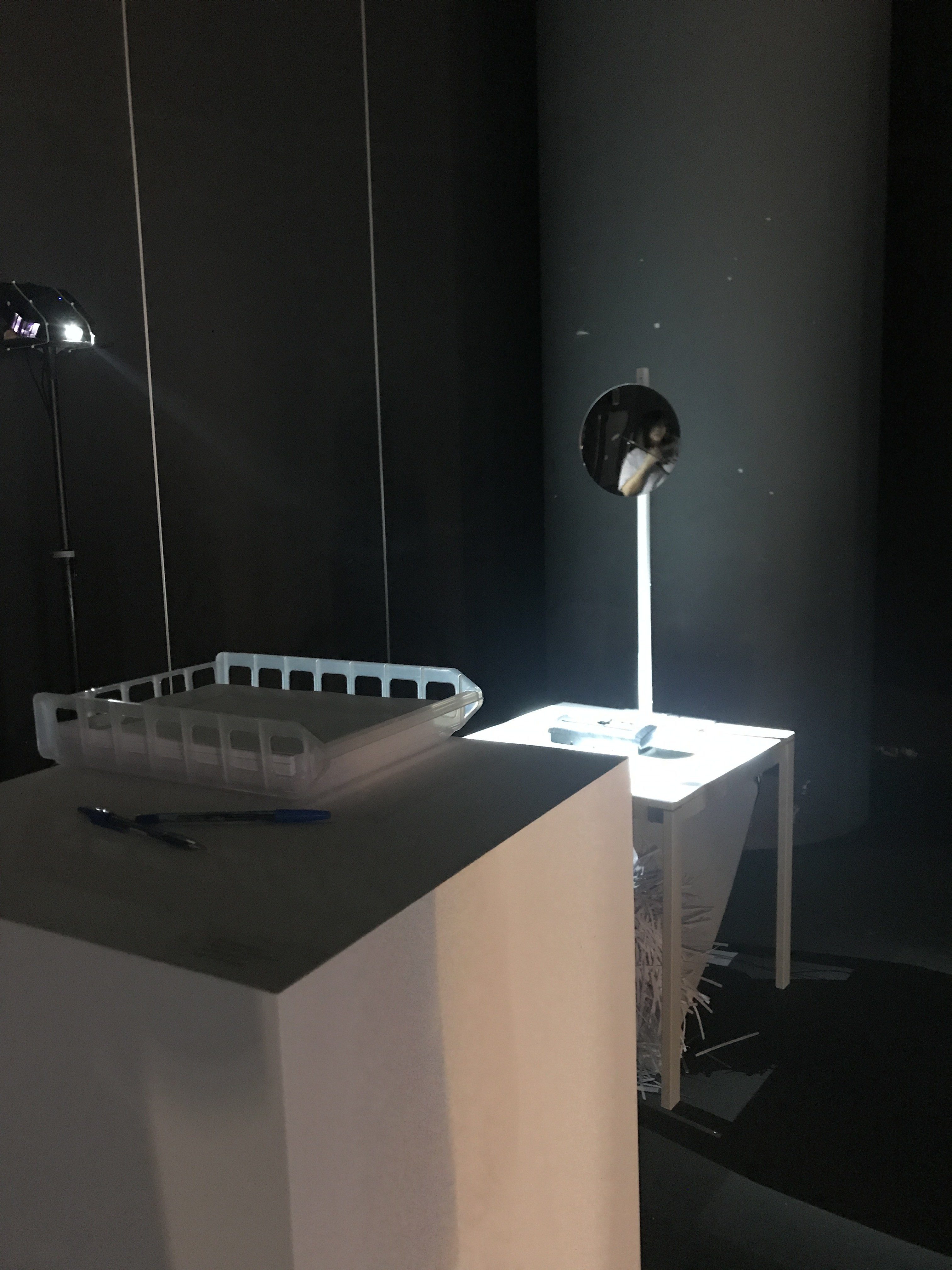 A clock with a mirror as its base, connected to a shredder, illuminated by a single spotlight. This installation draw viewers attention despite standing motionless amongst all the visual stimuli all around the exhibition. The visitors are encouraged to pick up the paper, write something they wish to forget, and shred it with the shredder. The outcome: The clock winds back as the paper gets shredded, which symbolises not just the removal of the unwanted memory, but also the unwinding of time. This means the complete removal of the event, metaphorically and emotionally, which can relieve some participant’s pain despite the fact that the event is simply not erased at all.

The shredded paper becomes part of the artwork, lying as a cluster on the floor, filled with other unwanted memories. I would imagine that the shredded paper will be thrown out eventually, symbolising the cleansing of the events, but at the same time also rendering the shredded unwanted memories intangible. Does this means that the cleansing of the memory is only temporary? Despite this, I think that the clock, to me, symbolises the collective time rewound by all the visitors, which meant that the rewind on the clock is permanent. The relationship between the intangible (rewind of clock) and the tangible (shredded paper) is what’s unsettling for me. 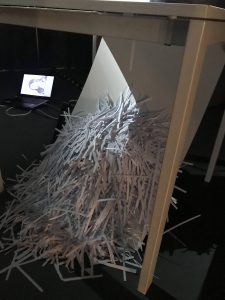 In terms of immersion, I find myself not visually or physically immersed but rather, emotionally. The idea of putting in a memory I want to forget draws be back into an unhappy time. The thought process of putting the memory down on paper made me think and rethink over and over again the series of events and the decision on whether to ‘shred’ it or not. By putting the event or name down, I put in a lot of my past and invest myself into the artwork, which turns out rewarding looking at the paper shred and the clock rewind. At that moment, I understood the artwork, and I felt relieved for that moment, for after that moment I know that, even for only a few hours, I would have that memory gone, for I have put in the effort to removed it from my brain.