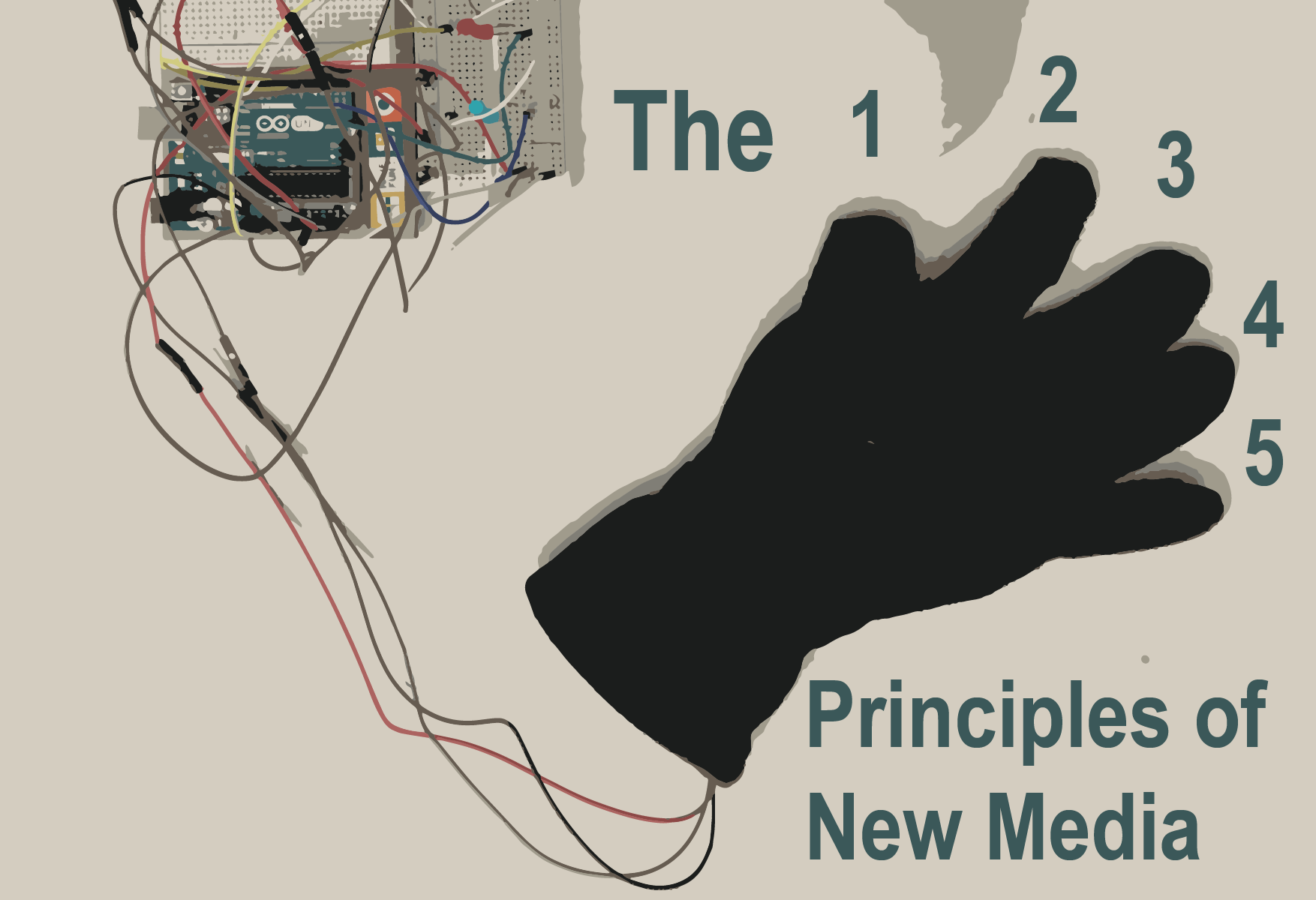 In Lev Manovich’s ‘The Language of New Media’, Manovich identified 5 different principles of new media. They are:

According to Manovich, works that uses new media would follow these principles. Would our artwork, Inter-macy (WIP name), be considered a new media work?

Inter-macy converts analog, continuous data like heart rates and light intensity into digital / discrete data, digitising a supposed spectrum of inputs into a sample and quantified into a value from 0 to 1024. The computer is able to run these discrete data in the digital code in the Arduino software, which uses algorithms and mathematical functions to run. Through this analog-to-digital conversion and programmability of Arduino, the work is considered to have numerical representation.

Inter-macy contains parts that are Modular, in terms of the different circuit paths that connects to different components that collects discrete data, which can always be removed or added. This is also true for the code that is used to run the components, where sections or lines of codes can be edited. Individual components, wirings, resistors, and objects like gloves or the LED strip can be replaced whenever needed, and it does not have to be a 1 for 1 replacement, meaning that a flex sensor can be replaced directly with a photocell sensor. At a larger scale, all the components lead to an output that gives feedback to the participant as they interact with the artwork and with other participants. The participants are also considered to be part of the modularity of the work. All these modular pieces work individually, but on a macro scale, works like a fractal structure that performs a bigger function as a whole.

Inter-macy also use many low-level Automation, mostly in terms of how the code runs in a loop with different settings when different input is present. The LED light is coded to glow on its own when the artwork is idle, and then does a variety of things when there is an input. The detection of pulse and light is also automatic through the component itself, as they are created to do so. Through the code, the inputs and outputs run on its own, and that is where human interaction is enhanced as the automation makes it easy for the participants to focus on the interaction. Another form of automation in the work is media access, which is in the code itself as they are taken from examples in Arduino thanks to the internet.

Inter-macy has Variability as the modular parts can be recreated and changed into an infinite number of possibilities through adding or subtracting of components to scale it up or down, modifying the code to do different functions from a tiny colour change to making the entire LED light up differently. Even, through the different kinds of interaction that different people will have with the artwork or the different locations, spaces, and uses for the artwork, in which its interfaces will vary even from the same sets of data.

video: As can be seen here, there are a few variabilities here with the components. This is still a prototype, so there are still many possibilities.

Variability also reminded me of John Cage’s Variation series where he sets up a stage made of motion sensors that a dancer can move around in, creating music composed by the dancer’s body as the dancer move about.

I can also draw many similarities from this example, particularly how modular it is and how variable it can be, in the way that the parts can be disassembled, reassembled, and moved from place to place.

Finally, Inter-macy has some elements of Transcoding, as the Arduino code file is written in computer language and its information is organised in its own ways, represented in the what ‘human culture’ could understand through the code itself which we can read and write, and through tangible outputs on the LED. The code can possibly be transferred into another format, like if it were to be on another program and component like Python and Raspberry Pi, although I don’t know how to do so. This principle works because in the computer culture, these codes have similar usage and can be understood in the different programs.

Thus, with all these principles applied to our artwork, Inter-macy can be considered as a new media work.

Edit: after presenting, I realised how I misunderstood variability, as I had interpreted it as that there is always potential for variability versus what variability actually means which is variability that is achievable within the work itself. As such, I would say, there is still variability in my project as there are different heart rates and different kinds of interactions between the two participants, creating different outputs.

I was quite enlightened when I was told that the book was written 20+ years ago. Back then, these principles were probably something so new to many people, yet now we take them for granted. Although the reading feels outdated, there’s still some kind of respect I could have given to the book while reading it and not just dismiss it as ‘common sense’.