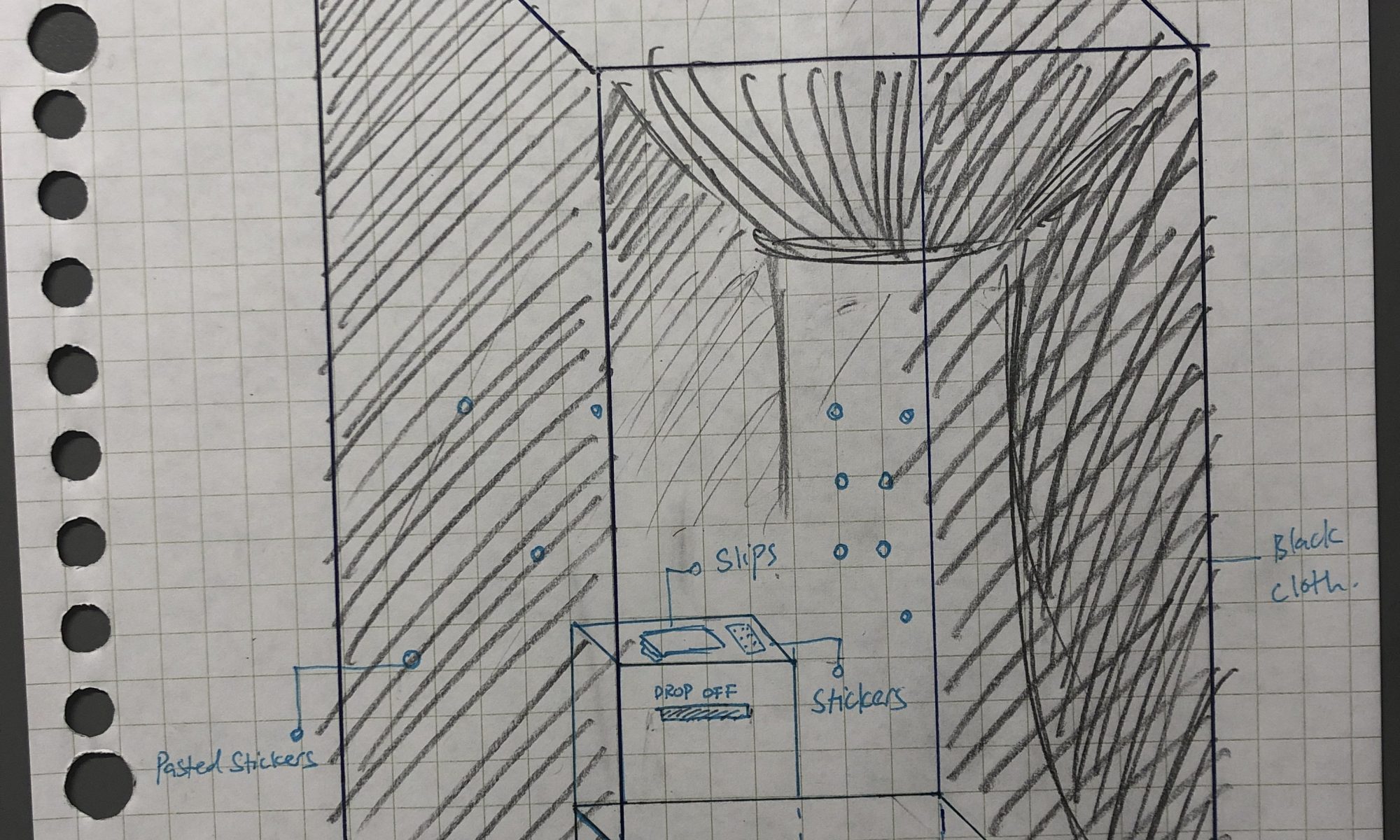 I want to focus on my previous project ‘What We Left Behind’ and build upon it. I was more interested in the idea of the birds dying or getting lost in ADM, and I thought there is a lot of potential in requesting for the school and the students to take a stand in helping the wildlife we unintentionally kill everyday.

I think the project background requires some more research and interviews, so maybe I will not focus too much on that as I don’t think there’s time. As such I will focus more on the interaction.

I was also inspired by Siah Armajani’s Sacco and Vanzetti Reading Room #3 in the way that it is a space that is functional to the public, yet makes a statement. To also conclude from what we have learnt from the past few weeks, I wanted to create a space that intervenes through confrontation with meaningful objects, and also to create an environment that can change through movement. 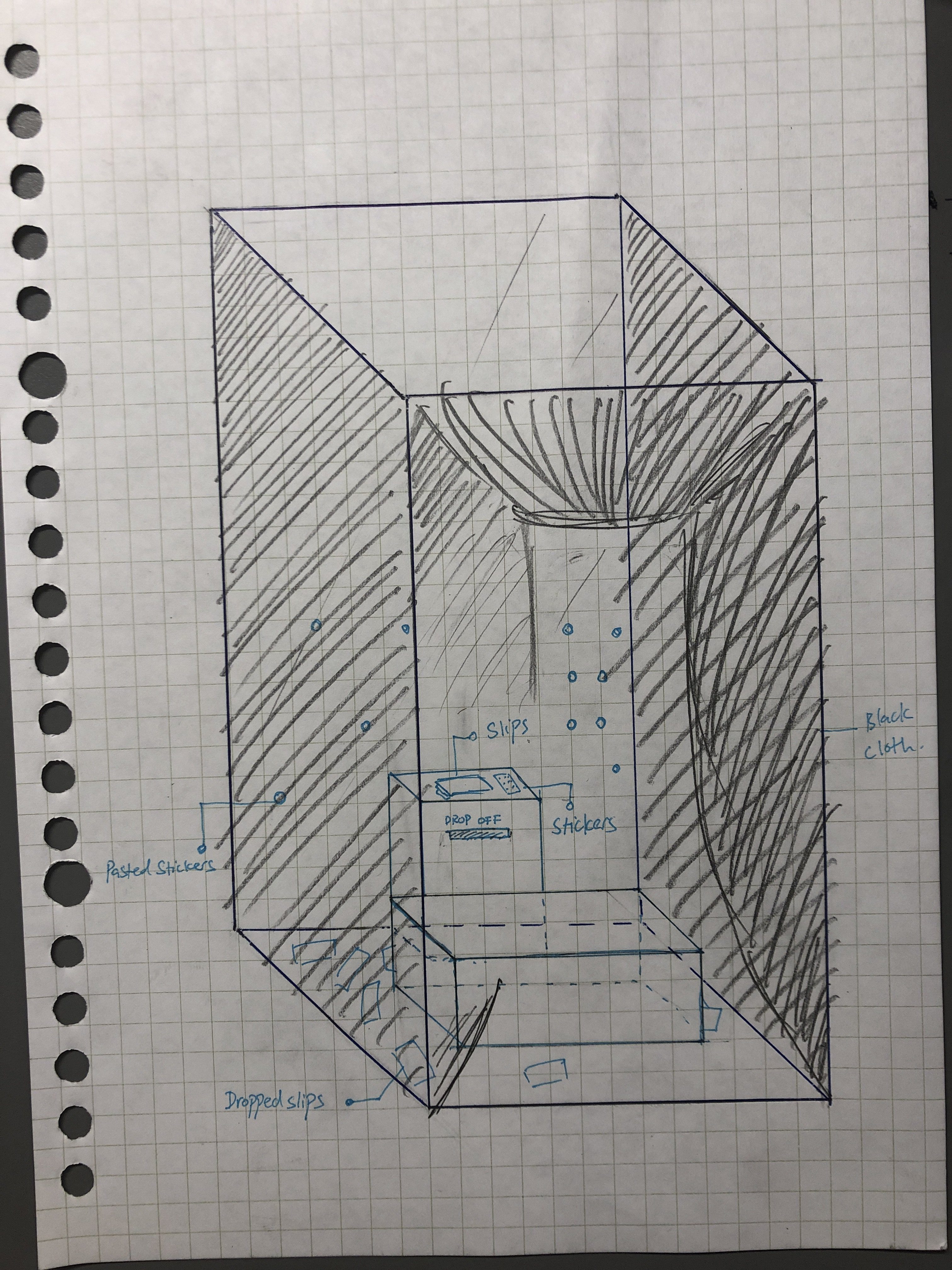 The idea is to have a booth facing the window at level 1 lobby area. This provides a view of the Sunken Plaza, which is where many birds enter and get lost in. The space will take up 1 window pane, and it will be covered by framed black cloth so that I can use as little materials as possible so as to save cost and not be overly wasteful.

There will be a bench or few chairs placed inside for visitors to sit on. It will face the window so as to allow them to have a view of the outside while seated. There will also be a platform that works like a table, placed directly in front of the window. There will be a stack of paper and some stickers on top of it.

The paper will be forms for people to write on. The visitors will be prompted to observe birds through the window. If they spot any birds, they will be encouraged to pick a sticker from the sticker pack and paste it on the window. Afterwhich, they shall write on the form with the following information:

The visitors will interact with the room passively through using it as a common space. The space is designed to provide a good view of the Sunken Plaza, possibly for one to sit and think, or rest.

Another interaction comes in the form of bird-watching, where they find and face entities that do not belong to the space itself. Once they do so, they start to engage in the interaction by putting a sticker and writing a form, before dropping the form off.

Visitors also can engage by picking up the dropped forms to read and find out the kind of birds that visited the Sunken Plaza, and try to find if the birds are still around.

From the outside, people can see the booth, especially when it is darker on the outside. However, as the stickers are not placed from the outside, it will not be very visible and the window pane will still be mostly reflective. Thus there is a flaw in this design. However, I will argue that the space is not meant to provide for a functional solution but as a way to track the number of birds that flies into ADM and also as an inspiration for solutions. Stickers can be implemented outside of ADM if the faculty wants to.

Originally, I had the idea to have people stay inside the space to leave their mark, either through smudges on the glass, or the hair they drop. However, I find that there is very little link between hair and smudges with birds, even though there are many implied links (for example, smudges = birds that smacked onto the window, or hair = the dead birds that dropped).

I replaced the hair with the forms and the smudges with stickers so people can connect with the idea better. The stickers are also inspired by an actually functional and (more) aesthetically pleasing way to prevent birds from hitting windows as seen here:

Overall, the intention of this space is to create a space for people to learn about the issue of birds getting lost in Sunken Plaza through their own observation. The space also provides people with a way to act towards helping the birds — which is also through a totally plausible solution. Lastly, if the space do accumulates a number of forms and stickers, it will also serve as a space for people to ponder about the problem. In its passive state, the space should be a conducive space for people to rest in, or think in.

I’m not sure how successful the installation will be, as it is mostly dependent on the people interacting with it and the bird sightings (which may be very random). This is also dependent on the timing people enter the booth. If there are many birds lost in ADM, but nobody enters the booth, the information will not be recorded. The installation is also somewhat time-based. Eventually, when the slips accumulate, the numbers will become more visible.