Held in Adobe Connect, the Symposium shifted performance into a new medium, the third space, where we rethink about the idea of a traditional “one-to-many” style of performances and embrace a new “many-to-many” style.

The performance on the first day is by Annie Abrahams, which she have different performers interact with the object on their webcam as seemingly random recorded phrases get played out. The webcams appear and disappear and everything appears messy. Annie then proceeds to lay silent on her chair and close her eyes, which the rest follows suit. This reminds me of DIWO where a group of people come together to do something collaboratively which they have a responsibility to perform and keep the performance alive. The overall unscripted-ness of this performance, together with the number of performers involved, creates quite a mess that I would call “glitchy”, where the unintended randomness is embraced during the performance that have made it glitched.

On day three, there was the performance by igaies. The performance started with the XXXTRAPRINCESS’ where they take on personas by using snapchat filters to simulate the characters in another frame. As mentioned in my Research Critique II, what makes a Third Space work is in participation where the parties involved must act according to their third space persona. By acting according to the persona and script, they have acted in the Third Space, where their third bodies have detached from the physical reality through the snapchat filters and the persona they play.

The performance was then followed by Roberto Sifuentes, where he have glitched his body by allowing audiences to place leeches onto his body, which he then performs a series of ritualistic actions, before laying down on the ground to get the leeches removed by a woman. This performance caught many attention, including my own, and it had me thinking about the relationship between the audience and the performers in the Symposium, and I will talk more about it below.

The Symposium brings audiences together within a shared online space, only providing fixed perspectives for audiences to make sense of the performance as we piece them together to form an idea of the whole thing.

This open discussion is further enhanced as we all take on our online persona, our Third Body, which we express our thoughts, comments, and ideas differently from our real persona. Also, because of the lack of interaction with the performance and the ability to instantly make comments, our reaction to different sections of the performances can be expressed without hesitation, and this allow our reaction to be less controlled and more raw.

On day 3 of the Symposium, the bizarre performance by Roberto Sifuentes churned many comments on the chatroom. 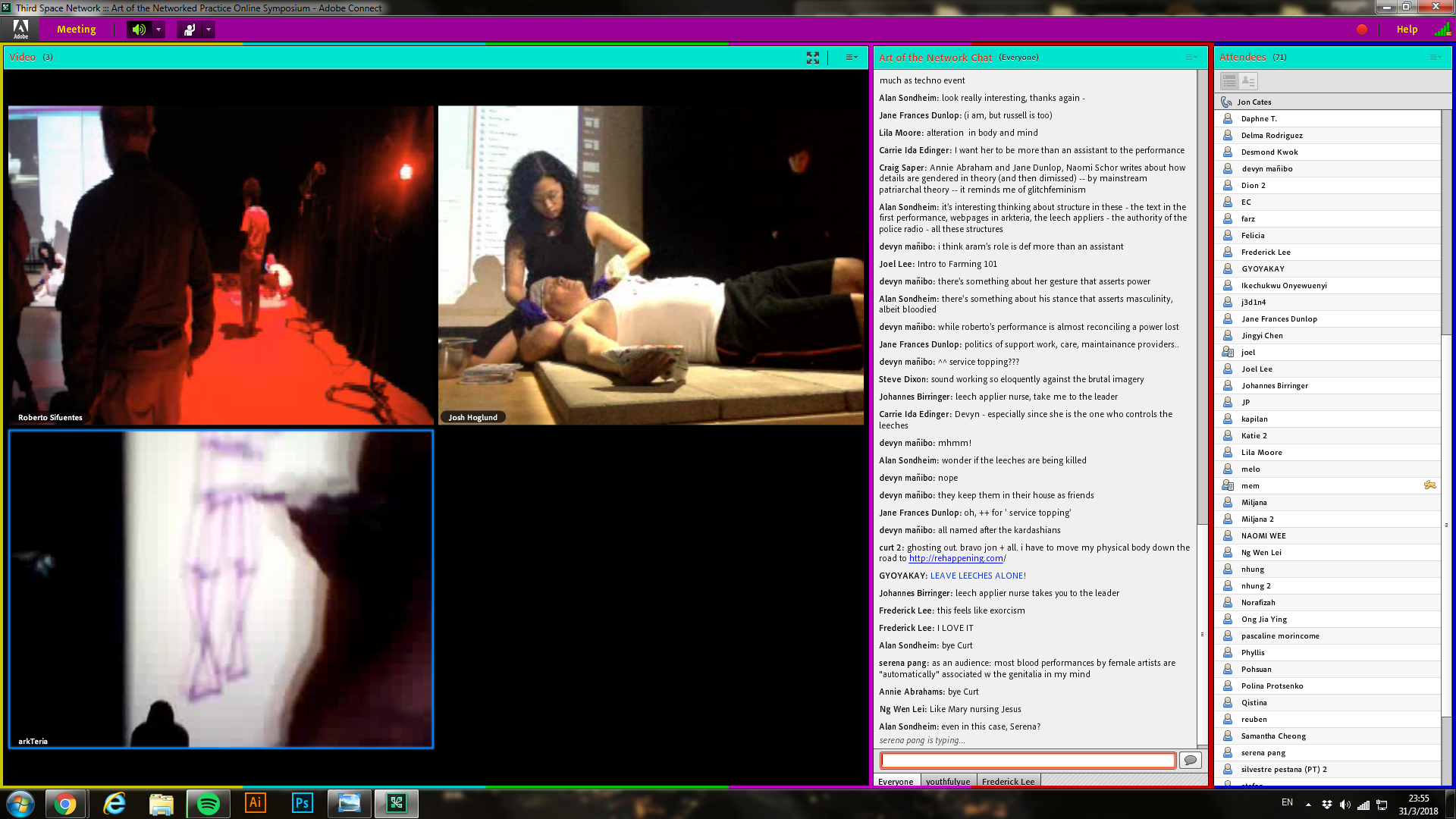 Roberto lies down to be have the leeches removed from his body.

In Roberto’s bizarre performance, he have added noise to his body by bleeding and sweating. He have thus cleansed his inner body of said noise, but at the same time glitched his outer body as he gets drenched in bodily fluids we dislike having on our skin. I find this relationship of glitch and purification interesting. Glitching is usually associated with impurity and ruination, but in this unexpected case, glitching and purification goes hand in hand.

As the performance goes on, the chatroom goes crazy as the audiences input their raw interpretations and comments. Some have made references to issues like gender and power, while others have made nonsensical, yet funny one-liners. This have led me to an idea: The different kinds of inputs of the audiences due to different interpretation and opinions have created a mess in the chatroom, adding noise and glitching it.

The chatroom seems meaningless to look at at first due to its messiness, but when we see the comments individually, we find them as the audiences’ method of release. We see the audiences’ reactions coinciding with the meaning I drew from Roberto’s performance where glitch and cleansing goes together. In this sense, the messiness, or glitch in the chatroom is a result of us clearing our mind, and reading it is a way of getting our mind cleared.