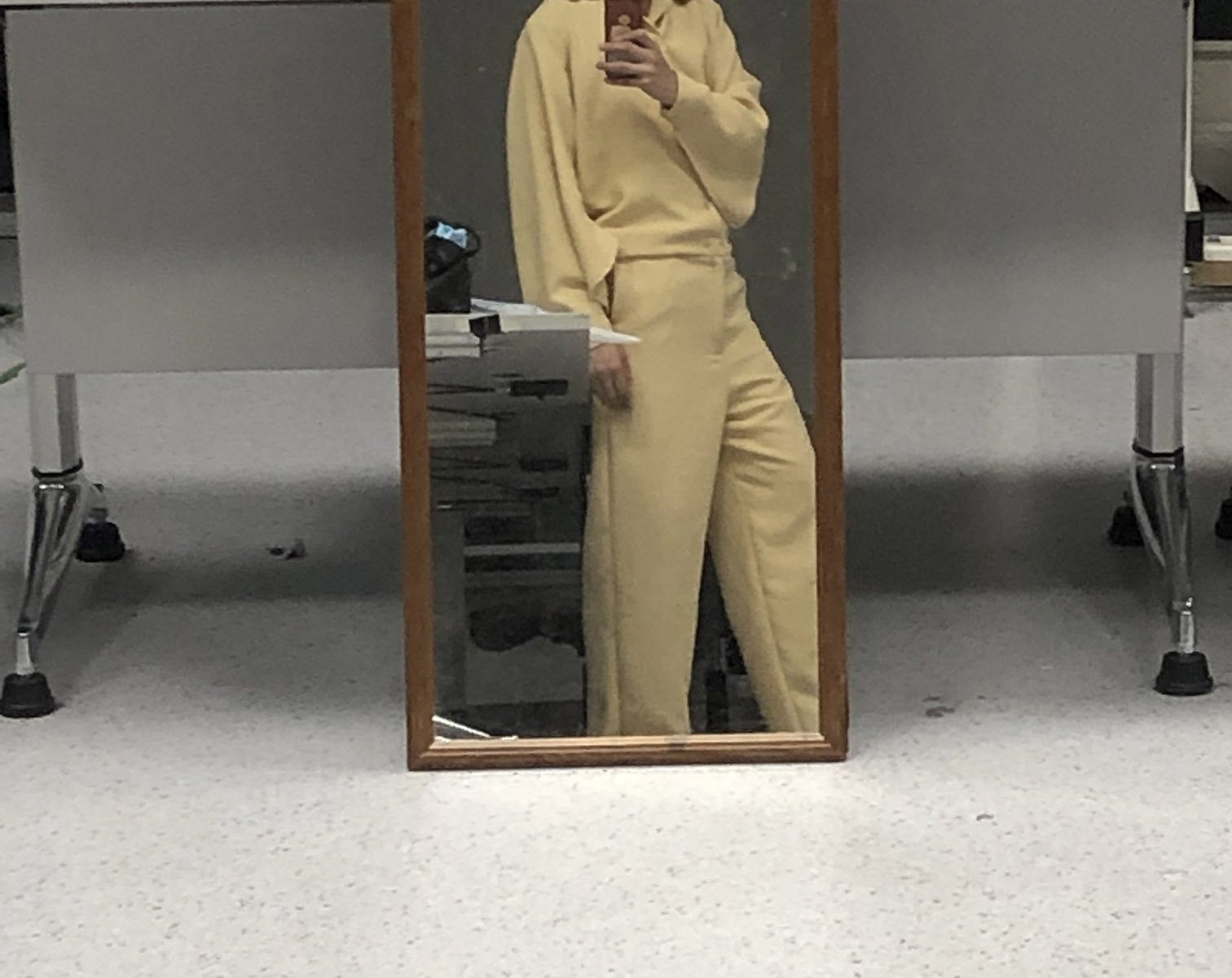 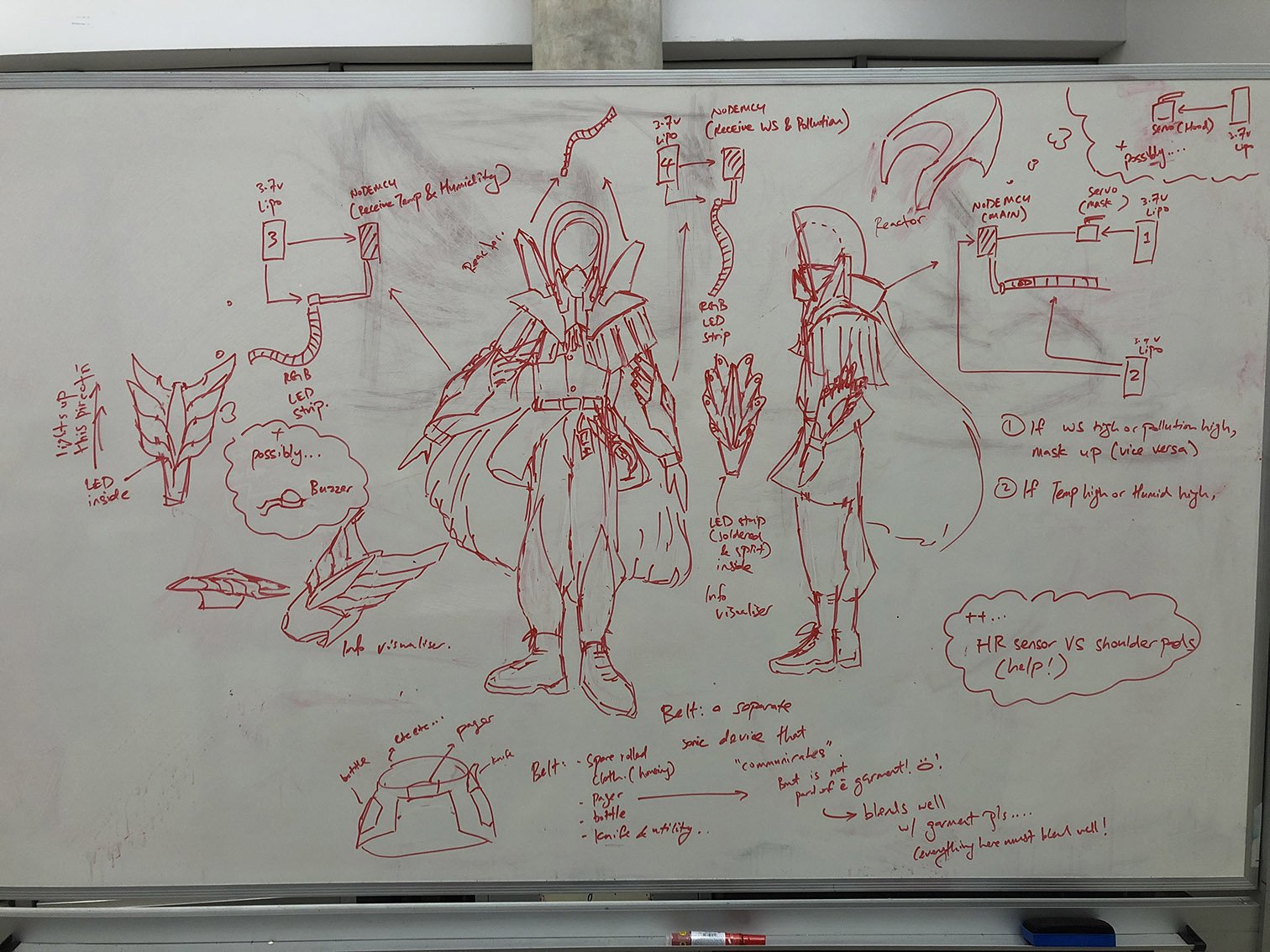 Last week, I was drawing this to collect my thoughts and it helped me figure out the logistics of my tech

I managed to complete the jumpsuit with help from Galina for the zippers and connecting the 2 pieces together! 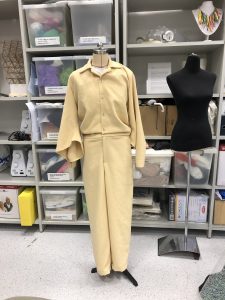 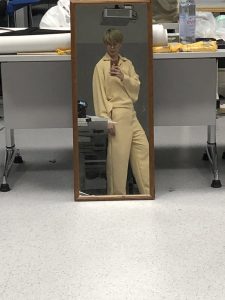 Galina also taught me how to sew button holes which was very fun!! 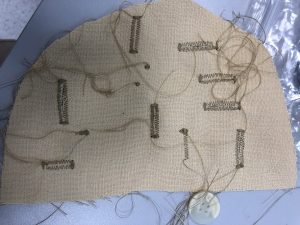 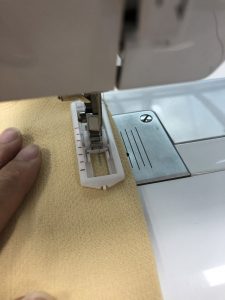 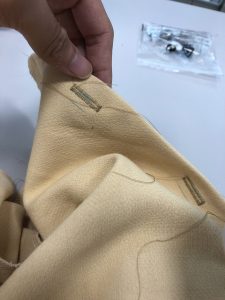 What’s left for the jump suit is for me to hand sew the buttons, to create button holes for the sleeves, to add front pockets, and belt holding thing. But that’s not my priority now.

This week, I’m working on the cape and armour pieces.

This Week’s Progress: (incomplete as theres more days this week to work on this!)

I was playing with the materials to create the look of desert beetles, but it failed so I will just stick to the pvc without material alterations. 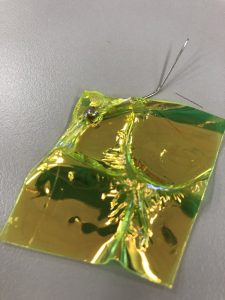 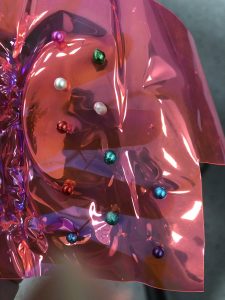 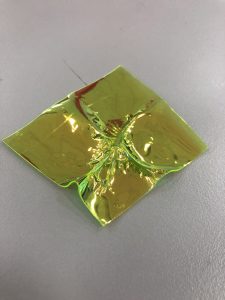 Cutting and putting things together: I was experimenting with the materials and turns out its more flimsy than I previously thought. It’s also much thinner than I thought so it doesn’t look as good if it’s single layered. Sewing 2 pieces together makes it look better, which means now I need 2x the amount of PVC ($$$$$$$!!!!!!) but at least I have 1m left of the pink piece which I’m not gonna use as pink contrasts too much with my garment. I’m switching to green instead. 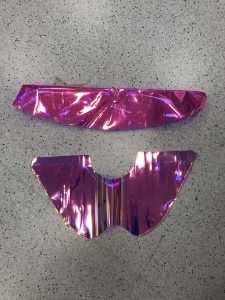 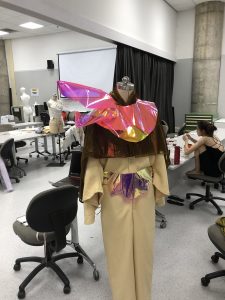 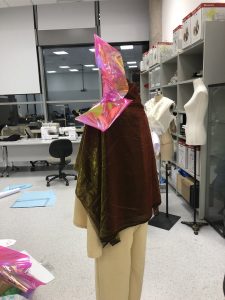 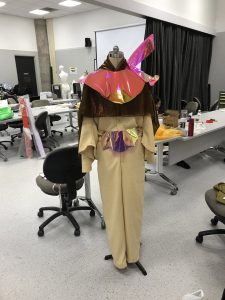 What was previously the neck piece was tested on the shoulder to see how it looks like as a shoulder piece.

I was having a hard time trying to figure out which cloth to use. Using both cloth together with the armour will make the whole look very weird. Too much is going on. Using only 1 cloth and the armour works, but I need to decide which to remove. In the end, I removed the metallic mesh cloth. 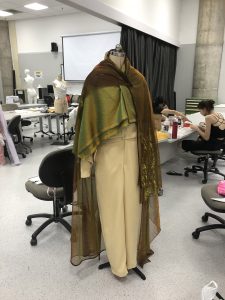 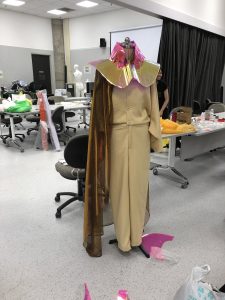 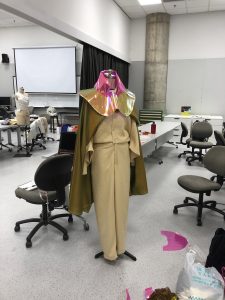 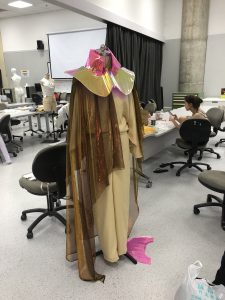 I also started sewing the cape piece to make it more frilly / have pleats. So yeah. (no pics tho)

So in conclusion, this week was more of a start of the next phase, and I am more or less confirmed for the entire design and I’m happy with it. I’m gonna continue the cape till I’m happy with it then I’ll start with the armour which is gonna be a pain 🙁 and I need to go buy the PVC also. Hopefully finish this by week 12 end so I can finish the electronics and have time to finish up the small details. And also work with Shah with the fashion runway!!! AHHHH!!!

Oh and also Mayle was working on a PVC vest and I took a pic of the pattern so I can tweak it (thanks Mayle!!!)

My sketch of how I think it will look like: 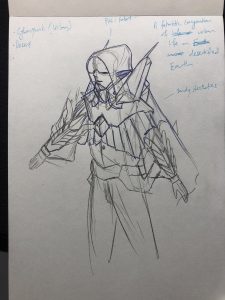 Ok out of topic but I think what helped me a lot was to imagine my concept as an Overwatch character. Anyway, here’s an updated concept:

Concept: nomad from a future dystopia city which is covered in dust from sandstorm due to desertification and global warming. Cyberpunk elements (iridescent armour + tech) to create a sense of urban-ness (because he’s still from a city) and sandy garment to blend with the desert city. A bit of inspiration from beetles also (in terms of their colour and appearance)

ALSO… I’m thinking what if the controller on my belt can control which city to look at. And because different cities have different temperatures and pollution levels, the values will cause the garment to react to it. Hmmm…