For our first project, we were tasked to express our future jobs through typographic portraits of our names (whole, part, nickname or initials).

Clueless as I don’t really have aspirations in life, I set out to list down impractical dream jobs more than concrete ambitions. This really helped as the brief did not restrict the occupation to be something practical or logical at all; I could be anything I wanted, even a Krispy Kreme Doughnut Maker. With Joy’s help, I narrowed to these 4 from an intense mind map of job possibilities:

A narrative is always important! Which is why the 4 occupations I narrowed down to are all intrinsically linked to the best drink in the world! COFFEE! In fact, when I think about it as impractical and unambitious it is to be a coffee farmer, I saw all these jobs as LEGITIMATE considerations (funny how I set out without actually thinking these were real prospects.)!

In my lifetime, I could be all of these!

In a way this was my timeline with coffee, linking back to typography I wanted all four spreads to spell out my name fully. I, therefore, broke down each letterform of my name into parts to fit each composition.

More details on letter form as I explain each spread individually!

Due to its light-hearted and simplistic aesthetic (which fits my concept of “simply coffee” well), I knew I wanted to work with flat-lay photography across all my spreads. Even though I knew it wasn’t going to be easy as I am not the most proficient photographer, I took this on as a personal challenge! Therefore things to get done; prep, art direction and the actual shoot itself!

Staying at home made this daunting task much more achievable as I had more creative space and leeway to obtain all the various props that I needed for my photoshoot. BUT, it was still not easy as some of the items were seriously hard to find; especially the old school coffee strainer. At the same time, the background for each spread was a pain to procure as well as I wanted to use backdrops reflective of each occupation as opposed to just some random vanguard sheet.

The entire scavenger hunt for all the necessary props took more than two weeks but alas I had everything I needed. I bought extra things just in case I changed my mind along the way as I felt the process of flat-lay photography was going to require quite a bit of improvisation depending on the resulting aesthetic during the shoot itself. 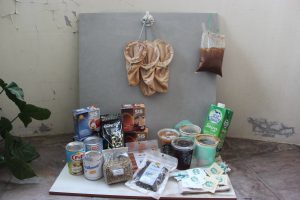 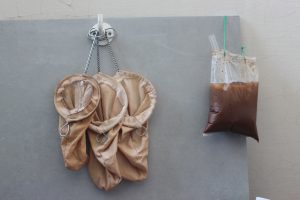 The way to decorate the spread around the letterform was limitless, therefore I made sure to be strict with the design of the letterform, only allowing the decorations to complement the typography and not the other way around. Here are some behind the scenes from the photoshoot: 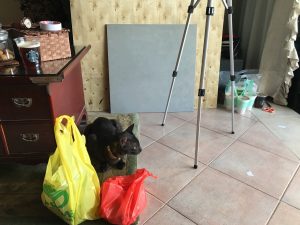 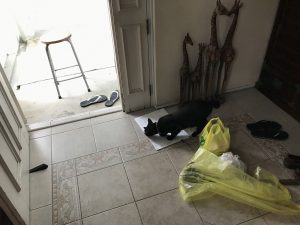 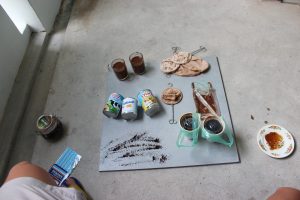 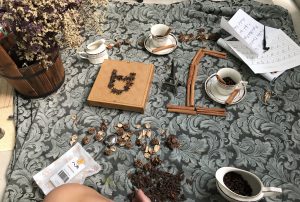 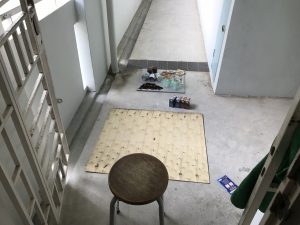 Doing a photo shoot alone was an insanely tedious process as you can probably tell from the set-up; nothing but a tall chair and a DSLR. Using a tripod was out of the question as the flat lay photography style would not allow for it. Furthermore, each time a piece of décor was out of place in the view cam, I would have to stow the DSLR, get down from the chair, arrange by estimation, get back onto the chair and recalibrate the shot.

The process would repeat several times until FINALLY, FINALLY, I WOULD GET A “IT MIGHT WORK SHOT!” I also had to be careful to shoot all that I needed as the process of retaking would require me to reset the entire spread again. Daylight was an issue as well as I did not have proper studio lights to back me up in case it got too dark. Working against the clock, I met with countless setbacks along the way, but thankful I was able to recover and improvise solutions on the spot. So I must say I am quite contented with the end product! 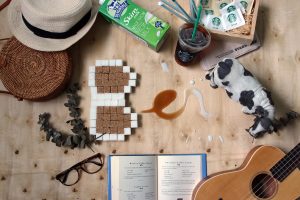 For this composition, I chose to an upper case ‘B’ and lower case ‘e’ & ‘n’.
I chose a brown and white colour code to run through the type as I wanted to emphasize the idea of a ‘fusion’; synonymous with a barista as baristas are essentially drink mixers. Furthermore, the latte style typography in the lowercase letters pays homage to the first Baristas in Seattle; the ones who popularised the latte drink.

For the letter B, I chose sugar cubes as baristas often made drinks that were sugar-laden. Furthermore, sugar cubes’ edges are blocky and rough, fitting nicely into the hard-lined structure of the upper case ‘B’. The hollowed out areas of the B are not left empty but filled with brown sugar cubes in contrast; this showcases how a ‘curvy stroke’ need not be composed of curved lines, but hard-edged elements do the job as well. I thought it would be appropriate to juxtapose the first letter of the composition from the others, hence a deviation from soft, curved lines.

For the letter e, I made a lower case e out of black ‘americano’ coffee from Starbucks. Its tail end conjoins with the lower case n fusing seamlessly.

For the letter n, I made use of whole milk (the dairy product baristas use) to create the soft curvy letterforms.

For this composition, I wanted to show the kind of life I as a Barista would probably be associated with. Staging a “White Girl” scene through the surrounding elements, I felt the use of a “wooden table” background was a nice touch that enhanced this feeling; a laidback and carefree demeanour. 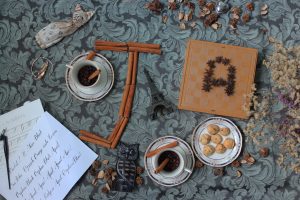 For this composition, I thought of using different elements to create my types. The elements would reflect the qualities that a coffee expert would be proud of. I attempted to bring out the “intelligent” aspect of my future job as a coffee know it all, not just through the type but in the surrounding objects and background as well. Spiced coffee is often enjoyed by very niche groups of coffee drinkers; therefore I decided to play with spices to create my type form.

For the J, I used cinnamon sticks which therefore explains why I chose the upper case J instead of lowercase j. Working around the confines of the elements resulted in a type that reflected much sophistication.

For the letter A, I placed star anise spices on top a chess board. I arranged the star anis within the squares of the checkerboard to mimic chess pieces.

I think this composition brings out the “sophistication” or some would say “atas” part of my future job as a coffee connoisseur. Through the various items that represent different facets of intellect. I like how the emerald green tapestry really complemented the shades of brown from the spices and dark coffee granules. 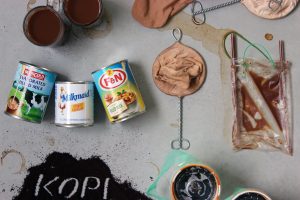 I had a bit of fun with this composition. Recalling my own coffee experiences, the Kopi Uncles that I have come across are often clumsy and in a way reckless as they serve you your drinks; resulting in spills and stains all over the acrylic tables. I wanted to create a spread that would reflect this messiness and chaotic environment of a coffee shop. I decided to use what I like to call “accidental” type forms, whereby the elements positioned appear somewhat random and unintentional but upon closer look, the letter form will become reveal and become apparent.

I used tin cans containing evaporated and condensed milk to create my letter ‘M’, arranging it in a subtle manner as the two ends seem to dent in just slightly.

The ‘i’ is represented from a used coffee strainer a very common tool to brew coffee in local kopitiams. I used a lower case ‘i’ as I realise the type form had already been created for me; albeit a little weird with the ‘dot’ being so much larger than the thin metal body. Somewhat unorthodox, but I felt it worked perfectly.

For the letter N, this is by far my favourite handmade type even though no one really drinks ice coffee with two straws haha. I gained inspiration for this while resting at a coffee shop. Someone earlier had finished drinking his bag of tea and had thrown the plastic bag on the floor. The remaining tea in the bag had created unique patterns by filling up the empty creases of the compressed plastic bag. Took a while to get this type. I used an uppercase ‘N’ as a lowercase ‘n’ with its cursive top would create a very unnatural crease that I found quite forced.

I think this composition manages to achieve something quite unique compared to all the other spreads, in that the letterforms created are subtle and less ‘in your face’. The background of this set was especially hard to find as it was not easy to find an unwanted coffee table. However, I eventually manage to find a floorboard with a texture that resembled what I was looking for. 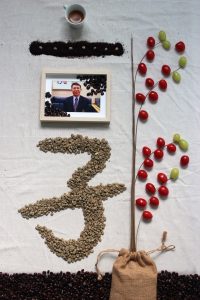 This composition lays a foundation for the previous three compositions. Coffee Farmers obviously play a vital role in the process of coffee making. Without them, the other 3 would not exist. As farming is often a family affair, I used my Chinese surname 郭as the type form for this spread. The goal was to achieve an oriental look; resembling the kind of photos you usually get on the cover of a primary school 好公民课本。I also wanted to showcase the process of coffee farming through the type, therefore I broke down my surname into smaller Chinese elements; 一，子，etc.

Starting from the ground up, the Chinese type 子, translates to son/child, therefore, I sourced for green unroasted coffee beans and used them to form the type as a way to represent the immature nature of a child.

The 口, at first glance, resembled a window to me; I placed a picture of my father as a way to link back to the ancestral superstitious blessings some farmers continue to practice to this very day. With the picture of my father above the 子type, it made drawing the family connection much clearer.

For the 一, I used grounded up coffee granules to mimic a coffee plantation’s soil.
I placed the green coffee beans at regular intervals to display the sowing of seeds.

I represented the side Chinese character using “coffee cherries” (actually cherry tomatoes and grapes). Growing out from the soil, the coffee cherries twist and turn to form two hollow spaces that resemble a ‘B’

The dot at the top of the composition is represented by a freshly brewed cup of espresso. The end product of coffee farming.

Essentially this composition pays homage to my family name as the tradition of coffee drinking was passed down to me by my Dad (much like how a farmer typically inherits their land from their own forefathers). Creating this Chinese character was very exciting as the more I compiled the better it looked; reflecting how Chinese characters usually work best and form more complex words when they are put together. 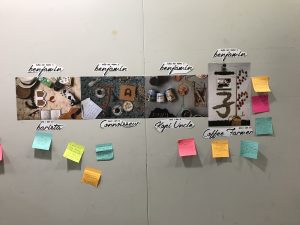