For this project, Peter told us to design and construct a 3-dimensional sculpture/device that makes a record of its own movement. We had to synthesize the relationships between material form and movement.

Instead of basing my system around a certain movement, I decided to construct a foundational idea that I could slowly build upon. This would remove any pre-conceived notions on what my machine would do.

I knew I wanted to play around with an idea that could create/recreate “music”. As ‘sound’ wasn’t of paramount importance, I decided to substitute the sound aspect with colour; with each colour representing a different note. Here are some sketches of me playing around with the above ideas:

Ultimately, I decided to focus down onto the piano system alone as I wanted a degree of interaction the player would have with the machine; the musical box would not achieve that as it would probably be a fully automated system.

For the piano system to even work, I needed to figure out a way to recreate the internal hammer system of the piano as seen below.

This would prove to be the most daunting part as the entire system working hinged upon how functional I was able to create this “hammer”. Here are some draft mockups:

Although this version worked out, it was unreliable as the hammer hinges upon hardened hot glue (had a bit of flexibility to it) and was aesthetically pathetic:

Consulting Peter, we came up with a solution to improve the fulcrum ability.
Broken down into 3 parts:

Pressing Mechanism
Instead of using hot glue as the cement, a thin aperture would be drilled through a wooden dowel and a thin metal wire would pass through. The wire wines tightly around a giant wooden clothe pegs (used to retain height and size consistency across all keys). This allows for less pressure on the turning points of the wooden dowel

Rotatory/Fulcrum Mechanism
The supporting structure holding up the hammer portion would be made out of two tubes, one large wooden dowel and a larger hollow acrylic tube. This enables a rotating feature (acrylic tube) about a fixed axis (wooden dowel).

Hammer System
Put both mechanisms together and you get the hammer system. Fitted with an ink pad at the very end; when the key (clothe peg) is depressed, it activates a series of connections that causes the hammer to strike down onto the mark making surface.

Video to illustrate the descriptions: IMG_4320

With the essential hammer system out of the way, I proceeded to build the main body of the piano system:
1) Fitted all the piano keys in the position that I wanted.
2) I jigged-sawed two identical sides and backboard for my piano system.
3) Added in pivoting bar (wooden dowel and acrylic tube)

As the hammers are stationery, a stationary mark making surface would not be ideal as it would just be the hammer striking the same spot over and over again.

Inspired by the idea of a piano manuscript; I decided the best way to capture the movement and flow of a song would be for the manuscript to be in constant motion (left to right). My mark making surface was going to be a roll of toilet paper as apart from it’s cylindrical shaped that enabled for rotation about an axis, it was cheap, easily replaceable and the more absorbent surface would collect much more ink, making for a clearer mark.
Learning basic electronics was going to be necessary as a motor would be needed to pull the manuscript. I tested with two motors procured from Sim Lim Tower:
1) a weak, fast and cheap motor
2) a strong, slow but incredibly expensive motor.

Unfortunately, after much testing, I realise the latter was needed as the cheap motor would be too fast much less powerful enough to pull the toilet paper. As a result, I had to settle for the expensive motor as there weren’t any alternative solutions to troubleshoot the situation.

At last, everything was coming together. After fitting all the components together, I soldered the electronics and added an on/off button to activate the machine by.

Then, I met with another issue. The inkpads were not translating the ink well enough, the resulting marks were thin and lacklustre. I thought of a few solutions to this problem such as adding a solid surface backing behind the mark-making surface and using a more expensive toilet paper that would hopefully absorb even more ink. But nothing seemed to be working.  Eventually, I decided the best way forward would be to saturate the inkpads with food colouring.

Video to illustrate: No Ink Video

The piano system captures music in colour instead of actual musical notes and sounds. The idea of this work is to capture and reflect the tune of any song into beautiful colour patterns. Upon completion, the ink pads can be capped back on to reserve ink and the “manuscript” tears easily for safekeeping (as seen in pictures below).

Something Cool
Although I didn’t plan for this, if you look close, you will see that some strokes are longer while others are short, this is not because the machine ran out of ink but reflects how long each key is being pressed for. Longer depression results in stronger, bolder marks while short depressions result in light staccato repetitions.

For the final project, we were tasked to explore the relationship between, form, space and visuals in order to choreograph and optically driven experience.

I drew inspiration from an American artist called Micheal Murphy, a perceptual artist who created incredibly optical works through the play of 3D objects. A set of installations using hand-cut bulletproof glass really intrigued me:

Held up by strong invisible steel cables, Murphy layers different coloured panels over each other achieving a visual work that is best appreciated from only one angle, the front. I wanted to try recreating and implementing His concepts for my final project.

After consultation with Peter, I realise this wasn’t exactly going to be an optical illusion per se. However, it was still going to be a visual experience.

As this was “recreating” rather than ideating our own, I figured I’d try to stick as closely as possible to how the artist himself would create these works. As starters, I sketched out an image and rendered it out digitally. I stuck to grayscale as I was unfamiliar with the process and wanted to limit to just 4 layers at most. I felt working with a coloured image would end up making it very difficult to separate into just 4 layers as a  subject matter such as the human face often contains a myriad of tonal range for it to look realistic. Furthermore, working in plain grayscale would expedite the process of paper cutting as colour could be achieved through the paper itself. 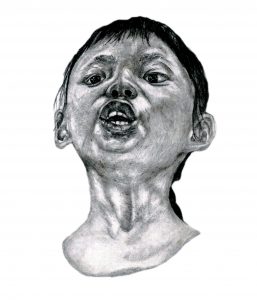 Making sure for there to be various tonality as I wanted to split the image into their different colour layers. Using a 3D rendering tool; I separated the different layers as such:

The idea was to print out each individual layer and overlay the layers on top of coloured paper. I would proceed to use an xcto-knife to trim off all white areas leaving only the colour portions. The cutting should reflect quite nicely on the coloured paper.

However, after cutting the first two layers and hanging them up on a suspended boarded, I realise there were a few problems:

1) Bottom layer needs to be the lightest area
2) The images were much too to be appreciated from afar.

As a result, it was difficult to tell what the image even was. In order to troubleshoot the issue, I tried to incorporate light at various angles: 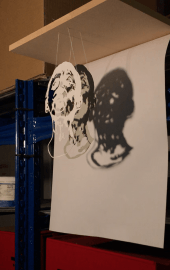 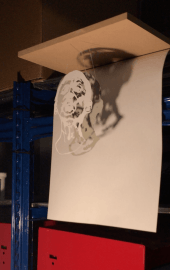 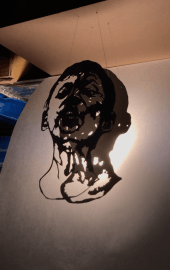 The light didn’t do much apart from giving me another idea. I decided to try out transparency instead of paper cutting. 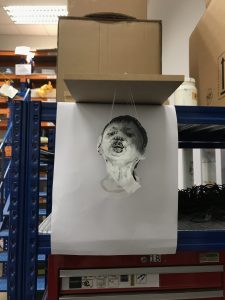 From far transparency worked a lot better with the resulting image being clearer and at the same time so much more detailed. I followed up by implementing the light source to see what it would do: 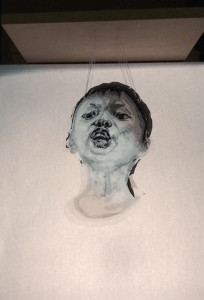 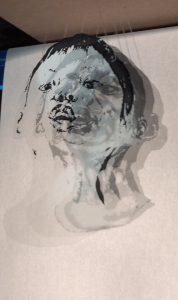 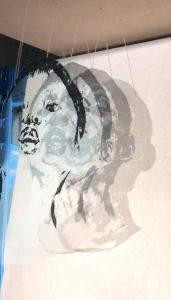 Nice! However, I felt from the side view, it would still be pretty obvious that the forming image would be that of a girl. I wanted the ambiguity when viewed the sculpture from the side. This is to force a visual perspective onto the viewer so that they would see from the front only.

Instead of separate layers, I compiled all the layers together and spliced the image by parts.

I created a suspension board and glued on a piece of tracing paper to disperse the light from the lamp. This was important as without the dispersion, the light would be too glaring and the image would be obscured completely from view.

a reflection of your past…

The reference photo I viewed to draw my image is of a young girl whom I’ve taken care of since she was 6. I found it ideal as even though she still resembles her young self, it is merely a fragmented reflection of who she is now; a past illusion. Visible only from the frontal perspective; my work advocates that our past and complete self can only be appreciated when viewed from the right angle.

Peter Summarised the last lesson by explaining to us the rationale of this last assignment. He told us that it was critical to understand the process of making something even when it has already been made by someone else. It is one thing to understand visual knowledge but it is another to construct it in real life. Comprehending visual knowledge is always going to be different when you have to do it for yourself. For instance, a different skill that wasn’t previously taught to you doesn’t always make sense, but when we try it for ourselves, the process of delivering the outcome often makes us realise why.

I found this assignment restrictive at the start. As I started to work on it, even though I was the one constructing it, it seriously didn’t feel like my own. But after Peter’s explanation, it kinda made sense why we were doing what we were doing. Ideas and concepts are always being borrowed, and sometimes, it’s best that we take the time and effort to understand them on a deeper level. What we think isn’t always what it is!