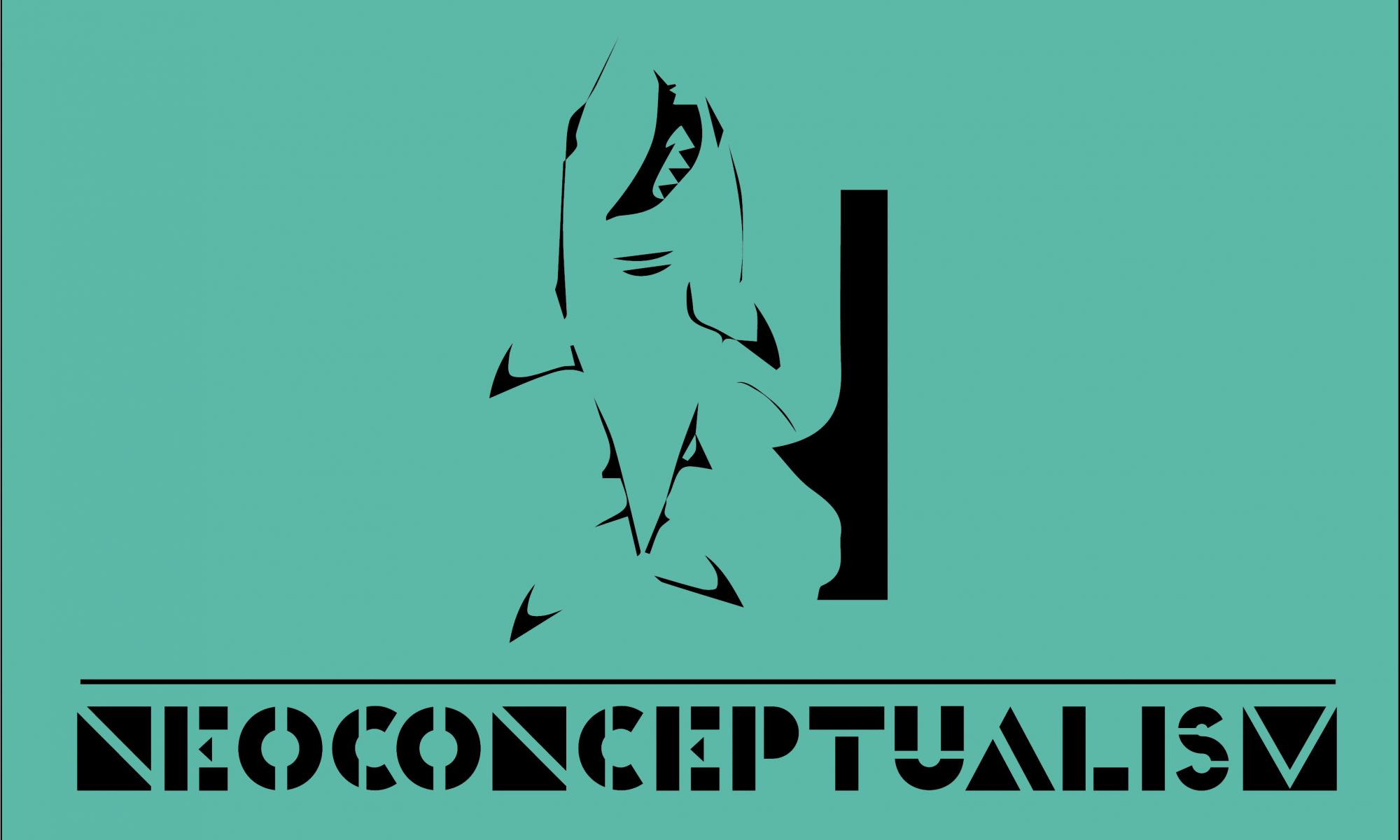 Duchamp defied the conventions of art the day he was denied the privileges as a Cubist painter and was abandoned by his contemporaries. He was left without any status on the quagmire interlinked between Cubism, Futurism and Abstract., and with that, he created Conceptualism. Conceptualism closely paralleled Dadaism, spearheaded by Duchamp; striving on nonsense, irrationality, and anti-bourgeois. Hence, Dada is headlined by unique traits like denouncing societal set utilitarian functions of found objects and materials, as well as the visual indifference that gives high art status to concept-centric artworks. They also label aesthetics as unnecessary priorities, all in the name of enhancing the phenomenal quality experienced looking at the artwork. Flying through half a century later, Neo-Conceptualism evolved from the aforementioned predecessor, offshoot from various factors like shock tactic, openness to material, contemporary culture and entrepreneurial marketing. In this essay, I will highlight how Neo-Conceptualism redefines the boundaries of the very redefinitions of change Duchamp started, comparing Conceptualism championed by Duchamp to Neo-Conceptualism steered by the Young British Artists.

Conceptual Art and Dada were both born in the midst of humanity’s biggest travesty, World War One. It questioned the purpose of art in the times of war and disturbance, especially since Duchamp’s contemporaries were trying to break boundaries with artistic expression. Duchamp was an avid painter who seasoned with abstraction and tilted towards Cubism and Futurism. He was, however, denied acceptance by his contemporaries like Picasso. This drove him to seek out an alternate identity for high art, pursuing non-art function to be placed in a gallery space. Non-art function was a significant hallmark of Conceptualism, pioneered by Dadaism*.Duchamp was not interested in retinal art at this point, art that focused more on the aesthetics. Instead, he would cancel the utilitarian function of an object, and assign a new function that fits well in a white cube. In 1917, Duchamp epitomises the assault on convention and gallery notion of high art by displacing a urinal used in toilets into a gallery space. It is a public urinal placed on its back with a pseudonym “R.Mutt 1917” signed on the sides. Duchamp provokes communication with audience when they question the new found purpose of the amenity that is commonly used to drain urine, one that is useless when the drainage is left on the sides. In this way, the factory designated function of the urinal is estranged, instead converted into one that is purposefully mind boggling.

Another trademark would be the visual indifference that reflected the humour and wits of the Conceptual artists. It was a counter to the logic of the scientific era, where humans living through the world war becomes too complex and idealised. In the Bicycle Wheel 1913, the first readymade by Duchamp, he mounted a bicycle wheel onto a painted wooden stool. This work was a clear representation of how Duchamp’s mind worked. Duchamp cancelled the function of the bicycle wheel by placing it wheels up onto the stool, making the wheel useless as it cannot rotate to travel. The stool has a metal pipe forked into it, negating its use as a proper stool for sitting. It was a pointless motion that reoccurs overtime as Duchamp spun it, out of his curiosity for observing kinetic energy. Duchamp was interested in the visual irony made available with conceptual artworks, placing two polarities of meaning side by side. This contrasts Duchamp’s rational back to men’s obsession with logocentrism, understanding definitions and meanings that are inherently “birthed” into objects when the factories created them.

Fast forward into the 1990s, Neo-Conceptualism began as the Young British Artists  (YBA) gathered to create new, innovative works. The YBA was not an arbitrary term, instead it was a successful economic label. Charles Saatchi spearheaded the economic thrust of the label, promoting artists that he favoured, like Damien Hirst and Tracey Emin. The YBA were significant followers of the Conceptual movement, derivations of factors like re-appropriating functions as well as the visual indifference of various materials. YBA, however, had alternate essential traits birthed out of the difference in timeline, mainly: contemporary relevance, shock factor and entrepreneurial aggression.

The YBA grew in the 1990s, propagating media culture after the birth of the contemporary media boom. This was an important factor that the YBAs could use to relate to the audience, such as Damien Hirst’s “The Physical Impossibility of Death in the Mind of Someone Living”. This work portrayed a dead shark suspended in a tank of formaldehyde, looking as new as the day it died. This artwork is a classic showcase of the idea of affect and effect, portraying the idea of mortality in motion. The work triggered a universal human response of fear, urging humans to cringe as they look at the artwork. The shark is in suspension, in the midst of a “dive”, suggesting an affect. The effect comes in when the audience realise how fatal the objectification of the shark is, as an apex predator, and how much strength it can amount to. The idea of death comes even more significant and ironic as the shark itself is present in the tank as a creature of such ravenous hunger- dead; while its reason for death unknown to the audience. The contemporary culture was a significant factor in amplifying this work’s phenomenal quality. In 1975, “Jaws” was released as a blockbuster that acclaimed $470.7 million , creating a contemporary cult following that fantasises the creation of this natural killer. Hirst is playing to this idea of conceptual indifference, comparing the identity of sharks in ancient history to the identity of sharks following the release of “Jaws”. Hirst’s work creates an air of eeriness and death with the use of the vitrine, allowing audience to look at the shark as it biologically deteriorates through time. This is one of the most significant artworks by Hirst, or any contemporaries in terms of economic worth, valued at $16.6 million. Hirst utilised the contemporary cult fantasy of sharks, paired with shock factor of mortality to drive up the value of neo-conceptual art like this.

Shock factor was another trait significant to the YBAs, an alternate step up from the Conceptualists. This shock factor was often presented through themes of life and death, as mentioned in the artwork above.It is to create a concept or aesthetic that is so jarring that it stuns audience introspection wise. In “A Thousand Years”, it is a rectangular vitrine divided into two sections: One with a white die that breeds maggots and flies, the other with a severed cow’s head and insect-o-cutor. The phenomenal quality sets in when audience stares through the glass vitrine, prickling their sense of sight, sound and smell. Glass is an ephemeral material, strong enough to hold back significant weight, yet weak enough to shatter with enough pressure. The transparency of the vitrine, geometrics and sharp edges created a clinical environment to stare at the alternatives of clean and dirty. Audience take up the position of a higher entity, staring into the microcosm of death and life, while watching the inevitable truth of mortality pass by. Another artwork that utilises the shock tactic would be Marc Quinn’s “Self” 1991. This is a self-casted sculpture using his own blood, 5 litres every 5 years. This work is refrigerated and kept in its original form, despite it degrading over time. This artwork is a representation of life and death as audience stares at mortality through a hyperrealistic scope. The audience looks through the aging of Quinn down a timeline. The idea of life comes in more significant as blood itself, is alive. The biological structure of blood is kept alive when the refrigeration keeps it from decomposing. Secondly, Quinn denounces the biological function of blood in terms of transporting essential living materials, instead, he kept the biological symbolism behind it as an amplifying meaning that circles back to logocentrism.

Neo-Conceptualism grew over time to become a catch-all miscellaneous bin of art by-products, including performance art, photography, or the amalgamation of the aforementioned movements. Neo-conceptualism is a derivation of Conceptualism with its trademark characteristics, evolving with the contemporary culture and societal needs and desire. Traditional art started as a theme for worshipping the elites, which gradually becomes desired by the middle class or poor to feast on it. The ideation of making art more accessible for consumption as true art, taken in by people of all classes, will and has become a norm that will keep art constantly evolving.

*Conceptualism and Dada will be referred together as one.