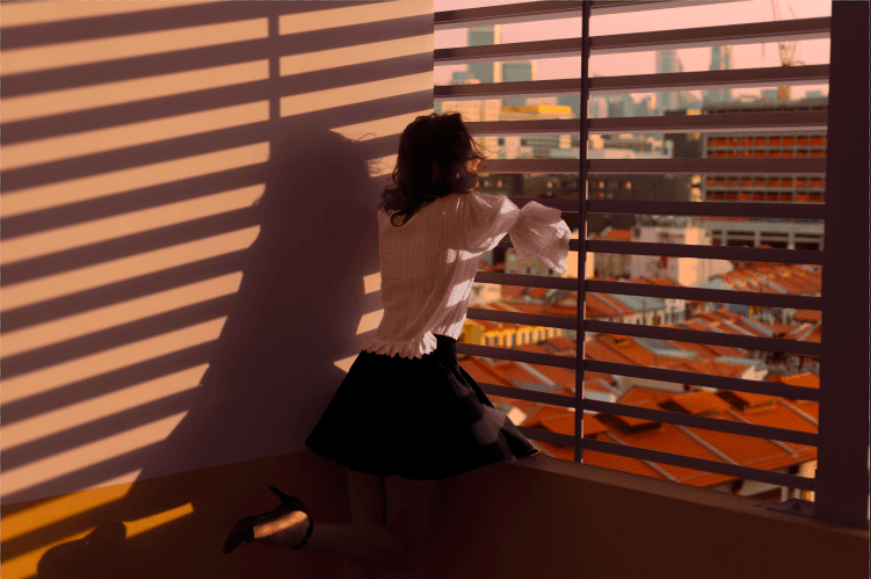 In assignment 2 we focused towards landscape style photography and editing with colour grading, on top of the previous lessons on cleaning up an image. I chose this golden hour shot of my friend Theo right beside a carpark in Little India. My style of photography and editing tends to be moody and drizzled with warm tones. I love to make the subject matters look they are in their own world of introspection and I found this image to be quite useful in terms of that. I would aim to accentuate the colours of the architecture outside as well, bringing out the smooth tones of the golden hour. The main colours I focused on were purple, orange and pink. 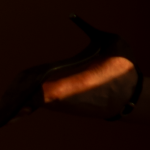 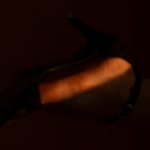 Firstly, I began by editing out any parts of the image that had any visually hindering details, such as dark corners of the feet.

I started the next process by masking out everything individually. I saw this process as a taxing one as the image can be split up into many layers: the indoor architecture, the outdoor architecture, Theo’s dress and skirt, as well as her body.

The reason of my grading was to increase the warm tones within the sky and how it lands on the red tiled rooftop of Little India. I believe that the golden hour ray at that point of time was merely bright but not sufficiently warm enough, so I added some pastel golden hues as well as increasing its contrast, to give it a stronger aerial perspective. This included the interior of the carpark as well, albeit the colour being much orange already. I wanted to add that pink hue that gives it a fantasy like structure. An issue I had was the density of the shadow within the indoor architecture, I wanted something much more wholesome and gives a strong contrast to the outdoor. I did so with layering of gradient map, switching between the light and dark tones, specifically orange and purple.

Next segment would be colour grading Theo herself, being the main subject, she should stand out from the environment. Hence, I asked if she could lift her legs up and actually form this hook shape, which made the image structurally interesting. It gives an additional albeit subtle different of introspection. (in my perspective) Colour grading wise, I lifted the tones with selective colour as well as a little bit of exposure to the blouse, as i realised only exposure could give it that additional jazz unlike selective colour, gradient map or level toggle. The masking of Theo was really difficult as I found the hair to be difficult to manoeuvre.

Just a little notes on my selection of toggles and layers. 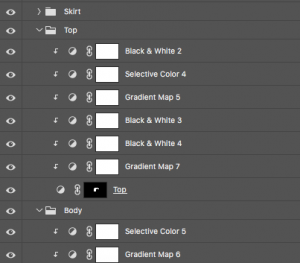 I primarily used only a few adjustments to treat the image, mainly selective colour, gradient map, black and white as well as levels. With a few exception layers that needed some exposure adjustments as I didn’t want to compromise the entire colour grading for the segment without raising white tone across. I used selective colour to raise brightness of most areas as it focuses on the coloured tone and act on it. I used selective colour and black and white to layer colours over the segment, after which lowering its opacity. I would use gradient map to drop colours into the shadow, to give density into the shadows like the indoors. 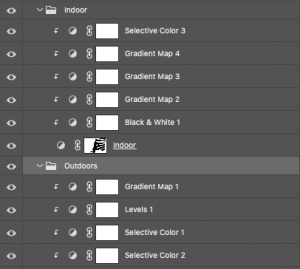