The initial sketch of this garment drew inspirations from the dramatic styles of Alexander Mcqueen and John Galliano, almost mocking the state of the pandemic through the moodboard of fashion. It serves as a counterbalance to the relatively tamed versions of the other 9 pieces as part of my FYP project.

This prototype was crafted entirely out of cotton to finalise the patterning required as the skirt and jacket requires extensive patterning to give rise to the architectural shape. It was lined over the boning skirt that was made to hold the “petticoat skirt” in place.

After the patterning has been made, the rest of the garment was materialised through the relevant fabric type- which will be explained further down. The first fitting was down with the model Gerald as shown below. As shown above, the garment is mainly crafted with sultan satin as the main body. It comprised of :

An angular shoulder jacket with two crepe flowers as the elbow patch.

A petticoat inspired skirt that is covered with ruffles that goes in different directions and wavelengths, ending with a big ruffle on the bottom. It is hand tacked  with thermochromatic prints.

Initially the idea for this garment was to have three spikes at the top of the headgear (shown below) that would rotate when the proximity sensor detects anyone coming too close. However, the aesthetic of the garment would fall out of balance with the three spikes as the bonnet inspired headgear looked cleaner without the adornment. Hence, the idea of the technology was changed as well to an alternate location of the garment.

An unspoken technology used within the collection would be the 3D printing utilised, a passive parallel to the wearability of technology.

The sensor would be placed at the back of the petticoat and the lights would light up around the exaggerated buttocks of the skirt (Displayed by the two rounded alternate coloured  organza) It indicates that safety distancing should not be an individual practice but a communication between two people. If said model was walking, I am practicing safety distancing to the people i am walking towards and could see. Therefore making the responsibility of other people walking towards me of whom I cannot see to practice safety distancing towards myself. It would be a panel of blue LED to establish strong contrast but also draw reference to the blue highlights of the collection. 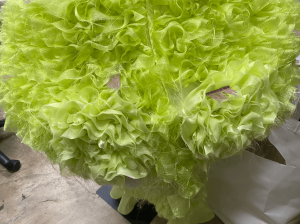 The concept of this piece is an amalgamation of the other 9 pieces of the FYP collection, serving as a visual summary of many other motifs. The three main concepts would be the motifs of covid19, the relationships of public versus private, and the parallels of futurist versus modernity versus tradition. Ultimately an exploration of time and space during covid19.

Within this piece, the mnain covid19 motif is the idea of fur stringing within the 3D print as well as the fabrics of the satin and crepe. It resembles the stringing that facial masks have at the surface of the wearer. It draws a strange reference to the clinical usage of masks as it serves to protect the person from the virus, as though the stringing is alive and detect the illness in a tendril-like manner.  It is shown mostly in the two images below: the petticoat skirt and the elbow patches. The purple 3d prints on the skirt serves as passive protection as it changes colour with temperature, drawing reference to the social distancing motif. Another motif would be the exaggerated skirt, making a sarcastic remark of the sedentary lifestyle many people led during the pandemic.  Last but not least, the motifs of the barricade tape is shown in the red laser cut wings don by the wearer as an obvious physical symbol of social distancing. 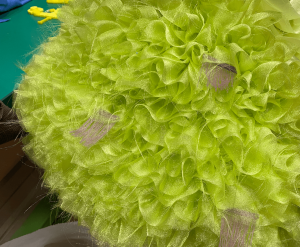 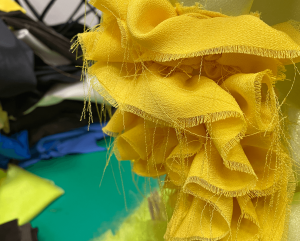 The idea of the barricade further evolves into the exploration of space within covid19. The idea of space and time was greatly impacted during the pandemic as people could no longer move around freely. As mentioned in Bradley Quinn’s book “Architecture and Fashion”, both fields serves different purposes but also aim to solve the same issues when one could not. During covid19, many people’s field of location was affected and fashion serves to solve that. The idea of private and public is shown in the play of opacity and translucency within fabric, as well as the layering of said fabric. 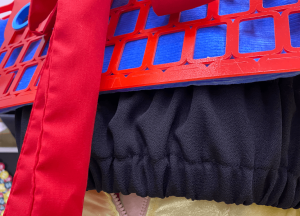 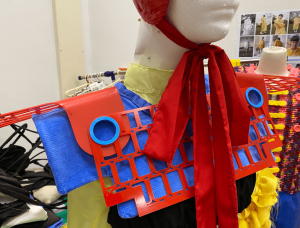 And last but not least, the idea of traditional versus modernity versus futurism is most obvious in the shape and design elements of the garment. The bonnet and petticoat-esque design serves to draw inspiration of tradition. The material and crafting process serves to introduce modernity into the exploration. While the futurist themes come in forms of the concept as well as prospect of the whole project.