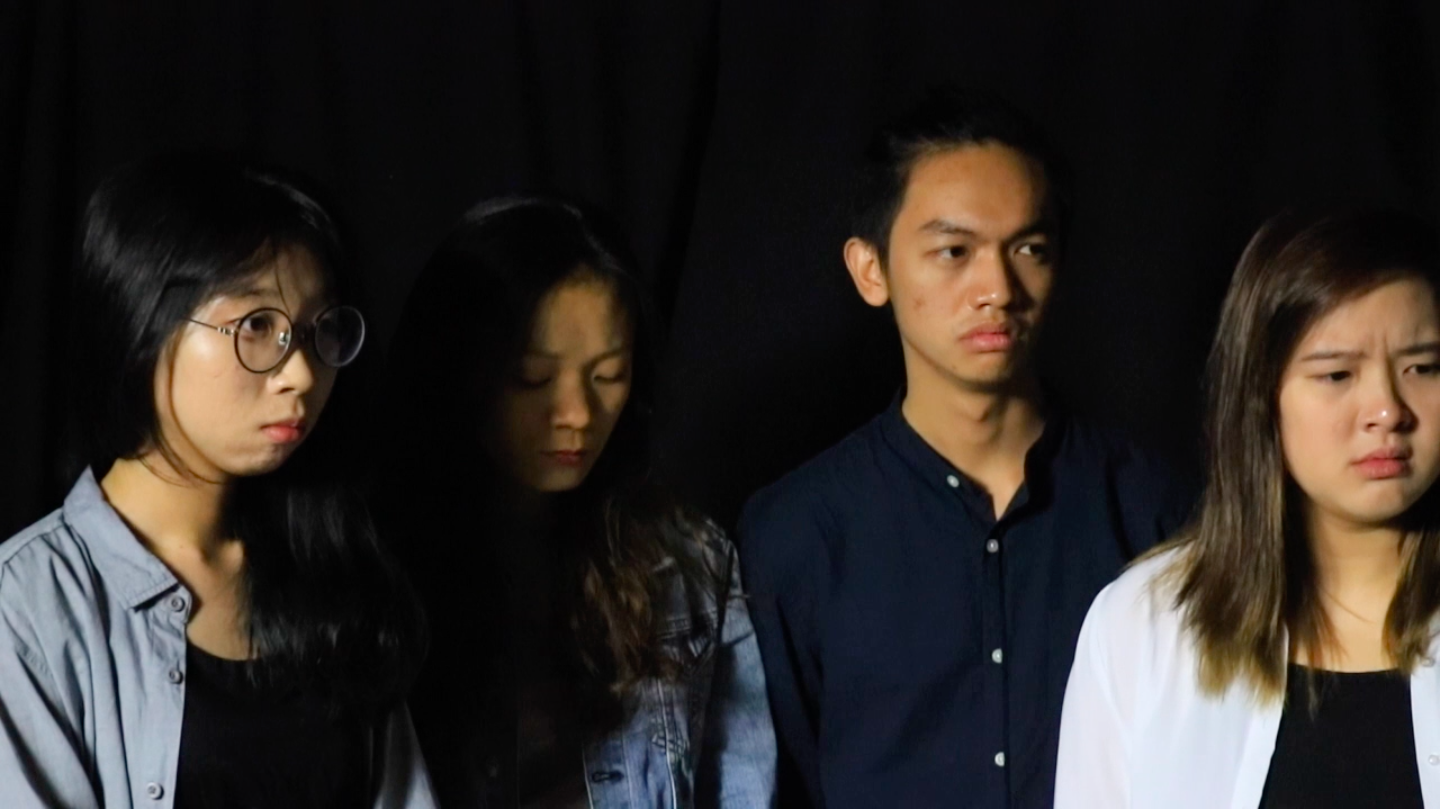 In this assignment, we explored on visual sequence and how sound can affect the intentions of a film. We were tasked to investigate the relationship between imageries and sound, be it a harmonious parallel or a paradox conflicting the audiences’ mind. 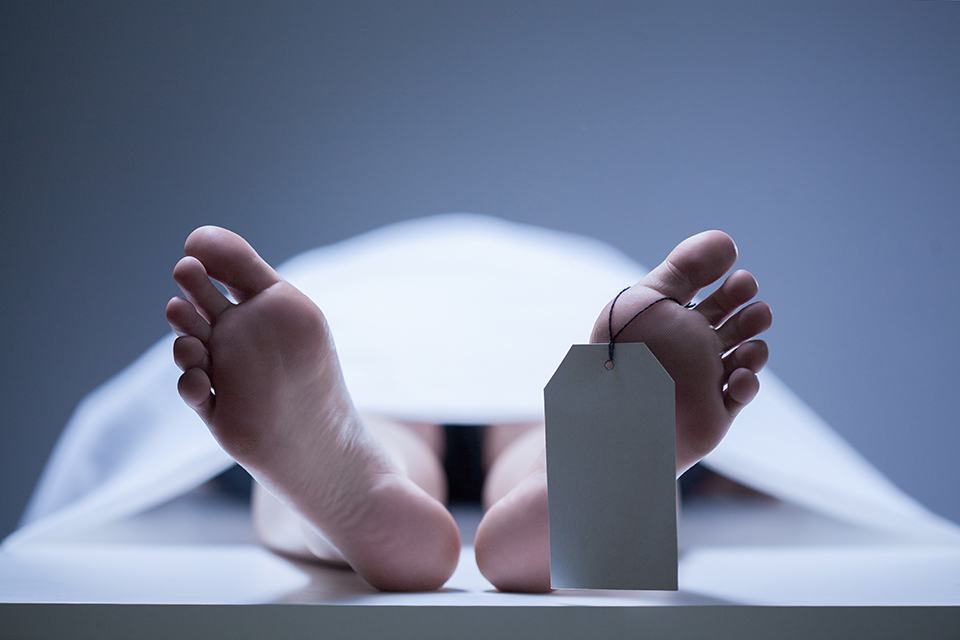 We started out brainstorming a few locations that we have never visited, listing down the most ludicrous spots like the Space, Heaven and even a toilet bowl. I finalised my location as the morgue, as I found that this particular subject has a lot of room for investigation, sound and visual ambience wise. In a morgue, you can hear loud wails as the family of the deceased grief over their loved one. You can hear a cacophony of metallic trays clanging as the mortician uses surgical scissors to cut the bodies open and proceed to throw it aside. You can also hear the eerie fluorescent light and bug zapper permeate the entire morgue due to the awkward silence. It is an interesting location, apart from its morbid content.

We proceeded to create our storyboards to have an idea of how we want the visuals to look like, and mine turned out to be like this after two sets of consultations since I used the same storyboard for lo-fi and hi-fi testing, altering mostly the sound effects.

The narrative of this short video parallels between two concurrent scenes with a black background. Firstly, the video fades in with a silent slow motioned scene of a group of people whimpering. Then it quickly changes to a scene of a group of dead bodies lying down, breathing against a background noise of metal clanging- symbolising the metal racks a mortician uses. It rapidly transits back to the group of living, crying a bit more intensely with a louder voice, against a background noise of fluorescent and bug zapper. Moving back to the row of dead bodies, they are accompanied with actions that hints of their death: drowning, suffocation and excessive loss of blood. It moves back to the slow motion crying, this time with aggressive actions and louder, deeper moans. Keeping in the momentum of the loud noises, the scene exaggerates as the dead are seen shouting in pain and instantly cut off back to the livings’ crying, who are equally loud at this point. In the midst of this, the scene turns back to the dead, but it is now a close up head shot. The dead confronts the audience with their pain but is interrupted with a bright light from below, accompanied with the sound of a metal trolley being pulled open (hinting of the morgue door being opened). The dead are now silent and still like they are supposed to, with a background sound of people crying and buzz of the fluorescent light. The words “car accident” sets into a black screen, ending the video.

I was tasked to explore the theme of a morgue and fully express its quality within the short video with sound. This was physically challenging due to the law restriction and privacy issues regarding the morgue, since it is a sensitive area with emotional people, presumably. I decided to play on a narrative that was more experimental and theatrical, hinting of a morgue and not an actual one.

This narrative is the interaction of a group of people grieving outside the morgue and the dead suffering in the afterlife. Firstly, the living are seen grieving outside. They are in their private psychological space of grieving, but are seen interacting in a shared physical space, having that thin line of boundary and privacy. These are all under the microscope of the audience as the visuals and sound are slowed down, with every micro-expressions they have, seen and scrutinised. There is no grief left un-judged.

The dead are seen in a fantastical manner, suffering in their morgue body shelves, with the elements that killed them. This wasn’t actually happening in reality, and that is why when the morgue door opened (the light from below opened), the dead bodies remained still like they are supposed to. The one who drowned is seen having water poured on him continuously, the one who suffocated is seen having a visual cue of a plastic bag over his head, and the one who bled out is seen moaning in pain as his shirt is covered in blood.

The tempo of the entire video builds up with an increasing volume, moving from soft whimper to loud screams and moans. The psychological sound of the fluorescent light aids in providing the chilling environment, as the fluorescent lights are not that exaggerated in reality. The play of slow motion sound and fast beat metal clanging creates a paradox in the audiences’ head, confusing them even more. This was inspired by sound and video artist Bill Viola, which I will elaborate below. As the video moves on, the audience would eventually realise that the two group of people are related. The last scene sets with the three dead bodies not moving, but in a distance is the sound of the weeping family. The ending with “car accident”  hints to the audience that the dead actually died of a shared car accident, and the living are crying over this event- putting an end to the questionable narrative.

Ultimately, this short film questions the possibility of how emotions and time parallel or may not parallel. In reality, emotions does not translate well into time as it is a biological, real-time sensation, and when time is warped like sped up or slowed down, emotions are heightened in terms of sensitivity. 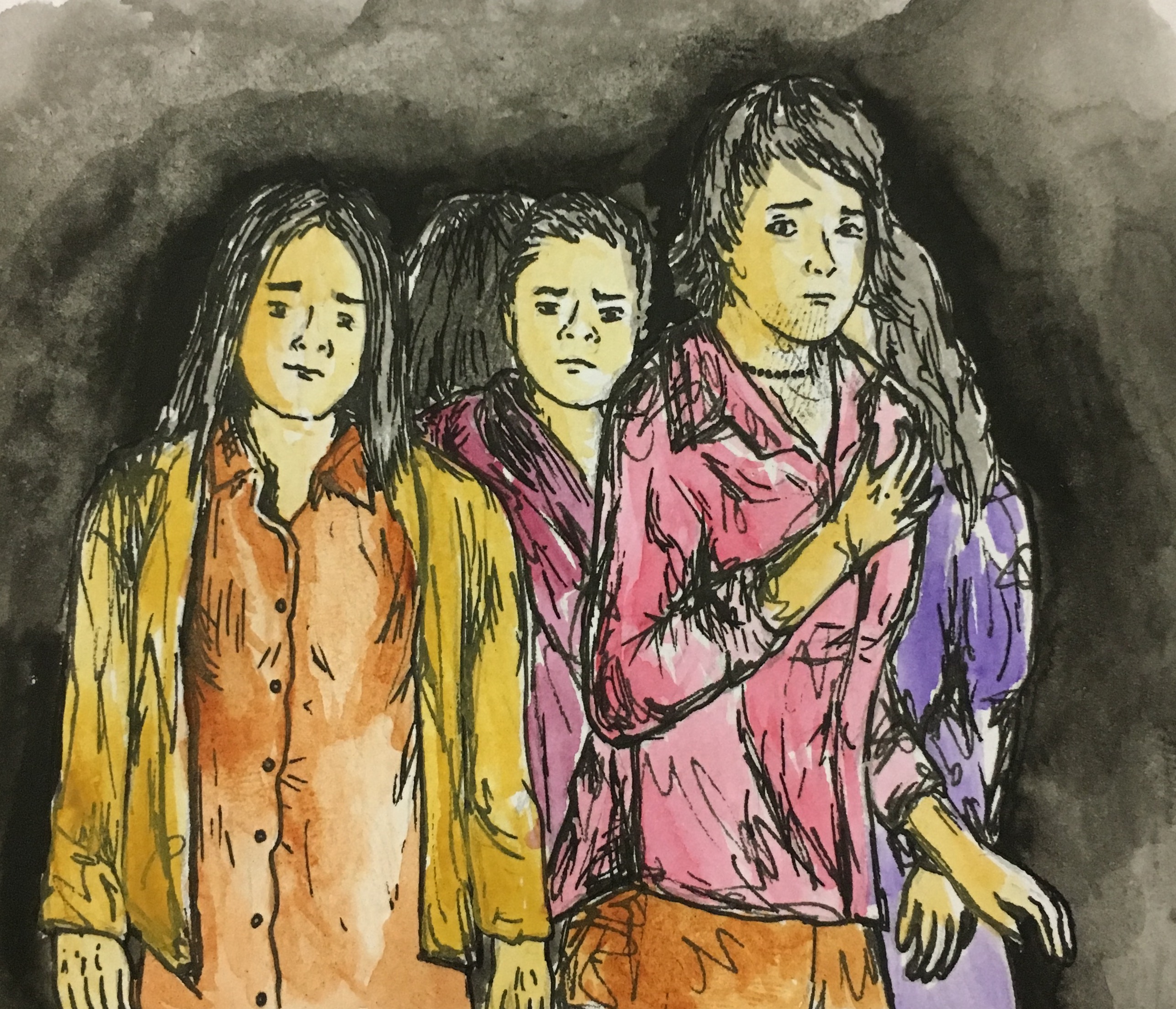 The link provided is the hi-fi storyboard of this short video: https://vimeo.com/239395953

Bill Viola is a video artist who explores on the theme of mortality, religion and spirituality through big screen videos. He also engages in slow motion and times speed to make the audience question the intentions of his videos. In The Quintet of the Unseen, the actors are seen in a crescendo of emotions as the video plays in a loop. They are scrutinised as their suffering are seen by the audience in every contort of their face and body. It has the visual effects of a tableau-vivant- a silent and motionless group of people put together to narrate a scene or event. Compared to his past videos, this work does not have a strong religious connotation to it.

In many of Viola’s works, he also uses elements like water and fire to bring out the idea of spiritual suffering. This is enhanced with the effects of slow motion, as every drip of water can be clearly seen on a large screen.

In my work, I decided to draw reference from Viola’s Quintet of the Unseen composition as I found that this spatial composition was really strong and theatrical, which i will elaborate later. I would parallel it with a triptych of “dead bodies”, which will have a different visual effect since they are seemingly in an afterlife state. I will also play with the tempo of foreground and background sound, along with psychological sound, making it much like a live action theatre scene. There will also be a resolution in my narrative, which tends to be only hinted in Viola’s works.

Production began with the planning of the usage of actors as well as the location, since my short video was live action and highly dramatic, it required strong theatre lights with a versatile environment that allowed me to pour water and light up fire. (Fire was not lit in the end)

I proceeded to set up a one directional light that shines at an angle towards the actors, mimicking a stage light. There was an attempt to seek out other light options as the stage light was mildly too strong, but it was still the best option. A black clothed background was also set up to create a black backdrop that enhanced the details of the actors’ faces.

In the attempts of achieving a harmonious composition, various attempts of demarcation were made to highlight areas where the actors are supposed to and not supposed to stand. The markings tells the actors where the vantage point of the camera ends, and which corners they will recede into the shadow if necessary. There is also a main focal point where the actors can stand to be in the focus of the audience. Information regarding the narrative was also given out to the actors to ensure that the point of conversation would be effectively used, as if speaking to the audience one to one. Whereas the rest of the actors can loiter around the interaction space with one another when not communicating with the audience.

Props were also used to highlight the narrative of the video, such as fake blood, plastic bags and pail of water. They are all used to enhance the visuals of the story. This was especially important in the scene of the “dead” as the visual aesthetics are desaturated and lowered in warmth to create a clinical and depressing environment, as if looking into a strange an unfamiliar environment. The props bring out the fantastical theme. 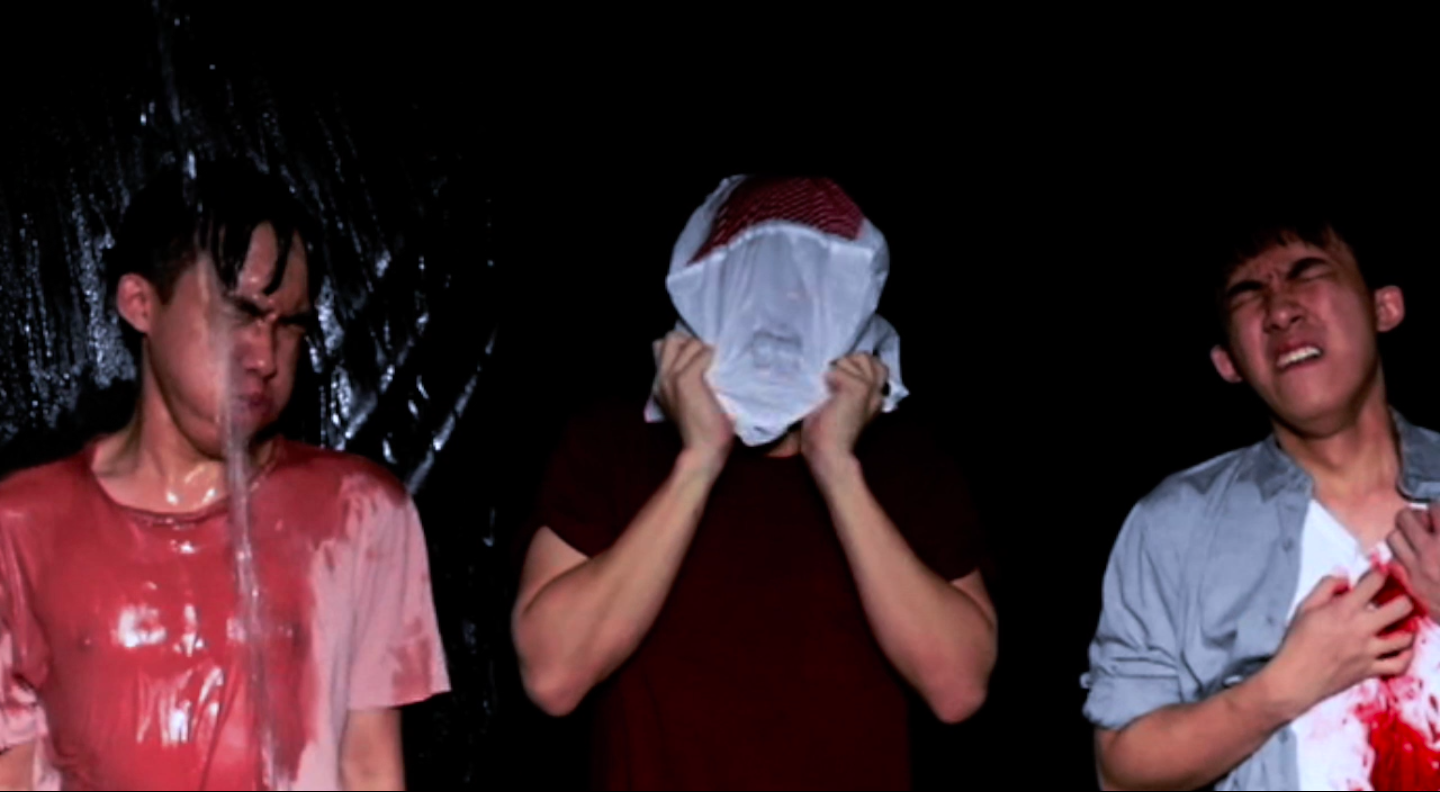 The actors also acted upon the theme and narrative of the video, understanding the reason of the slow motion was to enhance the visuals in showing the micro-expression of grief. Micro-expressions could reveal itself in the tiniest form, as the name suggests, such as biting ones lips or shielding one’s eyes due to sudden inertia.

Before the shoot itself, the actors were also introduced to a series of sad videos revolving around mortality and distancing from loved ones to inculcate a sense of depression, adding a depth to the performance.

Sound was one of the main component of this assignment, and the usage of sound must be at its optimum to bring out the thrilling momentum required in this narrative. As shown in the screenshots below, I tried to build momentum by increasing volume and the overlay of sound gradually. The first scene of the video sets in with only the buzzing of the morgue, but gradually builds up to the intense second last scene where three people are screaming among the seven layers of metal clanging. There was also the play of heavy and elongated sound from the slow motion bits.

The clip shown below is a recording of metal lockers being knocked on, mimicking the metal trays in morgue. It was later sped up to create tension.

Recordings of weeping was also carried out, but it was not used in the actual video. 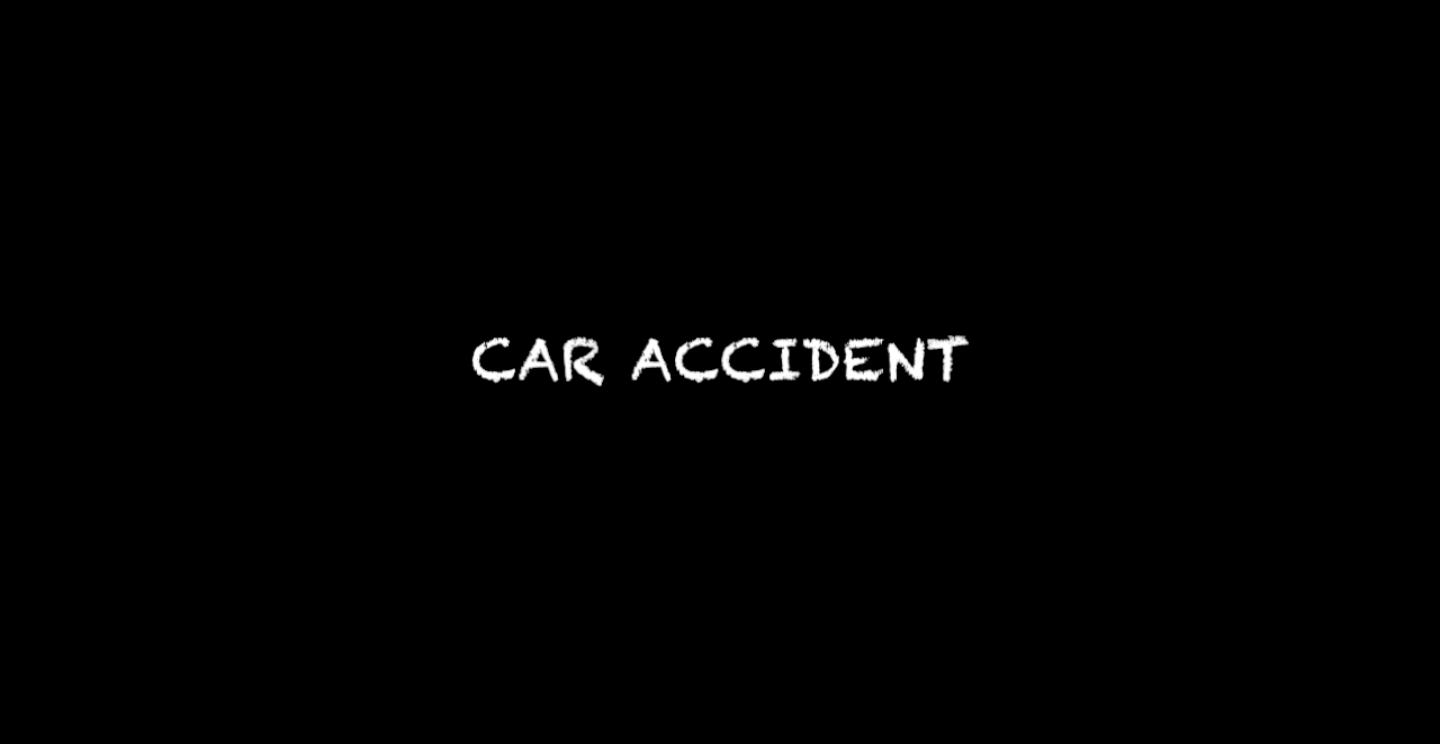 The car accident phrased ending was also taken out after critique as the presence of a worded direction limits the possibility of the narrative.