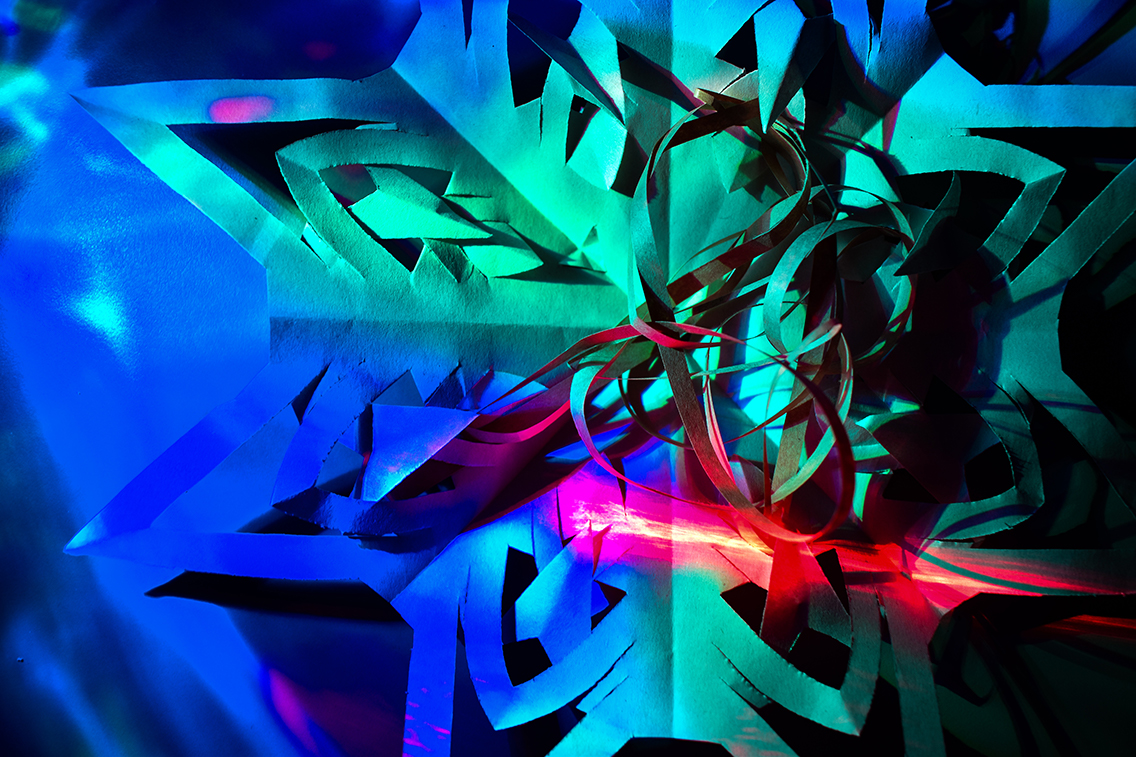 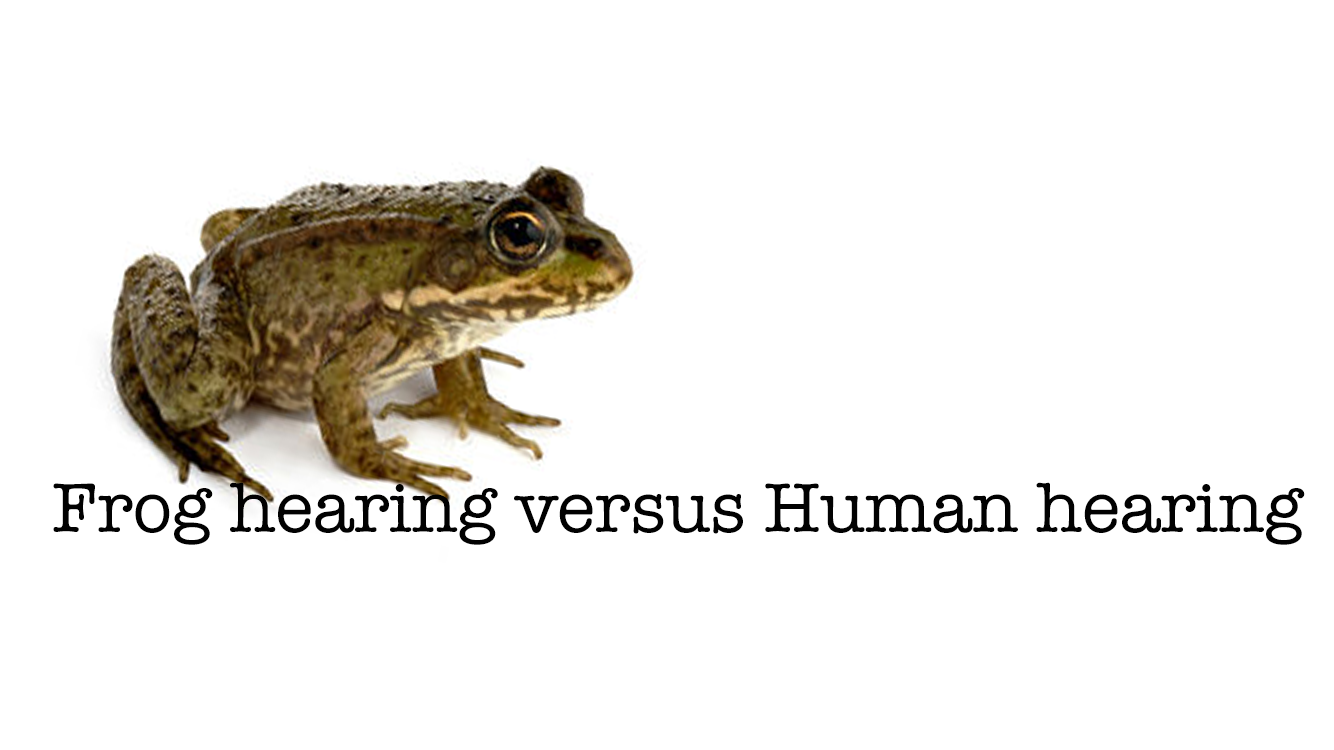 Researching on how frogs and humans hear, I realised that there is a great deal of similarities on how both auditory system function. Represented by the diagrams below, it is apparent that frogs do not have outside ears to direct the sound waves into the inner noggin, in comparison to the humans who have outside ears that act as funnels. However, both humans and frogs have central ears, inner ears and ear drums that carry out the hearing capabilities.

In scientific terms, humans have the outer ears, which is the pinna that acts as a funnel that tunnels the sound wave into the external auditory meatus (central ear), which then creates the sound in the tympanic membrane or ear drums. In comparison to the frogs, this organ is absent and auditorial function happens without it.

Saccades are rapid, ballistic movements of the eyes that abruptly change the point of fixation. They range in amplitude from the small movements made while reading, for example, to the much larger movements made while gazing around a room. Saccades can be elicited voluntarily, but occur reflexively whenever the eyes are open, even when fixated on a target.

Vestibulo-ocular movements stabilize the eyes relative to the external world, thus compensating for head movements. These reflex responses prevent visual images from “slipping” on the surface of the retina as head position varies. The action of vestibulo-ocular movements can be appreciated by fixating an object and moving the head from side to side; the eyes automatically compensate for the head movement by moving the same distance but in the opposite direction, thus keeping the image of the object at more or less the same place on the retina. 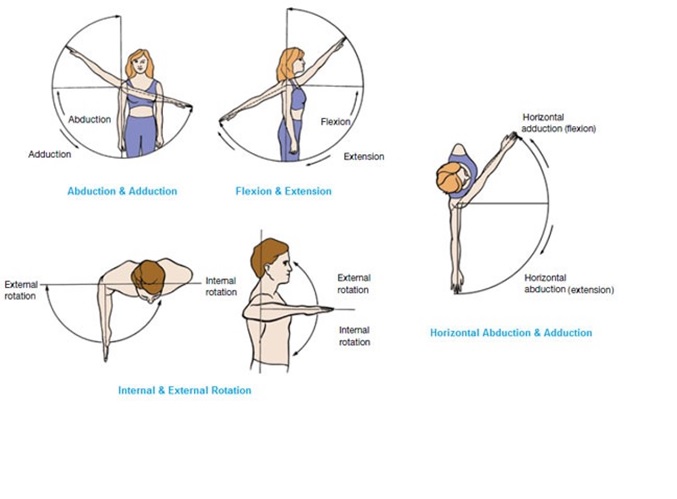 Kokopelli, the spirit of music, has arrived in the emptied out City of Voids est. 2017. Everywhere Koko went, accompanied magical melody that turned sound into organic matter. The dormant citizens of the city laid in awe as the sound they feared and loved transformed into beautiful sculptures, blossoming around the city

The shutter sound is beautiful to many people as it symbolised artistic creation. It is not a sudden screech with staccato rhythm. The sound ascends the moment the shutter clicks, and descends once the photograph is shot. The rhythm is also not a full linear melody, with voids in between each shutter, displaying melodious positive and negative space.  This ascending and descending rhythm as well as negative spaces can be seen in the sound-wave.

The lift sound is horrendous as it is heavy and confusing. It has a deep sound that is very muffled, as if a monster roaring out continuously. It has a solid punch with each vibration visualised as a curve shaking on its own. The vibration and solid composition can be seen in the sound-wave.

With the presence of Koko, the film projector and lift merged into an organic form that could be physically touched by the citizens. It was otherworldly.

the citizens were in awe, and Koko explained the amalgamation.

The shutter can be seen as a composition that is positive, that ascends and descends in rhythm (but is likeable due to its symbolic value of artistic creation), depicted by the sharp edges of the tips. It is a sharp sound that has sequential negative voids amidst each shutter clicks, shown in the negative space on the paper. 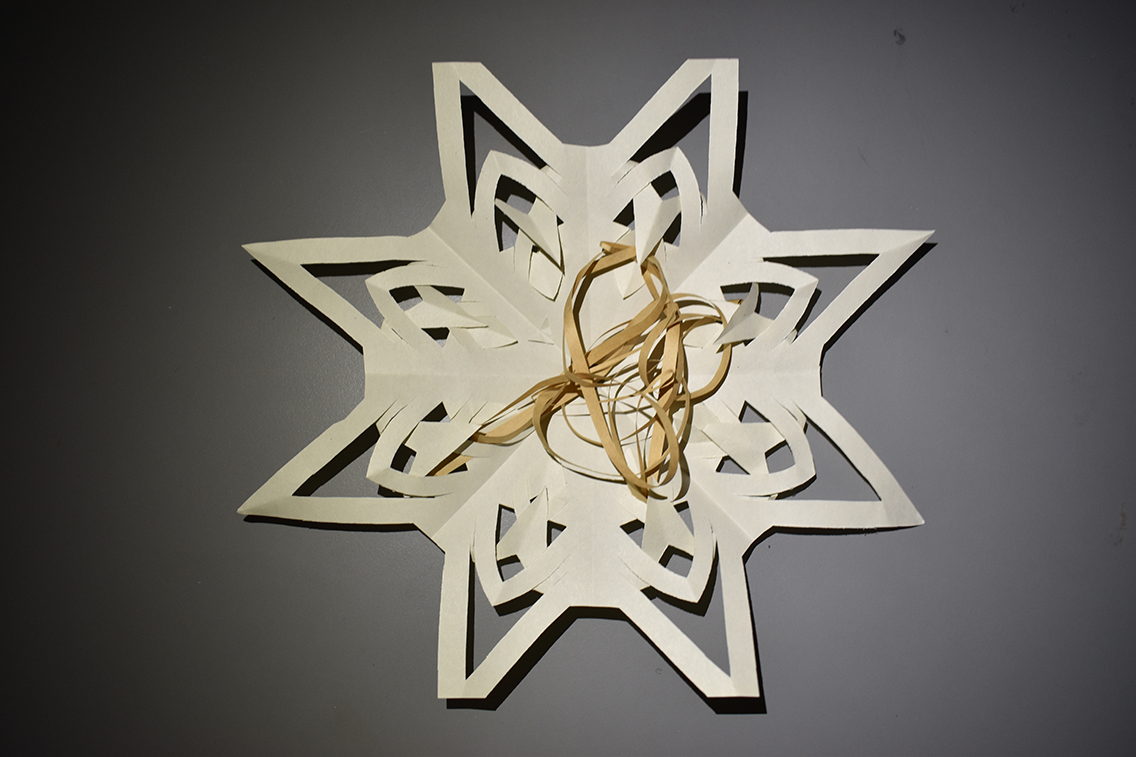 Reference to body part and movement

The eye allows light to enter since it is translucent. It has lids that open and close, becoming a barrier at times, but sometimes clear as day. This motion of barrier is sometimes slow, sometimes fast, frequent and even random. The micro-movement extends to how the pupil dilates and contract, something we can feel but not see. There could be controlled and uncontrolled actions, how an eye blink to wash away dust, and how an eye blink because it senses an imminent threat of fight or flight.

The radial composition references to the way the eyes function, with a circular system that funnels light into the iris that allows the eyes to work. There is a strong sense of direction into the center that brings out that idea. The sound of shutter also reminds me of the blinking of eyelids. The central twirl of paper reminds me of the decentralised veins of the iris. The eye is also a translucent organ that uses light to function, hence, the design is filled with holes to allow light to pass though. The design below looks like an otherworldly door of sorts, with many opening that utilises light. It accentuates the subtlety of how light interacts with the eye, creating micro-movement of blinking or dilating. The central twirls depicts the micro-movement of the complex rigidity of the pupil, dilating and contracting.

The composition of the lift is as explained, muffled and the vibration of the sound can almost be physically felt. It is also a strong sound with deep base. Hence, I made it into a twirling ball of curved paper that is intertwining. The action of shining a light onto the curves gives off a strong and dark mass onto the base that heightens the sense of depth, like the lift’s sound, shown above. This was because the light creates a strong contrast of shadows below the twirls.

Muse: I find the word “muse” relatable to my sound fabric as the concept and structure of my sound fabric originates from the ideation of the shutter. I found it inspiring especially with the meaning behind the shutter of a camera, symbolic of artistic creation.

Porosity: The word “porosity” is relatable especially because of the majority usage of holes and negative space. I used holes in this sound fabric to create the staccato rhythm in the sound fabric.

Kokopelli: The word “Kokopelli” relates to my sound fabric as I wanted the final product to be geometric and mystical in nature, in tune with my perspective of Kokopelli as an entity. The slightly curved geometry of the stars seems mystical, especially with the curved and overlapping negative space in between. The geometry is half-artificial and half-terrestrial.