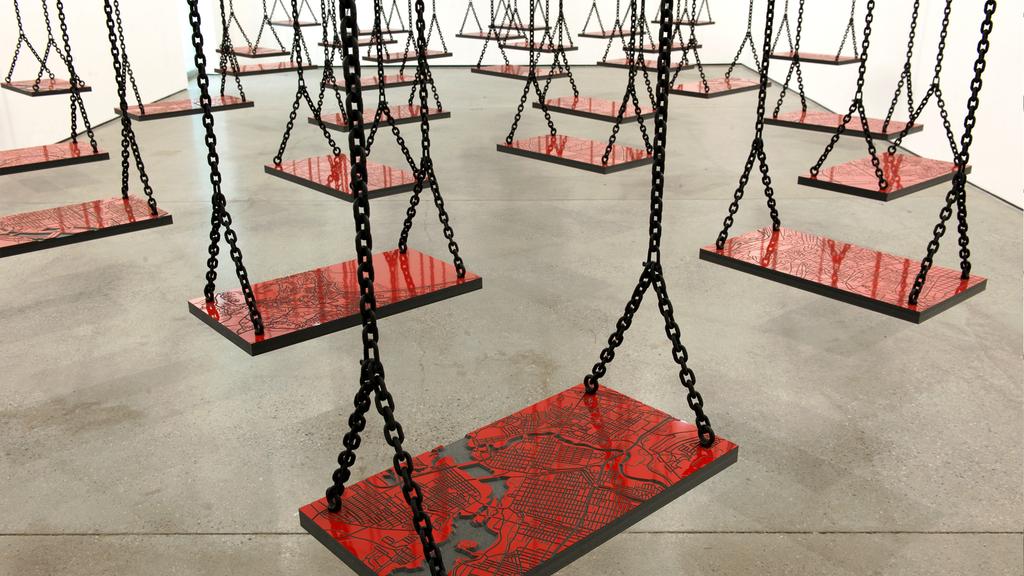 As we venture into the last assignment under 4D, we begin our investigation with time and space. This trait opens up the arena of art-making onto installations, kinetic sculptures and even performance art. We applied what we learnt from the previous lecture held by Lei and sieved out a few artworks that we enjoyed, paralleling its pros and cons.

Gabriel Orozco is a Mexican artist who is fond of a wide genres of art, ranging from installations to photography to sculptures. He is a Conceptualist, juxtaposing the artistic traditions of his birth place to values he learnt from found object artists like Marcel Duchamp. In doing so, he extract everyday objects from their supposed environment and focuses on the fragile relationship it has to society. This can be seen in many works, such as Cinco Problemas (Five Problems) 1992, where he placed five potatoes on five different notebooks in a stationery store.

Orozco’s work may seem banal at first glance, but it always requires a second look or more. It harps on the idea that the audience would need to look at the work for an extended period of time, and gradually realising the intentions of the work. It is the simplicity of the aesthetics that creates a dramatic realisation of the themes, which can extend to ideas like mortality and the human existence. In Lintels 2001, Orozco hung up dried and torn lintels from the laundromat after the events of the September 11 terrorist attack. This work shows the tiniest strands of human hair and dust, hinting to the audience the idea of mortality in a subtle way. The audience question the origin of the torn fabric, whether the owners survived the attack or they are left because the owners have bought new clothes. The fragility of human lives is shown without the actual depiction of human blood, becoming a silent yet morbid approach. Furthermore, Orozco’s work dwell on the simplicity, telling the audience that introspection does not require a heavy aesthetics, even the simplest composition can produce the same effects.

Mona Hatoum is a Palestinian artist who explores greatly with video and installation art. She is known to explore on themes of war and immigration given her exile from her home country. She is a Conceptualist who dwells on the fine line between visual and meaning, often using the visual characteristics of found object to intensify the meaning of her works. In works like Daybed, Hatoum uses the jarring visuals of a cheese grater and juxtapose these traits onto a bed, and created the eerie sculpture of the Daybed. It is inviting in a sense where it resembles a bench or a bed, drawing in audience to want to lie on it. However, as audience comes closer, the grating holes are apparent and it repels the audience thinking of the impending dangers of touching it.

In + and -, Hatoum used a toothed metal arm and rotated it on a circular bed of sand, with exception that one side of the radius is covered with teeth while the other has a clean line. In doing so, one semicircle will have thin lines drawn on it as the metal arm moved while the other side gets constantly covered as the clean metal arm wipes over it, shown in the video below.

This artworks talks about the idea of displacement, a strong commentary by Hatoum since she was exiled from her home. The perpetual loop of making marks and cleaning it up speaks heavily of the problem from the displacement of war. It speaks of how war destroys the life of many people even as the try to rebuild said life, destruction happens all over again.

Time as an element

In both works, time is an important feature as it affects the outcome of the understanding by the audience.

In Lintels, the aspect of time is in the literal present, where the audience will have the take time in the specific space to understand the meaning of the artwork. They may be shunned from the work initially due to its banality and therefore misinterpret the artwork. The time aspect stems from the linear timeline that begins once the audience walk into the installation. Hence, as time progresses, the understanding and introspection of the artwork would set in, be it right or wrong.

In + and -, the aspect of time is metaphorical, where the audience will have to reference the kinetic sculpture’s perpeptual loop of time to Hatoum’s commentary of displaced war refugees. The sculpture loops continuously, meaning an infinite loop where one cannot get out of, such as the disasters of war that refugees are stuck in. The time aspect is circular in nature, a harsh commentary of a problem by depicting it as never ending.

Furthermore in both artworks, the aspect of time could be similarly interpreted in the way where it is symbolic in nature. This refers to the events that the work serve to remind and pay homage to. In Lintels, it represents the event of September 11, whereas in + and -, it is the event of Hatoum being displaced from her home country.

All in all, time is a versatile measure that can be depicted in a variety of manner, be it in a linear form, edited form or circular form. It is a psychological understanding towards the changing environment, and if utilised correctly, could change the meaning of an artwork completely.