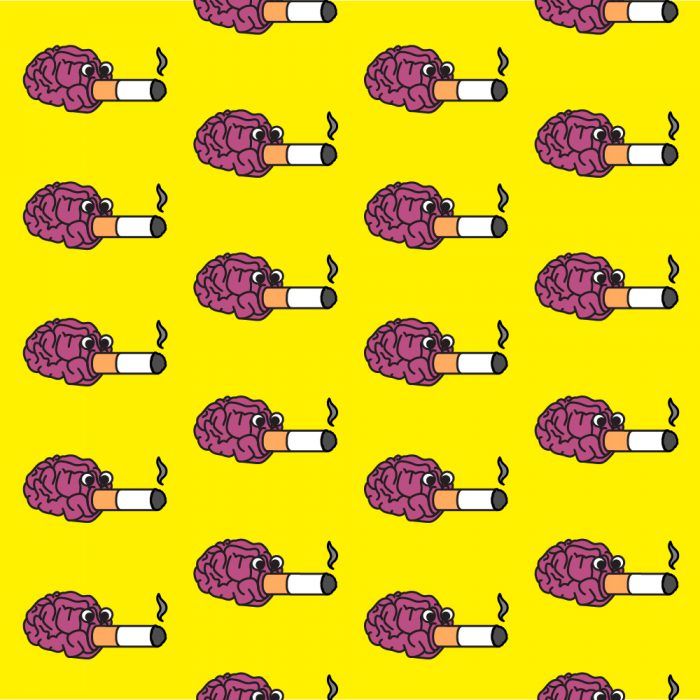 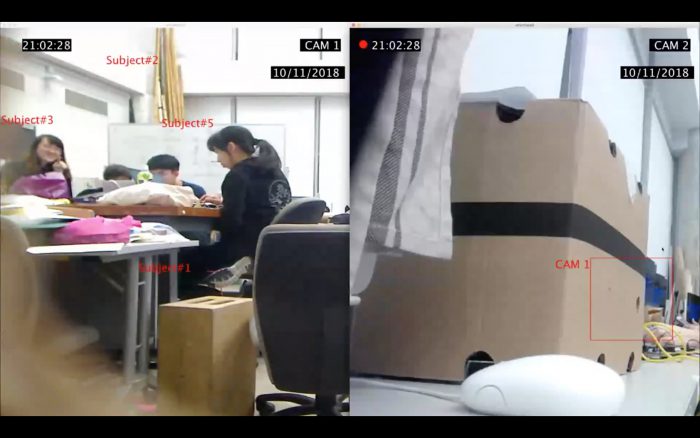 What is privacy and how aware are you of your own privacy? Do you have any awareness when you are under surveillance?This live installation consists of footage taken from a location where passer-bys are not aware that they …See more

My project is a live video-based installation which aims to question the meaning of privacy and security in this Internet age, with regards to public surveillance. Viewers of my livestream become inadvertent voyeurs as they view live footage of the “subjects” of my stream, who are unaware that their presence in the space is being recorded.

The installation aims to question: who has the right to surveillance? Does being in a public space mean that rightfully we can be placed under watch? And if yes, what would such a society be like and who gets the right to sit behind the lens and watch? 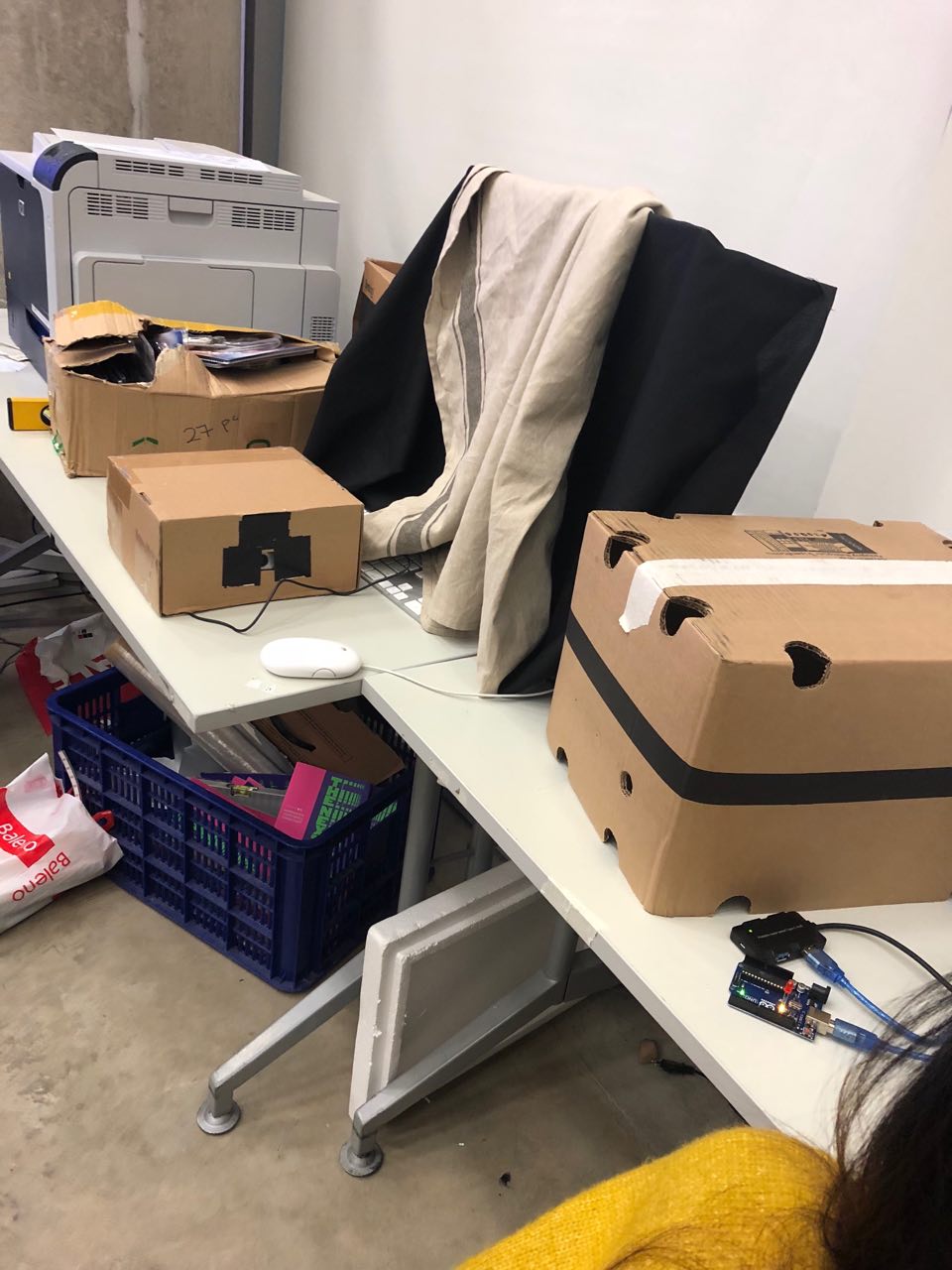 In this installation, I used 2 webcams, Cam 1 and Cam 2, connected to a computer to feed live footage of a location (IM Lab) onto my livestream. Both cameras were concealed within boxes and labelled “DO NOT TOUCH” in order that the people around it would be unaware that it was containing a camera. Cam 1 was taking in footage of the IM Lab while Cam 2 was focusing on just Cam 1, with a red square labelled “CAM 1” superimposed onto the footage. The webcams were connected to an iMac in the room (which was then covered with cloth to prevent people from tampering with it) and using code via Processing, I was able to add face recognition to the live footage which highlighted people’s faces with a red square as well as assigned them with an ID number. I also used Processing to add a live timestamp as well as the date and camera name and a flashing red circle in order to give it a CCTV footage look. 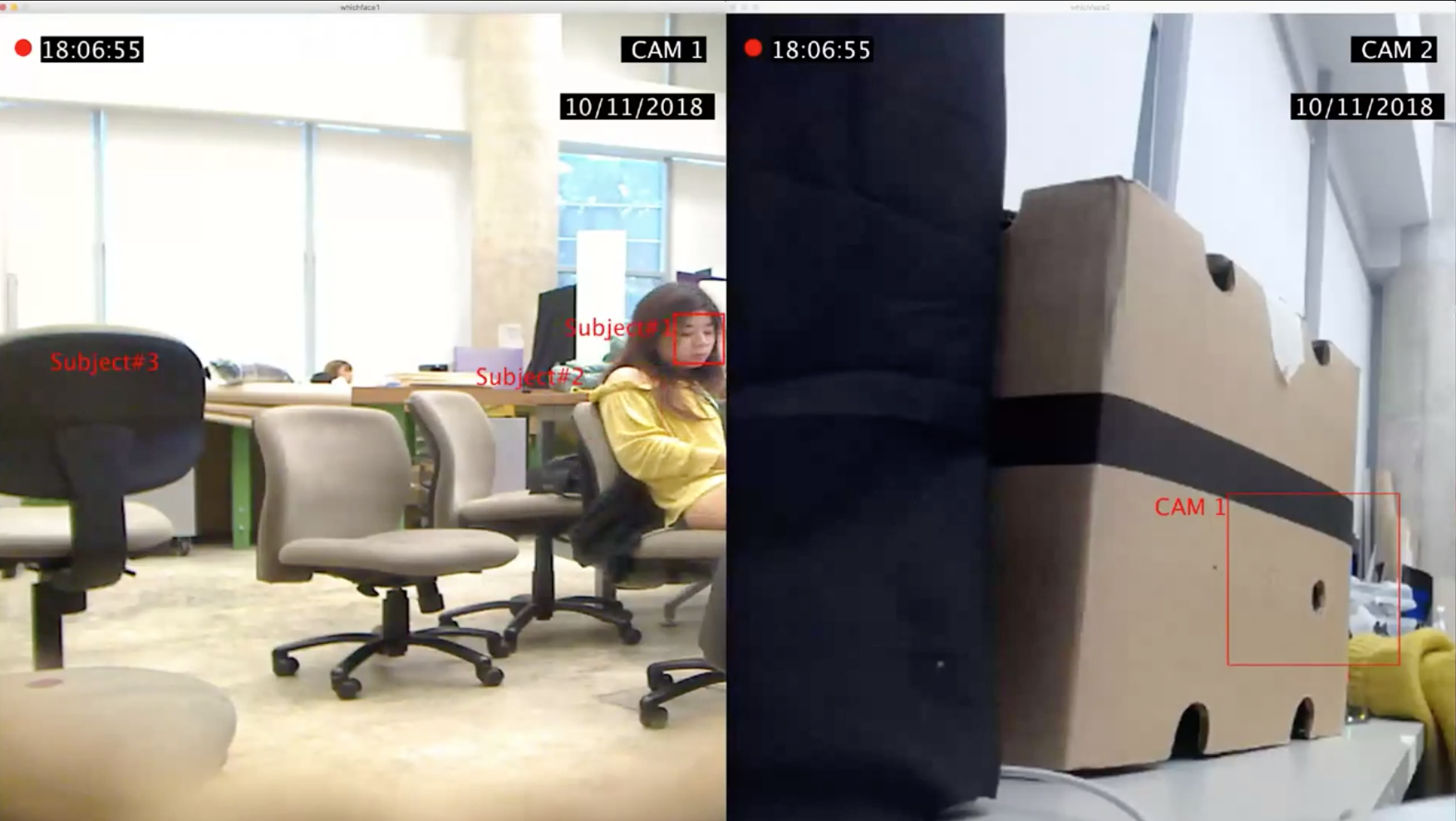 The two footages were presented side by side on the live stream allowing viewers to look at the scene inside the IM Lab while being aware that the camera was being placed in such a way that the passers-by would not notice the camera’s presence. This was done so that viewers of the livestream would be aware of the installation’s voyeuristic nature, highlighting its disturbing nature and raising questions on whether such a setup is ethical.

The concept behind the installation is referenced from “The House that Spied on Me” by Surya Mattu and Kashmir Hill. When reading the article, what resonated with me was how Hill was unaware of the amount of information based off her usage that her smart devices were sending out. The sentiments of the article resonates with my own research on CCTV devices and IP cameras as shared in part 1 of the hyperessay, and how a lot of our personal data which we assume to be private is in fact very easily accessible or made public. Like the article, my installation is not an outcry against public surveillance and smart technology but rather aims to reveal and discuss about an eerie side of the subject; if we do not make proper precautions with our devices, then our privacy is not in our own hands. 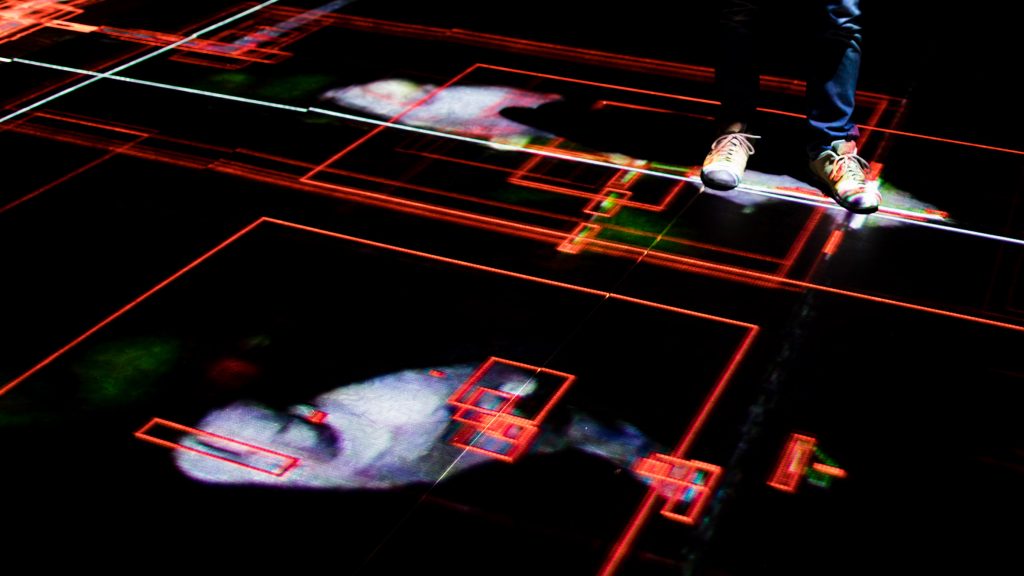 Visually and conceptually, my project was also highly inspired by the installation Hansel and Gretel by Ai Weiwei and Herzog & de Meuron. For me, the red squares highlighting the facial recognition was important as it was a key point in my installation to highlight to viewers that the subject they are viewing are in fact people, and that the technology we have is proficient enough to detect them as such.

For me, this project was not just an installation but also a form of social experiment. The topic of privacy and surveillance is one I intend to continue researching on exploring on, hence this project was a kind of way for me to gauge what people’s reactions would be to both having their privacy invaded and also inadvertently invading someone else’s privacy.

The decision to film in the IM lab was a last minute one but I am glad to have done so. I felt that because the people watching my livestream would mostly be my peers from my year, it would be more impactful if the subjects of the livestream were people who they knew and recognised. I also chose to not inform my classmates that I would be doing my stream 1 day earlier than originally stated, as we had a lesson in the IM Lab at the time of my stream and I wanted to capture them unaware in the video. My final stream spanned 4 hours, spanning part of our lesson and the year 2’s lesson after that. 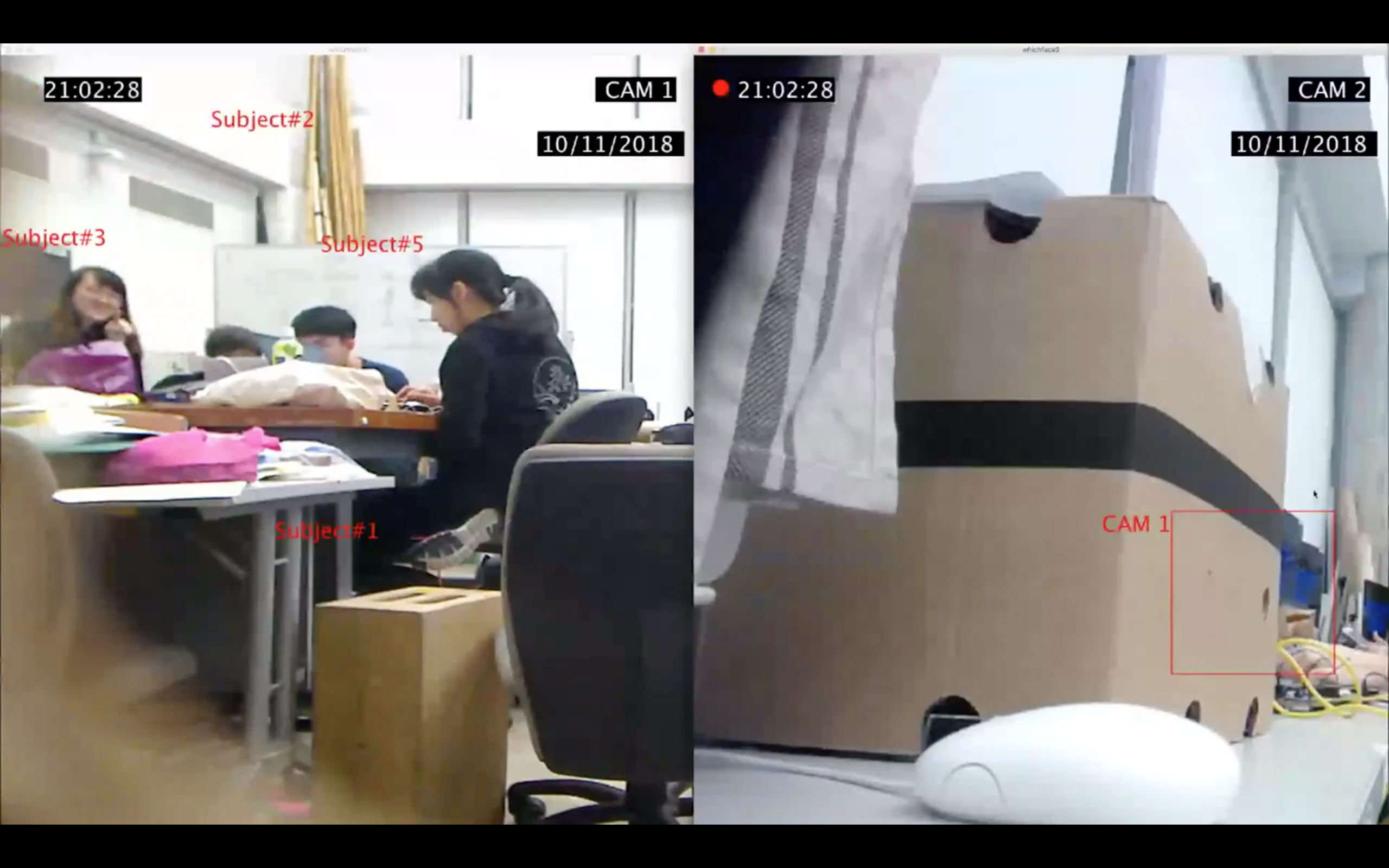 The moment where they realised. Spot Yueling pointing at the camera!

One of the highlights of the stream was that one of my viewers, Jake (who is in the US), recognised the subjects of the stream (Year 2s) and tagged them in the comments. Although initially my intention was that the subjects should not know that they are under watch, I’m actually glad they did as it added an extra layer of interaction that I did not expect to have. It is really a testament to the power of social media and how it connects and alerts people to everything going on. The subjects seemed to find it amusing that they had been recorded the entire time, and some of them even shared it on their own social media as seen above. The excitement wore off shortly after and they went back to their normal activities which I think says a lot about how people these days don’t give much thought about being under surveillance. I managed to interview some of the subjects afterwards and find out how they were feeling when they discovered the livestream.

“I felt slightly disturbed and conscious about my actions afterwards.”

“I can wave and I can see myself and that’s cool…I was just surprised and I was just thinking about what can I do next.”

As for viewers of my stream, there was a mix of reactions. A lot of them didn’t understand what was happening but found it quite creepy to be “spying” on unaware people. Others found it amusing and used my installation to its full voyeuristic purposes.

An example of voyeuristic use of the livestream

Relation to Internet Art and Culture

I’m personally really happy with how the installation/social experiment/livestream turned out. Before this I had some anxiety about how it would turn out as it might seem boring or confusing to others, but I decided to treat it as an experience for myself to learn more about privacy and surveillance and people’s views towards it. I found that even just my telling my peers about my project was a very insightful experience as many of them shared their views about the topic with me. It is a really good first step into my foray with the topic of privacy and surveillance and I’m excited to do and learn more.

Another thing which worried me at first was the issues involved with the technology used in my project. The code for the face recognition was initially quite buggy and it took me a long time to fix it. Even when I did the installation it still wasn’t perfect but after setting up I realised it didn’t really matter as the installation was still working well enough to be able to get the point across.

One thing I would have liked to do was to have worked with IP cameras instead of webcam which is constrained to being connected to a computer. The IP camera that I had wasn’t compatible with computer and I didn’t have time or money to get another one, so I had to make do. I think I would have much more organic and interesting results using an IP camera as it can be streamed remotely and concealed more efficiently.

I would definitely like to try this again or something similar, but in a more public space next time involving people outside of the ADM community. 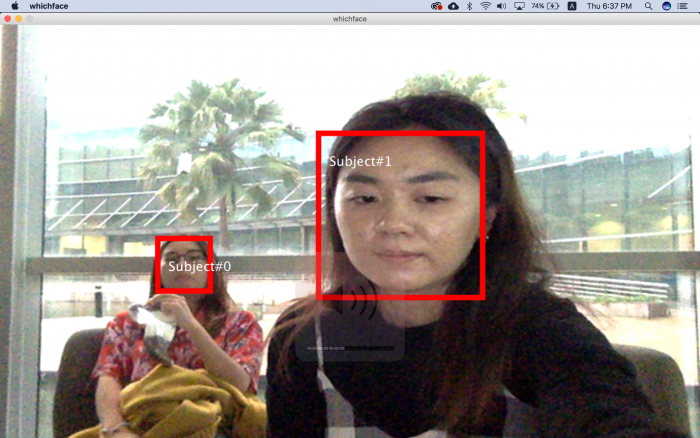