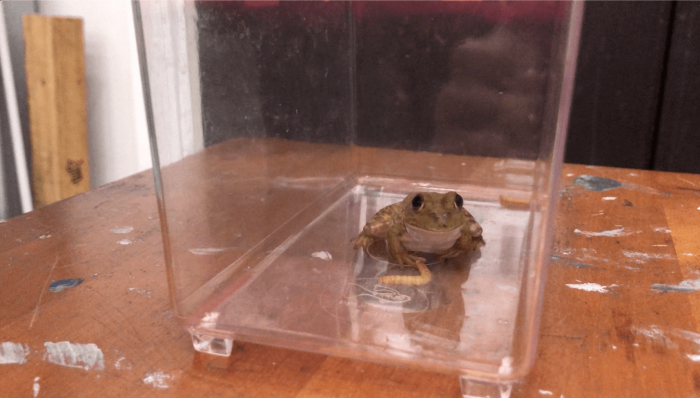 For this project, I am working with Chloe, Mavis and Viena. We decided to create a game as we feel that a game is the best way to engage people in artwork while making it fun at the same time. We decided to involve my pet frog Kwakwa in this exercise and make it a sort of feeding game where the audience tries to feed a worm to the frog!

In this game, the audience (2-4 people) is given a piece of plastic with a stick attached to each corner and holes in different spots on the plastic. A worm is then placed on the plastic and the 4 players must work together to get the worm into one of the holes and into the hole on top of the frog tank.

The game is pretty self explanatory after we tell them that they have to feed the worm to the frog, because certain parts of the experience will cue the audience into what they have to do for example having 4 sticks at each corner of the plastic indicates to them that they are supposed to hold each corner to play. One thing we noticed is that because this is a “game”, people tend to take the easy way out and just get the worm through the easiest hole which is the one in the middle. To rectify this maybe we could have done it in such a way that the holes further from the middle have more points to encourage the audience members to try out different ways of playing instead.