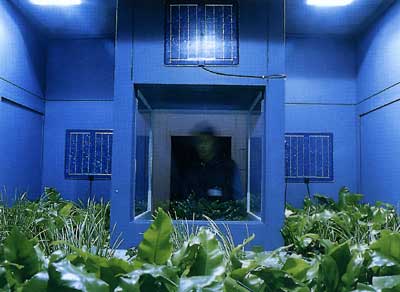 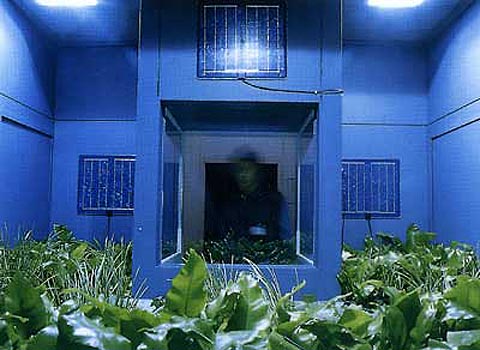 Erik Samakh is a contemporary artist who describes himself as a “hunter-gatherer” of images and sounds, which he has captured, recorded and exhibited for over 25 years in natural settings. His work is focused on our dialogue with nature through the combination of new technologies and natural elements. In the above installation which is one of his earlier works, Samakh encourages viewers to have “strange conversations” with frogs living in the installation’s habitat through the use of modules in the space which emit sounds to the frogs.

This is an audio-visual installation by Nonotak Studios. They are a studio which I have been a fan of for quite some time now and they are popular for doing layered projection as shown above. I found it very interesting because I feel that it just goes to show how by doing something as simple as layering different semi-transparent screens, you can create an effect that looks polished and interesting. I think it is important to know that while in this day and age it feels like to create an interesting and exciting artwork we as artists have to learn all kinds of difficult software and latest gadgets, actually we can just use the simplest of analog methods to create something that is equally impressive.

I was interested in how Nonotak managed to do such a project so I did a similar mini-prototype of something like that one day! I used a mini projector and some PVC pieces coated in matte spray to make it slightly translucent. The effect is pretty interesting and if it is more refined I think it could look really good. Looking forward to doing more testing on similar methods in the future!