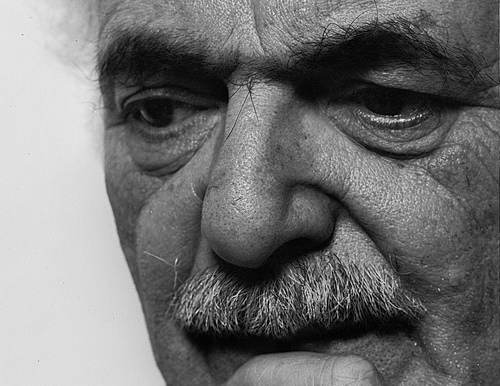 in collaboration with Dan and Jacob

Who is John Coplans?

‣ Moved to USA in 1960 to teach in University of California, Berkeley
‣ Took his first photographs in 1941 in Ethiopia while he was still in the army
‣ Started on his world-famous Black & White photographs of his own body in 1984
‣ Challenges the ageist norm & beauty standards in Western Culture

“The principal thing is the question of how our culture views age: that old is ugly.”

This is a black and white photograph of the artist’s feet, greatly enlarged. The image is tightly cropped at the ankles to emphasise the narrow space between the arches of the feet. A line of tiny scabs on the left foot appear as a surface pattern. Strong contrasts between light and dark in the photograph contribute to its visual impact.

Touching at the joints of the big toes, the feet are flexed so that the toes remain on the ground while the heels are raised. Like two massive columns, he captures his two feet as he draws them close and raises them to put his weight on his toes. It is a candid document of an older man’s feet that reveals the wrinkles, veining, rough skin, vertical scab, small tuffs of hair, and the thick, somewhat discolored and jaggedly cut or picked toenails. Coplans presents his feet as they are, with no apologies for how unsightly they might strike the viewer. Yet, if we are drawn to them, why?

“I have the feeling that I’m alive, I have a body. I’m seventy years old, and generally bodies of seventy-year-old men look somewhat like mine. It’s a neglected subject matter.”

Taking the series as a whole, Coplans tracks his body as it ages. In an age that prizes the beauty of youth, he makes himself vulnerable as he divulges a less-than-ideal — but very human — body. If because of our culture we sometimes deny the physical realities of our bodies and aging, Coplans embraces them. In exposing himself, he exposes us all to the fragilities of our physical selves. Perhaps he asks us to remember the brevity of life and to treasure who we really are, physically and spiritually.

Self-Portrait (Back with Arms Above) 1984

This is a black and white photograph of the artist’s back and hands in a bizarre appearance. Coplans’s back extends upwards in a solid rectangle, above which protrude two unexpectedly small, clenched fists. Curling himself round over his chest and belly, the artist hunched his shoulders inwards and bent his head down forwards so that it disappears. This gives the photograph a surreal atmosphere as the more you look at it, the more you would diverge from the idea that it is, in fact, a back.

In this photograph, Coplans concentrates more on the image’s formal composition rather than on the content. Coplans plays with the viewers’ conventional idea of a body, offering a humorous and unusual representation of it.

“So I’m using my body and saying, even though it’s a seventy-year-old body, I can make it extremely interesting. That keeps me alive and gives me vitality.”

Another thing that this image might be trying to depict is a contrast between what the image looks like and what the object actually is. The irregular rectangular shape of the back symbolises a boulder, something that is strong and hard to break through; while the object itself – that is Coplans’ body – is old and crippled. This shows that even if his body is fragile, Coplans is still able to portray the complete opposite of it as something unbreakable.

Images: Coplans | Gallery | Feet Frontal | Back with Arms Above