Typography as a self-expression 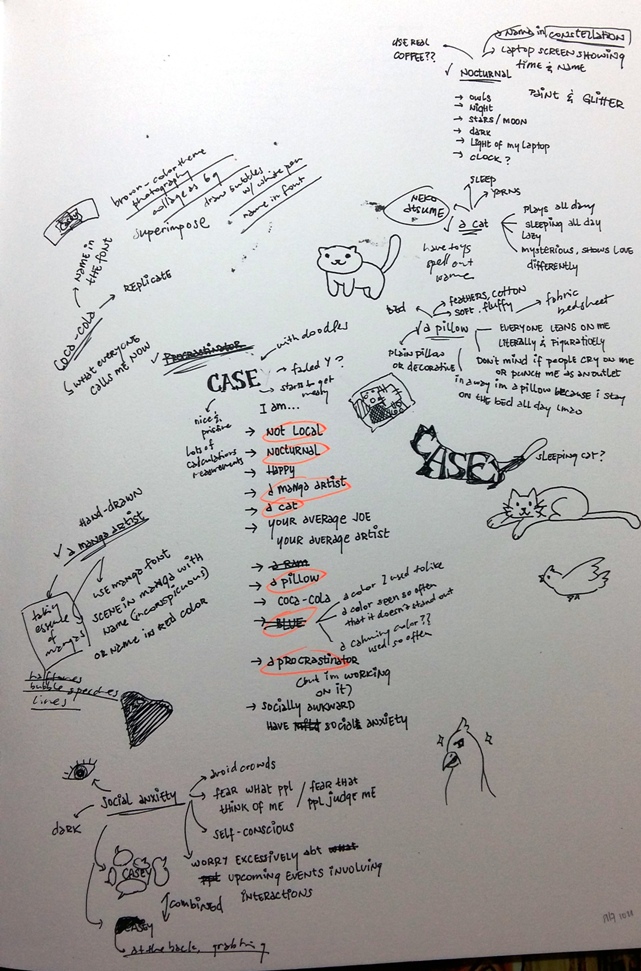 I AM A PROCRASTINATOR

The word says it all. I am a perfectionist, and our kind tend to put off our work if we don’t have a clear idea… because we’re scared of failing. I’m trying my best to work on it (because really, it does more harm than good) but somehow there are just assignments where I end up doing last minute.

I liked the idea of having an unfinished piece of work because I simply “ran out of time” from all the procrastinating, or “didn’t have the motivation” to finish at all.

The concept is that going from left to right, less attention to detail and quality is put into the letters. In the beginning I measured the letter sizes and spaces with precision, down to carefully lining them; but as it goes on, I ditched my ruler and started estimating instead, lining them sloppily as well. The ‘y’ part of my name is also not lined to give the effect of procrastination. (Some people call me Case as a nickname anyway so it’s all good.)

The font I chose for this particular piece is a serif font, as it gives a sense of professionalism. I also left the measurements and guidelines unerased to show that I gave much thought to those details at first. 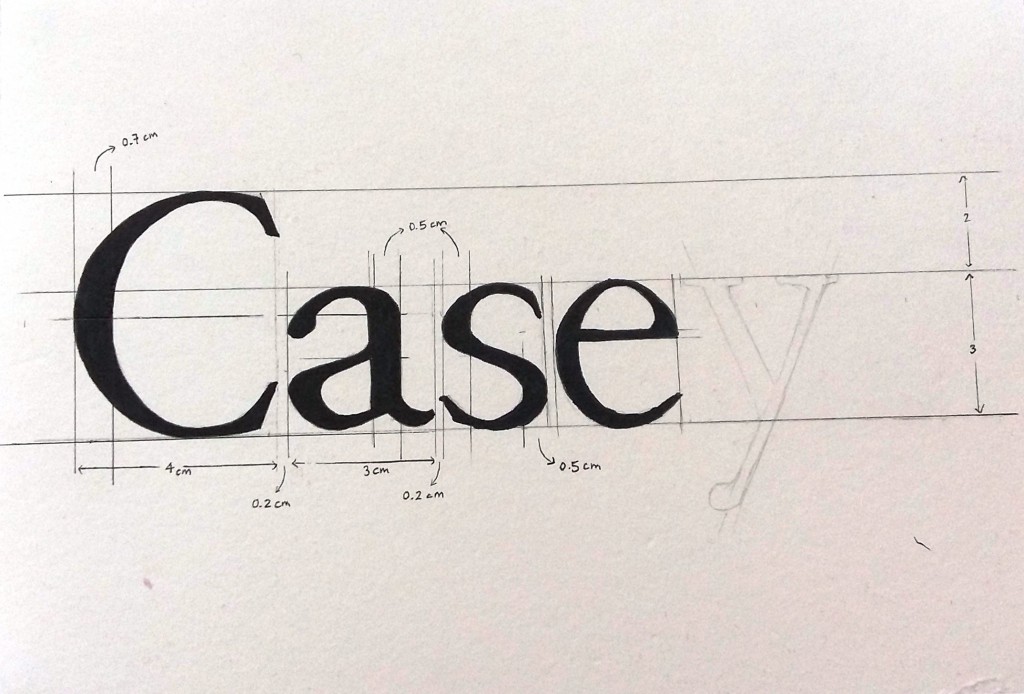 My rate of productivity is the highest at 9 pm to 3 am. And I tend to stay up as my friends from other parts of the world are usually online at those times. 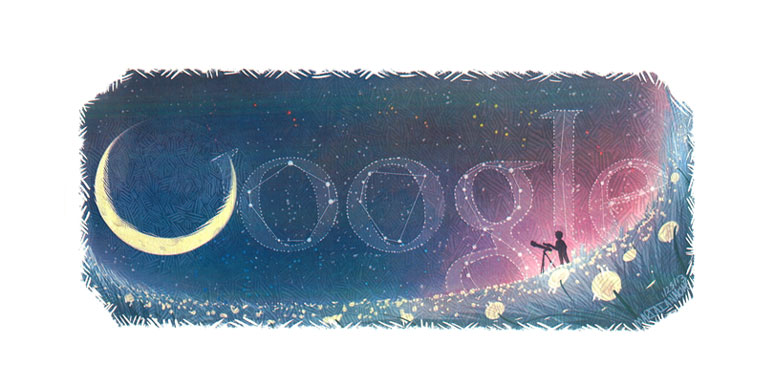 At first I thought of spelling out my name using star constellations (I like watching the stars!). I tried experimenting a bit with watercolor as the night sky and some white glue for the stars, but the glue dried up to transparency so that was a fail. I tried using yellow paint and white pen as well, but the result didn’t turn out the way I imagined it. 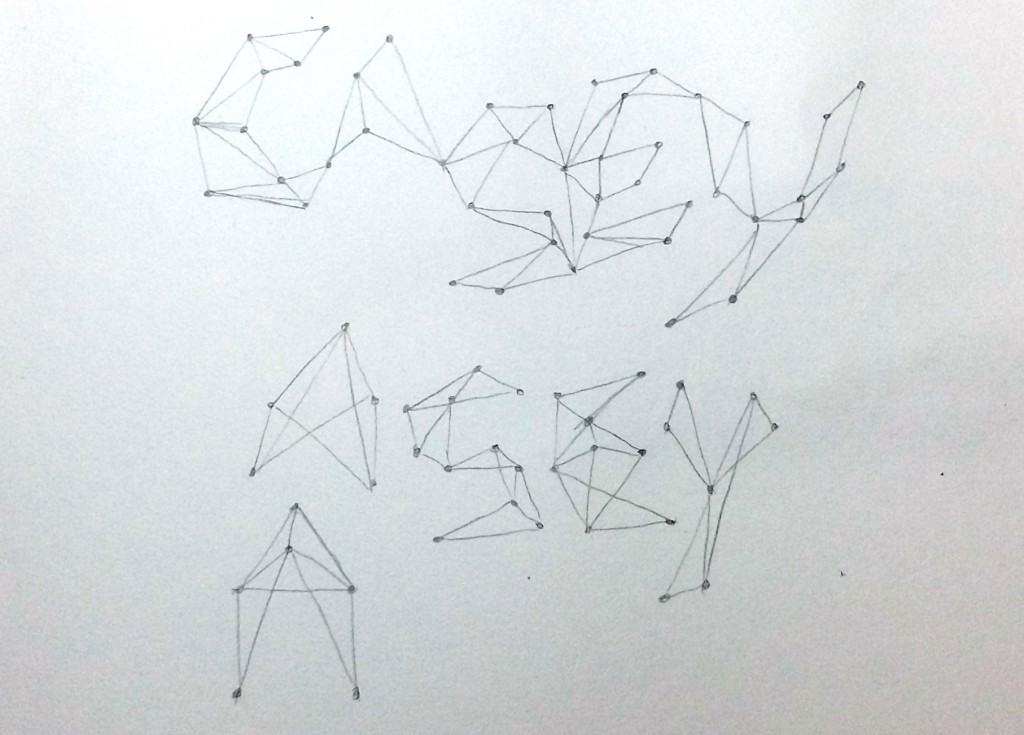 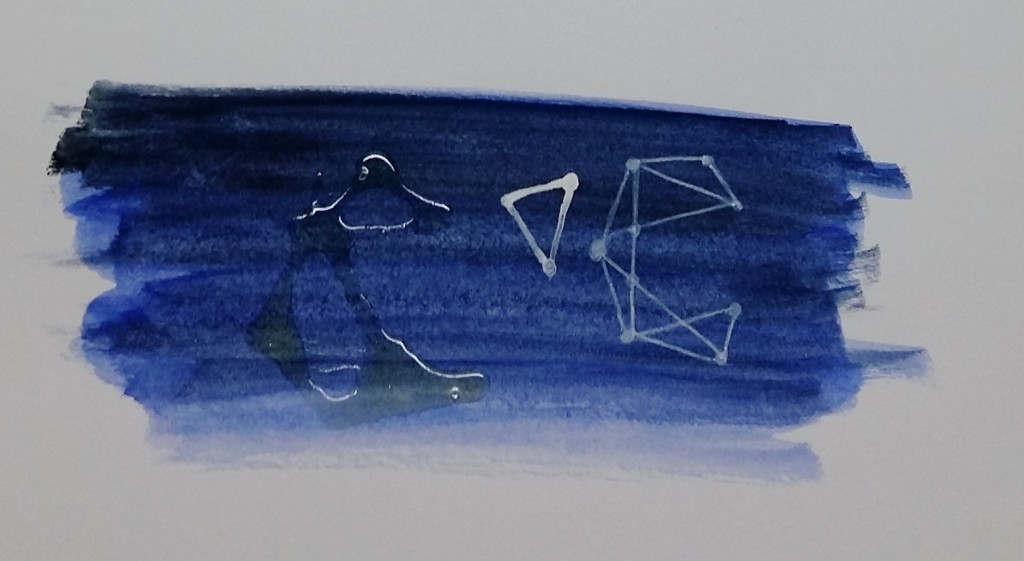 When you think about not sleeping at night, you would think of coffee. I came up with these rough drafts with pen first. The first box features star constellations again, but I thought that would be hard to do with coffee. The next two shows nocturnal creatures, a bat and raccoon respectively. 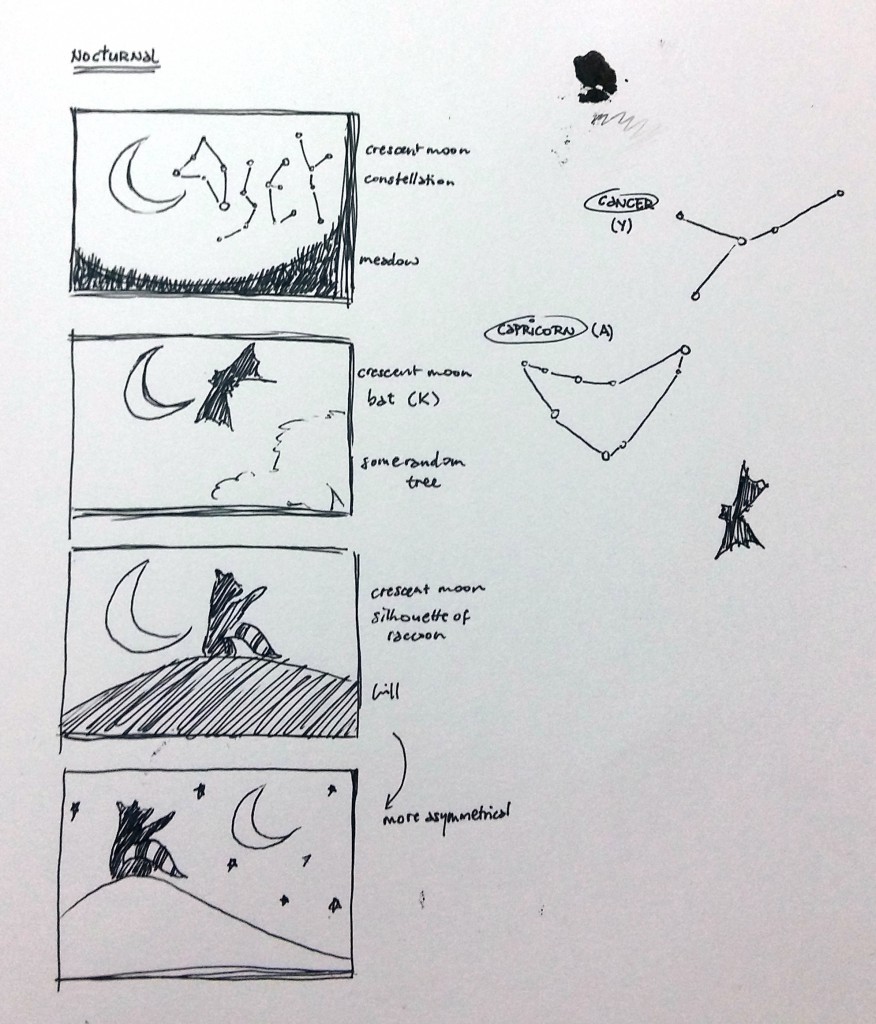 I experimented around with coffee mix at first, but the value produced is very mellow. Adding black ink helped a little, but upon looking at it again, the painting seemed unnatural. 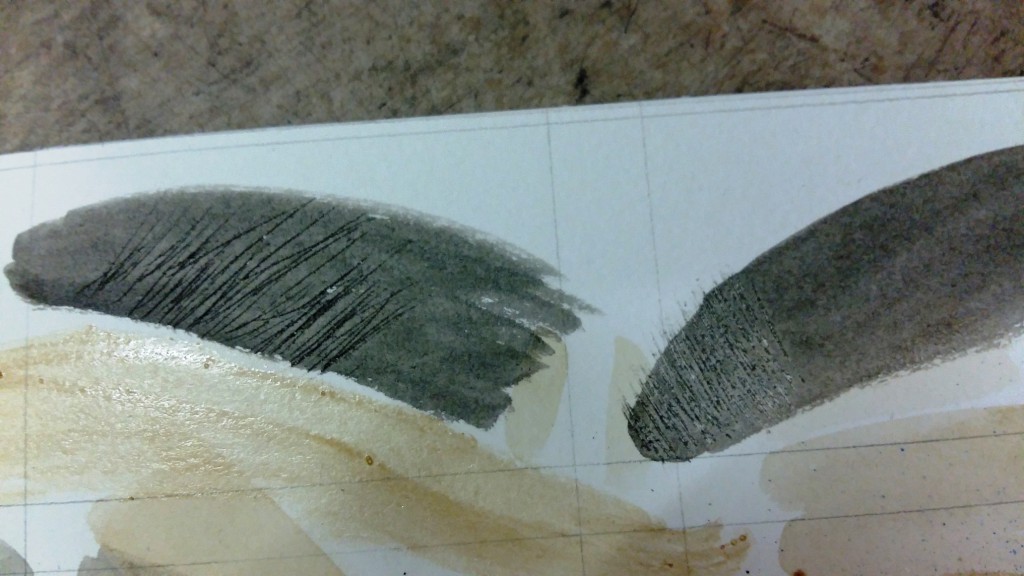 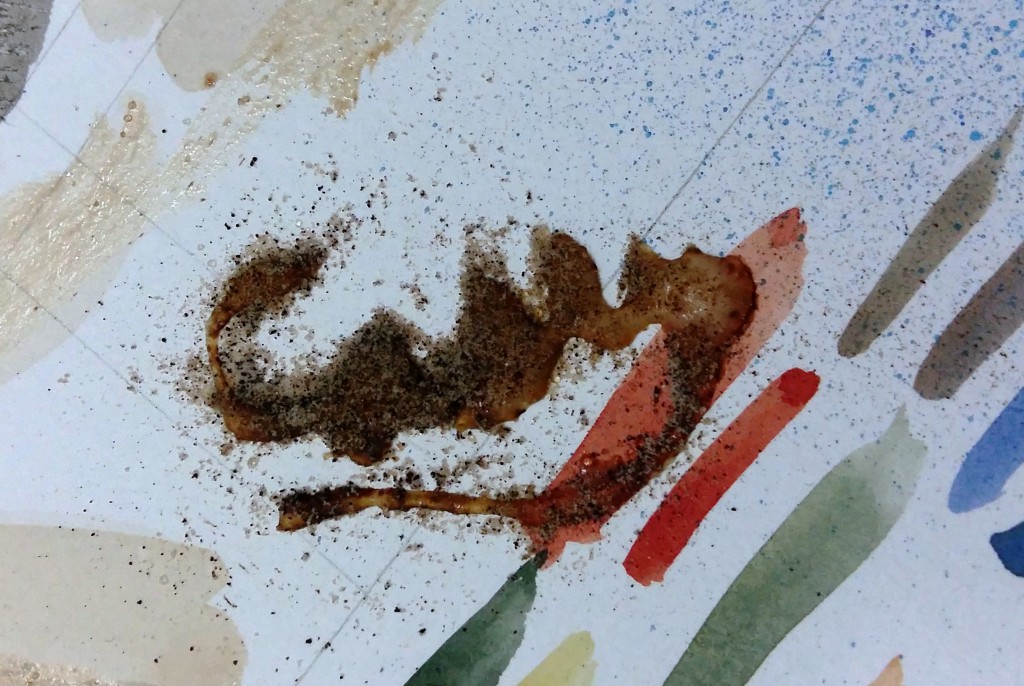 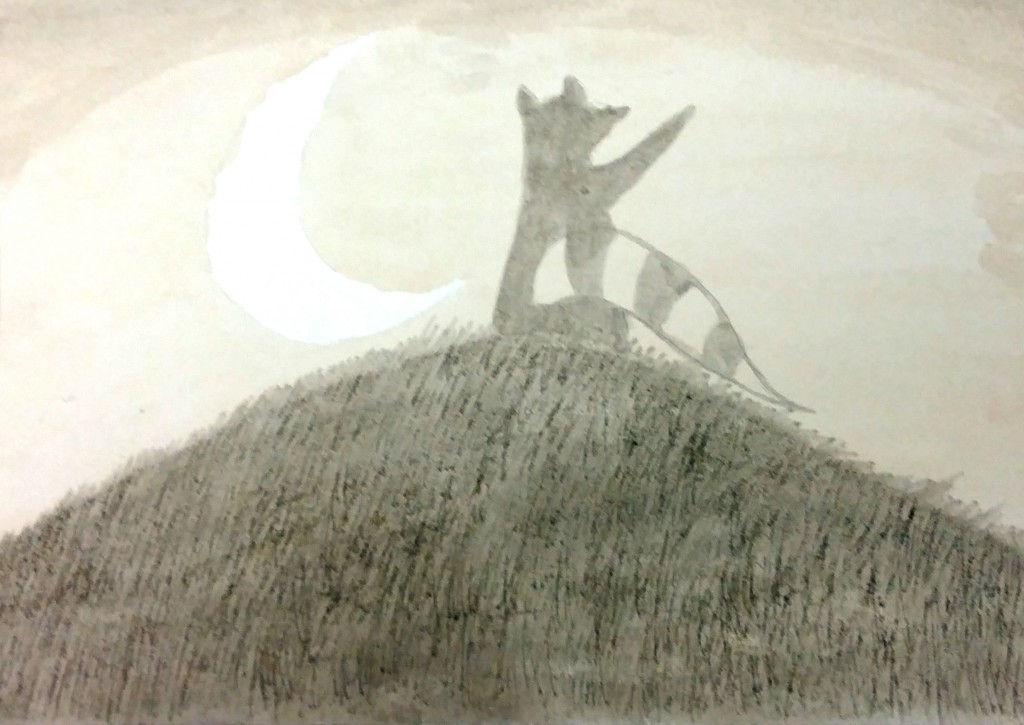 So I decided to use black coffee instead and the result was much better. I used the fourth box from my pen sketches above as it shows asymmetry in the overall drawing, as well as using the rule of thirds for the hill elevation. 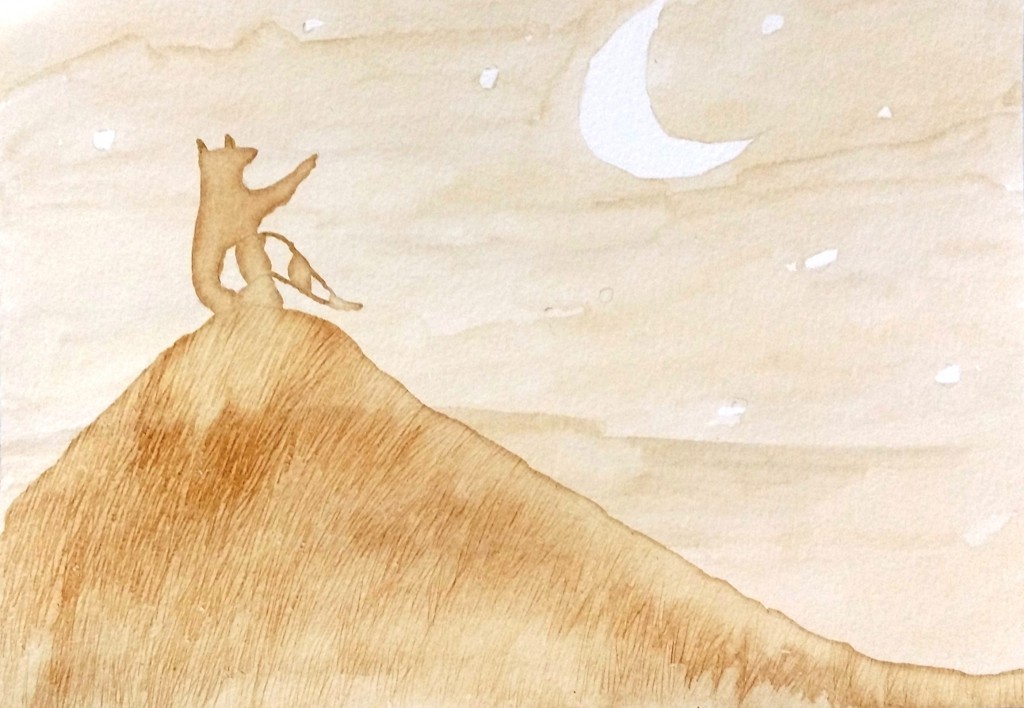 I AM A CAT

Cats love to laze around all day and sleep, and that is what I love as well. Another aspect about cats is that, unlike dogs, they rarely show their affection – so in a way I also resemble them as I don’t often give praises or tell people how I feel about them (but the feelings are there!) There is a famous game trending recently called Neko Atsume where you basically place cat food and toys in your backyard for stray cats to come and play. My initial idea was to make a model of these toys to spell out my name. For example one of the toys on the first image resembles a C, or arranging the different balls into another letter. But not a lot of people actually play this game so I decided to change my idea. 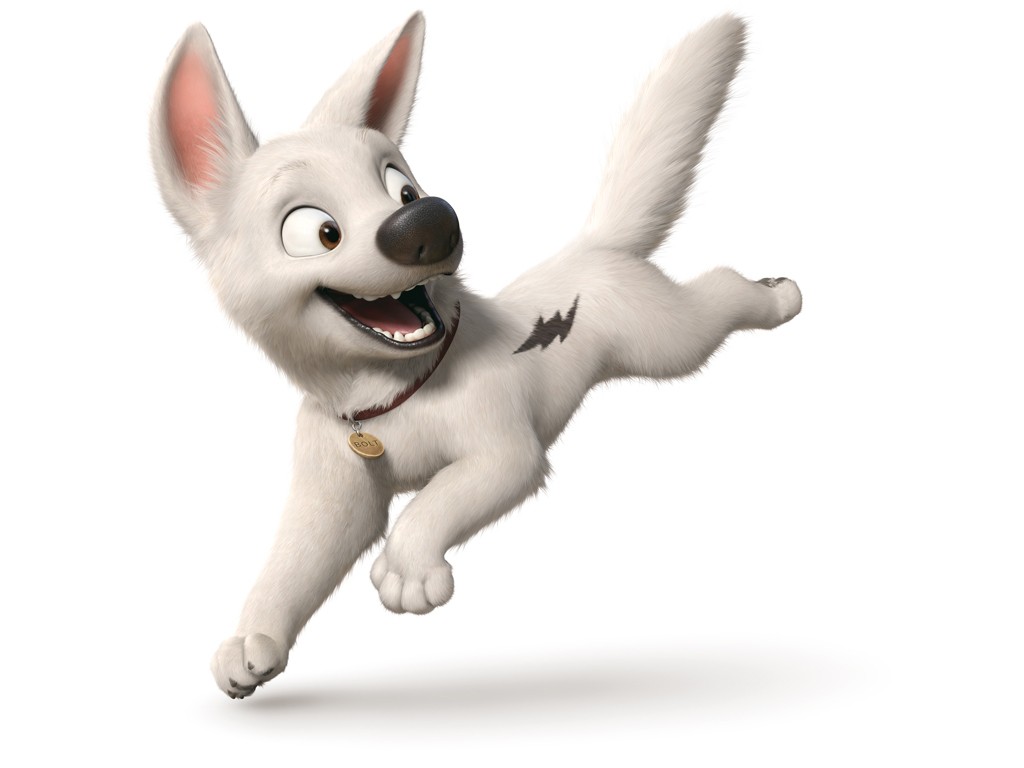 Bolt (the dog) gave me the idea of having my name imprinted on cat fur. But unlike Bolt’s thunder tattoo, I wanted to make the mark more natural so I used the stripes of a tabby cat to spell my name out. I had to try several times because too little contrast would not make the name stand out too much, like such: 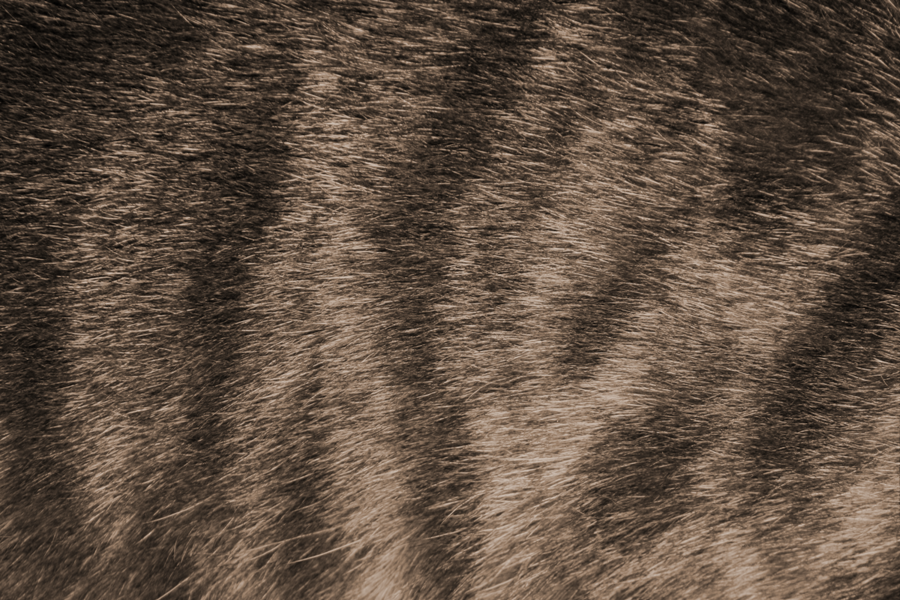 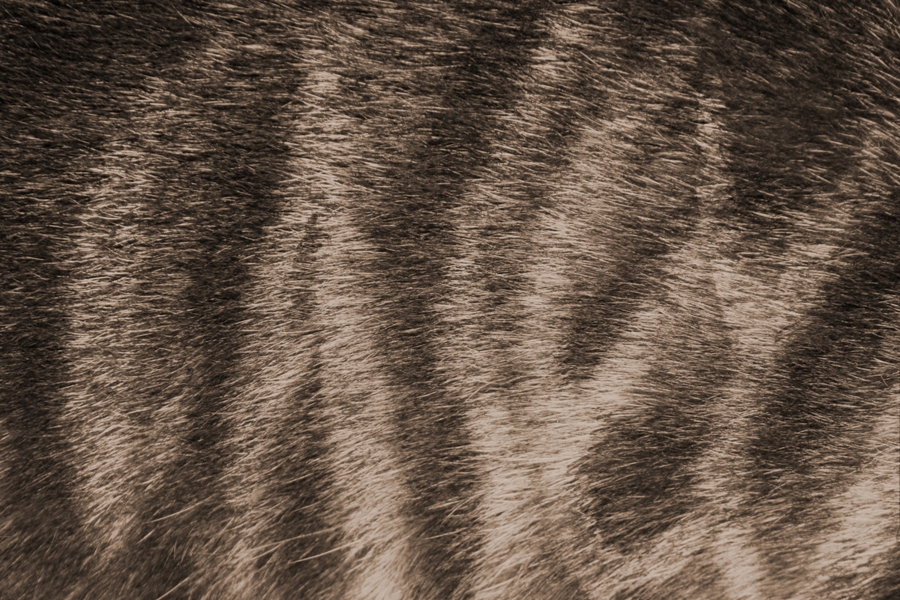 I HAVE SOCIAL ANXIETY

I’m not officially diagnosed yet for this disorder, but a lot of the mental symptoms are there (although I don’t experience a lot of physical symptoms such as excessive sweating or upset stomach) so I have a feeling I might have mild social anxiety. 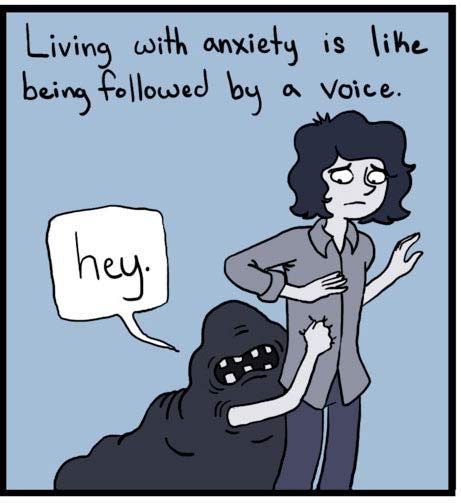 The idea behind social anxiety is that there is always this monster inside your mind clinging onto you, telling you demotivating things that you know are not true but you still listen to it anyway. Inspired by the Oobleck in Dr Seuss’ book, I used white glue and black ink to remake Oobleck. I then arranged it in such a way that it is ‘grabbing’ my name, symbolizing how this monster clings onto me. 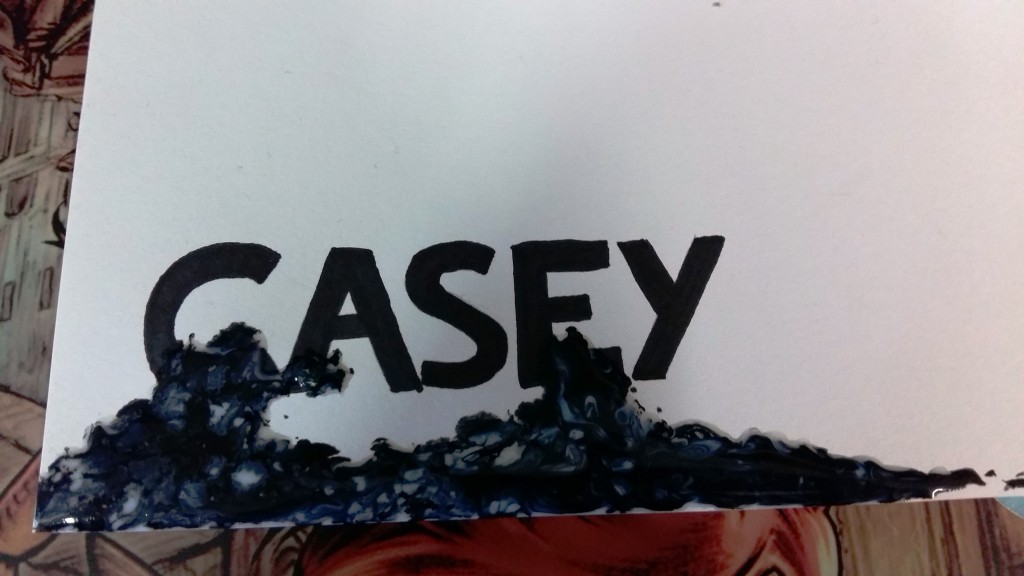 I thought it didn’t look too much like a monster, so I tried to remake it using white glue and corn starch with a little bit of water; also adding the black ink. I also changed the idea to having the monster’s mouth spell out my name, to symbolize that I am being devoured by this monster and am not able to do the things I want to freely. I smeared a bit first on a separate clear PVC sheet and tried spelling my name there to see how it would turn out. The dried up result was what I was looking for. 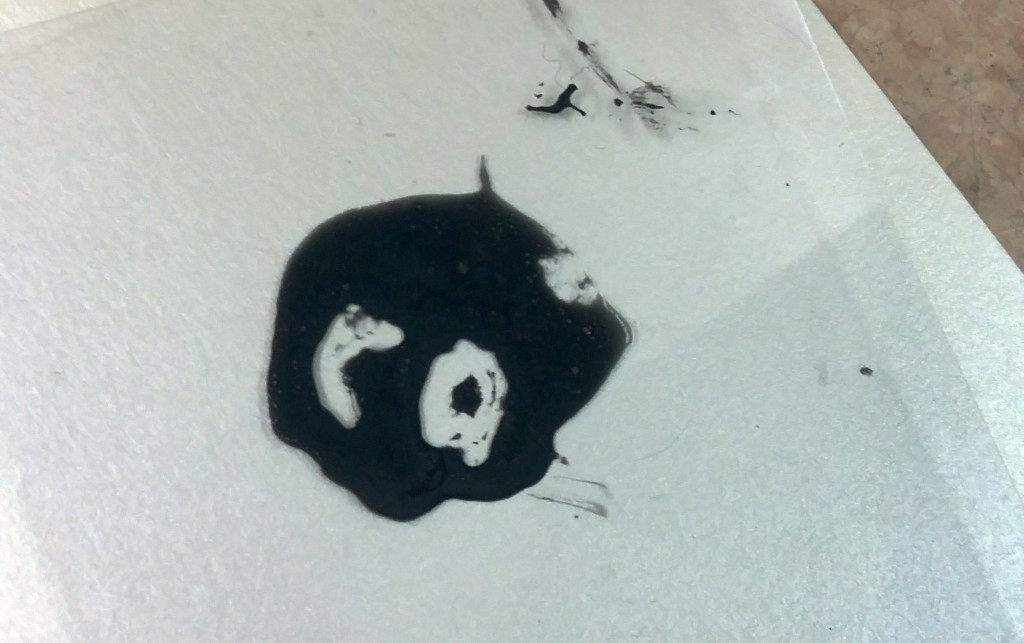 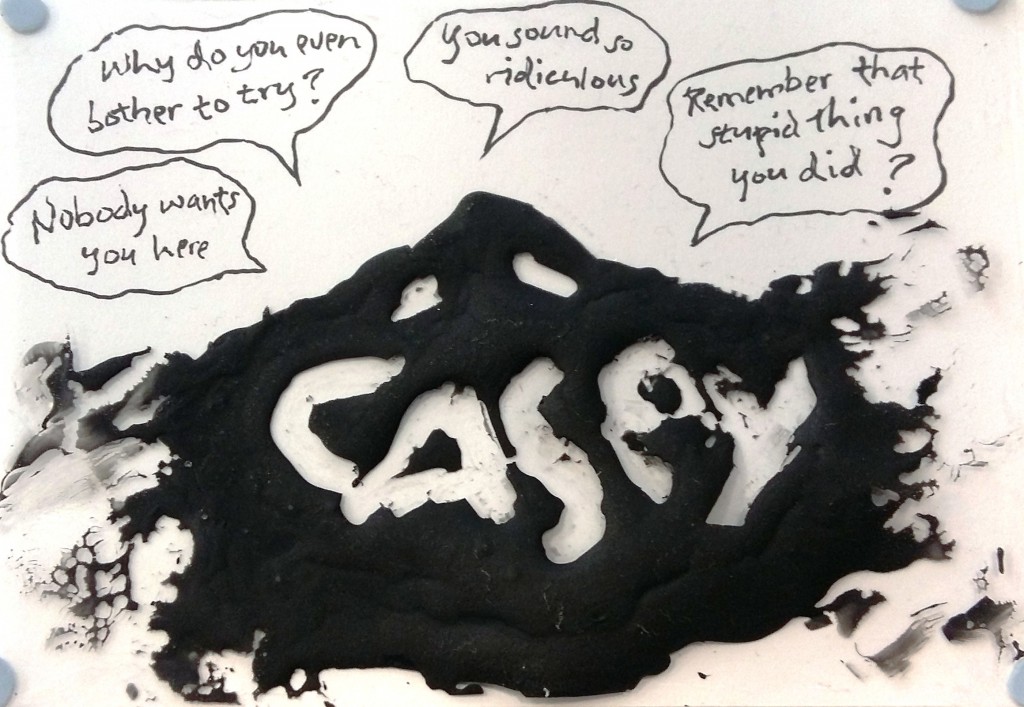