I decided to take this class despite having no background in animating or filming as I was inspired by some of my peers’ works last semester. I spent my first week researching on the different programs in which I could try to start learning—from After Effects to Processing—and I found it difficult to pick one because my knowledge in all the programs are at the same level: zero.

So I resolved to researching on the theme instead: Beyond the Seas.

The Lantern Festival is celebrated on the fifteenth day of the first month, signalling the end of Chinese New Year celebrations. Lighting the lanterns symbolise letting go of one’s past self, praying that they will have a smooth future. The day of lanterns sends the blessing of harmony, order and unity to remain with everyone for the rest of the year.

With the vast screen dimension for Nexus, I would like to play with the depth of field of numerous lanterns moving slowly across a dark background.

Initially I thought of having the lanterns move only upwards (because realistically… that’s how they move). But upon finding this Google Doodle for the Lantern Festival illustrated by the amazing Patrick Leger, I explored the possibility of having them move across the screen instead. That way, instead of a plain black background, the lanterns could be floating over some Southeast Asian cultural heritage sites, such as Candi Borobudur in Indonesia, Gunung Mulu in Malaysia, Ayutthaya in Thailand, and many more. 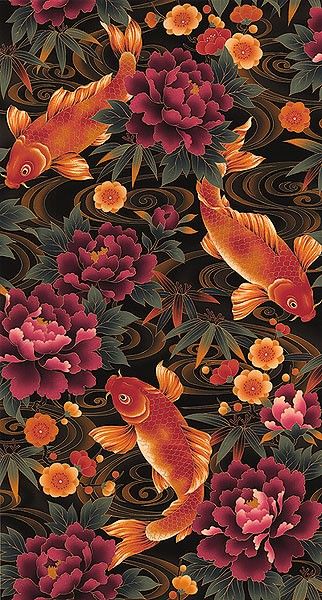 An ancient tale tells the story of a group of golden koi and their perseverance in swimming upstream the Yellow River in China. When they reached a waterfall at the end of the river, many of the koi turned back. However a number of them refused to give up. They kept leaping, and leaping, and after a hundred years of jumping, one koi finally reaches the top. The gods recognised the perseverance and determination of the koi, turning it into a golden dragon.

Because of this legend, the koi fish is known to be a symbol of ambition and perseverance. They also symbolise strength as the koi fish are able to swim against the current. Meanwhile fish in general represent freedom from all restraint. As in the water a fish moves easily in any direction, so in the Buddha-state the fully-emancipated knows no restraints or obstruction.

Inspired by their legend and the koi fish’s symbol of strength and freedom, I think it would be interesting to animate these fish swimming in an urban environment. The contrast between the graceful movements of the fish and the rigid structures of buildings would make a nice exploration.

((some street photography I found of Hong Kong and Japan. Though they are not Southeast Asian, I think their streets are easily recognised and have more identity than other Southeast Asian countries))

((first two are from the game Abzû))

This idea is not related to Southeast Asian (or even Asian) culture, but I’ll just put it here because it seems like an interesting area to explore another time if not on Media Art Nexus. I’ve always wanted to try learning Cinema 4D and playing around with the different texture, as well as how they would interact with each other.

Currently I’m leaning more to the second idea (Koi fish) since I want to try using Cinema 4D to animate it and I’m super excited to learn this program.